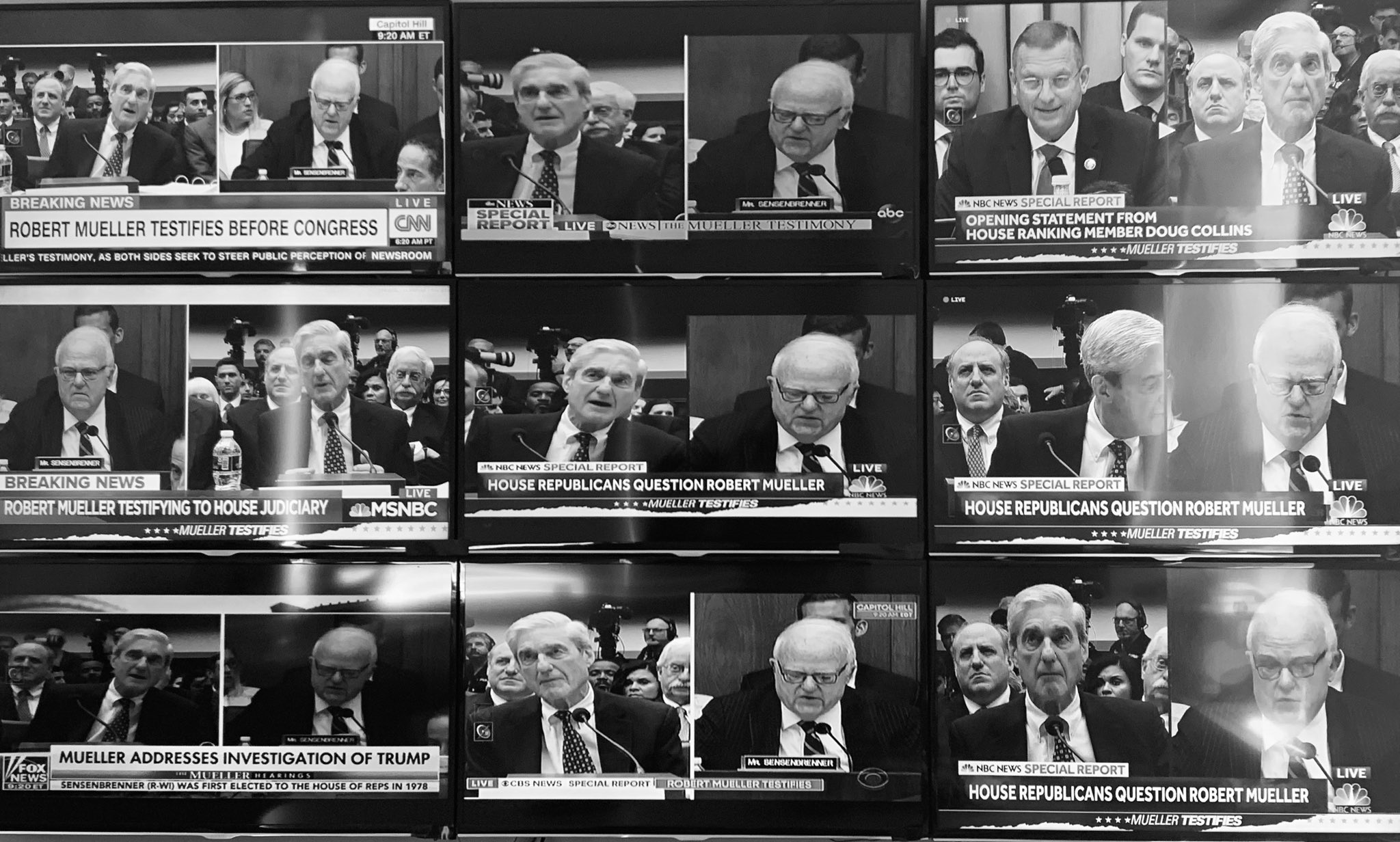 Former special counsel Robert Mueller testified before two House committees over the course of over seven hours yesterday. It was disappointing if you were expecting a “we have tapes” moment from the Watergate hearings, and because of Mueller’s rather tired or shaky demeanor and appearance. The hearings themselves served their purposes in getting Mueller to refute publicly and on the record Trump and his Republicans’ talking points. No exoneration. Yes, there was evidence of collusion and obstruction. Yes, Trump would be charged with those crimes if he were not president. Yes, he can be charged with those crimes after he is no longer President. And yes, Russia interfered significantly in our election to benefit Trump and Trump gleefully accept the help.

The only thing really new that we learned is that the counterintelligence investigation by the FBI into continuing Russian interference in our election system on behalf of Trump is still ongoing.

CNN: “In a closed door meeting Wednesday evening, one House Democrat after another pressed the leadership about impeachment proceedings and asking for clarity on the process for moving forward with a formal inquiry.”

“Although House Speaker Nancy Pelosi continued to indicate that it’s still not time to begin that inquiry, she and House Judiciary Committee Chairman Jerry Nadler did welcome a more detailed discussion among House Democrats eager to know the game plan over impeachment now that Mueller is done with his testimony.”

Josh Marshall: “It is worth noting the essence of the Republican argument is that the President really should not have been investigated since he could not be indicted. And if he must be investigated the public shouldn’t learn anything about what was discovered unless there was an indictment, which of course can’t happen.”

More Josh Marshall: “Among other things, these two hearings illustrate a basic, important point. Obstruction is very important. But the real issue is the collusion, the active encouragement and acceptance of help from a foreign power. In other words, the underlying substance.

President Trump and his campaign encouraged Russian assistance in the 2016; they cooperated with it; they profited from it. The President and his campaign manager were both trying to make cash windfalls in Russia while all this was happening. This is what is important. This is a massive betrayal of country. Whether that amounted to a statute crime is secondary.”

New York Times: “Liberals who support opening impeachment proceedings against Mr. Trump had hoped that testimony by the former special counsel would finally electrify their efforts. The early verdict suggests that did not happen.”

“Mr. Mueller himself clearly did not want to let the term escape his mouth, nor did he provide the kind of shocking new evidence or analysis that would have forced the issue.”

“One Democrat, freshman Representative Lori Trahan of Massachusetts, joined the 90-odd other House members calling for the opening of an impeachment inquiry… Others could follow this week. But with a six-week August recess looming and the views of most Americans fixed on what is now a two-year-old story line, a lasting shift in public opinion appears unlikely.”

“The House Judiciary Committee is preparing to file a lawsuit in the coming days to enforce a subpoena for testimony by former White House counsel Don McGahn, as the panel has so far failed to reach a deal with the White House over a central aspect of his testimony: whether it would be public or private,” the Wall Street Journal reports.

Jonathan Chait: “Mueller’s attempt to place himself above the fray, by refusing to call a crime a crime or to recommend impeachment, became the Republicans’ best evidence against him. His caution allowed a series of Republicans, beginning with William Barr, to mischaracterize his findings. And when he contradicted their lie, they accused him of smearing Trump.”

“Republicans used Mueller’s caution and occasional uncertainty to discredit all the damning facts he produced. In fact, it suggests the opposite point: Mueller did not chase down every possible lead or rule out every possible crime. He never got to the bottom of the nature of the contacts between the two Trump advisers, Stone and Manafort, who worked with Russian cutouts during the campaign.”

“Perhaps Mueller was outwitted, or at least outwilled, by Trump. What does that tell us? That Trump got away with even more than we think.”

The launches, which took place early Thursday morning local time, came from the city of Wonsan on North Korea’s east coast, according to South Korea’s joint chiefs of staff. The projectiles flew approximately 265 miles and splashed down in the Sea of Japan.

No other information is known at the moment. An unnamed defense official told CNN on Wednesday that the shot weapon was a short-range missile, but there’s no official confirmation of that yet.

“A federal judge on Wednesday ordered the Trump administration to continue accepting asylum claims from all eligible migrants arriving in the United States, temporarily thwarting the president’s latest attempt to stanch the flow of migrants crossing the southern border,” the New York Times reports.

“The decision came on the same day that a federal judge in Washington, hearing a separate challenge, let the new rule stand, delivering the administration a win.”

“The Department of Justice won’t prosecute the attorney general or Commerce secretary after the House voted earlier this month to hold them in criminal contempt,” CNN reports.

“Democratic frustrations with the House majority’s oversight of President Trump are beginning to boil over, as longtime party strategists and liberals alike decry what they view as an ineffective effort to hold a lawless president accountable,” the Washington Post reports.

“In more than seven months of investigating Trump, a half-dozen Democratic-led House committees have struggled to unearth major findings, hold high-profile hearings that move public sentiment or follow up on inquiries they laid out when the party took the majority in January.”

“The House Freedom Caucus took an official position Tuesday not to back President Trump’s spending deal and agreement to lift the debt ceiling, citing concerns with its impact on the national debt,” The Hill reports.

Politico: “The band of roughly 30 hard-liners, which includes some of President Donald Trump’s top allies on Capitol Hill, cited fiscal concerns in a statement opposing the agreement. The deal would lift stiff budget caps and raise the debt ceiling for two years, raising federal spending by a total of $320 billion without being fully offset.”

Puerto Rico Gov. Ricardo Rosselló “is expected to resign Wednesday after more than a week of protests that rocked the island’s capital city,” CNNreports.

“Thousands have jammed the streets of San Juan calling for the governor’s resignation after Puerto Rico’s Center for Investigative Journalism published a series of group messages between the governor and his inner circle that included homophobic and misogynistic language and jokes about Hurricane Maria victims.”

“In 2011, with the nation still climbing back from the Great Recession, Republicans threatened global markets by refusing to raise the federal debt limit unless President Barack Obama and the Democrats agreed to steep across-the-board spending cuts for years to come,” the Washington Post reports.

“Eight years later — and $7.7 trillion more in debt — President Trump and GOP lawmakers have agreed this week to lift the debt ceiling again without a fuss, and with hundreds of billions in new spending on top of it.”

“The deal marks a significant capitulation to Trump after years of brinkmanship from Republicans claiming the mantle of fiscal responsibility, underscoring the president’s far-reaching hold over his party and a disregard for the budget-cutting and debt reduction that conservatives long claimed as priorities.”

“The vote reflected broad bipartisan support for Esper — who has spent most of his career in the military and in government — at a time when the country is confronting disparate national security threats and contemplating military engagement with Iran.”