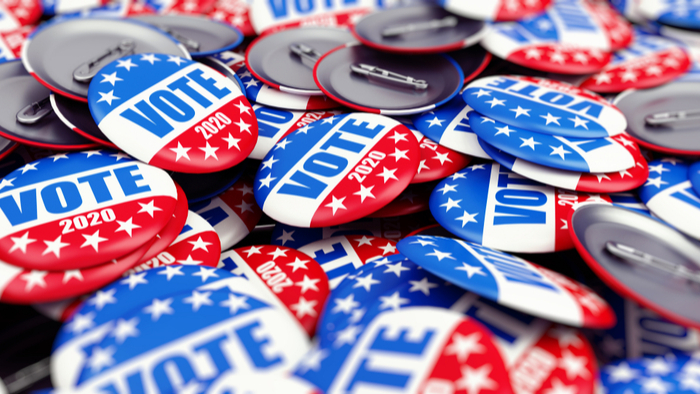 A new Monmouth poll in South Carolina finds Joe Biden leading the Democratic presidential field with 39%, followed by Kamala Harris at 12%, Bernie Sanders at 10%, Elizabeth Warren at 9% and Pete Buttigieg at 5%.

They are followed by Cory Booker and Tom Steyer at 2% each, while Michael Bennet, Amy Klobuchar, and Beto O’Rourke each have 1% support. The remaining 15 candidates included in the poll earn less than 1% or were not chosen by any respondents.

Another 17% of likely voters say they are not leaning toward any candidate in this race.

Alan Abromowitz‘s latest forecast model finds that based on President Trump’s current net approval rating and the current House generic ballot, the Democrats would be likely to make modest gains in the House elections and have a real chance to win control of the Senate.

“According to the most recent averages from FiveThirtyEight, national polls have shown a Democratic advantage of around 6.5 points on the House generic ballot — somewhat similar to the results prior to the 2018 midterm election — and a net approval rating for President Trump of about -10. Those numbers, if they continue into the late summer of 2020, would predict Democratic gains of around five seats in the House and six seats in the Senate.”

“However, there are significant caveats with both projections. Obviously, one of those is that it is very early and that the president’s approval rating and the generic ballot could very well be different late next summer.”

Harris's debate bounce and Biden's debate crash have reverted to the mean a bit, which is pretty much what you should have expected because things like this usually do. https://t.co/pVxQIc0huz

Pete Buttigieg has spent roughly $300,000 on private jet travel this year, more than any other Democrat running for the White House, the APreports.

“Like how the #BeyHive stings, the #KHive is going to sting.” https://t.co/7e9HqGTFYn

Vice News: “One of the party’s largest Super PACs is finally pulling the trigger on a $100 million plan to help boot Trump from office… Priorities USA is planning to flood swing states — many of which have lost their local papers — with stories favorable to the Democratic agenda. Four ‘news’ outlets staffed by Democratic operatives will publish state-specific information across social media in Michigan, Pennsylvania, Florida, and Wisconsin. They’ll also boost content by independent sources.”

McClatchy: “A Washington-based Democratic super PAC has quietly begun running ads as part of a multi-million dollar campaign targeting an unexpected group of Donald Trump’s base: rural voters.” “The ads — a series of promoted posts on Facebook — marked the first visible effort of American Bridge’s $50 million initiative to persuade swing state voters in rural areas to vote for the party’s presidential nominee in 2020.”

Said Weld: “Donald Trump is a raging racist, Okay? He’s a complete and thoroughgoing racist. And he made that choice, a choice a long time ago, when he was engaged in the housing business in New York with his father.”

Ron Brownstein: “Donald Trump’s turn toward more overt racism in his ‘go back’ attacks on four Democratic congresswomen of color rests on an unspoken bet: that the women who are part of his core constituencies will respond to his acrimony as enthusiastically as the men.”

“But polling throughout Trump’s presidency has indicated that his belligerent and divisive style raises more concern among women voters than men in one of his most important cohorts: the white working class. And a new set of focus groups in small-town and rural communities offers fresh evidence that the gender gap over Trump within this bloc is hardening.”

” The donations represent just a fraction of the millions the candidates brought in during the three-month frame. Yet they provide clues about where these well-heeled donors could place their support as the campaign barrels toward the first voting contests of the season, which begin in February.”

Sen. Susan Collins (R-ME) “isn’t used to seeing her popularity under water in her home state, but that’s where the Maine Republican finds herself as she decides whether to run for a fifth term next year,” Bloomberg reports.

“Collins says she’s focused on preparing for a re-election bid but won’t decide until the early fall whether she’ll run.”

Said Collins: “The divisiveness of our country and the unceasing attacks by dark money groups in Maine have clearly had an impact.”