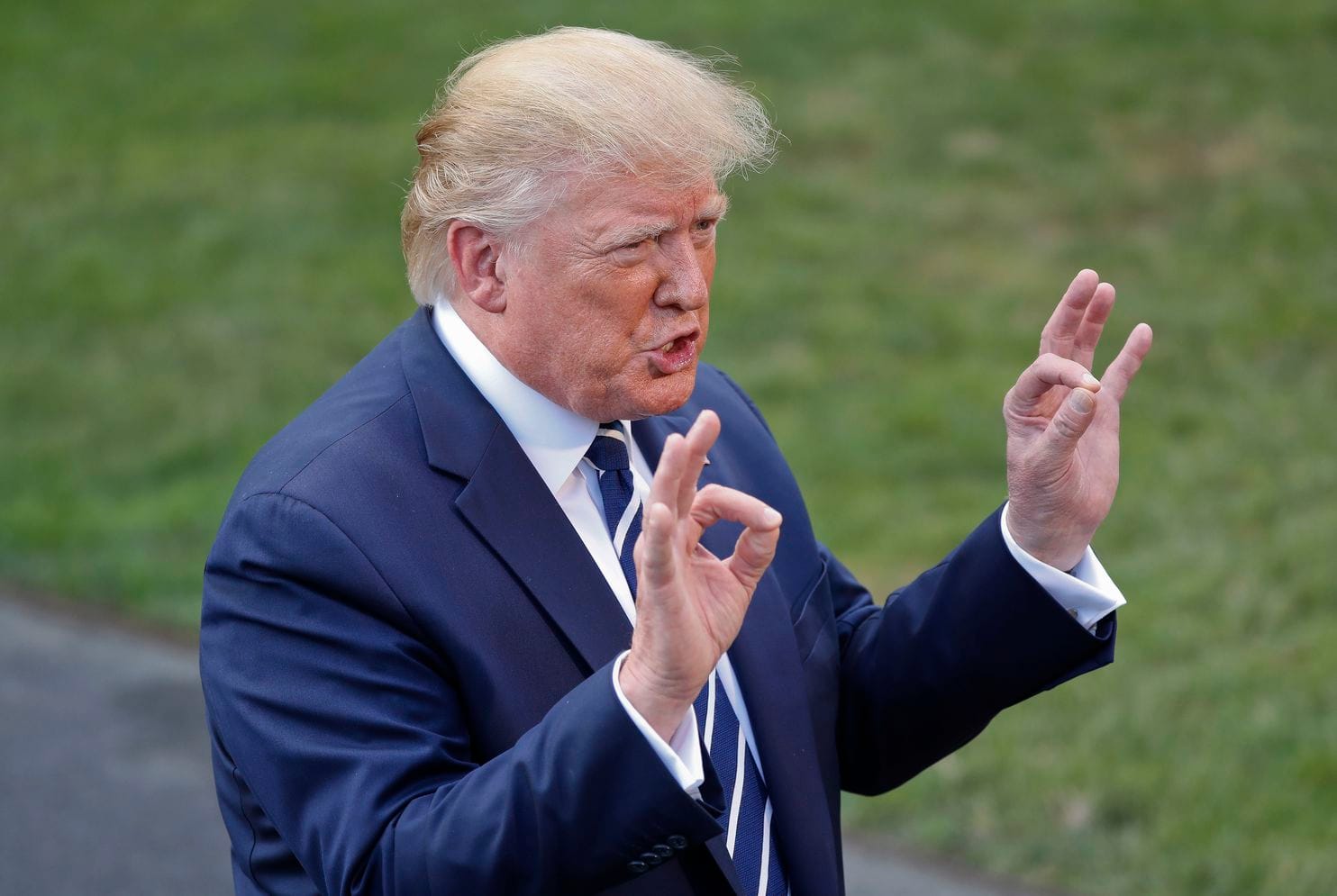 “Robert Mueller has asked that his longtime right-hand aide be sworn in as a witness during Wednesday’s hearing with the House Judiciary Committee about the special counsel’s investigation,” the New York Timesreports.

“Democrats have yet to agree to the request, and Mr. Mueller is the only witness listed for the hearing… It was unclear if Mr. Mueller had made a similar request to the House Intelligence Committee, the panel holding the second of two highly anticipated hearings on Wednesday where Mr. Mueller is scheduled to testify.”

“If the aide, Aaron Zebley, were to take an oath to testify, he could be questioned by lawmakers on the panel, taking pressure off Mr. Mueller to respond to questions he may not be able or want to answer. But his presence would upend carefully laid plans by Democrats and Republicans over how to use their scant time with Mr. Mueller, a reluctant witness known for his concision while under oath.”

Said Nadler: “It’s part of the ongoing coverup by the administration to keep information away from the American people.”

This is an insightful read.

“[C]onservatives have given up trying to make substantive arguments, and have been reduced to a politics centered on trolling liberals. To make it worse, Trump is using this lower-level trolling to train his supporters to equate the identity of ‘conservative’ with pettiness and selfishness, conditioning them so that their first instinct is indifference or even glee when confronted with more serious examples of Trump’s depravity…

“It’s not that conservatives hate sea turtles, per se. It’s more that watching innocent animals suffer makes liberals cry, and making liberals cry is the central motivating force of modern conservatism. (At this point, it’s almost the only one.) So contributing to the suffering of sea turtles, by osmosis, has become a conservative value.”

“The Trump administration on Tuesday will significantly expand its power to quickly deport undocumented immigrants who have illegally entered the United States within the past two years, using a fast-track deportation process that bypasses immigration judges,” the Washington Post reports.

“Officials are calling the new strategy, which will take effect immediately, a ‘necessary response’ to the influx of Central Americans and others at the southern border. It will allow immigration authorities to quickly remove immigrants from anywhere they encounter them across the United States, and they expect the approach will help alleviate the nation’s immigration-court backlog and free up space in Immigration and Customs Enforcement jails.”

Wall Street Journal: “Advocates for immigrants have vowed to challenge the Trump initiatives in the courts.”

FBI Director Christopher Wray admitted that he hasn’t “read every single word” of the Mueller report, CBS News reports. “That puts Wray on the list of top government officials who have said they didn’t real all, or any, of the special counsel’s findings on Russian election interference and President Trump’s 2016 campaign.” Said Wray: “I’ve reviewed it. I wouldn’t say I’ve read every single word.”

“Cesar Sayoc pleaded guilty in March to mailing improvised explosive devices to 13 people, including many prominent Democratic figures…And now his lawyers have filed a sentencing memo citing one of the sources of his radicalization: Fox News,” the Washington Post reports.

The Senate has finally passed the September 11th Victim Compensation Fund Act, by a vote of 97-2. The two votes against were from Republicans Rand Paul and Mike Lee, for whom no tax cut is out of bounds, but who think the survivors of the 9/11 attacks have it too easy, apparently.

CNN: “Trump has spent the last several days on the phone and in conversation with aides and allies discussing Mueller’s upcoming testimony… Instead of anxiety, the President has expressed irritation at having to watch the man who has shadowed his presidency sit down before two congressional committees Wednesday.”

The Atlantic: “Garnaat’s words are worth considering ahead of tomorrow morning, when Mueller is scheduled to testify publicly before the House Judiciary Committee and the House Intelligence Committee. Her words represent a perception gap distilled, a tidy summary of how many Americans navigated the space between commentary on the Mueller report and the report itself. They underscore just how successfully Attorney General William Barr exploited that space, harnessing the power of television to set the narrative of the report, knowing most people were unlikely to read it themselves. And they affirm the challenge Democrats face tomorrow in their attempt to make Mueller’s words resonate when, in an era defined by the laws of entertainment, they may well have missed their moment.”

“Indeed, it was not so much what Barr said those days as it was that he was the first to say it. In the Trump era, most stories have a day- or even an hour-long shelf life, meaning the immediate spin on the most crucial of events is often the one most likely to stick.”

New York Times: “History will record last week as a moment when President Trump turned to raw racial appeals to attack a group of nonwhite lawmakers, but his attacks also underscored a remarkable fact of his first term: His rhetorical appeals to white working-class voters have not been matched by legislative accomplishments aimed at their economic interests.”

“Since he became president, Mr. Trump has largely operated as a conventional Republican, signing taxes that benefit high-end earners and companies, rolling back regulations on corporations and appointing administration officials and judges with deep roots in the conservative movement. His approach has delighted much of the political right.”

Politico: “With a new bipartisan budget deal that does nothing to cut federal spending, Trump is on track for another $1 trillion deficit this year. And there’s no reason to believe the following fiscal year will be any different, with ballooning deficits from higher spending, the 2017 tax cuts — Trump’s signature legislative achievement, which slashed revenue — and none of the entitlement reforms long preached by Republican leaders on Capitol Hill.”

“Candidate Trump bragged that he would pay off the entire federal debt in eight years, but President Trump is governing as if deficits don’t matter.”

New York Times: “In the first Obama term, which included a large government stimulus package to jump-start job creation in the depths of the recession, discretionary spending on military and domestic items rose by about 3 percent per year, on average. In his second term, such spending declined by an annual average of nearly 2 percent.”

“Mr. Trump is currently on pace to increase discretionary spending by an average of nearly 4 percent per year.”

Playbook: “Capitol Hill has reached a budget deal. We say it like that because we do not yet have definitive evidence that President Trump is supporting this agreement. He tweeted that he was ‘pleased to announce that a deal has been struck’ and said it was a ‘real compromise in order to give another big victory to our Great Military and Vets!’”

“But the tweets from Trump did not explicitly say he supported it — and in this era of governing, that matters, because one person speaks for the president, and that’s him. (You might notice that press releases from folks like House Minority Leader Kevin McCarthy did not say they would support the bill — a nod to the fact that Trump could change his mind.) The leadership in both parties had expected a more forceful endorsement from Trump, several sources told us.”

In wide-ranging testimony before the Senate Judiciary Committee this morning, FBI Director Chris Wray told the assembled senators that the FBI has made roughly 100 domestic terrorism arrests this year. The “majority” of those arrested were “motivated by some version of what you might call white supremacist violence.” This is an increase from last year; so far this year, the FBI has made “about the same number” of domestic and international terrorism arrests, said Wray.

“Boris Johnson will become Britain’s next prime minister after being elected leader of the Conservative party, defeating Jeremy Hunt in the party’s leadership contest,” the Guardian reports.

“Johnson will not take office formally until Wednesday afternoon. Theresa May will face her final prime minister’s questions in the House of Commons before tendering her resignation to the Queen.”

“Johnson will then go to Buckingham Palace himself for his appointment to be confirmed – before being driven to Downing Street to give a speech in front of the black door of No 10.”

The Financial Times notes Johnson “stands to inherit a party deeply divided on Brexit, its parliamentary majority on the brink of disappearing, and MPs on alert for an early general election.”

John Harwood: “Having failed to repeal Obamacare, President Trump and his party now plan to surrender their own achievement: budget caps Republicans once forced on President Barack Obama.”

“Neither their retreat nor the customary conservative protests surprise anyone. Republicans have backed away from those caps repeatedly in recent years because, when translated from numbers on a page to actual reductions in government services, they repel decision-makers of both parties.”

“But this latest concession tells the same story that Obamacare’s resilience does: of a 21st century GOP publicly-wedded to ideological commitments it lacks the political support to fulfill. Democratic leaders keep prevailing in budget negotiations by defending things that Americans want.”

CBS News: “The Trump administration is proposing a rule that would limit Americans’ access to food stamps, reportedly removing more than 3 million people from the federal program. The plan would eliminate automatic enrollment in food stamps for poor families who receive welfare benefits.”

“President Trump sued the U.S. House Ways and Means Committee and New York state officials on Tuesday, seeking to protect his state tax returns from being turned over to the congressional committee,” the Wall Street Journal reports.

“The lawsuit, filed in federal court in Washington, seeks an injunction that would block the application of a new New York state law, which enables the Ways and Means Committee chairman to obtain Mr. Trump’s state tax records.”

“Nunes, who grabbed national attention with his controversial allegations of Obama administration surveillance abuses, met with Trump and other senior White House officials last week to discuss who could take over for Coats at the Office of Director of National Intelligence.”

President Trump touted a secret plan to win the war in Afghanistan “in a week” at a tremendous cost to life, but insisted he would rather work with regional partners to “extricate” U.S. troops and bring to a close the nearly two-decade-long military conflict, Politico reports.

Said Trump: “If we wanted to fight a war in Afghanistan and win it, I could win that war in a week. I just don’t want to kill 10 million people.”