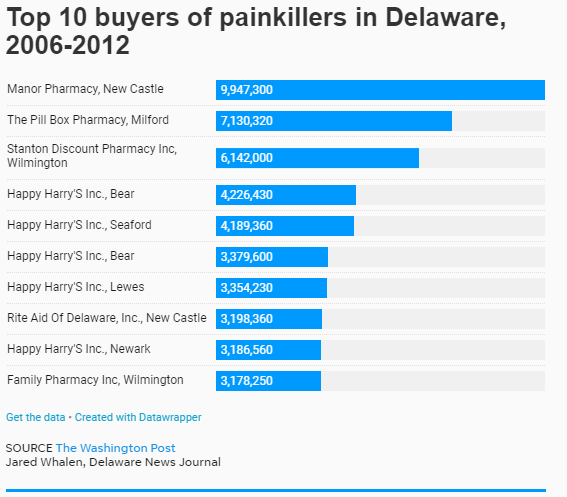 This kind of disclosure reveals the true villains of the opioid epidemic in this country: prescribing doctors and drug companies.

Manor Pharmacy is not alone. From the News Journal:

From 2006 through 2012, nearly 300 million painkillers were shipped into Delaware according to a Drug Enforcement Administration database published this week by The Washington Post. If those 276,177,276 pills were distributed equally, that would be 286 pills for every Delawarean.

The data set, known as ARCOS, tracks the journey of every single prescription painkiller in the United States, starting with the manufacturer that produced it all the way to the pharmacy that purchased it. The data offers an unprecedented view of the rise in sales of prescription painkillers that fueled the opioid epidemic.

Such an increase in the availability of the prescription painkillers resulted in an 400% increase in opioid overdoses resulting in death. Yeah, may those who opposed the Opioid tax this past session burn in Hell.

14 comments on “What is going on at Manor Pharmacy in New Castle?”