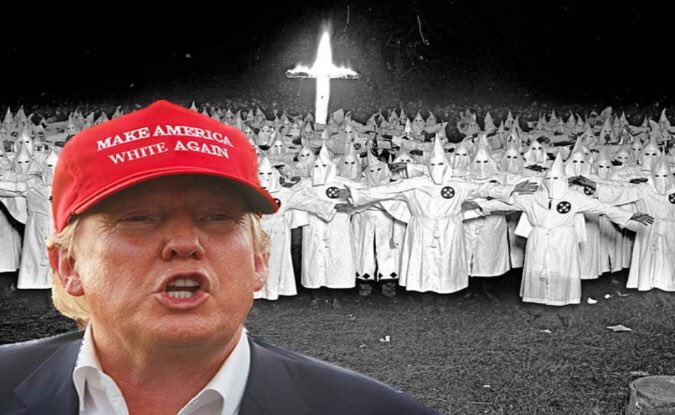 TRUMP LIES TO CLEAN UP HIS FASCIST AND RACIST RALLY. President Trump told reporters that he disagreed with the “send her back” chant directed at Rep. Ilhan Omar (D-MN) at his campaign rally last night, saying, “I was not happy with it — I disagreed with it,” the Washington Post reports.

He was pressed on why he didn’t stop the chant and responded, “I think I did — I started speaking very quickly.” All of this were lies by Trump, as the video of the event clearly showed the President pausing to enjoy the chant and to allow it to grow louder, and later in the Nuremberg Rally, he encouraged the chant again. Further, his daughter in law, Lara Trump, who introduced him, performed a scripted call and answer chant telling those who disagree with Trump to leave.

The real reason for this lie? “A reelection campaign dominated by incendiary chants of ‘send her back’ is a worst-case scenario for President Trump, warn senior Republicans who are moving swiftly to douse a political prairie fire sparked by the commander-in-chief’s use of the mantra to attack some Democrats in Congress,” the Washington Examiner reports.

“The rhetoric reeks of xenophobia and threatens Trump with key voters in critical 2020 battlegrounds.”

“Most Republicans in Congress did not publicly denounce the president… But these same Republicans were so alarmed by the ‘send her back’ chants… they made a special plea to Vice President Mike Pence to stop it from happening again.”

Adam Serwer: “Omar must be defended, but not because of her views on Israel, gay rights, or progressive taxation. You needn’t agree with her on any of those things; in fact, you needn’t like her at all. But she must be defended, because the nature of the president’s attack on her is a threat to all Americans—black or white, Jew or Gentile—whose citizenship, whose belonging, might similarly be questioned.”

“This is not about Omar anymore, or the other women of color who have been told by this president to ‘go back’ to their supposed countries of origin. It is about defending the idea that America should be a country for all its people. If multiracial democracy cannot be defended in America, it will not be defended elsewhere. What Americans do now, in the face of this, will define us forever.”

DEMOGRAPHIC DECAY. Axios: “The numbers simply do not lie. America, as a whole, and swing states, in particular, are growing more diverse, more quickly. There is no way Republicans can change birth rates or curb this trend — and there’s not a single demographic megatrend that favors Republicans.”

“President Trump’s short-term calculation to stir up white voters with race-baiting rhetoric might very well echo for a generation.”

Jonathan Chait: “After President Trump made racist attacks on left-wing Democrats, his supporters engaged in frantic historical revisionism. Trump was not calling his non-white targets foreign or denying their Americanness, they insisted. He merely noted that they may wish to emigrate given their deep ideological disagreement with the country’s institutions and political character.”

“Wednesday night, Trump dispensed with that pretense. After a long and almost entirely dishonest attack on Ilhan Omar, his crowd began echoing Trump’s infamous words, chanting, ‘Send her back!’”

“While most the the party apparatus is committed to the pretense that Trump was merely inviting left-wing America-haters to move to a more congenial place, Trump and his crowd are perfectly aware of what he meant. ‘Send her back’ is not describing voluntary emigration.”

BUDGET DEAL? Treasury Secretary Steven Mnuchin said he and congressional leaders have “reached an agreement’”on overall spending levels in a two-year deal to raise the budget caps, in addition to settling on a two-year debt limit increase, Politico reports.

Playbook: “There are high-ranking officials in the White House who seem to be trying to kill this deal. They are downplaying the potential for a compromise coming together, and saying it is not as close as everyone thinks. Furthermore, senior Republican sources on Capitol Hill said today that this deal is not good for the GOP, and the White House and Pelosi are not as close as everyone lets on. It’s tough to keep track of what’s what with this crew, but there’s a lot of noise.”

Elaina Plott: “Since joining her father’s White House as a senior adviser in early 2017, the first daughter has reserved the right to toggle between a strict and loose construction of her portfolio. When flashy opportunities arise—such as the chance to play diplomat with Kim Jong Un—the edges of her purview, which she often defines as ‘women’s economic empowerment,’ become conveniently blurry. But when the issue du jour is particularly messy, she is quick to clarify its limits, thus absolving herself of accountability for problems that exist outside it. When The View’s Abby Huntsman, for example, asked Trump in February why she didn’t speak up about family separations along the U.S.-Mexico border, she objected that she is ‘not president of all women’s issues.’”

“This awkward dance underscores the true nature of Trump’s silence on a flurry of new controversies surrounding her father: She is declining to speak out not because of the limits of her portfolio. She simply does not want to.”

Said one former White House official: “It’s an exclusive club. People who want to be in charge of everything, but when the going gets weird, just disappear.”

ISRAEL TO BAR OMAR? “A government official told The Jerusalem Post on Thursday that Prime Minister Benjamin Netanyahu’s National Security Council was reviewing the issue and would offer him recommendations on how to respond.”

“According to the dry law, Omar, whose legislation explicitly calls for the boycott of Israel, could be denied entry to Israel. However, due to her status as a US congresswoman, Israel is unlikely to use the legislation which if done, could spark an international crisis.”

Playbook: “We’s have to imagine Trump would be pretty pleased if his friend and ally Benjamin Netanyahu declined to allow Omar and Tlaib — the president’s enemies, at the moment — into Israel. This could cause a diplomatic row, though, since Omar and Tlaib are elected federal officials.”

CUCINELLI ASCENDANT. Politico: “The outspoken immigration hard-liner enjoys a direct pipeline to Trump, according to four people briefed on the arrangement, and has met multiple times with the president and with White House senior adviser Stephen Miller to discuss the administration’s plans to stem the tide of migrants across the U.S. border.”

“Ken Cuccinelli, who has also spoken with Trump by phone, has been told he’ll be involved with top immigration decisions, even those that are outside the scope of his agency.”

“The newly formed relationship is so tight that Cuccinelli’s boss, acting Homeland Security Secretary Kevin McAleenan, was not even aware of the meetings with Trump, one of the people said. It’s an extraordinary position of power for an official with little relevant policy experience and whose job is to run an agency responsible for processing immigration paperwork and vetting asylum applicants, not border enforcement.”

IRAN ESCALATION. Politico: “Trump has repeatedly urged Iran to engage in negotiations with him, while saying that Tehran’s nuclear ambitions are his chief concern … His aides and allies, meanwhile, have recently suggested that Iran and other countries should follow the guidelines of a deal they themselves have shunned as worthless.”

“At times, analysts and former officials say, it sounds like Trump wants to strike a deal that essentially mirrors the agreement that his White House predecessor inked — even if he’d never be willing to admit it. Iranian officials seem willing to egg him on. … The administration’s confusing messaging is a result of warring between two major factions, U.S. officials say, with Trump in his own separate lane.”

So Trump wants to essentially reinstate the Obama Deal, but then today happened. President Trump said that the U.S.S. Boxer, operating in the Strait of Hormuz, shot down an Iranian drone that he said had approached within 1,000 yards and ignored calls to stand down, Axios reports. He said the drone was “immediately destroyed.”

Matthew Yglesias: “It’s wrong to characterize the racist incitement as a ‘distraction’ since it is important on its own terms. But it is worth understanding that there is a controversial aspect of the Trump administration that Trump is happy to talk about — the racist aspect — and then there is a whole other set of controversies lurking hidden below the water line that Trump doesn’t like to talk about.”

“In the fight Trump wants to have, he casts himself as a champion of the typical white American Christian who is beset by various alien forces and politically correct elites. But when you bring the entire iceberg into view, you see a version of Trump that is much more reflective of Trump’s entire business career — a scam artist who profits off the misplaced trust of his fans just as much as anything else.”

JON STEWART V. RAND PAUL. Comedian Jon Stewart blasted Sen. Rand Paul (R-KY) on Fox News for his objection to a bipartisan bill to ensure a compensation fund for victims of the 2001 terrorist attacks never runs out of money.

Said Stewart: “Pardon me if I’m not impressed in any way by Rand Paul’s fiscal responsibility virtue signaling.” He pointed out that Paul supported President Trump’s tax cut that “added hundreds of billions of dollars to our deficit.”

DEMOCRATIC DE-ESCALATION. “House Democrats are moving to quiet the searing internal feud that threatened to spin out of control last week — starting with the deletion of explosive tweets that helped spark the infighting and a joint statement of unity,” the Washington Post reports.

“The detente is expected to continue next week, with House Speaker Nancy Pelosi (D-CA) tentatively scheduled to meet Thursday with Rep. Alexandria Ocasio-Cortez (D-NY) — the most prominent member of the four-member ‘Squad’ of liberal freshman female lawmakers.”

One Democratic aide called it a “collective de-escalation.”

Said Scaramucci: “They won last time, so it may be a winning campaign strategy, but it is against the idealistic values of America.”

He added: “It’s such a turnoff to a large group of people that you are running a risk that 15 percent of the people that you want to get you through that electoral map and back into the presidency say, ‘You know what? I love the policies, but I don’t like the ‘send her back’ rhetoric. I don’t like the racist rhetoric of sending people back to the homes that they came from.’”

DEFENSE CONTRACTOR THREATENED TO KILL CONGRESSMAN OVER VACCINATIONS. “A Pentagon cybersecurity contractor has been charged with threatening to kill a member of Congress over the introduction of a bill that would require public schools to vaccinate children,” the Daily Beast reports.

From the contractor’s voicemail: “I’m gonna kill your ass if you do that bill. I swear. I will fucking come down and kill your fucking ass. And you’re a Congressperson, that’s fine. I hope the fucking FBI, CIA and everybody else hears this shit.”

PARTYING WITH EPSTEIN. Washington Post: “Footage of that party, unearthed and aired by NBC News on Wednesday, shows Trump grabbing dancing cheerleaders and socializing with financier Jeffrey Epstein, who was arrested last week and charged with sex trafficking…”

“Trump’s interactions with women at the Mar-a-Lago party — welcome or not — provide visual evidence of the kind of behavior he would later brag about on a 2005 Access Hollywood recording that surfaced at the end of the presidential campaign: that he could grab and kiss women because he was a celebrity.”

“In the footage of the November 1992 party, Trump can be seen putting his arm around the waist of one of the women, yanking her toward him and patting her on the backside as she laughs.”