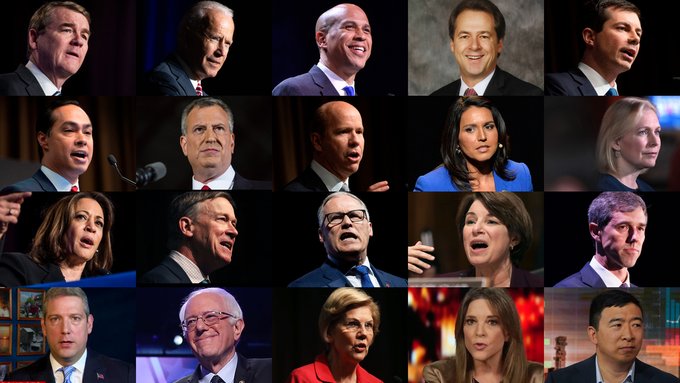 A new NBC News-Survey Money poll finds Joe Biden leads the Democratic presidential field with 25%, followed by Bernie Sanders at 16%, Elizabeth Warren at 16%, Kamala Harris at 14% and Pete Buttigieg at 8%.

Former Texas Rep. Beto O’Rourke and Sen. Cory Booker of New Jersey each snared 3 percent, while the rest of the 24 person field came in at 2 percent or less.

Joe Biden and Sen. Kamala Harris, who clashed at the first Democratic debate, will face off again on July 31, leaving the ideologically aligned Sen. Bernie Sanders and Sen. Elizabeth Warren to appear together on July 30.

A new Morning Consult poll finds Senate Majority Leader Mitch McConnell (R-KY) is America’s most unpopular senator with voters in his state with a 50% disapproval rating, with Sen. Susan Collins (R-ME) coming in as a close runner-up at 48%.

By contrast, the poll shows Sen. Angus King (I-ME) and Bernie Sanders (I-VT) leading the list of most popular senators with an overall 62% job approval rating.

“Unionized campaign organizers working for Sen. Bernie Sanders’s presidential effort are battling with its management, arguing that the compensation and treatment they are receiving does not meet the standards Sanders espouses in his rhetoric,” the Washington Post reports.

“Campaign field hires have demanded an annual salary they say would be equivalent to a $15-an-hour wage, which Sanders for years has said should be the federal minimum. The organizers and other employees supporting them have invoked the senator’s words and principles in making their case to campaign manager Faiz Shakir.”

Sen. Bernie Sanders “defended his campaign’s compensation package Friday after a Washington Post story highlighted concerns among staffers that they were not receiving the $15-an-hour wages Sanders champions on the campaign trail,” the Des Moines Register reports.

But he also expressed frustration: “It does bother me that people are going outside of the process and going to the media. That is really not acceptable. It is really not what labor negotiations are about, and it’s improper.”

New York Times: “There are fierce rivalries, long-tangled histories, deeply personal grudges — and in the end, only one winner can hold the rose.”

“No, this isn’t The Bachelor. But the Democratic presidential candidates are taking part in the latest installment of a storied tradition of American politics: They are aiming to outwit, outplay and outlast a field of rivals in a campaign so far defined partly by its theatrics and big moments.”

“From the heavily rehearsed jabs, gimmicks and one-liners at the June debates to the elaborately staged ‘live drawing’ for the July debate lineups that aired Thursday night on CNN, it’s starting to look like Democrats have been drawn into the reality TV genre that President Trump, who first entered most homes as a character on The Apprentice, started spreading in American politics.”

Jonathan Bernstein: “The lineups are set for the next round of Democratic debates, and the media seems to be settling on a storyline. There are four candidates who matter, the story goes: Bernie Sanders and Elizabeth Warren, who will meet on July 30, and Joe Biden and Kamala Harris, who will face off the next night. Oh, and eight other candidates will be on stage each night, but all of them, with the possible exception of Pete Buttigieg, are no longer serious contenders.”

“Those candidates were the top five in second-quarter fundraising, after all, and they sit in the top five spots in national polls. It’s true that usually, by this point in the campaign, that group will include the eventual nominee.”

“And yet… I’m far from convinced that those are the five most likely to win, or that only five have a reasonable chance.  I’m not sure that ‘usually’ applies to this cycle, mainly because of the mix of candidates. Each of the leaders has significant vulnerabilities – and some of the contenders who haven’t fired in the polls yet have assets that could yet matter.”

A good overview from First Read:

The battle on the left: In June, Sanders and Warren appeared on different nights, giving each the opportunity to stake out ground on the left. Competitors seemed particularly reluctant to criticize Warren, which allowed her to occupy that space virtually unscathed on the first night of the first debate. But with Sanders losing ground in recent polls — and Warren rising in both polls and fundraising — both may be eager to create some differentiation between their brands when they share a stage.

Biden v. Harris, round two: By far, the most memorable exchange of the first debates was Harris’ damaging attack on Biden over bussing and his past comments about segregationists. Biden didn’t seem well-prepared at all for that onslaught in June, but he’ll have to show he’s ready to revisit racial issues when he shares the stage with her again.

O’Rourke and Buttigieg face off: Mayor Pete Buttigieg’s monster second quarter fundraising haul proved what we’d already had plenty of anecdotal evidence to show — that the South Bend mayor had replaced O’Rourke as the fresh young (white, male) face in the race with a strong donor base and compelling personal story. The two appeared on different nights in June, but Detroit could be O’Rourke’s last best chance to reclaim some of that status (if he still can.)

One new face on the scene: Montana Gov. Steve Bullock will make his debate debut, replacing recent drop-out Eric Swalwell. But his pitch as a middle-of-the-country moderate who can work with Republicans will have competition from plenty of others on the stage who are eager to make a similar argument, including Buttigieg, Klobuchar and Hickenlooper.

Night Two candidates probably have an advantage — again: One thing we learned from the first set of debates was that even a candidate who performs well on Night One (i.e. Warren or Castro) gets a maximum of 24 hours of positive coverage before being overshadowed by Night Two’s news. The burden will be on Night One’s contenders in Detroit to break through in a way that keeps them in the spotlight for as long as possible — especially with looming anticipation for Wednesday’s Biden/Harris rematch.

Nate Cohn says President Trump’s Electoral College edge endures heading into the 2020 presidential election, and it could grow further — potentially allowing him to win the presidency while losing the national vote by 5 points or more.

“Wisconsin was the tipping-point state in 2016, and it seems to hold that distinction now, at least based on the president’s approval rating among 2018 midterm voters.”

“A closer look at the underlying evidence suggests there’s reason to think the president’s ratings could be higher than estimated in the state.”

David Wasserman: “The bulk of the nation’s demographic transformation is taking place in states that matter the least in deciding the Electoral College… In 2020, it’s possible Trump could win 5 million fewer votes than his opponent — and still win a second term.”

Axios suggests President Trump is well-positioned to win re-election based on the strength of the economy based on this statistic: “Every incumbent president since FDR has won if he avoided a recession in the lead-up to an election year.”

“Except that the sample size here is… small. There have been 13 presidents since Franklin Roosevelt. Only three have lost reelection bids, Gerald Ford, Jimmy Carter and George H.W. Bush. There have been seven recessions since 1970, two of which ended in the first quarters of the year before reelection bids (Ford’s and Bush’s). Is that what doomed them? More importantly, does that mean that a president without a recession can’t be defeated?”

A new Public Policy Polling survey in Georgia and North Carolina finds Democrats might have a path to a 2020 victory in the South.

“On July 9, John Delaney’s senior team sat him down and told him to drop out of the presidential race by mid-August, according to three sources close to the campaign,” Axios reports.

“Those close to him think there’s no chance he makes the September debates, which have a harder qualification threshold than the first two. They thought he flopped at the first debate in Miami.”

A common refrain from staffers: “Every other day he would have a different position.”