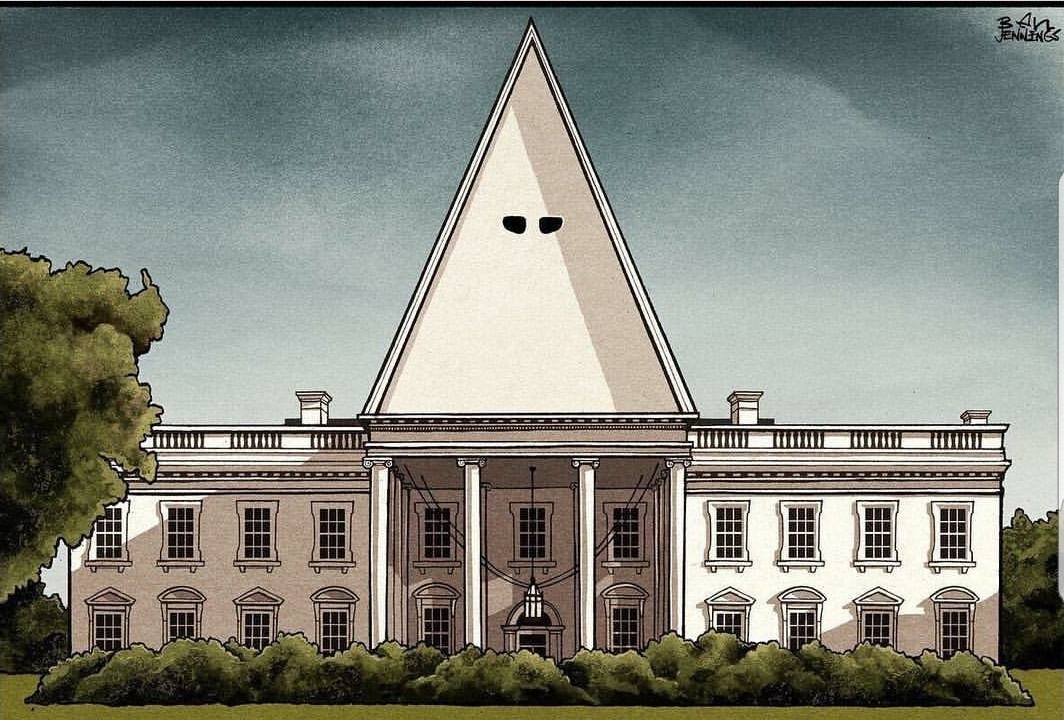 By a near-party line vote of 240-187, the House of Representatives voted this evening to condemn Trump’s racist tweets against Democratic House members. Republican Reps. Will Hurd, Fred Upton, Brian Fitzpatrick, and Susan Brooks crossed to vote with the Democrats, as did now-independent Rep. Justin Amash.

All but four House Republicans voted that Trump’s tweet telling four Democrats, all of whom are women of color, to “go back” to the countries from which they came (all but one are American-born) was not a racist remark. Instead, they used procedural motions to challenge House Speaker Nancy Pelosi and Rep. Eric Swalwell who called Trump’s remarks “racist” in their speeches supporting the resolution.

Before the vote, Rep. John Lewis delivered a blistering speech in support of the resolution. “I know racism when I see it,” said Lewis. “Segregationists told us to ‘go back.'”

“With this vote, we stand with our sisters, three were born in America and one came here looking for a better life,” he continued. “With this vote, we meet our moral obligation to condemn hate, racism, and bigotry in every form.”

Senate Minority Leader Charles Schumer (D-NY) blasted Republicans over the silence with with many have responded to President Trump’s tweets telling four Democratic congresswomen of color to “go back” to their home countries, The Hill reports.

Schumer said Trump’s comments “drip with racism” and questioned if Republicans weren’t commenting “out of embarrassment or agreement.”

Asked Schumer: “Where are you? When something this serious, this bigoted, this un-American happens? If you’re saying to yourself well, he got us our big tax credit, well, he’s taking regulations off big corporations … we have to go along with this racism? You are making a deal with the devil.”

David Remnick: “Republicans and Independents, evangelicals, and many others who might have voted for Trump in 2016 will eventually have to ask themselves whether it is possible to go on believing that he is a man of sufficient character to hold the Presidency. They will have to ask themselves what it means to overlook his racism and what this says about them. How can they believe it is possible to support a racist and escape that in themselves? Or will they pronounce themselves, as the Treasury Secretary, Steven Mnuchin, did, ‘not concerned’?”

“The present moment is never fixed, or not for long. History is in the hands of members of Congress who have the option to collude or impeach, go along or resist; it is in the hands of citizens who can vote or stay at home. In 1989, we lived the illusion of unstoppable democratic advance. Democratic values have since receded. In 2008, we enjoyed the illusion of racial progress. Today, Donald Trump is in the White House.”

Steve Benen: “Party officials who believed they’d help set the party’s direction in the Trump era now realize that power is in the hands of one man: a hapless amateur whose rhetoric on race is too often indistinguishable from the angry, racist drunk at the end of the bar.”

“Republicans aware of their party’s demographic challenges – the party is increasingly dependent on older white voters, in a nation that’s becoming increasingly diverse – no doubt realize that Trump is making a risky electoral bet. But instead of pushing for a smarter strategy, most GOP leaders have effectively surrendered and accepted defeat.”

Greg Sargent: “Central to Trump’s racism — and more broadly to Trumpism writ large — is not just the content of the racism itself. It’s also that he’s asserting the right to engage in public displays of racism without it being called out for what it is.”

Ron Brownstein: “President Trump’s openly racist and xenophobic attacks on four Democratic House women of color, like his threatened immigration enforcement raids in major cities and the sweeping proposed new restrictions on asylum seekers that he announced Monday, underscores his transformation of the Republican Party into a coalition centered on the voters and places in America most hostile to immigration in particular and demographic change in general.”

“This latest flurry of activity continues the drive by Trump and other Republicans elected mostly from the parts of America least touched by immigration to impose a restrictionist agenda on migration over the nearly undivided opposition of Democrats elected by the areas where most immigrants, both undocumented and legal, actually live. Though greeted without complaint by Republicans in Congress, Trump’s promised raids provoked astoundingly open resistance from the mayors of virtually every large American city, from New York and Los Angeles to Chicago and Houston.”

Kellyanne Conway escalated attacks on the four congresswomen who have been the subject of President Trump’s racist tweets, telling Fox Newsthat they represent a “dark underbelly” of the country.

Politico: “The ambush plunged Trump back into a political crisis with his own party, with no coherent GOP response and little apparent coordination between the White House and Republicans on Capitol Hill over how to grapple with Trump’s comments that the liberal lawmakers, all women of color, “go back” to where they came from.”

“Senate GOP leaders briefly discussed the matter on Monday afternoon in a private meeting as they compared their responses to the tweets, according to two attendees. Senate Majority Leader Mitch McConnell gave no indication of how he plans to respond at his weekly news conference on Tuesday.”

“That largely left it up to GOP senators and House members to devise their own responses to Trump’s latest firestorm.”

The Hill: “Most are seeking to steer clear of the firestorm, but a few GOP lawmakers came out against Trump’s suggestion that the four women of color “go back” to their home countries, even though all are U.S. citizens.”

Canadian Prime Minister Justin Trudeau condemned President Trump for telling a group of female minority lawmakers to go back to the “crime infested places” they came from, The Hill reports.

Said Trudeau: “I think Canadians and indeed people around the world know exactly what I think about those particular comments. That is not how we do things in Canada. A Canadian is a Canadian is a Canadian. The diversity of our country is actually one of our greatest strengths and a source of tremendous resilience and pride for Canadians and we will to continue to defend that.”

George Conway: “No, I thought, President Trump was boorish, dim-witted, inarticulate, incoherent, narcissistic and insensitive. He’s a pathetic bully but an equal-opportunity bully — in his uniquely crass and crude manner, he’ll attack anyone he thinks is critical of him. No matter how much I found him ultimately unfit, I still gave him the benefit of the doubt about being a racist. No matter how much I came to dislike him, I didn’t want to think that the president of the United States is a racial bigot.”

“But Sunday left no doubt. Naivete, resentment and outright racism, roiled in a toxic mix, have given us a racist president. Trump could have used vile slurs, including the vilest of them all, and the intent and effect would have been no less clear. Telling four non-white members of Congress — American citizens all, three natural-born — to ‘go back’ to the ‘countries’ they ‘originally came from’? That’s racist to the core. It doesn’t matter what these representatives are for or against — and there’s plenty to criticize them for — it’s beyond the bounds of human decency. For anyone, not least a president.”

Conservative commentator George Will told the New York Times that President Trump is causing lasting damage to the country.

Said Will: “I believe that what this president has done to our culture, to our civic discourse … you cannot unring these bells and you cannot unsay what he has said, and you cannot change that he has now in a very short time made it seem normal for schoolboy taunts and obvious lies to be spun out in a constant stream.” He added: “I think this will do more lasting damage than Richard Nixon’s surreptitious burglaries did.”

Said Meacham: “What the president’s done here is yet again, because I think he did it after Charlottesville, and I think he did it frankly when he was pushing the birther lie about president Obama, is he has joined Andrew Johnson as the most racist president in American history.”

Said Scaramucci: “I don’t think the president is a racist. But here’s the thing, if you continue to say and act in that manner, then we all have to look at him and say, OK, well, maybe you weren’t a racist, but now you’re turning into one.”

Associated Press: “North Korea said Tuesday that upcoming regular summertime U.S.-South Korean military drills are forcing it to rethink whether it should be committed to the promises it has made to the United States. It cited its moratorium on nuclear and missile tests and other steps aimed at improving ties with Washington.”

“The statement said Trump vowed to suspend military drills with South Korea during his first and third meetings with Kim, but the planned summertime drills with Seoul and the deployment of weapons in the South show that Washington is not fulfilling that promise.”

Politico: “House Oversight Chairman Elijah Cummings said Monday that he is expanding an investigation into the use of personal email by Education Secretary Betsy DeVos. Cummings told DeVos in a letter that his move came after ‘disturbing new revelations’ released by the Education Department’s inspector general in May about how DeVos had used personal email while on the job.”

“Speaker Nancy Pelosi late Monday said the House of Representatives would not raise the debt ceiling unless it is part of a broader budget deal, putting extreme pressure on the White House and congressional leaders to cut a deal within days,” the Washington Post reports.

“Pelosi said the idea of raising the debt ceiling on its own and not in conjunction with a budget agreement was not ‘acceptable to our caucus’ and therefore did not stand a chance of passage in the House of Representatives.”

“President Trump on Monday portrayed America as being on the winning end of his trade war, saying tariffs are punishing China’s economy while generating billions of dollars for the United States, an economic victory that will allow him to continue his fight without domestic harm,” the New York Times reports.

“But government figures show that the revenue the United States has collected from tariffs on $250 billion worth of Chinese goods is not enough to cover the cost of the president’s bailout for farmers, let alone compensate the many other industries hurt by trade tensions. The longer Mr. Trump’s dispute with China drags on, the more difficult it could be for him to ignore that gap.”

“A federal judge on Tuesday issued an order prohibiting Roger Stone, a longtime ally and adviser of President Trump, from posting anything on Instagram, Facebook, or Twitter after finding he violated her previous order limiting what he could say publicly about his case,” BuzzFeed News reports.