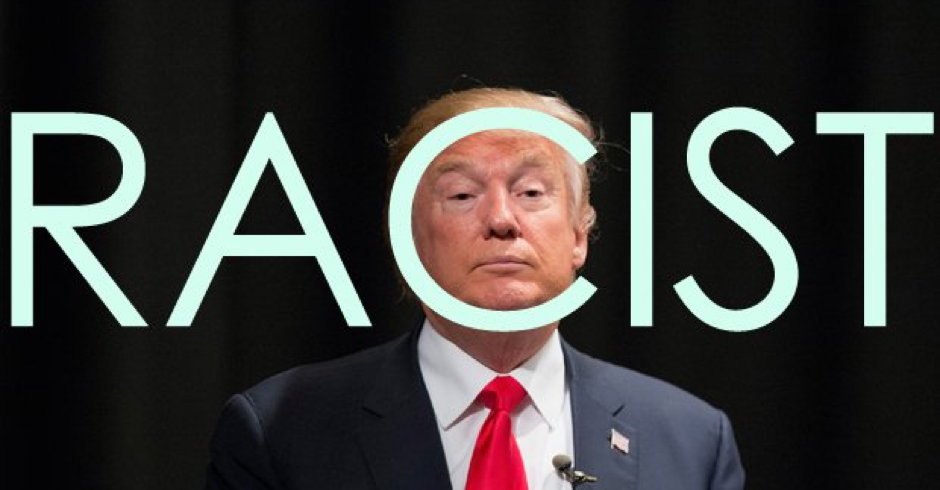 “Under fire for what many called racist tweets, President Trump said Monday that the minority Democratic congresswomen he said should ‘go back’ to other countries are the ones who should apologize,” USA Today reports. Hey Trump, we are so sorry that you are so racist.

Said Trump: “When will the Radical Left Congresswomen apologize to our Country, the people of Israel and even to the Office of the President, for the foul language they have used, and the terrible things they have said. So many people are angry at them & their horrible & disgusting actions!” “He did not detail those alleged actions.”

Speaker Nancy Pelosi (D-CA) said in a letter to colleagues Monday that “the House cannot allow the President’s characterization of immigrants to our country to stand. Our Republican colleagues must join us in condemning the President’s xenophobic tweets.” The timing of the vote is uncertain.

Sen. Lindsey Graham (R-SC), one of President Trump’s strongest allies on Capitol Hill, declined on Monday to condemn the President over his racist tweets against several minority members of Congress, instead calling them a “bunch of communists,” CNN reports. Said Graham: “We all know that this crowd are a bunch of communists, they hate Israel, they hate our own country. They’re calling the guards along our border, the border patrol agents, ‘concentration camp guards.’ They accuse people who support Israel of doing it for the Benjamins. They’re anti-Semitic. They’re anti-America.”

Rep. Andy Harris (R-MD) defended President Trump‘s tweets calling on a group of House freshman to “go back” to their countries, telling WBAL that they were not racist. Said Harris: “No they’re not, they’re obviously not racist. But again, when anyone disagrees with someone now the default is to call them a racist, and this no exception.”

Rep. Ted Lieu (D-CA) called President Trump “a racist ass” over a series of tweets attacking four non-white progressive female lawmakers, The Hill reports. Said Lieu: “I never thought I’d see the day when a president was telling immigrants to go back to where we came from. Donald Trump is demonstrating he’s a racist ass. He’s not uniting us. I can’t wait until he leaves the office of the presidency.”

“President Trump has told aides and allies that he is considering removing Commerce Secretary Wilbur Ross after a stinging Supreme Court defeat on adding a citizenship question to the census,” NBC News reports.

“While Trump has previously expressed frustration with the 81-year-old Ross, in particular over failed trade negotiations, Ross’s long personal relationship with the president has allowed him to keep his job. And after the departure of Labor Secretary Alex Acosta, the Cabinet’s only Hispanic who resigned on Friday amid questions about his role in a controversial 2008 plea agreement with sex offender Jeffrey Epstein, Ross may yet receive another reprieve.”

“But some White House officials expect Ross to be the next Cabinet secretary to depart, possibly as soon as this summer, according to advisers and officials.”

Washington Post: “The nationwide immigration raids that President Trump said would begin Sunday failed to materialize on the streets of major U.S. cities, even as his statement cast a cloud of fear that kept many families indoors.”

“Immigration enforcement authorities said their plans to track down migrants with deportation orders would continue, but their operations over the weekend appeared more akin to routine actions rather than the mass roundups the president promised.”

New York Times: “President Trump woke up on Sunday morning, gazed out at the nation he leads, saw the dry kindling of race relations and decided to throw a match on it. It was not the first time, nor is it likely to be the last. He has a pretty large carton of matches and a ready supply of kerosene.”

“When it comes to race, Mr. Trump plays with fire like no other president in a century. While others who occupied the White House at times skirted close to or even over the line, finding ways to appeal to the resentments of white Americans with subtle and not-so-subtle appeals, none of them in modern times fanned the flames as overtly, relentlessly and even eagerly as Mr. Trump.”

Washington Post: “Mulvaney spends considerably less time with Trump than his two previous chiefs of staff, Reince Priebus and John F. Kelly. And the president has sometimes kept him out of the loop when making contentious foreign policy decisions, advisers say. At a recent donor retreat in Chicago, Mulvaney told attendees that he does not seek to control the president’s tweeting, time or family.”

“Instead, Mulvaney has focused much of his energy on creating a new White House power center revolving around the long-dormant Domestic Policy Council and encompassing broad swaths of the administration. One White House official described Mulvaney as ‘building an empire for the right wing.’ He has helped install more than a dozen ideologically aligned advisers in the West Wing since his December hiring. Cabinet members are pressed weekly on what regulations they can strip from the books and have been told their performance will be judged on how many they remove. Policy and spending decisions are now made by the White House and dictated to Cabinet agencies, instead of vice versa.”

“The Trump administration is preparing a new rule for foreign nationals seeking asylum at the U.S. border with Mexico, in which immigrants seeking refugee status would have to do so in the first country they enter rather than at the U.S. border,” the Wall Street Journal reports.

“The announcement comes as President Trump seeks to stem the flow of Central Americans arriving at the U.S. border. It would upend immigration law and likely be immediately challenged in court.”

Brian Stelter: “President Trump launched a bigoted attack against four minority congresswomen on Sunday morning. His tweets were straight up racist. Did the news media accurately describe it that way?”

“By and large, no, most major news outlets did not do that. Reporters and anchors took the story seriously but largely leaned on ‘critics,’ primarily Democrats, and cited their accusations of racism. The significance of Trump’s words risked being lost in a partisan fog.”

“Now California Gov. Gavin Newsom has less than two weeks to decide the fate of the proposed law, which has provoked fierce criticism from Republicans across the country.”

Jonathan Bernstein: “The good news is that public opinion surveys since Trump became president show a solid shift against his bigotry; in fact, support for immigration has surged. One can support or oppose immigration regardless of animus toward any particular group. But Trump has, from the start of his campaign, made clear that his immigration policies are indeed based on bigotry. That’s probably one of the main reasons he’s been so unpopular throughout his presidency.”

“The bad news is that it’s highly likely that the closer the president comes to explicit racism, the more the minority of hardcore bigots who support him will feel emboldened. Even his less prejudiced supporters may find themselves drifting toward uglier beliefs. It’s bad for a president to hold those views, but much worse for him to express them publicly.”

“The even worse news is that Republicans in a position to do something about this – members of Congress, other elected officials, staffers within the administration – went silent on Sunday.”

Mike Allen: “Trump is all-in on us-versus-them politics and does not care if he occasionally crosses the line into racism. Trump allies expect this to get worse, not better.”

HuffPost: “No other U.S. president has lost so many Cabinet members in his first term to ethics issues. After Acosta, the total number of ethics-related Cabinet-level departures in the Trump administration has reached five.”

The others are Tom Price, Scott Pruitt, David Shulkin and Ryan Zinke.

“Ex-Fox & Friends co-host Clayton Morris has left the country amid more than two dozen lawsuits from investors who say he defrauded them in real estate deals involving properties in Indianapolis,” the Indianapolis Starreports.

“Morris, who previously resided in a $1.4 million home in New Jersey, has moved with his family to a coastal resort town Portugal, according to his wife’s Facebook post.”