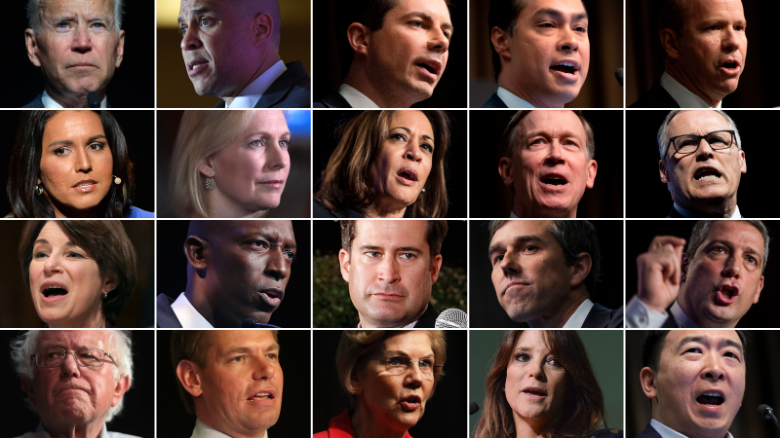 A new St. Anselm College poll in New Hampshire finds Joe Biden leading the Democratic presidential race with 21%, followed by Kamala Harris at 18%, Elizabeth Warren at 17%, Pete Buttigieg at 12% and Bernie Sanders at 10%.

Beto O’Rourke, who registered at 6% in the April poll, received zero percent support in the new poll. The poll’s margin of error is 5.2%, which means that the top three candidates — Biden, Harris and Warren – are virtually tied.

Meanwhile, a new CNN poll in New Hampshire finds Joe Biden leading the Democratic presidential field with 24%, followed by Elizabeth Warren and Bernie Sanders at 19% each.

The five-point margin between Biden and the two senators matches the survey’s margin of sampling error. They are followed by Pete Buttigieg at 10%, Kamala Harris at 9%, Cory Booker at 2% and Beto O’Rourke at 2%.

“If President Trump makes of fun of his age or questions his mental state during a debate, Joe Biden has a response at the ready: He’ll challenge him to do push-ups on stage,” the Washington Post reports.

Wall Street Journal: “The math is simple: Voters 50 and older are expected to make up more than half of Iowa caucus-goers in 2020, and more than three-quarters of the Democratic field is on hand to court them in the first state on the nomination calendar.”

“AARP, the largest advocacy group in the U.S. for people 50 and older, is flexing its muscles by bringing 19 of the Democratic candidates in front of its members for five different forums this week across the Hawkeye State. Several of the candidates are also pushing out policy proposals on health care, drug prices, Medicare and other issues of special importance to older voters, timed to coincide with the gatherings.”

Washington Post “Politically expedient: That’s how sources on the Trump campaign and on Capitol Hill see the move. The ensuing outrage that sparked Democrats to coalesce around the group of liberal congresswomen, who have been the center of party infighting, only helps feed Trump’s preferred narrative that the party is beholden to it’s far-left flank.”

Said one Trump adviser: “Trump’s tweets yet again reinforced in the minds of many Americans that the Democratic Party is the party of AOC and Omar.”

Playbook: “The president now has a foil, and it’s four young women of color who are from the energetic progressive wing of the Democratic Party. Some Republicans think the president is trying to highlight political views he believes are out of the mainstream — albeit ham-handedly.”

Politico: “Months of bleak polling couldn’t stop the parade of lower-level Democrats crowding into the presidential primary. But bankruptcy might.”

“Eleven Democratic presidential candidates — nearly half of the sprawling field — spent more campaign cash than they raised in the second quarter of the year, according to new financial disclosures filed Monday. Eight contenders active in the spring limped forward with less than $1 million in cash on hand, and several top-tier contenders were already spending multiples of what their lower-profile competitors raised.”

Washington Post: How the 2020 candidates are spending their money.

Mark Sanford (R), the former South Carolina congressman ousted from office after President Trump urged voters to reject him, told Charleston Post & Courier he is considering a run for president.

Sanford confirmed he will take the next month to formulate whether he will mount a potential run against Trump as a way of pushing a national debate about America’s mounting debt, deficit and government spending.

Politico: “There’s also evidence that moments in Trump’s presidency when he’s been accused of making racist statements have done the most harm to his image.”

“When Trump claimed there were ‘very fine people on both sides’ after white supremacists clashed with counterprotesters in Charlottesville, killing one woman and leaving others injured, his approval rating dipped to a low of 39 percent. And after word leaked out of the White House that Trump once referred to El Salvador, Haiti and African nations as ‘shithole’ countries, his rating fell to 36 percent.”

Venture capitalist Peter Thiel, a vocal supporter of President Trump, told Fox News that while most of the Democratic presidential field was “equally unimpressive,” he thought that Sen. Elizabeth Warren was “the dangerous one.”

Said Thiel: “I’m most scared by Elizabeth Warren. I think she’s the one who’s actually talking about the economy, which is the only thing — the thing that I think matters by far the most.”

National Journal: “Swing-seat freshman Democrats raised a collective $24 million in the second quarter of 2019, a staggering sum that will provide an early fortification for key House battlegrounds and complicate Republicans’ attempts to reclaim the majority.”

“It’s the latest sign that the cash influx that boosted dozens of Democratic candidates to victory last November isn’t dissipating, even with the next election still more than a year away and with some two-dozen presidential candidates competing for donations.”

“Beto O’Rourke will report raising about $3.6 million from April through June, a startlingly small sum for a candidate whose presidential campaign once appeared ascendant and who raised massive amounts of money for his 2018 Senate race,” Politico reports.

“President Trump, his re-election committees and the Republican National Committee raised over $123 million in the second quarter of 2019, bringing their total cash on hand to a combined $108 million as the race for the White House heats up,” CBS News reports.