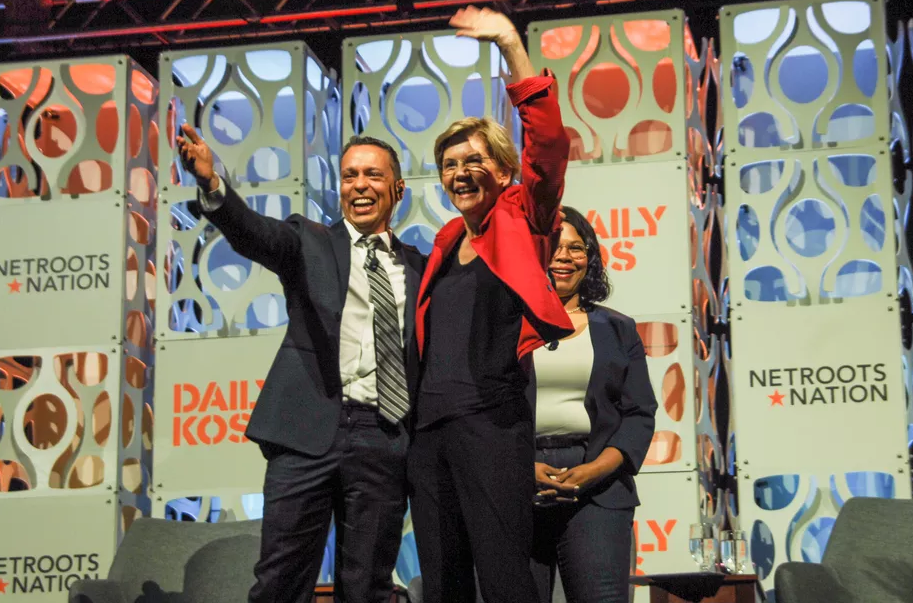 McClatchy: “Warren’s summer-long rise in polls and fundraising success in the Democratic presidential primary is usually attributed to her detailed policy agenda or longstanding appeal to liberal diehards.”

“But Warren supporters and other friendly Democrats cite another reason for her ascent: Voters who expected to see an awkward policy wonk on the campaign trail are instead impressed by a candidate they describe as authentic and charismatic.”

“That shift has marked a key development in a primary where many Democratic voters say they are most interested in a candidate who can defeat Trump next fall. And it speaks to Warren’s ability to reach beyond her natural base of progressive activists, connecting with voters who might be more ideologically moderate but nonetheless drawn to her.”

New York Times: “The settings on Mr. Biden’s trip were idyllic: a speech on the banks of a river in Dover, a news conference outside of a Portsmouth ice cream shop, a house party in a lush backyard here in Atkinson. But the words suggested that the former vice president is entering a new and more confrontational phase of his 2020 campaign.”

“Mr. Biden’s fresh efforts to highlight distinctions with his rivals — over issues that ranged this weekend from health care and foreign policy, to electability and executive orders — come as he seeks to move on from weeks of scrutiny of his decades-long record, and to offer a more substantive and forward-looking vision beyond his early focus on defeating the president.”

Playbook: “If You’ve watched the NRCC this cycle, you will notice that the GOP’s House campaign arm has focused a good deal on branding incumbent House Democrats as socialists. This is part of a strategy: They believe Democrats have veered far outside the bounds of the traditional Democratic Party, and voters are not going to stand for it.”

“The Guardian first reported O’Rourke’s family history, saying that ‘abundant’ documentation exists on the website Ancestry.com of the couple’s ‘slave-owning’ ancestors and ‘their support for the Confederacy.’”

Politico: “If Bernie Sanders’ team had its way, every reporter covering the Vermont senator would put out a tweet disclosing their unvarnished, personal feelings about the candidate.”

“It’s not going to happen, but campaign manager Faiz Shakir thinks he knows what it would reveal anyway.”

Said Shakir: “This isn’t intended to be a sweeping generalization of all journalists, but there are a healthy number who just find Bernie annoying, discount his seriousness, and wish his supporters and movement would just go away.”

“But this longstanding pattern has become more complicated in the Trump years. The president is strong among less educated white voters, who are also overrepresented among nonvoters. And Democrats already banked many of the rewards of higher turnout in the midterm elections, when the party out of power typically enjoys a turnout advantage and did so yet again, according to 2018 Times/Siena data.”

“The past few weeks have put on remarkable display just how far to the left the Democratic Party has moved, with many in the 2020 presidential field now embracing previously untouchable positions on health care and immigration,” the Washington Post reports.

“Democrats once touted their defense of those with preexisting conditions — a stance supported by the vast majority of Americans — but many leading presidential candidates now support ending the private insurance coverage on which most of the country relies. Democrats used to focus almost exclusively on reuniting migrant children and their families and protecting undocumented immigrants brought here by their parents; now many of the candidates are openly espousing making illegal border crossing a civil offense rather than a criminal one.”

“The high-profile shifts on issues that voters say they care about most mark a risky gambit by many candidates to tap into new energy in the party’s liberal base, the home of some of its loudest voices in the primary season. But it is triggering new worry that it comes at a cost: confirming Republican arguments that Democrats are far out of the mainstream, a threatening posture when moderate suburban voters have been the linchpin to winning general elections and down-ballot races.”