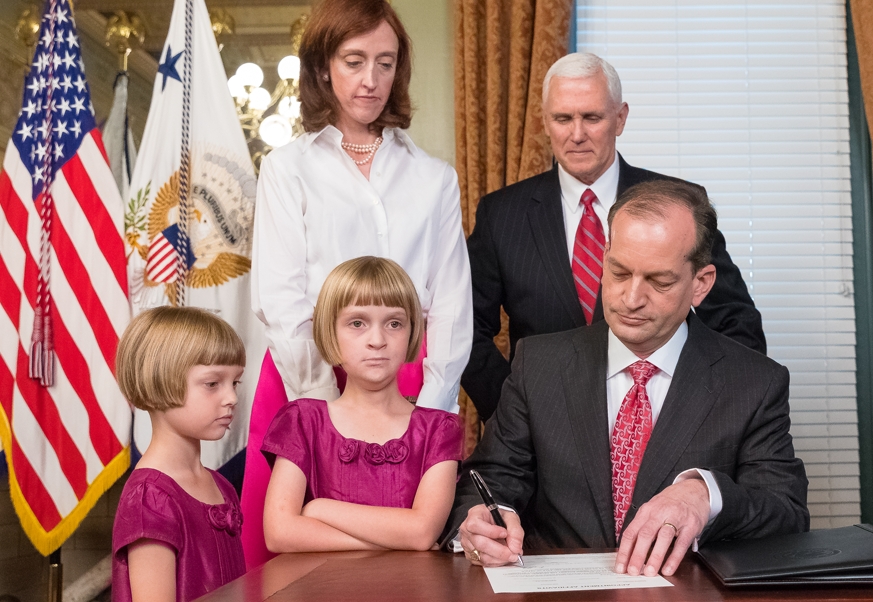 President Trump said Friday morning that Alexander Acosta, his embattled secretary of labor, will resign following controversy over a lenient plea deal he made with Jeffrey Epstein when he was a prosecutor in Florida, the New York Times reports.

A House Judiciary Committee hearing with former special counsel Robert Mueller, who investigated possible obstruction of justice by President Trump, has been delayed by a week until July 24, the Wall Street Journal reports.

“President Trump has told confidants he’s eager to remove Dan Coats as director of national intelligence, according to five sources who have discussed the matter directly with the president,” Axios repos.

“Trump hasn’t told our sources when he plans to make a move, but they say his discussions on the topic have been occurring for months — often unprompted — and the president has mentioned potential replacements since at least February. A source who spoke to Trump about Coats a week ago said the president gave them the impression that the move would happen ‘sooner rather than later.’

“The House voted Friday to curb President Trump’s ability to strike Iran militarily on Friday, adopting a bipartisan provision that would require the president to get Congress’s approval before authorizing military force against Tehran,” the New York Times reports.

Jonathan Swan: “Top figures in the conservative legal community are stunned and depressed by President Trump’s cave in his fight for a citizenship question on the 2020 Census. Sources say Leonard Leo and other Federalist Society stalwarts were shocked and floored by how weak the decision was.”

Asked one conservative leader: “What was the dance all about if this was going to be the end result?”

Tennessee Gov. Bill Lee (R) has proclaimed Saturday as Nathan Bedford Forrest Day in Tennessee, a day of observation to honor the former Confederate general and early Ku Klux Klan leader whose bust is on display in the state Capitol, the Tennessean reports.

Per state law, the Tennessee governor is tasked with issuing proclamations for six separate days of special observation, three of which, including the July 13 Forrest Day, pertain to the Confederacy.

New York Times: “It’s difficult to figure out who’s funding climate denial, because many of the think tanks that continue to question established climate science are nonprofit groups that aren’t required to disclose their donors. That’s true of the Competitive Enterprise Institute, a free-market research organization in Washington that disputes that climate change is a problem.”

“So, the program for a recent gala organized by the institute, which included a list of corporate donors, offered a rare glimpse into the money that makes the work of these think tanks possible.”

Among the sponsors: Google and Amazon.

“Republican lawmakers are pushing back on a new White House plan that calls for a vote on raising the debt ceiling before August and then revisiting spending talks in the fall,” The Hill reports.

“GOP senators say there’s little desire in their conference to vote on a standalone proposal to increase the nation’s debt limit, something that’s broadly unpopular with the base.”

Susan Glasser: “Yet the public spectacle of Presidential name-calling—Trump, while President, has called a former aide who turned on him a ‘dog’ and attacked as a ‘Horseface’ the alleged lover who said he had tried and failed to buy her silence—obscures a highly relevant political truth. Trump may love to hurl insults and quite visibly relishes nothing so much as a public Twitter spat. He is willing, though, to accept and make peace with even his harshest critics, as long as they cease and desist from their public dissent. Trump cares about the appearance of criticism more than the criticism itself. His unheralded genius is not in insulting his critics but in co-opting them—or at least in coming to mutually beneficial truces of the sort that suggests Trump’s social-media histrionics are more calculated than they seem.”

“After all, Trump has essentially stocked his entire government with formerly vehement critics, many of whom said far, far worse things about him than the British Ambassador did. When Trump was elected, the RNC aide who is now the President’s executive assistant wept. His chief of staff, Mick Mulvaney, promised to protect the Constitution from him. Some of his biggest cheerleaders on Capitol Hill today once considered themselves diehard Never Trumpers.”

“When he resigned as defense secretary last December, Jim Mattis thought it might take two months to install a successor. That seemed terribly long at the time,” the AP reports.

“Seven months later, the U.S. still has no confirmed defense chief even with the nation facing potential armed conflict with Iran. That’s the longest such stretch in Pentagon history.”

“There is also no confirmed deputy defense secretary, and other significant senior civilian and military Pentagon positions are in limbo, more than at any recent time.”

Washington Post: “Over the past month and a half, President Trump has set in motion plans to strike Iran, ordered nationwide immigration raids, threatened punitive and imminent tariffs on Mexico and said he would fight to get a citizenship question on the census that was rejected by the Supreme Court.”

“Each time, he launched extensive planning, created angst even among his own officials and some supporters, and devoted significant government resources to preparation.”

“And each time, he ultimately pulled the plug.”

Playbook: “What’s going on? It’s doubtful the president has changed much, and you can no longer say the Mueller investigation is weighing on him. Here’s a theory: Past aides were skilled at reading his intentions, understanding what to ignore and knowing how to redirect his whims. But recently, the administration has been unable to keep up with a president whose unstructured decision-making process has him in different positions in a few hours. For White House reporters, just trying to pin down basic facts of what the administration is doing from day to day has become a funhouse of mirrors — adding to the confusion.”

“An internal battle among House Democrats took on new life Thursday as lawmakers turned against each other over questions of race, with the latest flare-up ignited by controversial comments from Rep. Alexandria Ocasio-Cortez and her chief of staff,” Politico reports.

“Speaker Nancy Pelosi and her lieutenants tried to move on but Democrats from several different factions within the party dug in, refusing to set aside lingering tensions that first broke into the open two weeks ago during a massive blowup over a border funding package.”