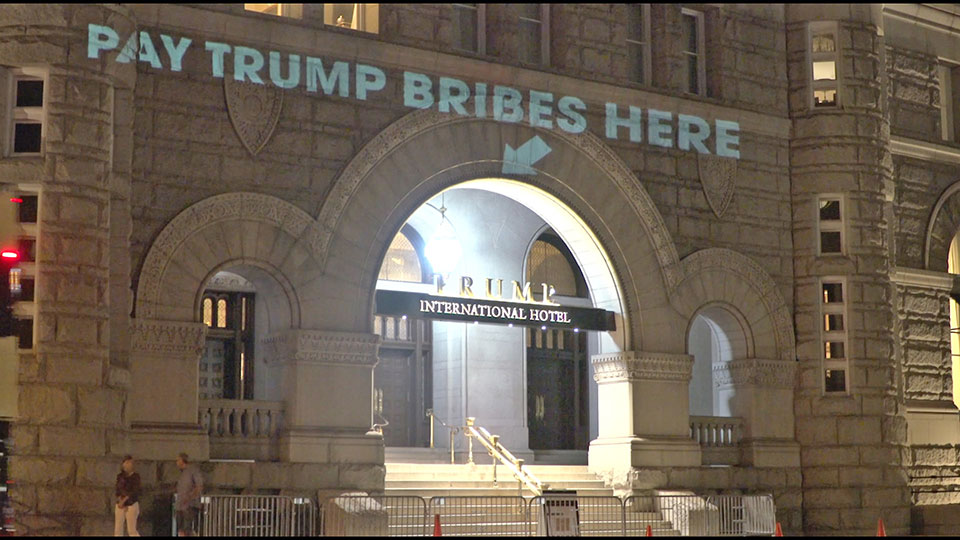 “A federal appeals court Wednesday sided with President Trump, dismissing a lawsuit claiming the president is illegally profiting from foreign and state government visitors at his luxury hotel in downtown Washington,” the Washington Post reports.

“The unanimous ruling from the U.S. Court of Appeals for the 4th Circuit is a victory for the president in a novel case brought by the attorneys general of Maryland and the District of Columbia involving anti-corruption provisions in the emoluments clauses of the U.S. Constitution.”

Labor Secretary Alexander Acosta “publicly defended his role in overseeing the prosecution of Jeffrey Epstein for sex crimes committed in Florida over a decade ago, bucking a growing chorus of Democratic calls for his resignation,” the New York Times reports.

“Mr. Acosta said he faced a tough choice between accepting a plea deal that was not as tough as he wished it would be and going to trial with witnesses who were scared to testify in what he described as ‘a roll of the dice’ that might not result in a conviction and prison term.”

Aaron Blake: The big question Acosta did not answer.

“But pressure is rising from other corners of the White House, with acting White House chief of staff Mick Mulvaney privately urging the president to dismiss him… Mulvaney also may be seizing on an opportunity to try to depose a frequent antagonist who has frustrated some conservatives in the White House and business leaders on the outside.”

Fox News host Tucker Carlson launched an attack on Rep. Ilhan Omar (D-MN), who came to the U.S. as a refugee from Somalia, saying the outspoken progressive is “living proof” that U.S. immigration laws are “dangerous,” The Hill reports.

Said Carlson: “No country can import large numbers of people who hate it and expect to survive. The Romans were the last to try that with predictable results. So be grateful for Ilhan Omar, annoying as she is. She’s a living fire alarm, a warning to the rest of us.”

“Ask members of the Washington diplomatic corps about the cables that Sir Kim Darroch, the British ambassador who resigned Wednesday, wrote to London describing the dysfunction and chaos of the Trump administration, and their response is uniform: We wrote the same stuff,” the New York Times reports.

As one ambassador, who is still serving and therefore spoke on the condition of anonymity, said: “It could have been any of us.”

“Speaker Nancy Pelosi chided progressives in a closed-door meeting Wednesday, calling on them to address their intra-party grievances privately rather than blasting their centrist colleagues on Twitter,” Politicoreports.

“Pelosi’s comments, which were described as stern, came during the first full caucus meeting since a major blow up over emergency border funding last month between progressive and moderate lawmakers as well as a recent spat with Rep. Alexandria Ocasio-Cortez (D-NY) and her freshman allies.”

New York Times: “It was supposed to be an exclusive party at Mar-a-Lago, Donald Trump’s members-only club in Palm Beach, Fla. But other than the two dozen or so women flown in to provide the entertainment, the only guests were Mr. Trump and Jeffrey Epstein.”

“The year was 1992 and the event was a ‘calendar girl’ competition, something that George Houraney, a Florida-based businessman who ran American Dream Enterprise, had organized at Mr. Trump’s request.”

Recalled Houraney: “I arranged to have some contestants fly in. At the very first party, I said, ‘Who’s coming tonight? I have 28 girls coming.’ It was him and Epstein.”

“A State Department intelligence analyst has resigned in protest after the White House blocked portions of his written testimony to a congressional panel to exclude data and evidence on climate change and its threat to national security,” the Wall Street Journal reports.

“President Trump’s overhauled July Fourth celebration cost the D.C. government $1.7 million, an amount that — combined with police expenses for demonstrations through the weekend — has bankrupted a special fund used to protect the nation’s capital from terrorist threats and provide security at events such as rallies and state funerals,” the Washington Post reports.

The White House plans to send its replacement for the North American Free Trade Agreement to Congress after Sept. 1, setting up a vote by the end of the year, sources told CNBC.

The reason for the delay: “The White House and Office of the U.S. Trade Representative are split over how aggressively to push House Democrats to approve the deal.”

Jed Shugerman: “Robert Mueller made a significant legal error and, based on the facts he found, he should have identified Trump campaign felonies. Mueller’s errors meant that, first, he failed to conclude that the Trump campaign criminally coordinated with Russia; second, he failed to indict campaign chairman Paul Manafort and his deputy Rick Gates for felony campaign coordination; third, the 10 acts of felony obstruction in Volume II fell flat among the general public because it lacked compelling context of these underlying crimes between the campaign and Russia. On top of these errors, the former special counsel said he deliberately wrote the report to be unclear because it would be unfair to make clear criminal accusations against a president.”

“The bottom line is that the Mueller Report is a failure not because of Congress or because of public apathy, but because it failed to get the law, the facts, or even the basics of writing right.”

BuzzFeed News “has obtained an explosive audio recording of the Metropol meeting in which a close aide of Europe’s most powerful far-right leader — Italian Deputy Prime Minister Matteo Salvini — and the other five men can be heard negotiating the terms of a deal to covertly channel tens of millions of dollars of Russian oil money to Salvini’s Lega party.”

“The recording reveals the elaborate lengths the two sides were willing to go to conceal the fact that the true beneficiary of the deal would be Salvini’s party — a breach of Italian electoral law, which bans political parties from accepting large foreign donations — despite the comfort with which he and Europe’s other far-right leaders publicly parade their pro-Kremlin political sympathies.”

“The Justice Department is seeking to discourage Robert Mueller’s deputies from testifying before Congress, potentially jeopardizing an agreement for two of the former prosecutors to answer lawmakers’ questions in private next week,” the New York Times reports.

“It is unclear what effect the Justice Department’s intervention will have on the men’s eventual appearances, but it raises the prospect that a deal lawmakers thought they had struck last month for testimony from Mr. Mueller, the former special counsel, and the two prosecutors could still unravel.”

“House Democrats are seeking to hear from two senior deputies to former special counsel Robert Mueller in closed-door testimony on Capitol Hill next week, the latest attempt to learn more about the Russia investigation in the face of Mr. Mueller’s vow to only discuss the facts laid out in his report,” the Wall Street Journal reports.

“Two former prosecutors on the special counsel’s team, James Quarles and Aaron Zebley, have been in negotiations to testify behind closed doors to the House Judiciary Committee on the same day that Mr. Mueller would appear in an open hearing before that panel and the House Intelligence Committee”

Michelle Goldberg: “The Epstein case is first and foremost about the casual victimization of vulnerable girls. But it is also a political scandal, if not a partisan one. It reveals a deep corruption among mostly male elites across parties, and the way the very rich can often purchase impunity for even the most loathsome of crimes. If it were fiction, it would be both too sordid and too on-the-nose to be believable, like a season of True Detective penned by a doctrinaire Marxist.”

“Buried within the Mueller report, there is a narrative that reads in parts like a thriller, like a comedy, like a tragedy — and, most important — like an indictment. The facts are compelling, all the more so because they come not from President Donald Trump’s critics or ‘fake news’ reports, but from Trump’s own handpicked colleagues and associates.”