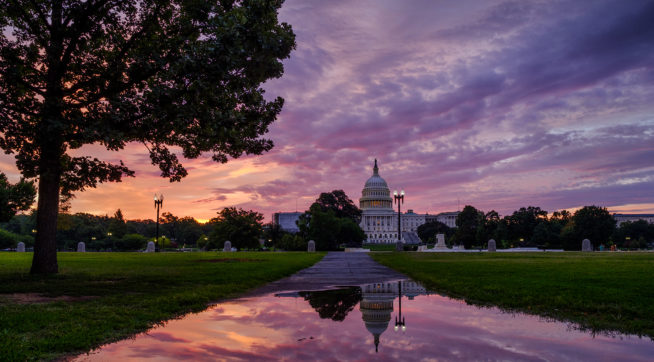 “Washington is deadlocked ahead of a series of fiscal deadlines, time is growing scarce and it’s only going to get harder to avoid a debacle,” Politico reports.

“Congressional leaders and the Trump administration have so far tried in vain to reach a deal that would avoid stiff budget cuts, a government shutdown and debt default in September. And now ugly splits in both parties are threatening to complicate the talks.”

Rep. Justin Amash (I-MI) told CNN that high-level party Republican party officials have thanked him behind closed doors for his stance on impeachment proceedings against Trump.

“Rep. Justin Amash (R-MI), a conservative critic of President Trump who recently left the Republican Party, would not rule out a 2020 presidential bid on Sunday, potentially complicating Trump’s path to reelection,” the Washington Post reports.

“The prospect of an Amash insurgency, which would face significant hurdles, has nonetheless unnerved some GOP strategists because it could pull libertarian and conservative support away from Trump, who won the 2016 election with razor-thin margins in six states, including Michigan.”

Said Amash: “I still wouldn’t rule anything like that out. I have to use my skills, my public influence, where it serves the country best.”

A crowd in a sports bar in France chanted “Fuck Trump” as Fox Newsreported the news of the U.S. Women’s national team winning their fourth FIFA Women’s World Cup on Sunday.

Speaker Nancy Pelosi (D-CA) “faced sharp criticism Sunday from some liberal lawmakers and activists over her latest comments about a group of House Democratic women who opposed last month’s emergency border aid bill that was supported by the leadership,” the Washington Postreports.

“While Pelosi maintains that she is aggressively confronting Trump on immigration and other fronts, there is widespread anger among liberals about the president and growing calls for Pelosi to resist working with the administration and begin impeachment proceedings.”

The Guardian: “The progressive-moderate split is becoming more evident and bitter.”

“Just when it looked like the threat of widespread primary challenges to House Democrats had quieted down, the activist left is agitating again to go after many of the party’s longtime incumbents,” Politico reports.

“Tensions inside the House Democratic Caucus are running high after an ugly debate last month over legislation to provide emergency aid for the humanitarian crisis at the border. Progressives lambasted leadership and some centrists who backed the measure as “child abusers” because it lacked money to improve hygiene and nutrition standards for detained children migrants.”

President Trump compared Alexandria Ocasio-Cortez to Eva Perón in a new book, American Carnage, saying that though he first saw the New York congresswoman “ranting and raving like a lunatic on a street corner” and thinks “she knows nothing”, she has “a certain talent,” The Guardianreports.

“Perón, known popularly as Evita, was an actor married to Argentinian president Juan Perón who rose to fame as a champion of working-class and female voters before dying of cancer in 1952, aged 33.”

The White House has not extended invitations to Facebook and Twitter to attend its social media summit on Thursday, CNN reports.

“The people, who spoke to CNN Business on the condition of anonymity, suggested it was not surprising. They said they believe the summit would amount to a right-wing grievance session and was not aimed at seriously discussing some of the issues facing large technology companies.”

Washington Examiner: “Legal experts said that over his first term, Trump is expected to name some 250 judges to the Supreme Court, district courts, courts of appeals, and the U.S. Court of International Trade. Overall, there are 870 federal judges.”

USA Today: “Pop quiz: The Affordable Care Act became law in 2010, was upheld by the Supreme Court in 2012 and 2015, and has survived dozens of repeal efforts in Congress. So is it finally safe?”

“The latest threat looms in New Orleans, where a three-judge panel of the U.S. Court of Appeals for the Fifth Circuit will hear 90 minutes of oral argument Tuesday in a challenge that threatens the law’s key features – and possibly the entire 974-page statute.”

“Agents with the Federal Bureau of Investigation and Immigration and Customs Enforcement have turned state driver’s license databases into a facial-recognition gold mine, scanning through hundreds of millions of Americans’ photos without their knowledge or consent, newly released documents show,” the Washington Post reports.

“Neither Congress nor state legislatures have authorized the development of such a system, and growing numbers of Democratic and Republican lawmakers are criticizing the technology as a dangerous, pervasive and error-prone surveillance tool.”

“The Trump administration on Sunday vowed to continue ‘maximum pressure’ on Iran after the nation announced that it would start enriching uranium beyond limits set under a 2015 deal, but the U.S. has few options when it comes to trying to curb Iran from producing a nuclear weapon,” Politico reports.

“After withdrawing from the international nuclear agreement in 2018, President Trump repeatedly said he wanted to negotiate a new deal with Iran, but he has continued to impose harsh sanctions and move troops to the region for possible military options.”

“Iran’s brazen move on Sunday threatens to put the U.S. and its allies back where they were before the deal — with no comprehensive restrictions on Iran’s nuclear ambitions.”

Said Cuccinelli: “They’re ready to just perform their mission, which is to go and find and detain and then deport the approximately one million people who have final removal orders.”