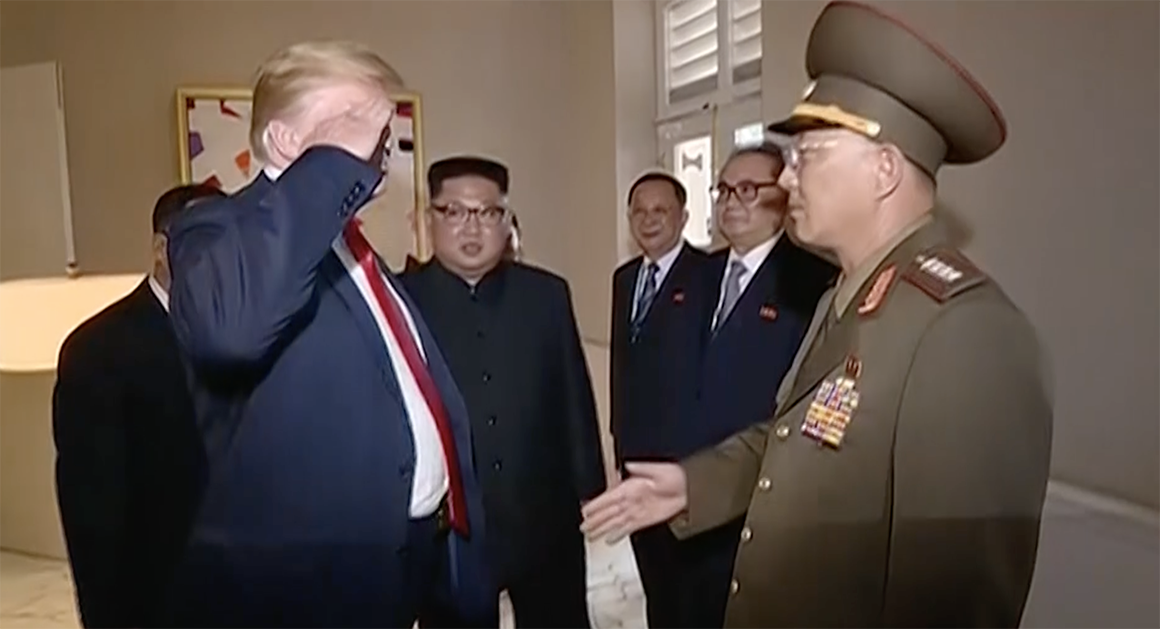 TRUMP SURRENDERS TO NORTH KOREA. New York Times: “From a seemingly fanciful tweet to a historic step into North Korean territory, President Trump’s largely improvised third meeting on Sunday with Kim Jong-un, the North Korean leader, was a masterpiece of drama, the kind of made-for-TV spectacle that Mr. Trump treasures.”

“But for weeks before the meeting … a real idea ha[d] been taking shape inside the Trump administration that officials hope might create a foundation for a new round of negotiations.”

“The concept would amount to a nuclear freeze, one that essentially enshrines the status quo, and tacitly accepts the North as a nuclear power, something administration officials have often said they would never stand for.”

Associated Press: “Afterward, it was unclear whether the meeting was more show than substance. Other than the headline-grabbing moment and the unprecedented images, Trump’s only accomplishment appeared to be securing an agreement to restart nuclear talks that he himself had walked out on in February during his last summit with Kim in Vietnam.”

Carlson said there “is no defending the North Korean regime, which is a monstrous regime. It is the last really Stalinist regime in the whole world. It is a disgusting place, obviously.”

He added: “On the other hand, you’ve got to be honest about what it means to lead a country. It means killing people. Not on the scale the North Koreans do, but a lot of countries commit atrocities, including a number that we are closely allied with.”

Greg Sargent: “If Mueller’s investigation exonerated Trump, you would think the best strategy for Trump’s allies would be to simply sit back while Mueller describes his findings in as detailed and unvarnished way as possible. Oddly enough, that’s not what they’re planning on doing.”

“The monumental absurdity at the core of this disconnect is the reason this strategy is likely to backfire on Trump. Yet, at the same time, the very existence of this strategy, despite its obvious ridiculousness, opens a window on how the Trump propaganda network wields disinformation, and how in certain respects, it does serve his ends.”

“A new study found that for every 25,000 retweets that a known Russian troll account received during the 2016 election, Donald Trump’s poll numbers jumped 1%,” Axios reports.

“Retweets did not have a similar effect on Hillary Clinton’s poll numbers.”

“Caveat: Correlation does not always mean causation. If a Trump talking point encouraged a particularly viral Tweet, for example, it may have also encouraged a change in Trump’s polling on its own.”

“During a speech to US troops at the Osan Air Base in South Korea on Sunday, President Trump said that he had given them their first pay increase in almost a decade,” CNN reports.

Said Trump: “And, you know, one thing I didn’t mention: You also got very nice pay raises for the last couple of years. Congratulations. Oh, you care about that. They care about that. I didn’t think you noticed. Yeah, you were entitled. You know, it was close to 10 years before you had an increase. Ten years.”

“Last week prosecutors filed a series of motions, including one that spelled out some of Duncan Hunter’s questionable expenditures that prosecutors said were linked to his extramarital affairs with five women, including three lobbyists and two congressional staffers.”

“President Trump said that the Pentagon would put military tanks on display on Thursday in Washington as part of his plans to turn the Fourth of July celebration in the nation’s capital into a salute to the country’s military prowess,” the New York Times reports.

“The tanks would join an airborne display of the nation’s firepower, including a flight of Air Force One over Washington and a performance by the Navy’s Blue Angel jets. Mr. Trump, who will be speaking at the celebration, has requested that the chiefs for the Army, Navy, Air Force and Marines be standing next to him as aircraft from each of their services fly overhead and their respective hymns play on loudspeakers.”

“President Trump has hijacked what for decades had been a nonpolitical Independence Day celebration on the National Mall, packing his ticketed-event speech with political appointees and Republican donors,” the HuffPost reports.

“The Republican National Committee has been offering major donors tickets to Trump’s speech, as have political appointees at the White House and executive branch agencies.”

“This month marks the longest period of time the U.S. economy has gone without a recession, just edging past the economic cycle that ended when the dot com bubble burst,” Axios reports.

“This milestone comes at one of the more pessimistic moments in the last decade as economists are warning that a significant slowdown in growth, and maybe a recession,is coming thanks to the impact of trade tensions and slumping growth in other economies across the globe.”

Boston Globe: “Besides being billionaires and spending much of their fortunes to promote pet causes, the leftist financier George Soros and the right-wing Koch brothers have little in common… Now they have found something to agree on: the United States must end its ‘forever war’ and adopt an entirely new foreign policy. In one of the most remarkable partnerships in modern American political history, Soros and Charles Koch, the more active of the two brothers, are joining to finance a new foreign-policy think tank in Washington.”

“It will promote an approach to the world based on diplomacy and restraint rather than threats, sanctions, and bombing. This is a radical notion in Washington, where every major think tank promotes some variant of neocon militarism or liberal interventionism.”

“The street cred they bring from both ends of the political spectrum — along with the money they are providing — will make this new think tank an off-pitch voice for statesmanship amid a Washington chorus that promotes brinksmanship.”

New Yorker: “Hunter speaks in the warm, circuitous style of his father. Through weeks of conversations, he became increasingly open about his setbacks, aware that many of the stories that he told me would otherwise emerge, likely in a distorted form, in Breitbart or on ‘Hannity.’

“He wanted to protect his father from a trickle of disclosures, and to share a personal narrative that he sees no reason to hide. ‘Look, everybody faces pain,’ he said. ‘Everybody has trauma. There’s addiction in every family. I was in that darkness. I was in that tunnel—it’s a never-ending tunnel. You don’t get rid of it. You figure out how to deal with it.’”

James Hohmann: “Asked at a news conference in Japan on Saturday whether he agrees with Vladimir Putin’s claim that ‘Western-style liberalism’ is in decline, President Trump responded by criticizing the cities of Los Angeles and San Francisco, which he said are ‘sad to look at’ because they are ‘run by liberal people.’”

“Obviously, this was not what the Russian strongman was talking about during his interview with the Financial Times.”

“This is part of a pattern: Standing on the world stage as the face of the United States, Trump has routinely fumbled basic facts about history, foreign policy and economics.”

Max Boot: “Trump doesn’t know the difference between West Coast liberalism and Western liberalism — between supporting the Green New Deal and supporting the immortal words of the Declaration of Independence that all people are endowed ‘with certain unalienable Rights,’ including ‘Life, Liberty, and the pursuit of Happiness.’”

“As it enters its 11th year, America’s economic expansion is now the longest on record — a streak that has shrunk unemployment, swelled household wealth, revived the housing market and helped fuel an explosive rise in the stock market,” the AP reports.

“Yet even after a full decade of uninterrupted economic growth, the richest Americans now hold a greater share of the nation’s wealth than they did before the Great Recession began in 2007. And income growth has been sluggish by historical standards, leaving many Americans feeling stuck in place.”

Alexander Heffner: “This doesn’t come naturally to the media. Instead, they renormalize a habitually deceitful president in return for the perception of access. We saw this again Sunday, as some gloated about a groundbreaking presidential North Korea landing without appropriate context. A historic betrayal of American values and acquiescence to authoritarianism would be more accurate.”

“On last Sunday’s Meet the Press interview of President Trump, the first of his presidency, Chuck Todd replicated the approach of ABC’s 30 Hours special, enabling Trump to volley back and forth disinformation… and personal grievances—without any merit or real public policy discussion.”

“In a climate in which he has bashed senselessly their hosts, ABC and NBC chose to invite Trump back to the mainstream and legitimize his hateful rhetoric. They seem intent on giving a platform to the only president to call journalists the enemy of the people (which alone makes Trump the most un-American, anti-constitutionalist president in U.S. history).”