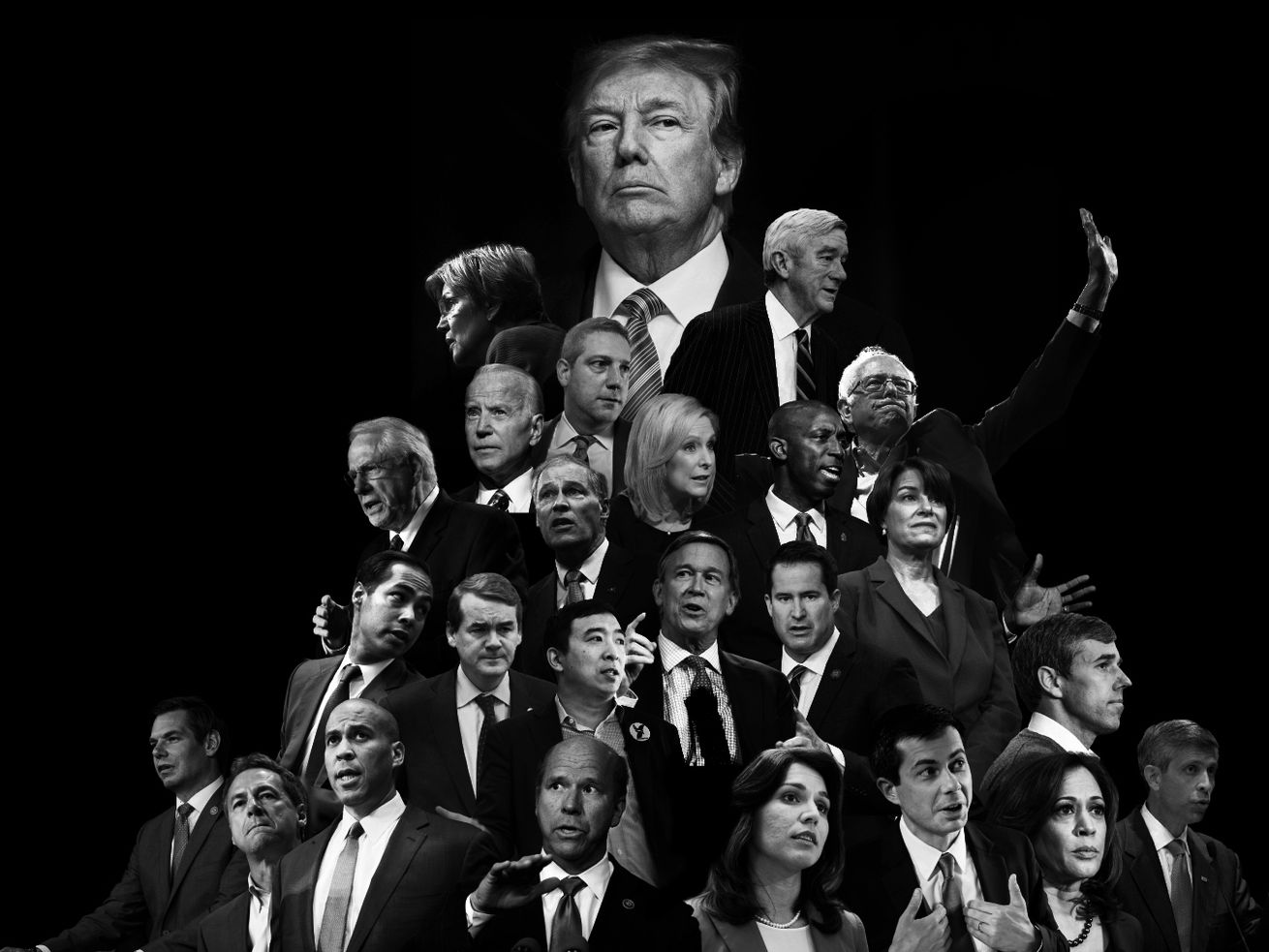 “The seemingly off-the-cuff remark is likely to stoke agitation back in Washington, where Democrats and Republicans have blasted Trump for not taking seriously the special counsel’s report into Russia’s ‘sweeping and systematic’ campaign to disrupt the 2016 election in Trump’s favor.”

“President Trump joked with Vladimir Putin about getting rid of journalists when the two leaders met at the G-20 summit in Japan,” the  Guardian reports. Said Trump: “Get rid of them. Fake news is a great term, isn’t it? You don’t have this problem in Russia but we do.”

Replied Putin: “We also have. It’s the same.”

“Twenty-six journalists have been murdered in Russia since Putin first became president, according to the Committee to Protect Journalists (CPJ), many of them investigative reporters scrutinizing governmental abuses.”

“President Trump and Saudi Crown Prince Mohammad bin Salman posed next to each other for a photo of world leaders on Friday at the Group of 20 Summit in Japan, exchanging pleasantries in the process,” The Hillreports.

“Trump and the crown prince could be seen making conversation and smiling as they stood next to each other for the ‘family photo’ at the gathering of world leaders. Trump stood between the Saudi royal and Turkish President Recep Tayyip Erdogan.”

Former President Jimmy Carter said that an investigation “would show that Trump didn’t actually win the election in 2016. He was put into office because the Russians interfered,” USA Today reports.

When asked if that means he believes Trump is an illegitimate president, Carter said, “Based on what I said, which I can’t retract.”

Ezra Klein: “Sen. Kamala Harris is the closest Democrats have to a potential consensus candidate. She doesn’t suffer from the enmity that Hillary Clinton voters have for Sen. Bernie Sanders, or that leftists hold for former Vice President Joe Biden, or that the Obama administration has for Elizabeth Warren.”

“She’s not another white guy running to represent a diverse party. She’s got enough political experience to be a credible candidate, but not so much that she’s been on the wrong side of dozens of controversial issues.”

Jonathan Chait: “Debates don’t always matter or have clear effects, but the second night of the first round had one very likely effect: Kamala Harris is going to be propelled into the first tier of candidates.”

Dan Balz: “Harris has often struggled to match the promise of her candidacy, but in her first opportunity arrayed as one of 10 candidates, she made the most of the opportunities she was given — and took some on her own to announce her arrival on the big stage.”

“Thursday’s debate may not change the polls much but it will probably reorder how Democrats begin to think about the choices before them.”

John Harris: “The case against Joe Biden’s presidential campaign got made Thursday night right out in the open — sound up, lights glaring — nothing blurred in a haze of euphemism, politesse, or indirection.”

For a counter narrative, here is Josh Marshall on Biden: “The chat show and Twitter chatter says that Biden had a terrible evening. That’s not what I saw. I think he did fairly well for what he was trying to achieve, for the race he’s running. He hit the broad outlines of policy objectives most Democrats support, without overly committing in this direction or that. He focused on the importance of beating Trump. Biden doesn’t need fireworks. He’s already ahead. He needs to not make mistakes, not seem old, seem on his toes. I think he basically did that. The confrontation with Harris is a case in point. It was a powerful moment for her. But I thought it was a decent moment for him too if you judge it by the part of the electorate he’s appealing to and the strategy of the race he’s running. Someone said he wasn’t the guy from his veep debates. But that was a different brief.

Perhaps I’m wrong. Perhaps the media chatter will become a self-fulfilling prophecy. But I think the commentary is getting ahead of itself.

The problem for Biden seems a bit different to me. Biden’s message is basically, I’m safe. I’m experienced. I can beat Trump. Given what the country is going through that is a much stronger message than a lot of hyper-political folks realize. He’s a safe bet for a country that’s getting ripped apart. But the other contenders are getting better, growing into their messages, maybe showing that they can also get the job done. If they can get it done too Biden’s sales pitch starts to fade. I’m skeptical that this debate will hurt Biden, just as all the other supposed disasters haven’t impacted him at all. But the relative rise of the other top five or so contenders points to how he can fade over time.”

“Oregon Senate Republicans plan to return to the state Capitol and resume voting on bills Saturday morning,” the Oregonian reports.

Caucus leader Herman Baertschiger (R) said lawmakers “have an obligation to pass budget bills, and he believes lawmakers can complete that work by the midnight Sunday deadline for lawmakers to adjourn. Democrats have a slate of other policy bills they also want to pass, and Baertschiger would not say whether Republicans would waive procedural rules to allow votes on that legislation in the waning hours of the legislative session.”

“Republicans have shut down the Oregon Senate for more than a week, by walking out and denying Democrats the 20-member quorum they need to conduct business.”

Walter Shapiro: “There is nothing that political pundits and armchair pollsters at home love as much as a flash of emotional drama in the midst of a presidential debate. And that is why everyone in the world watching American TV—whether they are in Ulan Bator, Ukraine, or Utah—will see an endless reel of Harris confronting Biden.”

“The danger, though, lies in over-hyping the lasting significance of this (cliché alert) viral moment more than seven months before the Iowa caucuses. While a strong performance throughout the evening will undoubtedly boost Harris’s fundraising and maybe her poll ratings, Biden still left the stage in his accustomed place as the candidate of Obama era continuity.”

Politico: ““In Miami, three of Biden’s top aides — Anita Dunn, Kate Bedingfield and Symone Sanders — spent 30 minutes batting away questions from skeptical reporters after the debate. They insisted that Biden performed well and made his case to the American people, and acknowledged no mistakes.”

Rep. Joe Kennedy III (D-MA) told WPRI that he now supports opening an impeachment inquiry against President Trump, “becoming one of the most high-profile House Democrats yet to break with Speaker Nancy Pelosi on the charged question.”

A new Morning Consult/FiveThirtyEight survey asked Democratic debate viewers how they felt about each candidate before and after each debate.

When plotted, the resulting chart is mostly consistent with the conventional wisdom. Those candidates above the line gained support, while those below the line lost support.

Here is the Morning Consult poll post debate, where you can see Harris skyrocketing into 2nd place:

More polling from the debates:

The Atlantic: “For these former officials, the apparently incalculable magnitude of this number did not cause them to reconsider Trump’s every denial of the varied allegations—to wonder, for example, about the likelihood that 22 or 23 or 28 women were all lying in their stories of harassment, groping, unwanted kissing, and, in Carroll’s case, sexual assault.”

Thursday night’s Democratic debate was the highest-rated Democratic match-up in Nielsen ratings history, CNN reports. “Final viewership numbers won’t be available until Friday afternoon. But the so-called ‘overnight’ ratings, recording how many households tuned in, showed a 15 to 20 percent increase over Wednesday, which was night one of the two-night event… Given the strong household rating for Thursday night, the total viewership could be in the ballpark of 17 million.”

“More than 15 million viewers tuned in for part one of the 2020 presidential election’s first primary debate on television Wednesday night,” CNN  reports. “The Nielsen ratings reflect enormous interest in the presidential race — with millions of people tuning into NBC, MSNBC and Telemundo to size up the candidates who want to beat President Trump next year.”

“Sen. Kamala Harris (D-CA) said that she does not support abolishing private health insurance in the United States, saying she misheard a question from NBC’s moderators about Medicare-for-all during the presidential debate,” the Washington Post reports.

“Thursday night, Harris alone joined Sen. Bernie Sanders (I-Vt.) in raising her hand when all of the candidates were asked if they would outlaw private health insurance in favor of a government single-payer plan.”

“But appearing on Morning Joe on Friday, Harris suggested she had incorrectly heard the question as being about whether she personally would be willing to use a government plan instead of a private one.”

One of the most powerful moments of last night’s Democratic debate was when Pete Buttigieg was asked about the recent police shooting in South Bend. Rachel Maddow asked why he hadn’t increased the number of black police officers on the force.

Said Buittigieg: “Because I couldn’t get it done. My community is in anguish right now because of an officer-involved shooting, a black man, Eric Logan, killed by a white officer. And I’m not allowed to take sides until the investigation comes back. The officer said he was attacked with a knife, but he didn’t have his body camera on. It’s a mess. And we’re hurting.”

Playbook: “That’s a politician taking responsibility for a shortcoming. We don’t see that much.”

Los Angeles Times: “Buttigieg spoke with evident emotion of the pain of black residents and said he was determined to bring about a day when police would inspire support instead of fear among African Americans not just at home, but everywhere. The response won’t defuse tensions. But he may get credit for not dissembling or trying to palm the blame off on others.”

Joe Biden’s campaign dismissed reports that staffers are “freaking out” about his performance during the second round of Democratic presidential debates on Thursday night, The Hill reports.

A source told reporter Olivia Nuzzi “that internally, field staff says the campaign-organized debate watch parties in early voting states have been ‘awkward’ and that Biden isn’t playing well to those who attended.”

She added: “He isn’t listening to his debate prep and he’s ‘set in his ways,’ the source close to the campaign tells me.”

The Alabama law — which prohibits a method of abortion that is typically the only method available for pregnancies after 15 weeks — was passed in 2016. But since then a wave of even more aggressive bans were passed by states who saw Justice Anthony Kennedy’s departure from the court in 2018 as an opportunity to roll back the right to the procedure.

So far, the Supreme Court has declined to jump into the most contentious abortion cases since Kennedy’s exit, but in a concurrence Friday Justice Clarence Thomas signaled his desire to overturn previous decisions protecting abortion rights.