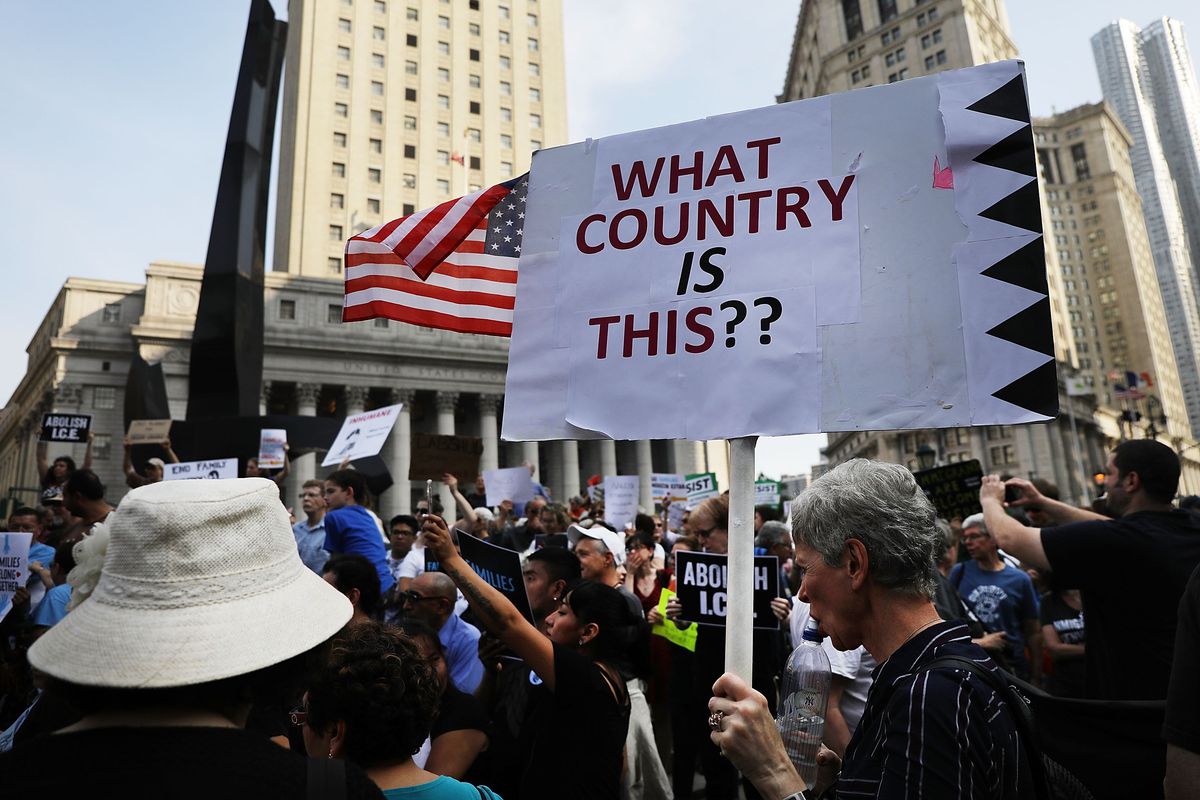 “The House passed a $4.5 billion bill funding food, water and shelter for people entering the U.S. at the southern border after Democrats pushed through last-minute changes to win support from progressive and Hispanic lawmakers,” the Wall Street Journal reports.

“Passage in the House sets up a showdown with the GOP-controlled Senate, which is expected to take up its own version of the legislation this week. Immigration officials have warned that they could soon run out of money to process the large number of asylum seekers at the border, and lawmakers are set to leave Washington at the end of the week for a July 4 recess.”

“Russian President Vladimir Putin and President Trump plan to meet for at least an hour on the sidelines of this week’s Group of 20 summit in Japan, a Kremlin official said Wednesday, confirming plans for the first meeting between the leaders in almost a year,” the Washington Post reports.

“I will have a very good conversation with him. What I say to him is none of your business.” — President Trump, quoted by Politico, on what he and Russian President Vladimir Putin say to each other behind closed doors. And you fuckwit President, it is every bit of our business. You are our employee, much to our chagrin, and you will tell us what you talk about with our nation’s number 1 enemy.

Conservative commentator Tomi Lahren told Fox & Friends that the humanitarian crisis at the border was all a part of a Democratic plan to have currently-detained migrants released into the “shadows of society” to overwhelm U.S. cities and ultimately become Democratic voters.

Said Lahren: “This is all strategy. And they cloak it in a humanitarian crisis. It’s an opportunity.”

She’s got us. Yes, we Democrats are nefarious. We elected Trump because we knew he would cause a crisis at the border, bringing in more Latinos. Brilliant Tomi, brilliant.

Politico: “Under the joint House Judiciary and Intelligence Committee plan unveiled Tuesday night, an unspecified number of the special counsel’s senior deputies are expected to accompany their former boss and testify in closed session when Mueller appears next month. Intelligence Committee Chairman Adam Schiff declined Tuesday night to identify the deputies, and it was also unclear if they would be appearing under subpoena.”

Playbook: “House Democrats have griped behind the scenes that their agenda is getting short shrift. The DCCC has presented Democrats with stark polling to back that up. Democratic leadership has suggested privately that impeachment could cost the party their majority and the White House.”

“But now, with Robert Mueller’s planned appearance in front of two House committees next month, House Democrats have set up a nearly monthlong period of intense political suspense and speculation that only heightens and highlights impeachment, and risks completely drowning out anything else the party will do.”

“Mueller and impeachment are now assured to be the dominant and likely singular conversation from now until the August recess. Is July 17 the beginning of impeachment? Or just another event the leadership will be able to blow by?”

The House Oversight Committee voted to authorize a subpoena for White House counselor Kellyanne Conway “after she failed to show for a hearing on a government watchdog’s findings that she broke the law dozens of times,” the Washington Post reports.

The National Rifle Association has shut down production at NRATV, the New York Times reports. “The N.R.A. on Tuesday also severed all business with its estranged advertising firm, Ackerman McQueen, which operates NRATV, the N.R.A.’s live broadcasting media arm.”

President Trump told Fox Business the federal government should sue tech giants like Google and Facebook and lambasted the platforms, including Twitter, for allegedly trying to rig the 2020 elections in favor of Democrats.

Said Trump: “They make it much harder for me to get out the message. These people are all Democrats, it’s totally biased toward Democrats. If I announced tomorrow that I’m going to become a nice liberal Democrat, I would pick up five times more followers.”

Do it. I dare you, you fuckwit President.

Activists have been granted permission to fly the “Baby Trump” blimp that has followed President Trump around the world before his planned July 4th address, Fox 5 reports.

The Supreme Court will issue its last rulings of the term tomorrow at 10 a.m. ET. That means we could see rulings in two gerrymandering cases and the U.S. Census citizenship question case.

“The Trump administration official in charge of diplomatic protocol plans to resign and isn’t going to Japan for this week’s Group of 20 meetings, where he would have played a sensitive behind-the-scenes role,” Bloomberg reports.

“Sean Lawler, a State Department official whose title is chief of protocol, is departing amid a possible inspector general’s probe into accusations of intimidating staff and carrying a whip in the office.”

Rick Hasen: “The government’s conduct in the pending Supreme Court case about adding a citizenship question to the census has gone from indefensible to outrageous. In the case, which is likely to be decided this week, Solicitor General Noel Francisco on Tuesday asked the Supreme Court to become complicit in a cover up of discriminatory activity by doing something the court does not and cannot do: decide a legal issue that is not before it.”

“If the court does so, any pretense of the legitimacy of the decision will be gone.”

“The nation’s federal debt is now projected to balloon to ‘unprecedented levels’ over the next 30 years, if policymakers fail to change laws, potentially pushing the country into the risk of a ‘fiscal crisis,’ the nonpartisan Congressional Budget Office said in a new report Tuesday,” CNN reports.

“A former senior Commerce Department official refused to answer more than 100 questions during an interview with the House Oversight and Reform Committee that centered on the Trump administration’s controversial decision to add a citizenship question to the 2020 census,” Politico reports.

“Commerce Department lawyers instructed James Uthmeier, who served as senior adviser and counsel to Secretary Wilbur Ross, not to answer the committee’s questions about his contacts with the White House and his conversations with Ross.”