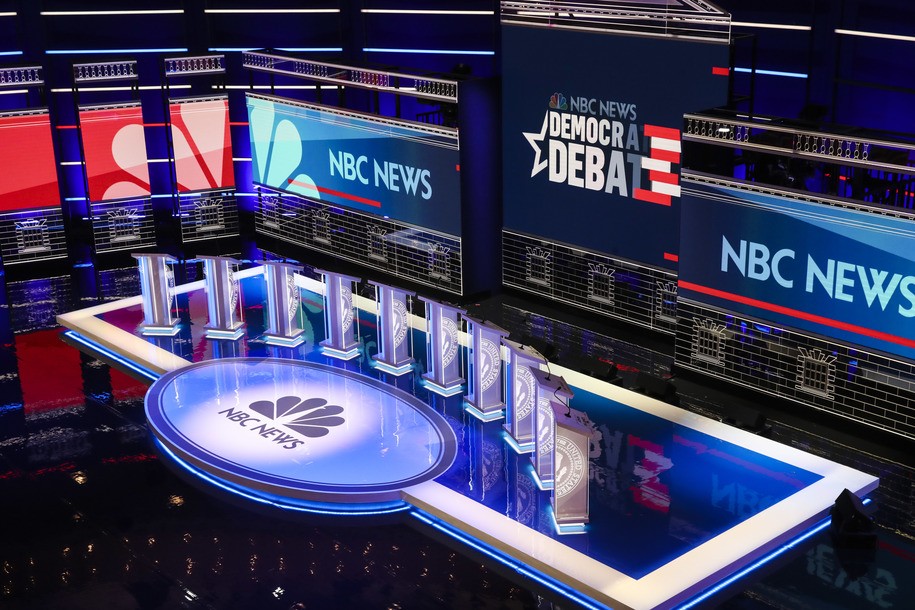 When asked if he would commit to supporting the Democratic nominee if it’s clear it won’t be him, Sen. Bernie Sanders would not make any such commitment to NBC News. Instead, he talked about his 2016 race: “Some people say that maybe if the system was not rigged against me, I would have won the nomination.”

Jonathan Chait: “While Sanders is coyly hiding behind the ‘some people say’ formulation, he is threatening to repeat the tactics he used in 2016, when he called the process ‘rigged’ and withheld his support long after the outcome was decided.”

The system was not rigged against him. He lost fair and square. The more he acts like this, a petulant Trump-like child, the more he will be relegated to his 10-12% floor of support.

Washington Post: “Only a handful of the stats were stretched past the breaking point. Instead, most ranged from mostly or partly true.”

Nicholas Kristof: “As the Democratic presidential campaign began, I was deeply skeptical of Elizabeth Warren. My first objection was that she appeared to have parlayed possible Native American heritage to gain academic jobs … That offended me, and I knew it would repel huge numbers of voters. Second, I thought she shot from the hip and, with her slight political experience, would wilt on the campaign trail. Third, I thought she was a one-note Sally, eloquent on finance but thin on the rest of domestic and foreign policy.”

“So much for my judgment: I now believe I was wrong on each count, and her rise in the polls suggests that others are also seeing more in her.”

Independents are more split, with 47% saying fact-checkers tend to favor one side and 51% saying they deal fairly with all sides.

When you and your political party are liars, of course you think fact checkers are biased in favor of the truth. All Republicans everywhere, living or dead or yet to be born, are liars.

Steve Israel: “First, the ‘unknowns’ must become known. For candidates polling in the neighborhood of 1 percent, such as Kirsten Gillibrand, Andrew Yang, Eric Swalwell, Tim Ryan, or Bill De Blasio, the debate stage will be a launchpad. They need to make the case to donors, activists, and primary voters that they are viable investments. If they leave the debate the way they came in, as mostly unknown, then they will have lost the debate and likely the race.”

“Second, the ‘knowns’ must remain unscathed. For candidates at the head of the pack, they run with targets on their backs. Joe Biden has the largest target and could find himself playing defense… But Elizabeth Warren has enjoyed a recent surge as a progressive, and there should be no surprise if you see some attempts to blunt her momentum.”

“Third, the ‘known unknowns’ must sink or swim. Candidates like Cory Booker and Beto O’Rourke who have polled somewhere between the top and bottom tiers of the pack will use their moment in the spotlight to offer the public some more compelling rationales for why they should be the Democratic Party nominee. These middle tier candidates will either gas up or sputter out under the pressure of standing out on the debate stage.”

Matthew Yglesias: “Elizabeth Warren not only served as the literally and metaphorically central figure of the opening Democratic debate, but also took a few clear steps toward demonstrating that she’s ready to compete with President Trump on the general election stage.”

“Warren showed early in the debate what everyone knows — that she has a keen mind and a passion for restraining corporate power and plutocracy. But what Democrats wonder about Warren is whether she’s a winner, especially when she has to play outside her comfort zone of business regulation.”

“Wednesday night, she did that — addressing a core worry of Bernie Sanders supporters, elegantly sidestepping an intraparty spat over immigration, and, perhaps most interestingly of all, refusing to go far left on guns even when doing so would have been an easy applause line. Warren skillfully hewed to a moderate course while still sounding like a solid progressive. It’s not easy to pull that off. And it’s what it takes to win a presidential election.”

The Hill: “Warren was sharp, energetic and often stood above the fray as many of her rivals bickered and declined to challenge her policies, even when they had previously disagreed with her.”

John Harris: “There are people who argue that the Democratic Party’s steady leftward progression during the Trump years is largely an optical illusion—a distorted impression one gets from assigning too much significance to social media noise or flamboyant figures like Alexandria Ocasio-Cortez. Ten Democrats making their case to be president on a debate stage in Miami Wednesday night suggest a much different conclusion.”

“This is a party eager to go on the ideological offensive not just against Donald Trump (whose name did not dominate the evening even as he was invoked plenty) but against an economic and political power structure that candidates argued is deeply corrupt. Liberals must be empowered to bring bad actors to heel through robust intervention of government.”

Playbook: “This is not a good sign for Joe Biden, who has made running as a moderate Democrat who can work with Republicans a central plank of his candidacy.”

Politico: “Julián Castro has spent months in the shadow of fellow Texan Beto O’Rourke. But in the span of less than three minutes Wednesday, Castro seized on the inhumane treatment of migrants at detention centers to summon his party’s spiraling outrage over immigration, generating an elusive breakout moment at the expense of the once-high-flying O’Rourke.”

“In narrow political terms, Castro broke through punching up at a better-known rival, aggressively backing O’Rourke so far into a corner on his signature issue that he struggled in real-time to explain his position. But Castro’s righteous lashing also defined the tone of the first presidential debate of the 2020 contest, in which he and other low-polling men in need of momentum aimed their frustrations at O’Rourke, rather than the highest-polling candidate on stage, Sen. Elizabeth Warren.”