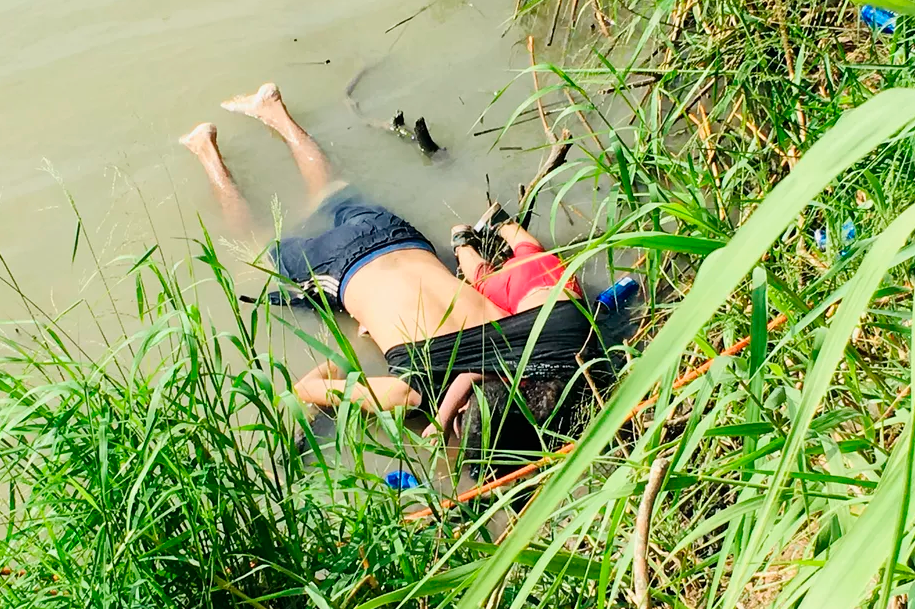 These are the bodies of Óscar Alberto Martínez Ramírez and his daughter, Valeria, who is almost 2. They died trying to cross the Rio Grande near Brownsville, Texas.

Former special counsel Robert Mueller will testify to Congress in open session on July 17 about his investigation of Russia’s interference in the 2016 election and possible obstruction of justice by President Trump, the Washington Post reports.

“The session comes as nearly 80 House Democrats have called for launching impeachment proceedings against Trump, arguing that he has ignored the Constitution that he took an oath to defend while repeatedly refusing to cooperate with congressional investigations.”

“Mueller’s testimony is certain to provide the headline-grabbing, made-for-cable television testimony that Democrats have been craving since the release of the 448-page, redacted report on April 18.”

“John Sanders, the country’s top border security official, will resign from his job as acting commissioner of U.S. Customs and Border Protection next month,” the Washington Post reports.

“His resignation continues a dizzying pattern of personnel changes at DHS that have come in the middle of a border crisis triggered by the biggest migration surge in more than a decade.”

Wall Street Journal: “He didn’t explain the reasons for his departure in the email and instead focused primarily on employees, telling them to ‘take care of each other.’”

Wrote Sanders: “I will leave it to you to determine whether I was successful.”

“Senate Majority Leader Mitch McConnell made clear Tuesday that Democrats are going to have to filibuster the fiscal 2020 defense authorization bill if they do not want final votes this week,” Roll Callreports.

“The Kentucky Republican opened the Senate with criticism of Monday afternoon’s statement by Minority Leader Charles Schumer that defense policy bill votes, including consideration of a key amendment regarding limitations on the use of funds for war with Iran, should be delayed until after this week’s Democratic presidential debates.”

“Rejecting a request from President Trump, a federal judge in Washington on Tuesday cleared the way for nearly 200 Democrats in Congress to continue their lawsuit against him alleging that his private business violates an anti-corruption provision of the Constitution,” the Washington Post reports.

“U.S. District Judge Emmet G. Sullivan declined to put the case on hold and said lawmakers could begin this week seeking financial information, interviews and other records from the Trump Organization.”

“Grisham will be assuming the roles formerly held by Bill Shine, who departed as White House communications director in March, and Sarah Sanders, who has said her last day will be this Friday.”

“Additionally, Grisham will remain in charge of communications for the East Wing in addition to her new West Wing responsibilities, staying on as the spokeswoman for the First Lady.”

“Hunter’s wife has pleaded guilty and agreed earlier this month to cooperate with prosecutors.”

President Trump warned Iran that any attack on “anything American” would be met with “great and overwhelming force” following Iranian remarks slamming new U.S. sanctions as permanently closing the path to diplomacy amid a spike in tensions in the Persian Gulf, the Washington Post reports.

“When the defense ministers of NATO countries meet in Brussels this week, there will be a notable absence: a Senate-confirmed, permanent United States Secretary of Defense,” CNN reports.

“The acting secretary and expected permanent nominee, Mark Esper, will be there, just as he was present at the White House last week as President Donald Trump and his national security team deliberated launching a military strike against Iran. But it’s not the same.”

“An acting defense secretary lacks the political capital and internal confidence of a permanent one. The Senate confirmation vests a secretary with explicit and implicit powers — from the ability to recruit and set long-term policies in the Pentagon to the power to communicate authoritatively with foreign counterparts and members of Congress.”

President Trump declined to say in an interview with The Hill that he has confidence in Christopher Wray and stressed that he disagrees with the FBI director, who has said he does not believe there was spying on the president’s 2016 campaign.

“Congress is trying to rush $4.5 billion in emergency humanitarian aid to the southwestern border while placing new restrictions on President Trump’s immigration crackdown, spurred on by disturbing images of suffering migrant families and of children living in squalor in overcrowded detention facilities,” the New York Times reports.

“But with a House vote on the package planned for Tuesday, some Democrats are revolting over the measure, fearing that the aid will be used to carry out Mr. Trump’s aggressive tactics… Republicans are siding with the White House, which on Monday threatened a veto. They oppose restrictions in the measure that are meant to dictate better standards for facilities that hold migrant children and to bar the money from being used for enforcing immigration law.”

Boris Johnson claimed in a BBC interview that a “no deal” Brexit could get through the U.K. Parliament if he is chosen as the next prime minister.

Johnson claimed that “politics have changed so much” since the original Brexit deadline, and both major parties face “mortal retribution from the electorate” if the U.K. doesn’t leave by the October 31 deadline.

“President Trump has recently mused to confidants about withdrawing from a longstanding defense treaty with Japan that he thinks treats the U.S. unfairly,” Bloomberg reports.

“Trump regards the accord as too one-sided because it promises U.S aid if Japan is ever attacked but doesn’t oblige Japan’s military to come to America’s defense, the people said. The treaty, signed more than 60 years ago, forms the foundation of the alliance between the countries that emerged from World War Two.”

New York Times: “Mexico’s mobilization of its security forces has been halting, and for most of the past two weeks it seemed to fall short of the dramatic show of force that the government had promised.”

“Still, the deployment has already disrupted the usual flow of people and commerce passing over this historically porous border, and sown fear among migrants and their smugglers alike.”

Playbook: “Over the last few days, Republican and Democratic aides have come to the conclusion that a budget deal is almost definitely out of reach. Time has run too short. Meetings aren’t getting scheduled anymore. It’s all but over, for the moment.”

“September will turn into a rush to pass a short-term funding bill to avert a shutdown come Sept. 30. The options will probably include a stopgap that funds government at current levels to some point in 2020, or a short-term, three-month deal to allow for Congress to try to strike a larger budget accord that would hike spending beyond 2019 levels. More than $100 billion in cuts take hold in January 2020, and pretty much everyone in Washington wants to avoid that.”

“So it’s totally possible– and even seems likely — that Washington will be thrown into a holiday season crisis as the White House, which considers itself savvy dealmakers, and Congress try to get a large-scale budget deal to head off $100 billion in budget cuts. Because why shouldn’t Congress create a crisis over the holiday season”

“President Trump’s honeymoon period with Mick Mulvaney is coming to an end. In recent weeks, Trump has been snapping at his acting chief of staff with some frequency, and expressing greater frustration with him than usual,” Politico reports.

“Trump has long said that he prefers the flexibility offered by temporary titles, but Mulvaney’s ongoing ‘acting’ status underscores the uphill battle he faces as Trump’s third chief of staff in less than two-and-a-half years. While Mulvaney is not in danger of losing his job any time soon, officials stressed, Trump’s treatment of him still signals to aides the slow deterioration of their relationship has begun.”