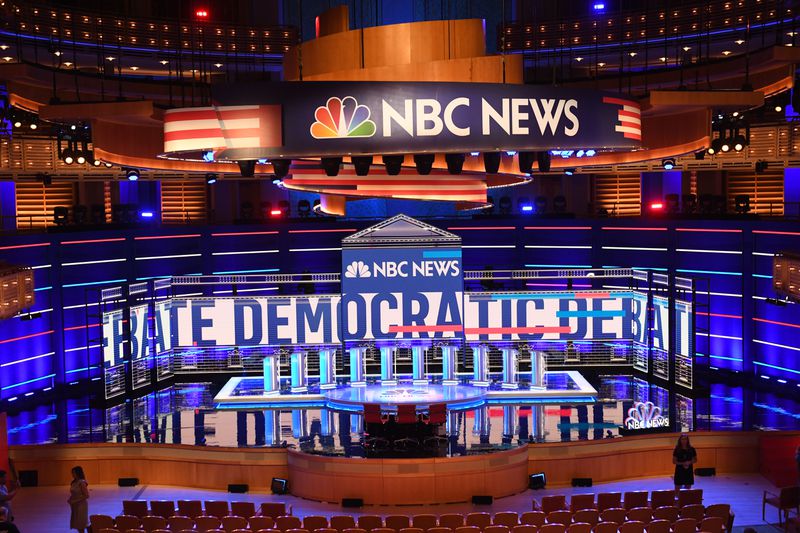 Another 29% are divided between the other 23 Democratic presidential hopefuls: Elizabeth Warren and Bernie Sanders receive 7% each, Kamala Harris receives 5%, and Pete Buttigieg is at 2%. All other candidates receive less than 2% support in the survey.

Former Vermont Gov. Howard Dean (R) told the Washington Post that Democrats “won’t win the White House if they nominate two older white men to be president and vice president in 2020, echoing calls by other prominent liberals for the party to embrace diversity on its presidential ticket.”

Said Dean: “If we have two old white guys at the top of this ticket, we will lose.”

Sen. Lindsey Graham (R-SC) “does not yet have a viable primary challenger — and the South Carolina Republican intends to keep it that way,” McClatchy reports.

“On Wednesday, the incumbent U.S. senator’s campaign announced that every Republican in the state’s congressional delegation is endorsing Graham for re-election in 2020… This announcement follows Graham’s rollout last week of endorsements from every Republican statewide elected constitutional officer.”

“The endorsements signal that Graham’s support his strong inside his party, giving him a comfort with his base he has not typically enjoyed in previous election cycles.”

Sen. Martha McSally (R-AZ) “has grown fearful of a 2020 primary challenge in recent days, kicking off a flurry of efforts to protect her at the highest levels of the Republican Party,” Politico reports.

“In a series of conversations with senior Republicans including President Trump, the senator has raised alarms about Daniel McCarthy, a skincare company executive who helped bankroll Trump’s 2016 campaign. McSally, who was appointed to her seat in early 2019 after losing a 2018 Senate race, faces a treacherous special election next year in a state that’s growing increasingly friendly to Democrats, and Republicans worry that a primary fight will further complicate her prospects.”

A new Cygnal poll in Alabama shows Roy Moore taking just 13% of the vote in the Republican Senate primary, trailing Tommy Tuberville, who leads with 29%, and Rep. Bradley Byrne (R), who has 21%.

Alabama Secretary of State John Merrill (R), who launched his campaign Tuesday, begins with 12% of the vote and another 22% are still undecided.

Richard North Patterson: “In our current historical moment, our polarized electoral college yields a president picked by people in a handful of swing states. At the congressional level, the Senate map is composed largely of non-competitive blue and red states, which accord equal legislative weight to states with wild disparities in population. And of 435 House districts, gerrymandering and demographic sorting have created, at the utmost, 75 competitive races.”

“To win and then to govern, Democrats must execute a broken field run through a treacherous electoral terrain complicated by the need, in any given locale, to inspire disparate constituencies with differing—and often conflicting—aspirations and resentments than the voting blocs they need to carry other crucial states or districts. Anyone who reduces sweeping this national checkerboard to a singular formula—propitiate swing voters; or turn out the base—is smoking political crack.”

Mayor Pete Buttigieg told MSNBC that he will not skip the first Democratic presidential debate tomorrow despite the ongoing crisis around a police shooting in South Bend, Indiana because “we have to be able to do many things at once.”

He added: “These things express themselves in so many different ways. And what I found on that stage at that town hall was, it was my job to absorb all of that pain, absorb all of that anguish, knowing that I could talk about all of the things we’ve done, but clearly we haven’t done enough. And accepting responsibility for that because I’m in charge.”

First Read: “The biggest disadvantage of going on the first night of the Democratic debates is that the coverage has a potential shelf life of 24 hours — before the second debate begins. So even if you stand out, does that get overshadowed starting at 9:00 pm ET on Thursday, when Biden, Bernie, Harris and Buttigieg take the stage?”

Sahil Chinoy: “The Republican Party leans much farther right than most traditional conservative parties in Western Europe and Canada, according to an analysis of their election manifestos. It is more extreme than Britain’s Independence Party and France’s National Rally (formerly the National Front), which some consider far-right populist parties.”

“The Democrats fall closer to mainstream left and center-left parties in other countries, like the Social Democratic Party in Germany and Britain’s Labour Party, according to their manifestos’ scores.”

“And the United States’ political center of gravity is to the right of other countries’, partly because of the lack of a serious left-wing party.”

Former Arizona Republican Party executive director Nathan Sproul explains in USA Today why his state could go either way in the 2020 presidential election.

“Even though Arizona is a border state, there is compelling evidence to suggest that ‘build the wall’ rhetoric works better in the Midwest than in Arizona. Our significant Hispanic population has always had a reason to vote Republican when the candidates were Bush and McCain. They both touted guest worker programs and trade with Mexico.”

Also important: “The members of the Church of Jesus Christ of Latter-day Saints are one of the most significant voting blocs in Arizona. However, it is far too simple to cluster all these people into the GOP vote. Throughout eastern Arizona, most Latter-day Saints are Democrats. They are the quintessential swing voter.”

Lynn Vavreck: “As you prepare to watch the first primary debate Wednesday-Thursday (and the 11 to follow), let go of the notion that any single moment is going to shift the state of the race overnight. That is not to say that debates aren’t important, but real consequences tend to emerge only in the days and weeks after the debate as the news media, candidates and voters react.”

“It’s easy to believe the stakes are high. Tens of millions of people watch. Opponents take aim at one another. Anything can happen. Some famous debate moments include Gerald Ford’s comment that ‘there is no Soviet domination of Eastern Europe’; Michael Dukakis’s emotionless response on whether he would support the death penalty if his wife were raped and murdered; Ronald Reagan’s quip that ‘I am not going to exploit, for political purposes, my opponent’s youth and inexperience.’”

“Data suggests, however, that none of these memorable moments changed election outcomes.”