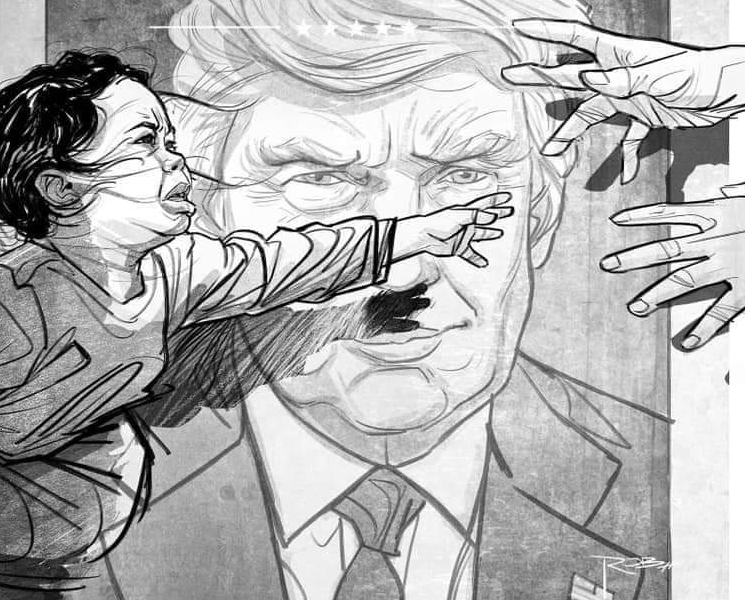 First Read notes that in less than three weeks, President Trump has made three different retreats:

“President Trump announced on Monday that he is imposing new sanctions on Iran, after saying for days that he preferred tightening the pressure on a crippled Iranian economy to launching an immediate military strike in retaliation for what American officials have said are recent aggressive acts by Tehran,” the New York Times reports.

Said Trump :“We will continue to increase pressure on Tehran. Never can Iran have a nuclear weapon.”

Meanwhile, the Washington Post notes that Iran said its forces “could shoot down more surveillance drones if they violate the country’s airspace.”

A federal judge says new evidence paints a “disturbing picture” that racial discrimination may be the motive behind the Trump administration’s push to ask everyone in the country about citizenship status, the AP reports.

Said U.S. District Judge George Hazel: “It is becoming difficult to avoid seeing that which is increasingly clear. As more puzzle pieces are placed on the mat, a disturbing picture of the decisionmakers’ motives takes shape.”

“The U.S. Supreme Court could soon render Hazel’s decision moot. The country’s highest court is expected to decide this week whether the Trump administration can add a citizenship question to the 2020 census.”

The White House moved to bar counselor Kellyanne Conway from testifying to Congress about alleged violations of Hatch Act, the Washington Post reports. Conway claimed that House Democrats are seeking to compel testimony from her in retaliation for her successfully managing President Trump’s 2016 campaign.

“The House Oversight Committee will vote on Wednesday to authorize a subpoena for White House counselor Kellyanne Conway for testimony connected to her violations of the Hatch Act if she does not voluntarily show up to the committee’s hearing,” Axios reports.

President Trump told The Hill that writer E. Jean Carroll was “totally lying” when she recently accused him of raping her in the mid-1990s.

“The New York Post’s former top editor, a supporter of President Trump and an old lieutenant of Rupert Murdoch who returned to the conservative tabloid as an adviser in early 2019, ordered the removal of a story about writer Jean Carroll’s sexual assault allegations against President Trump,” CNN reports.

“The Post’s story about Carroll’s sexual assault allegations was mysteriously scrubbed from the tabloid’s website on Friday afternoon.”

“The opposition candidate for mayor of Istanbul celebrated a landmark win Sunday in a closely watched repeat election that ended weeks of political tension and broke the long hold President Recep Tayyip Erdogan’s party had on leading Turkey’s largest city,” the AP reports.

“The governing party’s candidate, former Turkish Prime Minister Binali Yildirim, conceded moments after returns showed him trailing well behind Imamoglu, 54% to 45%. Imamoglu increased his lead from a March mayoral election by hundreds of thousands of votes.”

Politico: “The Democratic research group American Bridge is preparing a $50 million campaign to win over a slice of President Donald Trump’s base, and new polling has convinced the organization that Trump is vulnerable on pocketbook issues, especially health care, among white working-class voters.”

As he underwent confirmation for the Pentagon’s second-highest position in 2017, acting Defense Secretary Patrick Shanahan told lawmakers he was “aware of no incidents reflecting adversely” on his ability to do his job and had “never been party to any civil litigation,” USA Today reports.

“But at the time, he had only recently emerged from a contentious, years-long divorce, which is a civil court matter. His ex-wife had accused him in divorce filings and police records of punching her during a violent domestic battle in 2010.”

“The Trump administration has refused to publicize dozens of government-funded studies that carry warnings about the effects of climate change, defying a longstanding practice of touting such findings by the Agriculture Department’s acclaimed in-house scientists,” Politicoreports.

“The studies range from a groundbreaking discovery that rice loses vitamins in a carbon-rich environment — a potentially serious health concern for the 600 million people world-wide whose diet consists mostly of rice — to a finding that climate change could exacerbate allergy seasons to a warning to farmers about the reduction in quality of grasses important for raising cattle.”

“As a presidential candidate, Sen. Bernie Sanders (I-VT) has often defended his vote for a controversial 1994 crime bill as a hold-your-nose compromise that included measures popular within the Democratic Party, such as a ban on assault weapons. As a result, Sanders’ support for the massive anti-crime package hasn’t come under the same level of scrutiny that has at times stuck to other Democratic candidates,” NBC Newsreports.

“But an NBC News review of his past statements shows that Sanders also backed some of the legislation’s key get-tough-on-crime provisions, which he now says ‘created a very broken system,’ — a part of his public record that may surprise some Sanders supporters.”

“The Treasury Department’s internal watchdog has agreed to look into why designs of a new $20 bill featuring Harriet Tubman will not be unveiled next year,” the New York Times reports.

“Sen. Chuck Schumer (D-NY), the Democratic leader, last week asked the Treasury Department’s inspector general to open an investigation following Treasury Secretary Steven Mnuchin’s announcement at a May Congressional hearing that designs of the new $20 would be unveiled in 2026 instead of 2020 — the 100th anniversary of women gaining the right to vote.”