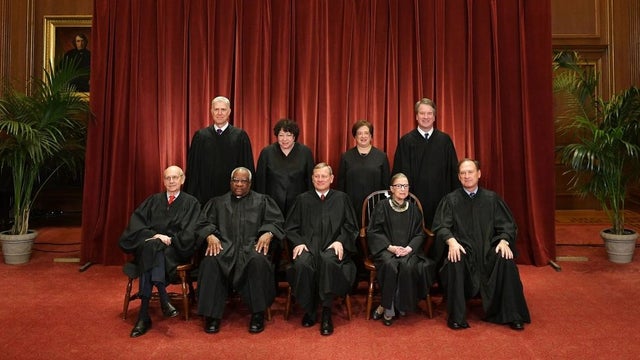 “The Supreme Court has ruled against the Virginia House of Delegates in a racial gerrymandering case that represents a victory for Democrats in the state,” The Hill reports.

“In the 5-4 ruling, the justices found that the House didn’t have the standing to appeal a lower court ruling that found that the new district maps must be used ahead of the 2020 election. Those new maps are already in use.”

“The Supreme Court on Monday said a person can be charged and tried in state and federal court for the same conduct without running afoul to the double jeopardy clause of the US Constitution because state and federal governments are separate sovereigns,” CNN reports.

“The case has implications for former Trump campaign chairman Paul Manafort, who is facing charges in New York State that are similar to the federal charges for which he has been tried.”

FiveThirtyEight: “In a matter of days, the Supreme Court may dramatically change the census. The court is slated to rule on whether the Trump administration can add a question about citizenship to the 2020 form. When the case was argued back in April, many court-watchers predicted that the court’s five conservative justices were ready to side with the administration.”

“There are few things we care more about around here than political apportionment (although, if we’re being honest, we care an awful lot about groceries, too). So we went in search of researchers who had estimated the potential effect of the citizenship question. We found several, none of whom agreed on just how big an impact this would have.”

“California loses at least one seat in all five scenarios, while Montana stands to gain one. Ohio, Minnesota and Alabama are all potential winners, depending on the scenario, while Texas, Arizona and Florida come out on the losing side in at least one estimate.”

“Protesters poured into the streets of Hong Kong on Sunday with renewed determination and a lengthening list of demands, rejecting the government’s retreat on a contentious extradition bill and extending the political crisis gripping the semiautonomous territory,” the New York Times reports.

“Hong Kong’s embattled leader, Carrie Lam, shelved the bill on Saturday and followed that up with a rare apology the next day, actions that pro-democracy activists dismissed as too little, too late. And the sheer size of the demonstration — organizers gave an unverified estimate of close to two million of the territory’s seven million people — made clear the public remained unsatisfied.”

South China Morning Post: “Pro-establishment politicians and analysts said the record turnout … was no longer just about the bill. It was about Lam and her governing style, fuelled also by the festering anger over other social problems faced by Hong Kong people.”

Washington Post: “As pressure has mounted in recent weeks on House Democrats to move more aggressively against Trump, Pelosi has demonstrated the firm grip she wields over her caucus — quashing, at least for now, the push for impeachment.”

“It is a command that colleagues say is drawn from a deep well of respect for the political wisdom of the most powerful woman in American politics — and fear that challenging her comes with the risk of grave cost to one’s career.”

“The vast majority of freshman House Democrats are still unwilling to say they support impeaching President Trump, with most preferring to wait until Congress has conducted more oversight investigations,” according to an Axios survey of all 64 of the new Democrats.

“Top congressional leaders from both parties will meet with senior White House officials this week as the Trump administration and Congress try once again to reach a deal to avoid tens of billions of dollars in automatic spending cuts the fall,” Politico reports.

“Yet both sides acknowledge they’re not close to an agreement at this point, with even Senate Republicans and the White House unable to fully hash out a common position among themselves. The federal government’s debt ceiling will also need to be increased later this year in order to avoid a catastrophic default, foreshadowing how ugly this fall may get in Washington.

“It’s only June, but President Trump’s laserlike focus on immigration and desire for a border wall are making GOP lawmakers nervous that lagging talks on a budget deal could further bog down and lead to another government shutdown!” The Hill reports.

“Trump is demanding $5 billion in border wall funding as part of a deal that would put limits on federal spending and raise the debt ceiling.”

“Chief Justice John Roberts began the Supreme Court’s term last fall seeking to assure the American public that his court does not ‘serve one party or one interest,’” the Washington Post reports.

“He will end it playing a pivotal role in two of the most politically consequential decisions the court has made in years. One initiative is to include a citizenship question in the 2020 Census, which has fueled a partisan showdown on Capitol Hill. The other could outlaw the partisan gerrymandering techniques that were essential to Republican dominance at the state and congressional level over the past decade.”

“President Trump is facing a hurdle no other president has — an unprecedented onslaught of investigations into almost every recent organization he has led,” Politico reports.

“In total, Trump faces at least 15 criminal or civil inquiries by nine federal, state and city agencies into his business, his charity, his campaign, his inaugural committee and his personal finances.”

Rick Wilson: “We live in a world of counterfactuals, hypotheticals, and more tu quoque scenarios than a reasonable person can process. That said, I have to beg my Republican friends to imagine — just for a moment — what you’d be doing if Hillary Clinton or Barack Obama said they would accept the help of a foreign power in a campaign and not report it to the FBI.”

“I’ll tell you what you’d do: You’d lose your fucking shit.”

“President Trump was so bothered by his chief of staff’s coughing during an interview in the Oval Office with ABC News that he asked his top aide to leave the room,” The Hill reports. Said Trump: “If you’re going to cough, please leave the room. You just can’t, you just can’t cough. Boy oh boy.”

And Jesus Christ, look at Trump tan goggles. Why can’t he get skin cancer like the rest of us?

Also, the President is not going to like this: “President Trump’s much-teased interview with ABC was not the ratings bonanza the numbers-obsessed president likely would have wanted,” Politico reports. “The hourlong special with ABC chief anchor George Stephanopoulos came in third in its timeslot Sunday night, notching 3.91 million viewers according to ratings aggregator TV by the Numbers.” “The interview’s ratings were a sharp drop from Celebrity Family Feud, which premiered in the time slot last week, and pulled in 6.1 million viewers.”

“Democrats investigating Donald Trump for obstruction of justice are eyeing a new strategy to break the president’s all-out oversight blockade: calling witnesses who never worked in the White House,” Politico reports. “Key lawmakers tell Politico they hope to make an end run around Trump’s executive privilege assertions by expanding their circle of testimony targets to people outside government who nonetheless had starring roles in Robert Mueller’s final report.”

President Trump told ABC News that he’ll be rolling out a new health care plan in a couple of months, saying it will be a key focus in his 2020 reelection campaign.

Sid Trump: “We’re going to produce phenomenal health care, and we already have the concept of the plan. We’ll be announcing that in two months, maybe less.”

New York Times: “While the president has acknowledged that no plan would be voted on in Congress until 2021, when he hopes to be in a second term with Republicans back in charge of the House, he is gambling that putting out a plan to be debated on the campaign trail will negate some of the advantage Democrats have on the issue.”

“But nervous Republicans worry that putting out a concrete plan with no chance of passage would only give the Democrats a target to pick apart over the next year.”

Associated Press: “Iran will break the uranium stockpile limit set by Tehran’s nuclear deal with world powers in the next 10 days, the spokesman for the country’s atomic agency said Monday while also warning that Iran could enrich uranium up to 20% — just a step away from weapons-grade levels.”

“The deal steadily has unraveled since the Trump administration pulled America out of the accord last year and re-imposed tough economic sanctions on Iran, deeply cutting into its sale of crude oil abroad and sending its economy into freefall. Europe so far has been unable to offer Iran a way around the U.S. sanctions.”

“President Trump’s latest anointment of an acting head of a major federal agency has prompted muttering, but no more than that, from Republican senators whose job description includes confirming top administration aides,” the AP reports.

“Their reluctance to confront Trump comes as veterans of the confirmation process and analysts say he’s placed acting officials in key posts in significantly higher numbers than his recent predecessors. The practice lets him quickly, if temporarily, install allies in important positions while circumventing the Senate confirmation process, which can be risky with Republicans running the chamber by a slim 53-47 margin.”