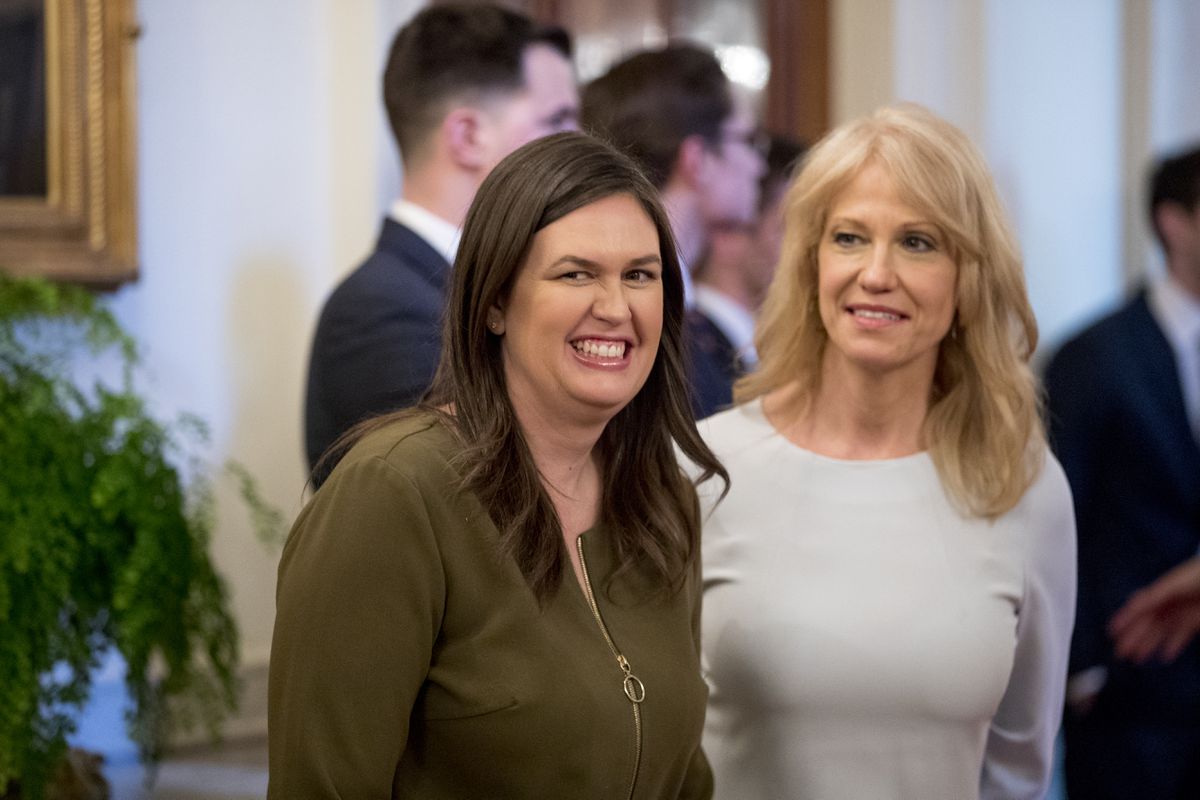 President Trump announced on Twitter that White House Press Secretary Sarah Huckabee Sanders — “the combative White House press secretary who unflappably defended President Donald Trump, followed his charge to discredit journalists who cover him, and admitted to lying to reporters” repeatedly when interrogated by Robert Mueller — will leave the White House at the end of June. Her next destination: Hell.

Playbook: “President Trump’s admission that he would accept a foreign government’s assistance in an election — and might not report it to the FBI — is an absolutely stunning statement that would seem out of bounds to any and every reader of Playbook.”

“Far be it from us to divine why the president said this, and what exactly is going through his head. But the people we spoke to Wednesday night said it is rooted in a win-at-any-and-all-costs mentality — a life-is-complicated vibe that tries to paint everyone else as rubes, and yet ignores the guts of American law. Furthermore, it reflects his thinking that he hates the idea the 2016 election was stolen from him, so he tries to rationalize the very things he and his campaign stand accused of doing.”

“In our time covering Congress — going on a decade — we’ve never heard anyone ever even privately say they would accept foreign assistance in an election. Ever. And a lot of members have said crazy stuff to us privately!”

First Read: “What’s stunning about President Trump’s admission that he’d accept dirt from a foreign government to help him win an election is not that he said it. After all, we already know that he and those around him asked for — and accepted — that help in 2016.”

“What’s stunning is that everyone should now know that the sitting president of the United States cannot ensure a fair election in 2020.”

Jonathan Bernstein: “For one thing, it would be helpful for Wray to speak up and explain why Trump is wrong. If he doesn’t do so on his own, perhaps the House Judiciary Committee could invite him to explain it to them. This would be an appropriate time, too, for former President George W. Bush to say something. (Whatever one thinks of Bush’s terms in office, it’s hard to imagine him inviting a foreign nation to disrupt our elections.) The same for any former FBI directors, secretaries of defense and state, and other heavyweights, especially Republicans.”

“But we all know the truth: This is really on the current Republicans who could do something about it. That includes the people at Fox News and other Republican-aligned media, who don’t actually have to pretend that encouraging foreign nations to influence U.S. elections is exemplary behavior for a president. And it includes Senate Majority Leader Mitch McConnell and other congressional Republicans, who have the ability to put an end to this if they want. As long as they’re all willing to join Trump in this kind of despicable behavior, there’s no reason to expect him to stop.”

“The Office of Special Counsel [Not Mueller] has recommended the removal of White House counselor Kellyanne Conway from federal office for violating the Hatch Act, which bars federal employees from engaging in political activity in the course of their work,” the Washington Post reports.

The report submitted to President Trump found that Conway violated the Hatch Act on numerous occasions by “disparaging Democratic presidential candidates while speaking in her official capacity during television interviews and on social media.”

“President Vladimir Putin said relations between Moscow and Washington were getting worse and worse, noting in an interview published on Thursday that the current U.S. administration had imposed dozens of sanctions on Russia,” Reuters reports.

“Putin made his gloomy assessment ahead of a G20 summit in Japan later this month at which he might meet U.S. President Donald Trump.”

Well, first, Russia’s actions and attacks deserve those sanctions. Second, when a Democratic President not beholden to Russia takes office, the sanctions will actually be enforced, Russian assets will be seized, and Russian military jets and ships will be shot at when they play chicken in the air and sea.

George Conway and Neil Katyal: “Much ink has been spilled about whether President Trump committed a criminal and impeachable offense by obstructing justice. That question deserves extensive debate, but another critical question — the ultimate question, really — is not whether he committed a crime but whether he is even fit for office in the first place. And that question — the heart of an impeachment inquiry — turns upon whether the president abuses his power and demonstrates an unfitness to serve under the defining principles of our Constitution.”

“On Tuesday, Trump gave us direct evidence of his contempt toward the most foundational precept of our democracy — that no person, not even the president, is above the law. He filed a brief in the nation’s second-most-important court that takes the position that Congress cannot investigate the president, except possibly in impeachment proceedings. It’s a spectacularly anti-constitutional brief, and anyone who harbors such attitudes toward our Constitution’s architecture is not fit for office. Trump’s brief is nothing if not an invitation to commencing impeachment proceedings that, for reasons set out in the Mueller report, should have already commenced.”

Sen. Mike Rounds (R-SD) told Axios that President Trump’s trade war with China has caused the price of his state’s soybeans to plummet 20%, costing South Dakota half a billion dollars.

Sen. Marsha Blackburn (R-TN) blocked an effort by Sen. Mark Warner (D-VA) to pass a bill via unanimous consent requiring campaigns to report any offers of foreign assistance to the FBI, Axios reports.

Sen. Chuck Schumer (D-NY), responding to Blackburn’s objection, said on the Senate floor: “How disgraceful it is that our Republican friends cower before this president when they know that the things he does severely damage democracy.”

Margaret Hunter, the wife of Rep. Duncan Hunter (R-CA), formally admitted that she illegally used thousands of dollars in campaign donations for her personal expenses, the San Diego Union Tribunereports.

“Specifically, Margaret Hunter pleaded guilty to a single count of conspiracy. She faces up to five years in federal custody and a $250,000 fine when she is sentenced Sept. 1.”

“The 22-page agreement makes clear that Margaret Hunter has been cooperating with prosecutors for months — and her eventual sentence will reflect that help.”

Duncan Hunter told the Associated Press that “political reasons” prompted the U.S. Justice Department to pressure his wife to testify against him.

Speaker Nancy Pelosi “repeatedly refused to say at what point she would support impeaching President Trump, whose claim that he would possibly take foreign operatives’ dirt on a 2020 opponent was loudly condemned by her party a day earlier,” CNBC reports. Said Pelosi: “Not any one issue is going to trigger, ‘Oh, now we’ll go do this.’”

“Rep. Eric Swalwell’s (D-CA) decision to embrace calls for an impeachment inquiry on Thursday morning made him the 13th member of the panel to support such a move,” Politico reports.

New York Times: “Next year, for the first time since 1982, the program must start drawing down its assets in order to pay retirees all of the benefits they have been promised, according to the latest government projections.”

“Unless a political solution is reached, Social Security’s so-called trust funds are expected to be depleted within about 15 years. Then, something that has been unimaginable for decades would be required under current law: Benefit checks for retirees would be cut by about 20 percent across the board.”

All you have to do to fix this is to raise the income gap on the wealthy.

Boris Johnson has secured the highest number of votes in the first ballot to select the Conservative party leader and next British prime minister, the BBC reports.

“The U.S. extradition request will still have to be approved by the British courts.”

“Justice Department officials intend to interview senior C.I.A. officers as they review the Russia investigation, indicating they are focused partly on the intelligence agencies’ most explosive conclusion about the 2016 election: that President Vladimir Putin of Russia intervened to benefit Donald Trump,” the New York Times reports.

“The interview plans are the latest sign the Justice Department will take a critical look at the C.I.A.’s work on Russia’s election interference.”