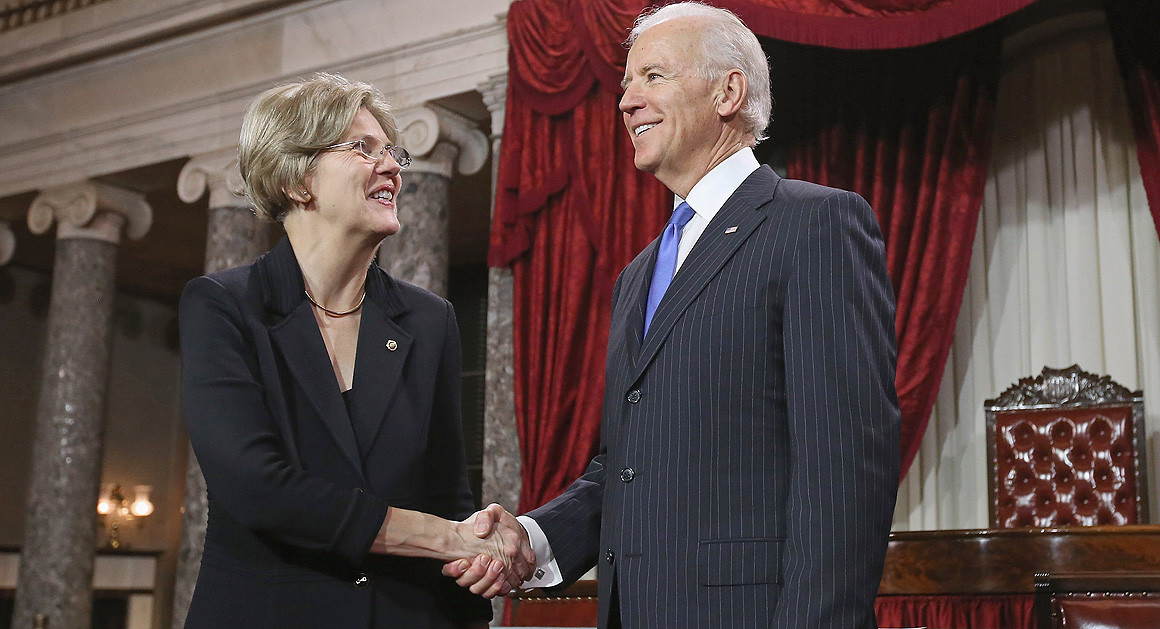 A new Monmouth poll in Nevada finds Joe Biden with a clear lead in the Democratic presidential race at 36%, followed by Elizabeth Warren at 19%, Bernie Sanders at 13%, Pete Buttigieg at 7%, and Kamala Harris at 6%.

In this primary, I think it is fair to say Elizabeth Warren has passed Bernie and is now in second place.

A new Politico/Morning Consult poll finds Joe Biden leads President Trump in a possible presidential race, 44% to 33%. Bernie Sanders also performs strongly against Trump, 42% to 32%. Match ups against other Democrats are much closer:

“At the same time, Biden isn’t an idiot. Of course he knows what the modern Republican Party is like. But like Obama before him, he also knows that lots of people really like to hear paeans to bipartisanship. We political junkies may hate it, but ordinary people who don’t inhale cable news are suckers for the idea that we can all get along if we just give it a try—and there are way more of them than there are of us. Biden knows this, so that’s what he tells people. Whether he really believes it or not matters not a whit.”

New York Times: “The bloated Democratic primary field is aggrieved, available and aggressively thirsty. Of the 23 candidates running, only eight routinely break 1 percent in national polls. Most have not yet qualified for the fall debates. And cable news channels, which have emerged as an early driving force in the race, have only so many hours of programming each day.”

“That has moved the campaign into a new, yet familiar, phase: the ritual airing of grievances. Weeks’ worth of pent-up frustration is beginning to trickle into the public arena, as a way for candidates to explain their lowly positions — both to themselves and to the voters.”

Politico: “The Vermont senator is set to deliver a full-throated defense Wednesday of democratic socialism — a label that has helped inspire a movement to elect him president while at the same time raising persistent doubts about his electability.”

A new Quinnipiac poll finds Americans think that a sitting president should be subject to criminal charges by a 69% to 24% margin. The poll finds a majority think President Trump committed crimes before he took office, 57% to 29%, but are divided 45% to 45% on whether he committed crimes while he has been in office.

Josh Kraushaar: “Trump’s clearest path to victory relies on Democrats making a series of self-destructive decisions. But even if Democrats turn leftward and nominate a weak challenger, they’d still have a credible chance at unseating Trump. The country’s rampant polarization guarantees that anyone—no matter how extreme—would be well-positioned against the president.”

“Just as Trump rallied enough skeptical Republicans to support him against Hillary Clinton, Bernie Sanders would likely win over reluctant Democrats to his side against Trump.”

Washington Examiner: “Wealthy Republican donors are preparing a multimillion-dollar effort to register more than 1 million new GOP voters in Texas for 2020 amid anxiety that President Trump could be in more trouble in this reliably red state than some in the party realize.”

Los Angeles Times: “Trump is using the advantage of incumbency, a huge pile of campaign cash and a clear path to his party’s nomination to build a digital operation unmatched by anything Democrats have. His campaign is testing all manner of iterations, algorithms and data-mining techniques — from the color of the buttons it uses on fundraising pitches to the audiences it targets with short videos of his speeches.”

“By the time Democrats pick a nominee, some of the party’s top digital strategists warn, Trump will have built a self-feeding machine that grows smarter by the day. His campaign has run thousands of iterations of Facebook ads — tens of thousands by some counts — sending data on response rates and other metrics gleaned from the platform to software that perpetually fine-tunes the campaign messages.”

“Howard Schultz, who has previously said he is considering running for president as a centrist independent, will not campaign this summer after undergoing three separate back surgeries,” Axios reports.

The HuffPost notes Schultz also made “significant cuts” to his team. He announced that he “was letting everyone go except those in senior leadership positions, adding he would not make a decision about running for president until after Labor Day.”

“Montana Gov. Steve Bullock is still on the outside looking in on the first Democratic presidential primary debate, with just hours until the deadline to qualify,” Politico reports.

“Bullock, who touts his success in a red state as a playbook for defeating President Trump next year, failed to earn 1 percent in a poll of likely Nevada caucus-goers released Wednesday by Monmouth University, leaving him one poll short of qualifying for the debates at the end of June.”

Wall Street Journal: “As Democratic debates near, some candidates are resigned to missing out.”

Frank Rich: “I have no idea who is going to be the Democratic nominee, but I don’t think it’s going to be Biden. One of the several reasons is that by focusing solely on Trump 17 months before Election Day and refusing to engage with any of his Democratic opponents, he is disrespecting not just those opponents but the majority of voters in his own party. He looked presumptuous when he blew off an Iowa event with 19 other Democratic candidates over the weekend, no matter how commendable his excuse (a grandchild’s high-school graduation).”

“In a party where every major politician (and presidential candidate) is fiercely anti-Trump, Biden isn’t even the most clever at goading him. Nancy Pelosi is the gold standard, with Pete Buttigieg and Elizabeth Warren coming up strong.”

David Weigel: “Biden has been at pains to emphasize his devotion to climate action, especially since an aide was quoted as saying Biden would take a ‘middle road’ to fighting climate change — a characterization he strongly disputes.”