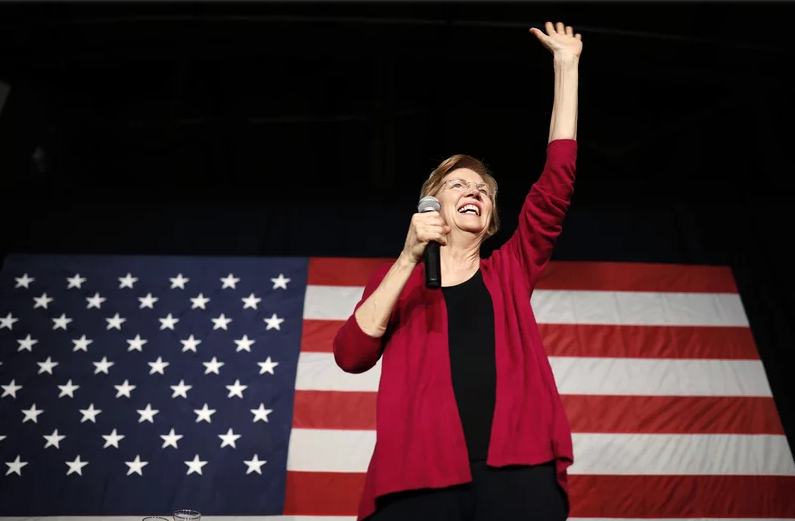 First Read finds some evidence that Democratic voters prefer the practical over the idealistic in the new Des Moines Register/CNN Iowa Poll out over the weekend:

For most Democrats, the only issue that matters is defeating Trump next year.

“In the early state where field organization has traditionally mattered the most, Sen. Cory Booker and Sen. Elizabeth Warren have quietly and patiently concentrated their resources toward building grassroots machines designed to power them on caucus night,” Politico reports.

“It showed here on Sunday as 19 Democratic presidential candidates converged for the first time in one venue to make their five-minute pitch to the party faithful.”

The Des Moines Register has each candidate’s best moment.

Washington Post: ““Six months after launching her candidacy amid blundering apologies for her longtime claims of Native American ancestry and nagging questions about whether she could compete on a national stage, Warren is experiencing something unusual in the crowded Democratic field: momentum.”

“It is not showing up in national polls, which have remained largely steady with Warren in the single digits, far behind former vice president Joe Biden. But energized crowds have been flocking to her events in early-voting states. Her nonstop stream of policy positions, which add up to what would be a restructuring of American capitalism, has helped shape the broader debate.”

Politico: “From his schedule to his messaging to his policy positions, the former vice president is carving a divergent path through the primaries based on a theory that few of his rivals appear to believe — that the Democratic base isn’t nearly as liberal or youthful as everyone thinks.”

“It’s a high-risk strategy at a time when the progressive wing is pulsing with energy. There is a danger of looking disconnected from the rising Obama coalition, or seeming to adhere to an outdated view of the party. But so far it’s working.”

Washington Post: “Biden has conducted his campaign so far as if he’s competing largely against the incumbent president, ignoring the team of opponents hoping to supplant him for his party’s nomination. That and Biden’s relatively limited footprint in Iowa have created an opening for an underdog in the first caucus state, local Democrats say.”

“Interviews with more than a dozen strategists and organizers revealed rising alarm at the lack of attention being paid to Latinos in swing states where they could decide the outcome of both the Democratic primary and the general election.”

“The presidential candidate speed dating here in the state that will start balloting for the nomination in less than eight months showcased the challenges of managing the vast Democratic field,” the Wall Street Journalreports.

“The Iowa Democratic Party’s Hall of Fame fundraiser, which on Sunday attracted 19 of the 23 Democrats competing to challenge President Trump, offered a preview of the first candidate debates in Miami over two nights later this month. The challenges were clear: limited time to make pitches and the struggle to stand out in a crowd.”

Jonathan Bernstein: “After the 2016 election, I’m not counting anyone out. That said: I think it’s starting to sink in that Senator Bernie Sanders is right at the fringes of plausibility. At best.”

“That’s what I’m seeing from the mainstream media, some liberal bloggers and sophisticated polling analysis. Recent Iowa polls show Sanders at about 15%, essentially in a three-person race for second place with Senator Elizabeth Warren and South Bend Mayor Pete Buttigieg. That’s for a candidate who won half the vote there in 2016.”

“And while Sanders is faring somewhat better nationally, that’s mainly because almost all the other candidates remain unknown to voters. As Nate Silver points out, only about 8% of Democrats say they’re definitely supporting Sanders. In other words, it’s entirely plausible that Sanders could fail to reach the delegate threshold in Iowa, Nevada, and South Carolina (and possibly New Hampshire).”

A new Reuters/Ipsos poll finds Americans are more likely to say they would reject a candidate older than 70 than a candidate who is gay.

The poll found that 48% of adults in the United States said they were “much” or “somewhat” less likely to support someone for the White House if the person was older than 70, while 34% were less likely to vote for someone who is gay.

“Democrats facing a steep uphill climb to win back the Senate want Beto O’Rourke to reconsider his long-shot bid for president and take another look at running for the Senate in Texas, especially if his White House bid fails to pick up momentum,” The Hill reports.

“They feel the same way about two other White House hopefuls who are polling at around 1 percent or lower: former Colorado Gov. John Hickenlooper and Montana Gov. Steve Bullock.”

Daily Beast: “Since the end of May, Fox Business Network and Fox News star Lisa ‘Kennedy’ Montgomery and Fox News primetime host Sean Hannity have speculated on-air, on at least four separate occasions, that the current Democratic presidential frontrunner is secretly dealing with health issues, often comparing his condition to illness-related conspiracy theories the network pushed about Hillary Clinton during the 2016 election.”

“The Biden rumor-mongering seemingly began May 29, during the broadcast of Fox News’ afternoon gabfest The Five. While assessing Biden’s candidacy, Kennedy claimed to know Democratic operatives engaged in a whisper campaign about Biden’s health.”