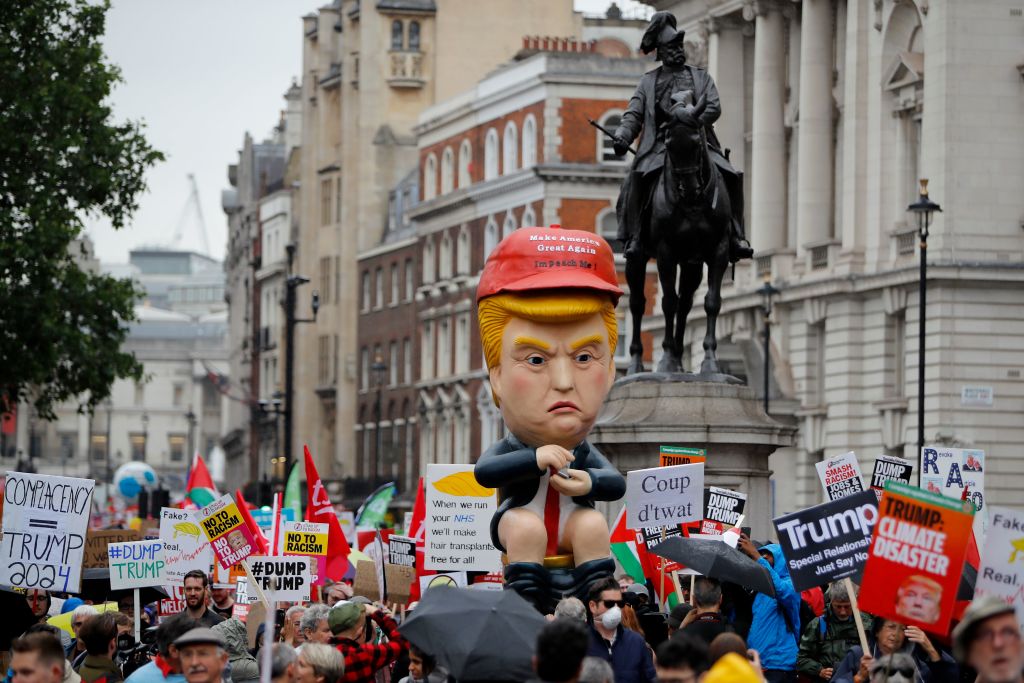 House Majority Leader Steny Hoyer said that Congress should subpoena special counsel Robert Mueller if necessary to get him to testify, The Hill reports. Said Hoyer: “I think he ought to testify. He may want a subpoena, for all I know. He indicated that his report speaks for itself. Very frankly… questioning is an important fact-finding pursuit.”

Meanwhile, a source tells CNN that the White House has directed former communications director Hope Hicks not to turn over documents related to her time in the administration to the House Judiciary Committee. However, Hicks still could turn over documents the committee has requested related to the 2016 Trump campaign, as that period cannot be covered by executive privilege.

NBC News chief foreign correspondent Richard Engel tweeted that President Trump “sounded delusional” when he referred to “thousands” of people cheering him in London in a press conference. Said Engel: “I didn’t see them.”

CNN fact checks Trump’s other statements from the press conference.

Trump said in his meeting with British Prime Minister Theresa May that the U.K. is the Unites States’ biggest trade partner, a fact that “many people may not know,” CNN reports.

That’s because it is not true: China is actually the largest U.S. trade partner. Britain is number seven.

NPR: “Challenges threatening the upcoming 2020 census could risk more than 4 million people to be missing from next year’s national head count.”

“Nationally, black residents could be undercounted by as much as 3.68 percent…. The Urban Institute also projects as many as 2.2 million (3.57 percent) Latinos and Latinas around the U.S. could be left out of the 2020 census. Children under the age of 5 — another hard-to-count group — also face an undercount as high as 6.31 percent, or about 1.3 million young children.”

“Paul Manafort, the former Trump campaign chairman who was sentenced earlier this year to four years in prison for tax and bank fraud related to his work advising Ukrainian politicians, will be transferred later this week from a minimum security facility in Pennsylvania to New York City’s Rikers Island,” a source close to Manafort told Fox News.

“Rikers Island is the famous jail in the shadow of LaGuardia Airport. It has been the temporary home of some of the most high-profile violent criminals in the city, including  David Berkowitz, the Son of Sam; and Mark David Chapman, the man who killed John Lennon.”

“Republican senators warned Trump administration officials Tuesday they were prepared to block the president’s effort to impose tariffs on Mexican imports, promising what would be GOP lawmakers’ most brazen defiance of the president since he took office,” the Washington Post reports.

“During a closed-door lunch, at least a half-dozen senators spoke in opposition to the tariffs, while no one spoke in support.”

“Senators told officials from the White House and Department of Justice that there could be a disapproval vote if Trump moves forward — and this time, unlike with an earlier disapproval resolution, opponents of Trump’s tariffs could have enough support to override a veto.”

At a press conference Tuesday in the UK, Trump showed no signs of backing off his tariff strong-arming.

“I don’t think they will do that; if they do it’s foolish,” he said of the threatened Republican vote. “There’s nothing more important than borders. I’ve had tremendous Republican support.”

Elaina Plott: “According to current and former aides, who requested anonymity to speak freely, when Trump feels he has lost control of the narrative, he grasps at two issues: border security and trade. Those aides said he sees these topics as reset buttons, ways to rile both Democratic and Republican lawmakers and draw attention away from whatever dumpster fire is blazing in a given week.”

Said one campaign adviser: “Whenever a negative story comes around, his instinct is to pivot to immigration or trade. It’s kind of like his safety blanket. He knows that Fox and conservative media will immediately coalesce and change what the base is talking about.”

Sad and Useless compiled the funniest protest signs from President Trump’s visit to the United Kingdom.

“Donald Trump asked for a meeting with Boris Johnson during his U.K. visit, but was turned down,” Politico reports.

“According to an official close to Johnson, the U.S. president called the former foreign secretary and suggested they have a one-to-one meeting. The official said that Johnson thanked Trump but declined the invitation as he had to prepare for a Tory leadership campaign event.”

Virginia Gov. Ralph Northam (D) will recall lawmakers to the state Capitol in coming weeks to take up a package of gun-control legislation, the AP reports.

“The Democratic governor has long been an advocate for stricter gun control. But staunchly pro-gun Republicans who controlled the Virginia General Assembly have rejected previous efforts at limiting gun access.”

“Its draconian terms suggest a penuriousness at odds with his public image as a free-spending billionaire in his gilded triplex penthouse. And its confidential financial statements included in the agreement is a sketch of Trump’s immense privilege and the wealth he squandered, telling in both what it illuminates and what is obfuscates.”

“More than anything, the prenup shows how fiercely Trump wanted to protect the money he did have. Maples reportedly wanted $25 million, but Trump agreed to pay her only $1 million if they separated within five years, plus another $1 million to buy a house. Trump also would stop making $100,000 child support payments for Tiffany when she turned 21. The agreement states that Trump’s payments would cease earlier if Tiffany got a full-time job, enlisted in the military, or joined the Peace Corps.”

“Mexico said on Monday it would reject a U.S. idea to take in all Central American asylum seekers if it is raised at talks this week with the Trump administration, which has threatened to impose tariffs if Mexico does not crack down on illegal immigration,” Reuters reports.

“Congressional Republicans have begun discussing whether they may have to vote to block President Trump’s planned new tariffs on Mexico, potentially igniting a second standoff this year over Trump’s use of executive powers to circumvent Congress,” the Washington Post reports.

“Republican lawmakers aren’t eager to be drawn into a conflict with the president. But some feel they might have to take action following a growing consensus within the GOP that these new tariffs would amount to tax increases on American businesses and consumers — something that would represent a profound breach of party orthodoxy.”

“Republican lawmakers have [also] privately signaled to the White House that President Donald Trump should not nominate Ken Cuccinelli as the head of United States Citizenship and Immigration Services — or else he risks having another high-profile pick forced to withdraw,” CNN reports.

“The owners of a luxury hotel in Panama City that ousted the Trump Organization as property managers last year accused it on Monday of evading taxes in Panama and creating a ‘false light’ around the hotel’s finances,” the New York Times reports.

“The accusations, made in a legal filing in Manhattan federal court, are fraught with potential diplomatic and legal complexities for President Trump. They essentially assert that his family business cheated a foreign government, a claim the Trump Organization characterized in a statement as ‘completely false.’”

HuffPost: “With commercial tenants fleeing his Trump Tower, President Donald Trump continues to spend $37,500 a month of campaign money for office space there — with some of that cash destined for his own wallet ― even as thousands of square feet go unused at a newly opened office in northern Virginia.”

“No more than ‘four or five’ campaign staffers work at Trump’s Manhattan base, according to an informal adviser close to the White House, where the campaign rents a few thousand square feet as its ‘headquarters.’ The per-square-foot cost is likely at least triple what the [RNC] pays for the much larger space it shares with the campaign in Arlington, according to a HuffPost analysis.”