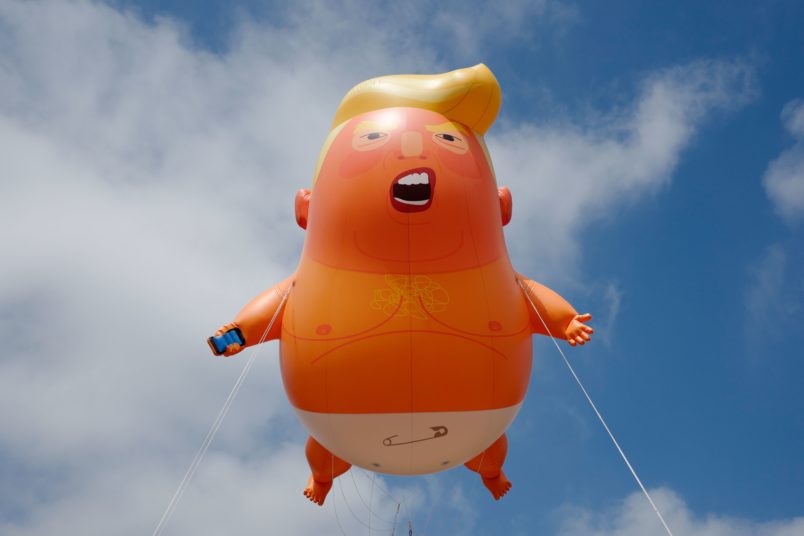 The House Judiciary Committee announced that it would hold a series of hearings on the Mueller report beginning on June 10, Axios reports.

The first hearing will be titled, “Lessons from the Mueller Report: Presidential Obstruction and Other Crimes,” and will feature former White House counsel John Dean, whose cooperation in the Watergate scandal famously made him a star witness against President Richard Nixon.

“George Nader, who had a previous criminal record on such charges, was charged in federal court in Virginia, and is expected to make an initial court appearance in New York.”

“Nader played an unusual role as a kind of liaison between Trump supporters, Middle East leaders, and Russians interested in making contact with the incoming administration in early 2017.”

President Trump has been greeted with giant projections of USS John McCain and Obama approval ratings on London landmarks during his state visit.

“The Supreme Court on Monday rejected the Trump administration’s request to fast track a decision on whether it will hear a case over the president’s rescission of the Deferred Action for Childhood Arrivals (DACA) program,” The Hill reports.

“The justices, in an unsigned order, denied the request filed on behalf of the administration last month to expedite their decision on whether to review the case.”

But Trump did get a win in a lower court yesterday: “A federal judge in D.C. has rejected an effort by House Democrats to block President Trump’s use of emergency powers to reprogram military funds for his border wall,” Axios reports. Said Judge Trevor McFadden: “This is a case about whether one chamber of Congress has the ‘constitutional means’ to conscript the Judiciary in a political turf war with the President over the implementation of legislation… While the Constitution bestows upon Members of the House many powers, it does not grant them standing to hale the Executive Branch into court claiming a dilution of Congress’s legislative authority. The Court therefore lacks jurisdiction to hear the House’s claims and will deny its motion.”

McFadden was appointed to the federal bench by Trump.

London Mayor Sadiq Khan writes in The Observer that it is “un-British to be rolling out the red carpet” for President Trump.

“This is a man who tried to exploit Londoners’ fears following a horrific terrorist attack on our city, amplified the tweets of a British far-right racist group, denounced as fake news robust scientific evidence warning of the dangers of climate change, and is now trying to interfere shamelessly in the Conservative party leadership race by backing Boris Johnson because he believes it would enable him to gain an ally in Number 10 for his divisive agenda.”

“That’s why it’s so un-British to be rolling out the red carpet this week for a formal state visit for a president whose divisive behaviour flies in the face of the ideals America was founded upon – equality, liberty and religious freedom.”

And that is probably why President Trump tweeted just as he arrived in London: “Sadiq Khan, who by all accounts has done a terrible job as Mayor of London, has been foolishly ‘nasty’ to the visiting President of the United States, by far the most important ally of the United Kingdom. He is a stone cold loser who should focus on crime in London, not me……”

He added: “….Kahn [sic] reminds me very much of our very dumb and incompetent Mayor of NYC, de Blasio, who has also done a terrible job — only half his height.”

“Inflation hit 130,000 per cent in Venezuela last year, the country’s central bank has said in a rare official acknowledgement that the economy is in meltdown,” the Financial Times reports.

“In a series of spreadsheets published on its website, the bank said that Venezuelan gross domestic product contracted by 22.5% year-on-year in the third quarter of 2018 — the most recent period for which figures were available.”

“[Yesterday] the state of Alabama marks the birthday of Jefferson Davis, who served as president of the Confederate States of America from 1861 to 1865. A state holiday, state offices are closed throughout Alabama. Davis, who at one point owned more than 100 slaves, led a government resting on the principle of white supremacy.”

In response, the Montgomery Advertiser published “the testimonies of nine African Americans held in human bondage, all interviewed in Alabama in 1937.”

Jared Kushner told Axios on HBO that he doesn’t know whether he’d call the FBI if he were to receive an email today like the one before the campaign’s Trump Tower meeting, which had the subject line: “Re: Russia – Clinton – private and confidential.”

Kushner said this after a tense exchange about the email he received to set up the infamous Trump Tower meeting.

President Trump ripped CNN as he arrived in London, complaining that as his primary source of U.S. news in the U.K. it was “negative” and “so much Fake News.”

Said Trump: “After watching it for a short while, I turned it off.” He added: “Very bad for U.S. Big ratings drop. Why doesn’t owner AT&T do something?”

Roger Stone posted and then deleted an inflammatory online call that former CIA Director John Brennan be “hung” for treason, the HuffPost reports.

Stone is under a gag order as he awaits federal trial on charges related to his work on Trump’s 2016 campaign.

“Connecticut is poised to become the seventh state in the U.S. to provide paid time off to new parents and caregivers, adding further fuel to paid family leave as an issue in the 2020 elections,” the HuffPost reports.

“Democratic governor Ned Lamont plans to sign the bill ‘ASAP’… When he does, Connecticut will join New York and New Jersey in offering the benefit, effectively making the New York metropolitan area a paid family leave zone for new parents.”

“Justice Clarence Thomas said Monday that he has ‘no idea’ where rumors started that he was going to retire from the Supreme Court this summer,” the Washington Post reports.

“Thomas, 70, did not actually say during a conversation before the Supreme Court Historical Society that he was staying on the court. But he made it sound as though rumors of his departure were groundless.”