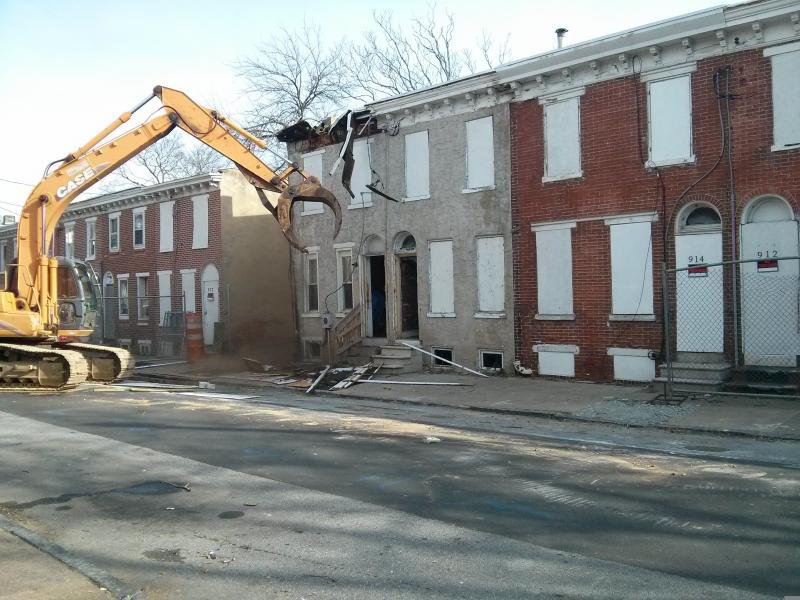 Have you been following the progress of the Wilmington “Blight Bill”? Mayor Purzycki has been working for at least two years to revise Wilmington’s Housing Code, mainly to give the City the ability to speed up code enforcement actions. Wilmington’s code enforcement is currently based on criminal penalties — meaning that people who violate code (especially for the big stuff) need to be hauled into court in order to get an official order for compliance or the imposition of penalties. That means that anyone cited for code violations (if they don’t remediate the problem) is taken to court (6-8 months to get on the docket) where you will be lucky to have a court-sanctioned resolution in 12 months plus or minus. Those penalties? Could be a $250/week fine (!), community service, orders for remediation or whatever a judge will order. In the meantime, the violation can continue — porches falling in, bad plumbing, vermin, lack or reliable heat or clean water or any of the big issues that undermine the quality of life for the people who live there and sometimes undermine it for the neighbors.

The original version of this bill did not make it out of committee. After promises not to target homeowners, to not take homeowners to sheriff sale and other items to try to convince people that this is targeted at vacant property owners and landlords, a new version of this bill was introduced earlier in May. There was a committee hearing Wednesday and it is passed to the floor of Council for a full vote.

This new bill isn’t perfect, either (and some tweaks were made before the committee meeting) but gets further in targeting one of the major vectors is disinvestment in Wilmington — absentee (as well as the just generally bad) landlords. Wilmington needs a more comprehensive approach to counteracting disinvestment in some of its neighborhoods and needs to better talk about what they are trying to get done. Because before all of these bills get considered there is a giant disinformation program designed to fire up people’s anxieties about losing their homes but also objectively stands with the very forces of disinvestment they keep telling people they are trying to protect them from. In this instance, the disinvestment they are protecting is that which occurs by supporting the Wilmington slumlord model.

It’s really heartbreaking, because all of this disinformation stands in the way of trying to address one of the biggest problems with Wilmington’s housing stock. It tells people that the tenants in these buildings will be even more put upon than they are now — living with buildings that landlords just don’t invest in. Importantly, it tells the people who own homes and live in these neighborhoods that it is OK for these slumlords to steal value from their homes too. So let’s take a look at some of it. These examples come from a website that has been in wide circulation among the people who think they need to keep slumlords in business — The Wilmington Neighborhoods Coalition (NOTE: the renters page where these claims come from has been removed, replaced with claims of victory) telling these falsehoods to renters in Wilmington:

CLAIM: Renters would be required to let the Housing Inspector inside the house.

FACT: This is true. And this is not a new feature of this new revision. If you look at the current Wilmington code, this is already in force and has been since at least 1994. STILL, this has been invalid for a number of years since case law has judged that entrance to an apartment would need a warrant. And I would be very surprised to find that this requirement isn’t already a feature in most standard leases here. This will change in the next revision to reflect current legal requirements.

CLAIM: Renters would not be allowed to neglect the maintenance of the unit “such that it has an injurious effect on the health, safety and welfare of the occupants themselves or of immediate neighbors”.

FACT: This is true. And this is not a new feature of this new revision. This requirement (as are multiple others required of occupants) has been in force under Wilmington code since at least 1968. And again, I’d be surprised if this is not a feature in a standard Wilmington lease.

CLAIM: Renters would be responsible for:

FACT: This is true. Again, not a new feature of this new revision and has existed since at least 1968.

So where’s the problem? We have people who are picking out features of CURRENT CODE and shouting to renters in Wilmington that they are going to be held accountable for a bunch of new responsibilities if this bill passes. It’s untrue. What Wilmington renters might be facing is better enforcement of current code, now with potential civil fines of $250/week. Which sounds onerous, but couple that with renewed enforcement of the responsibilities of landlords (a pretty detailed list) with civil fines, you start turning disinvestment problem around because now landlords no longer have the possibility of gaming the court system to put off needed repair and upgrades.

I could do this all day given the list of bad information that is being disseminated here. (And I’ll note that the bad information relating to renters is now removed from the website.) But this tactic of pushing a bunch of buttons to pretend that there is an effort to protect ANYONE here avoids some serious discussion about a couple of important issues here:

There’s probably more questions, but these are the first ones. It just doesn’t help the conversation to pull out a bunch of bullet points THAT ARE ALREADY IN THE CODE and spin up a narrative that represents them as brand new requirements that we should all want to avoid. Don’t like these ancient provisions in the code? Then let’s talk about what is better and stop misinforming people.

That said, I do think that the enforcement matrix could be improved. And L&I priorities can be more transparent and subject to adjustment over time. AND — very importantly — we just have to invest in some of our homeowners who need the help.

I don’t completely understand why it was necessary to resort to manufacturing this bad narrative about this bill. Certainly there is plenty of opportunity to fix this and that requires City Council to come to the table and roll up their sleeves rather than throw stones. Throwing stones is not governing and that is what people expect from every single one of them. This bill has plenty of room for improvement. Time to get in the room and improve it.

Or clearly explain why you are trying to maintain the disinvestment in some of our neighborhoods. There are plenty of Wilmingtonians who want to hear why you would tolerate slumlord behavior in neighborhoods not your own.

**You can see this code yourself — the revised code markup is below (although this does not include changes made in the last 24 hours). The current Wilmington code is here.