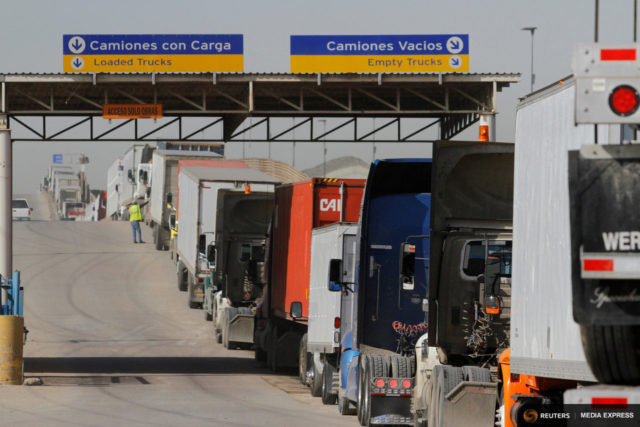 President Trump said  that he planned to impose a 5% tariff on all imported goods from Mexico beginning June 10, a tax that he said would “gradually increase” until Mexico stopped the flow of undocumented immigrants across the border, the New York Times reports.

Is Trump bluffing? Playbook: “Maybe, yeah. But honestly, we don’t know, and in the political and economic sphere, it would be irresponsible to believe he is bluffing — given what’s at risk. We are told he likes tariffs because they can be enacted unilaterally and pulled back on demand. The president has left himself wiggle room: He is the sole arbiter of the standard he set for imposing the new tariffs — whether Mexico is doing enough to curb illegal immigration.”

Jonathan Swan: “As Trump announcements go, his planned tariffs on Mexican goods appeared more orchestrated than most with a tweet, a presidential statement from the press office and a background call with reporters.”

“But behind the scenes, it was an administration-wide scramble. As with many presidential ‘announcements,’ this once sprang from intense frustration and boiled over quickly with staff rushing to react. While the plan was hurried out the door to appease Trump, he has been privately talking about doing this for a while.”

“The White House has made a number of immigration demands of Mexico over the past several months, but Trump has not defined what they need to show him… The president’s next move may depend as much on his mood as anything else.”

“U.S. Trade Representative Robert Lighthizer has argued that tariffs on Mexico further cloud prospects for ratification of the U.S.-Mexico-Canada Agreement, the proposed successor to Nafta that is already facing significant hurdles in the Democrat-controlled House.”

CNBC: “The tariff was pushed by advisor Stephen Miller, an immigration hawk.”

“The surprise decision to announce the tariff plan came as Trump was ‘riled up’ by conservative radio commentary about the recent surge in border crossings.”

The New York Times‘ Maggie Haberman told CNN that she doesn’t believe President Trump ever actually read the Mueller report and that seeing Robert Mueller discuss his findings on television “spooked him.”

Said Haberman: “When he hears Mueller say that on TV, again, him interpreting everything through the screen that is in front of him, I think that that had much more resonance than almost anything else that has happened.”

She added: “He saw Mueller in the box, and I think that that spooked him.”

She continued on Twitter: “It isn’t real to Trump unless there are tapes or photos. So Mueller speaking for the first time on the TV was significant.”

“The Justice Department on Friday released a transcript of a call from Donald Trump’s attorney John Dowd to Rob Kelner, the lawyer for Trump’s former national security adviser Michael Flynn, where he sought information about Flynn’s discussions with the special counsel,” CNN reports.

“However, the Justice Department refused to turn over transcripts of Flynn’s calls with Russian officials, including then-Russian ambassador Sergey Kislyak, as was expected after Judge Emmet Sullivan ordered prosecutors to file those publicly.”

“Separately, the Justice Department hasn’t released any additional parts of the Mueller report that were previously confidential. The judge had told prosecutors they needed to make public redacted sections of the report that pertained to Flynn by today.”

“President Trump on Thursday threatened to hit Mexico with new tariffs, escalating his immigration fight with America’s largest trading partner. And with that, he showed, once again, that he’s ready to employ trade as an all-purpose tool for his policy goals,” the New York Times reports.

“Of course, Mexico isn’t Mr. Trump’s only target. Far from it. In fact, what he’s taking on is broader than any particular country. He is challenging the post-World War II consensus that free trade enriches the world.”

Jonathan Chait: “After the legal Establishment had granted him the benefit of the doubt, Attorney General William Barr has shocked his erstwhile supporters with his aggressive and frequently dishonest interventions on behalf of President Trump. The spectacle of an esteemed lawyer abetting his would-be strongman boss’s every authoritarian instinct has left Barr’s critics grasping for explanations. Some have seized on the darker threads of his history in the Reagan and Bush administrations, when he misled the public about a secret Department of Justice memo and helped cover up the Iran-Contra scandal.”

“But Barr’s long, detailed interview with Jan Crawford suggests the rot goes much deeper than a simple mania for untrammeled Executive power. Barr has drunk deep from the Fox News worldview of Trumpian paranoia.”

“It is hard to convey how far over the edge Barr has gone without reading the entire interview, which lasted an hour.”

“New Hampshire became the 21st state to ban capital punishment on Thursday as the state Senate voted 16-8 to override the governor’s veto of a death-penalty repeal,” the New Hampshire Union Leader reports.

“Amid calls for impeachment, a persistently underwater approval rating, subpoenas for financial records and an ever-growing list of scandals, the strong economy is pretty much the only thing President Trump has going for him right now. It’s his best shot at reelection. And for some reason he seems keen on destroying it.”

House Intelligence Committee Chairman Adam Schiff (D-CA) said that Republican lawmakers had come up to him privately to “express their deep concerns and worries” about the Trump administration and offer bits of encouragement, Politico reports. Said Schiff:  “But I’m, frankly, exhausted by the private misgivings. People need to speak out.”

He added: “I think what we knew, implicitly, was that courage is contagious. But what we didn’t realize is that cowardice is also contagious. I think there’s been an epidemic of cowardice in the GOP. This president doesn’t stand for anything that the Republican Party said it stood for.”

“President Trump’s close advisers are increasingly pining for Robert Mueller to be dragged before Congress and subjected to conservative lawmakers’ questions about the conduct and outcome of his investigation,” the Daily Beast reports.

“Their embrace of such a hearing is a sharp reversal from where sentiment in the White House has been for weeks following the release of special counsel’s report… But those positions have softened, if not changed, significantly after Mueller’s public statement on Wednesday, in which he stated that he would have exonerated Trump if he could have and said that he was prohibited by Department of Justice guidelines from bringing charges against a sitting president.”

Reuters: “The North Korean leader is believed to be carrying out a massive purge to divert attention away from internal turmoil and discontent.”

More than a dozen Senate Democrats have asked the inspectors general at the Commerce Department and the Department of Justice to review new claims, made in the census citizenship question case, about the political motivations behind adding the question.

The letter, whose signatories include Minority Leader Chuck Schumer (D-NY), requests that the inspectors general investigate efforts by the administration to conceal the role played by a now-deceased GOP gerrymandering guru in getting the question added to the 2020 census.

The redistricting expert, Thomas Hofeller, helped write a draft for the formal DOJ request that the question be added to the 2020 census, according to documents put forward by the legal challengers Thursday. That draft was passed along to then-DOJ civil rights head John Gore, who authored the final request submitted to the Census Bureau. The challengers on Thursday also made public for the first time a secret 2015 study Hofeller wrote that said a citizenship question would be needed to undertake a redistricting overhaul that would boost the electoral advantages of “Republicans and Non-Hispanic Whites.”

In an interview with WNYC, House Judiciary Committee Chairman Jerry Nadler said that he still wants special counsel Robert Mueller to testify — even though Mueller has sworn to only speak about what’s in his report if he’s ultimately hauled before Congress — because doing so would put him before a television audience.

“Part of the function of Congress, just the same as the Watergate hearings 40 years ago, [is] to have a dialogue with the American people so people can make informed decisions and know what’s going on,” Nadler said. “It’s very important that he, to a television audience and to the American people, state it and answer questions about it, even if there is no new information.”

Nadler also said that he intends to meet with Democrats on his committee next week to gauge their appetite for impeachment.