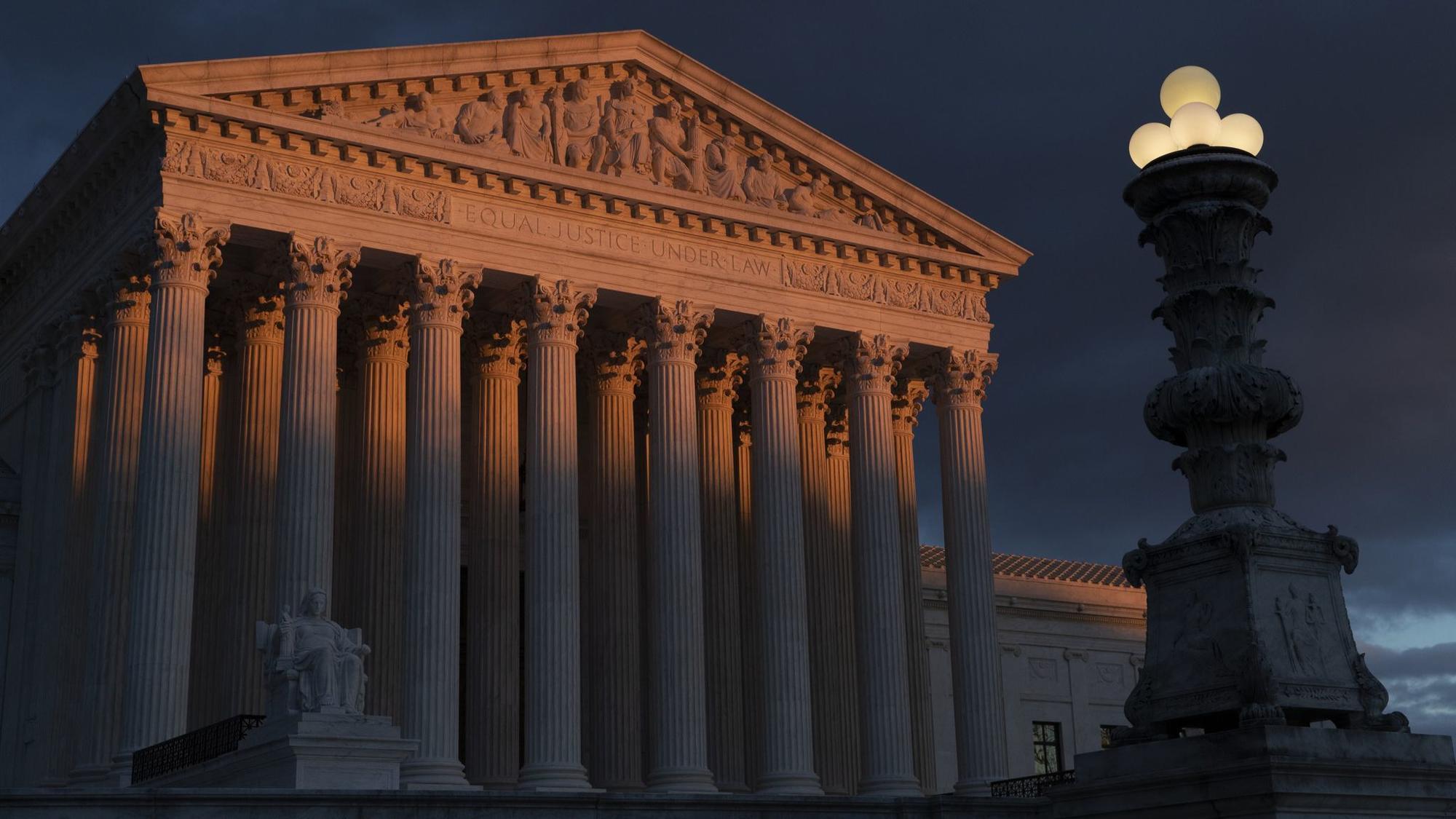 “The Supreme Court sidestepped major abortion cases, letting stand a lower-court ruling that Indiana cannot ban abortions for the purpose of sex, race or disability selection but allowing the state to regulate the disposal of fetal remains,” the Wall Street Journal reports.

“The court’s unsigned opinion appeared the product of a delicate compromise, and it stressed the justices weren’t ready—for now—to consider whether either law violates the Constitution.”

Washington Post: “The court said a part of the law dealing with disposal of the ‘remains’ of an abortion could go into effect. But it did not take up a part of the law stricken by lower courts that prohibited abortions because tests revealed an abnormality. The court indicated it would wait for other courts to weigh in before taking up that issue.”

This comes after the Supreme Court on Friday “blocked lower court rulings ordering Republican legislators in Michigan and Ohio to redraw U.S. congressional maps ahead of the 2020 elections, dealing a blow to Democrats who had argued that the electoral districts were intended to unlawfully diminish their political clout,” Reuters reports.

“The justices granted requests from Republican lawmakers in both states to put those decisions on hold, halting further action in the cases and the need to rework electoral district boundaries. The justices did not provide any explanation for their brief orders.”

“GOP senators say that if the House passes articles of impeachment against President Trump they will quickly quash them in the Senate, where Majority Leader Mitch McConnell (R-Ky.) has broad authority to set the parameters of a trial,” The Hill reports.

“While McConnell is required to act on articles of impeachment, which require 67 votes — or a two-thirds majority — to convict the president, he and his Republican colleagues have the power to set the rules and ensure the briefest of trials.”

“Transportation Secretary Elaine Chao has retained shares in a construction-materials company more than a year after the date she promised to relinquish them,” the Wall Street Journal reports.

“Shares of the company, Vulcan Materials Co. , the country’s largest supplier of the crushed stone, sand and gravel used in road-paving and building, have risen nearly 13% since April 2018, the month in which Ms. Chao said she would be cashed out of the stock, netting her a more than $40,000 gain.”

New York Times: “Parts of the federal government will no longer fulfill what scientists say is one of the most urgent jobs of climate science studies: reporting on the future effects of a rapidly warming planet and presenting a picture of what the earth could look like by the end of the century if the global economy continues to emit heat-trapping carbon dioxide pollution from burning fossil fuels.”

Christopher Steele, the former British spy who produced a dossier describing alleged links between Donald Trump and Russia, “will not cooperate with a prosecutor assigned by Attorney General William Barr to review how the investigations of Trump and his 2016 election campaign began,” Reuters reports.

Embattled Texas Secretary of State David Whitley (R), who had questioned the U.S. citizenship of nearly 100,000 people, “resigned Monday ahead of being forced out of office, stepping down as Republicans went home to defend their vulnerable majority in 2020 rather than try forcing a late vote to save Gov. Greg Abbott’s nominee (R),” the APreports.

Jonathan Bernstein: “Trump doesn’t read briefings, on politics or anything else. He doesn’t appear to have absorbed the basics of public policy, whether on health care or national security or even issues, like trade, that he cares about. Instead, he seems to pick up fragments of information in conversation or, more often, from cable television. Often, it’s partisan talking points, which isn’t surprising since much of what airs on Fox News, CNN and MSNBC consists of partisan talking points.”

“Trump then extracts some fact or detail he finds useful from that input, and comes up with his own way of expressing it. Usually, he pretties it up, smooths out any nuances and exaggerates significantly. Then he tests it out, on Twitter and especially at his rallies, working for the wording that gets the biggest reaction. And then? As far as I can tell, Trump winds up believing the final version of whatever it is he has produced. Once it’s in there, it seems to stick, although sometimes the original ‘fact’ winds up growing more distorted over time.”

“A new book from Fire and Fury author Michael Wolff says special counsel Robert Mueller drew up a three-count obstruction of justice indictment against Donald Trump before deciding to shelve it – an explosive claim which a spokesman for Mueller flatly denied,” the Guardian reports.

“The stunning revelation is contained in Siege: Trump Under Fire, which will be published a week from now, on June 4.” In an author’s note, Wolff states that his findings on the Mueller investigation are “based on internal documents given to me by sources close to the Office of the Special Counsel.”

First Read: “Out of everything that took place over the Memorial Day weekend, this might have been the biggest political news.”

“President Trump once again sided with an authoritarian leader over allies – and also took aim at a domestic rival in the exact same breath. And even more significantly was the extent to which the political world, especially the conservative media, shrugged its shoulders.”

“And what continues to stand out from Trump’s remarks on North Korea/Biden is the lack of outrage, as well as the message it sends to other world leaders. That message: Trash my domestic political opponents, and I’ll say nice things about you.”

“The last remaining abortion clinic in Missouri says it expects to be shut down this week, effectively ending legal abortion in the state,” CBS Newsreports.

“In a statement to be released later Tuesday, Planned Parenthood said Missouri’s health department is ‘refusing to renew’ its annual license to provide abortion in the state. If the license is not renewed by May 31, Missouri would become the first state without a functioning abortion clinic since 1973 when Roe v. Wade was decided.”

Politico: “Among some of these officials, that libertarian demand for medical freedom has displaced the traditional GOP view that it’s a civic responsibility to immunize your kids to prevent the spread of disease. As more politicians take an anti-mandate stand, some end up adopting bogus theories about the supposed harms of vaccination — threatening to roll back one of public health’s great achievements.”

Daily Beast: “For the past two years, it has prolifically churned out glowing coverage of the Trump administration and its achievements. OAN’s top executives have beseeched the president on Twitter to forget about Fox and to signal-boost them instead.”

“Fox News is still the president’s favorite media behemoth. But OAN’s team has been catching his eye. This year, Trump has tuned in more often than ever to OAN, two sources close to him say. There’s been a conspicuous uptick in his public promotion of OAN’s segments, including on his personal Twitter account. And, it appears, he’s even pitching the network to those roaming the halls at Mar-a-Lago.”

ABC News: “While details of the president’s event have yet to be finalized, the White House is facing pushback over the security, logistical and financial strains a presidential event would add on a day where additional security protocols already are in place for the hundreds of thousands expected to flock to the Mall to picnic and watch fireworks.”

“In addition to a presidential address, the administration has ordered that the location of the fireworks display be moved. A source familiar with planning said there have also been talks about adding additional military elements to the regular Fourth of July parade, while the president’s orders for a separate, grand military parade remain on perpetual delay.”

“President Trump told U.S. troops stationed in Japan he plans to order traditional steam powered catapults aboard American warships instead of newer electromagnetic systems that he said may not work as well during wartime,” Bloomberg reports

Said Trump: “We’re spending all that money on electric and nobody knows what it’s going to be like in bad conditions. So I think I’m going to put an order — when we build a new aircraft carrier, we’re going to use steam.”