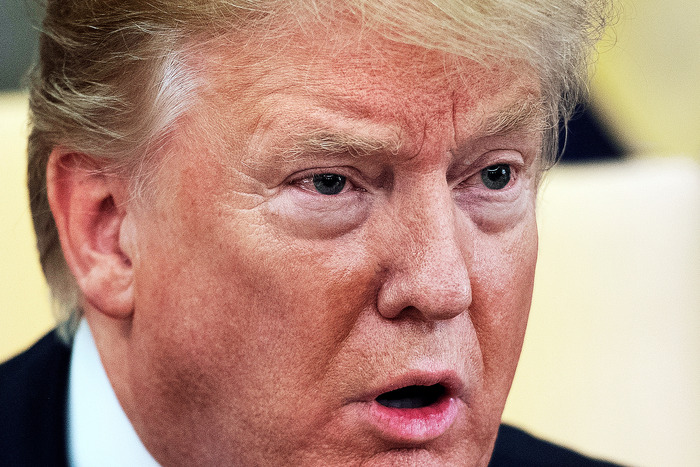 “A federal judge blocked the Trump administration from moving forward on construction projects for a wall along the southern U.S. border with funds that Congress had not approved, the first ruling on the hot-button issue,” the Wall Street Journal reports.

New York Times: “President Trump’s order allowing Attorney General William P. Barr to declassify any intelligence that led to the Russia investigation sets up a potential confrontation with the C.I.A. It effectively strips the agency of its most critical power: choosing which secrets it shares and which ones remain hidden. […]

The intelligence agencies signaled on Friday that they would not easily give up their secrets. Dan Coats, the director of national intelligence, pledged to cooperate with the review but also warned that the secrets of the intelligence community, or I.C., must be protected. […]

Mr. Coats and Gina Haspel, the C.I.A. director, will fight hard to ensure that their most valuable secrets — the identities of sources — are protected, former officials have said. Ms. Haspel has been described as a fierce political infighter, but she has also been careful to cultivate a strong working relationship with Mr. Barr, former officials said.

Vanity Fair: “Republican operatives have begun a vast, coordinated opposition-research effort to derail Biden in the primary or, at the very least, make sure he hobbles into the general election.” Said one RNC strategist: “There’s a lot of material on Biden. It’s sort of a gold mine of content.”

Washington Post: Trump and allies take aim at Biden – and his family – as their top Democratic target.

Amy Walter: “Democrats are in something of a Catch-22. There is a consensus (at least among the chattering class and highly engaged Democratic voters) that the party needs to pick a nominee who is the most electable, even if this person is not the most exciting or ground-breaking pick (i.e., a white, moderate, male). But, the ‘least risky’ candidate risks depressing Democratic base voters (especially younger voters and voters of color), the very voters Democrats need to turn out if they are going to beat President Trump.”

“New polling by Pew Research suggests that former Vice President Joe Biden — the candidate many see as the most electable — also fits the description of the type of nominee that many voters in the Democratic base say they are least enthusiastic about supporting in November of 2020. Pew asked Democratic voters to choose their level of enthusiasm for a Democratic nominee based on that candidate’s gender, race, and sexual orientation. A nominee who was female, Black, or Latino generated the most enthusiasm and the lowest percent of apathy. A nominee who was described as gay, lesbian or bi-sexual drew slightly more eagerness than wariness — 17 percent more enthusiastic to 15 percent less enthusiastic.”

Former Rep. Tom Coleman (R-MO) called for the impeachment of President Trump, who he said is an “illegitimate president,” CNN reports. Said Coleman: “I’m calling for impeachment now because the Mueller report is out, and in it special counsel Robert Mueller describes 10 obstruction of justice charges that he could not bring because of a Department of Justice rule and regulation that says you can’t indict a sitting president — that’s (reason) number one.”

He added: “Number two, I believe this is an illegitimate President because he welcomed help and influence from the Russians in his campaign. For example, his campaign chairman Paul Manafort met with a Russian intelligence asset in New York and shared with him their polling information and a strategy on how to win the Midwestern states.”

“President Trump’s bet that it’ll take years to resolve a coming court fight over his tax returns could be wrong,” Politico reports. “

Federal courts are already ruling quickly against Trump in his other attempts to block Congress. The Supreme Court could also be a dead end if the case doesn’t present new legal issues or divide appellate courts. That means there’s a decent chance the White House could lose the fight and be forced to hand over Trump’s tax records before the election.”

“Democratic entities with a stake in the 2020 election are significantly lagging behind Trump’s immigration messaging on digital platforms like Facebook and Google, according to data from the Bully Pulpit Interactive, a Democratic political and communications firm.”

“Energy Secretary Rick Perry has been a near-ghost in Washington, adhering almost too well to the first rule of working for President Trump — never overshadow the boss,” CNN reports. “Perry generates so few headlines that it’s easy to forget the longest-tenured Texas governor and two-time Presidential candidate is a Cabinet official.”

“Unlike several of his colleagues, Perry has avoided negative attention or scandal. He has also not run afoul of Trump on any major issue, and he’s maintained good relationships on Capitol Hill. He’s been a loyal soldier and a bit player in a show where Trump is the star.”

Charlie Cook: “While the Republican majority in the Senate probably shouldn’t be in much danger, if one were going to construct a scenario in which Democrats reach a 50-seat majority (with a White House win) or 51 (without one), an uncompromising assault on legal abortion would likely be an element of it.”

“Republicans lost a bunch of suburban districts last year. With actions like these, we may find out how many more there are to lose.”