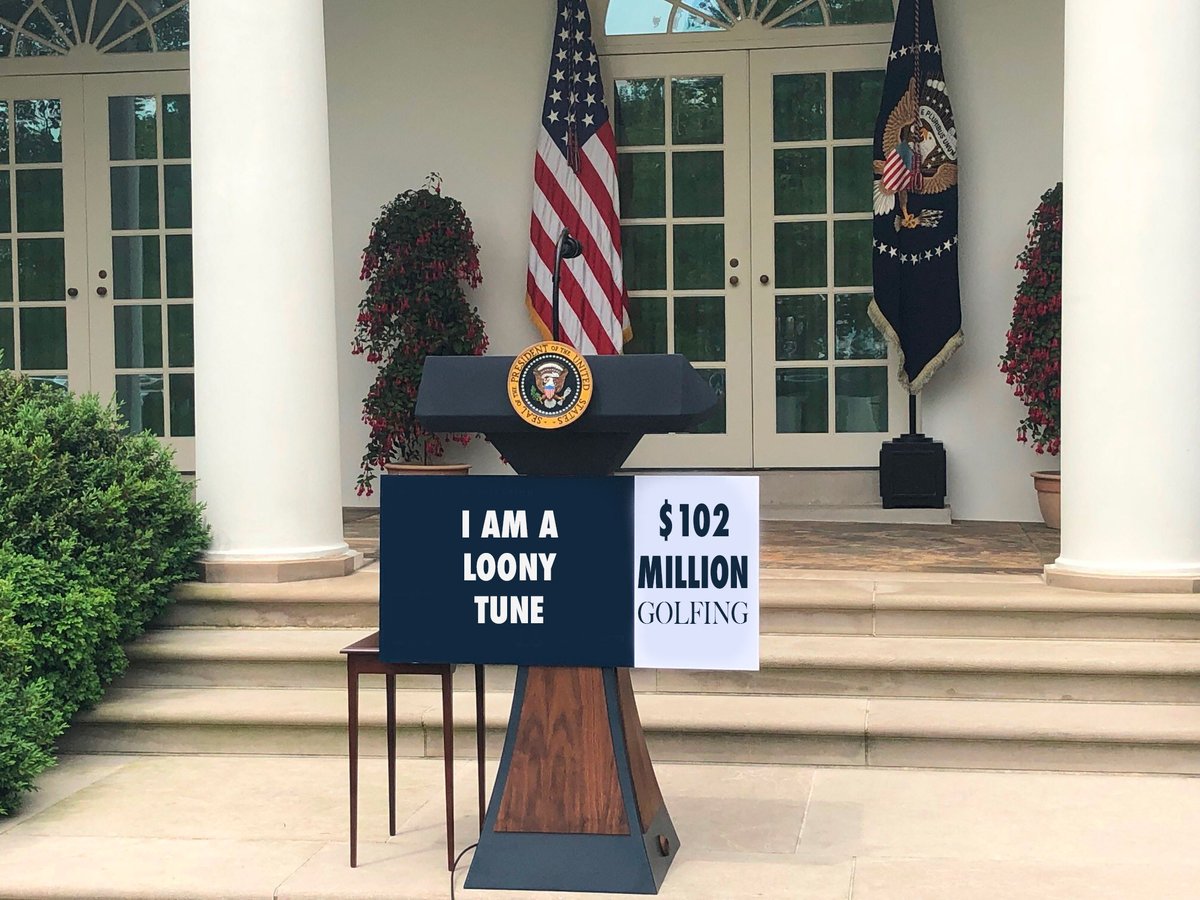 Well, that pissed the Crybaby President off. He had a meeting scheduled with Pelosi and Schumer on infrastructure. President Trump abruptly ended that meeting, saying there won’t be a deal unless they stop investigations, the Washington Post reports. He then delivered a rare statement in the Rose Garden in which he reacted angrily to House Speaker Nancy Pelosi’s earlier comment that he had engaged in a coverup. Said Trump: “I don’t do coverups. You people know that probably better than anybody.” All we know is that Trump covers up everything. Example: his tax returns.

Pelosi responded by questioning the President’s confidence in his ability to negotiate.

Washington Post: “Speaking to reporters shortly after Trump’s appearance in the Rose Garden, Pelosi and Schumer said they were taken aback by Trump’s behavior. “To watch what happened in the White House would make your jaw drop,” Schumer said.

“Something about Nancy Pelosi just gets under Donald Trump’s skin,” Politico reports. “On Wednesday, for the third time in barely six months, a meeting between Trump, the speaker and Senate Minority Leader Chuck Schumer blew up in a spectacular fashion. And in each case, Trump handed Pelosi a huge gift, a priceless moment that helped unify the Democratic Caucus behind her at a crucial time.”

Washington Post: “Usually, when President Trump is really steamed, he vents his spleen over a morning of disjointed tweets — a slow-mo meltdown. On Wednesday, it was the live-action movie version — on fast forward.”

DEMOCRATIC ASSUMPTIONS ABOUT IMPEACHMENT MAY BE WRONG. Aaron Blake: “Drawing hard and fast conclusions about American politics is often difficult, given the country’s relative youth. We quite simply don’t have that many elections with which to analyze the effectiveness of various political strategies. And that’s especially the case with impeachment, which has been undertaken only twice in American history. What’s more, these assumptions about impeachment are largely based upon a sample size of one: Bill Clinton’s impeachment in the late 1990s.”

“As I wrote a while back, the timeline of Clinton’s impeachment seemed to work against Republicans. Having begun impeachment proceedings on the eve of the 1998 election, the initial backlash was instantly able to register at the ballot box and help Democrats score unexpected success in the midterm elections. Republicans then officially impeached Clinton on Dec. 19, 1998, and Clinton’s approval rating hit its highest mark ever — 73 percent — in a Gallup poll that was conducted starting that day.”

“But that timeline is not today’s timeline. Today, there is actually time for the impeachment proceedings to register with the American people.”

TRUMP LOSES AGAIN IN COURT. A federal judge in New York said Deutsche Bank and Capital One may hand over the President Trump’s financial records to Democrats in the House after the administration attempted to block the move, the Washington Post reports.

CNBC: “Deutsche Bank for years has been the main lender for Trump, whom other banks have avoided loaning money to because of his repeated bankruptcies. Capital One is in possession of financial records related to the Trump Organization’s hotels. Neither bank had opposed the subpoenas.”

“A key congressional committee has already gained access to President Trump’s dealings with two major financial institutions, two sources familiar with the House probe tell NBC News, as a court ruling Wednesday promised to open the door for even more records to be handed over.”

“Wells Fargo and TD Bank are the two of nine institutions that have so far complied with subpoenas issued by the House Financial Services Committee demanding information about their dealings with the Trump Organization, according to the sources. The disclosures by these two banks haven’t been previously reported.”VISIT WEBSITE

TRADE WAR. Financial Times: “Roughly 47 per cent of the members of the American Chamber of Commerce in China and a similar group based in Shanghai said that on top of recently imposed tariffs, they faced retaliation such as slower customs clearance, more inspections and delayed approvals for licences, according to a survey released on Wednesday.”

“About a third of the 239 American companies surveyed said they were cancelling or delaying investments in China while about 40 per cent said they were considering relocating manufacturing facilities outside of China, with south-east Asia and Mexico among the favored destinations.”

INFRASTRUCTURE. Playbook: “Three weeks ago, Democrats left the White House optimistic, but realistic, about the chances of an infrastructure bill. Trump had agreed to spend $2 trillion on a massive infrastructure package — aides said he was giddy about the high number — and the two sides were to meet again to figure out how to pay for it. Trump, Democrats said, would come up with the funding scheme, and, indeed, policy staffers at the National Economic Council, Treasury and OMB started to work on various proposals.”

“Well, this wen about as well as any other infrastructure week. The White House is not going to present any plan to pay for rebuilding the nation’s roads and highways.”

Reuters: Democrats to press Trump on paying for infrastructure boost.

BUDGET. Politico: “Congressional leaders and the Trump administration finished a round of breakneck budget talks on Tuesday with no resolution but a commitment to keep negotiating and try to clinch a debt and spending agreement that would avoid fiscal catastrophe.”

COHEN SEARCH WARRANTS. “Special counsel Robert Mueller’s search warrants in his investigation of Michael Cohen will be made public with redactions on Wednesday, a federal judge ordered Tuesday,” CNN reports. “The five warrants in total encompass the searches the special counsel conducted between July and November 2017 of Cohen’s emails and other content related to his email accounts, the order said.”

NEW YORK V. PARDONS. “The New York Assembly passed a bill on Tuesday that closes the so-called ‘double jeopardy’ loophole, permitting state authorities to prosecute someone who receives a pardon from the president,” NPR reports. “Top Democrats in the state framed the change as a way to stand up to President Trump by removing a shield that had protected defendants from being prosecuted twice for similar crimes, and could have benefited those receiving pardons.”

IRS LEGAL MEMO. “A confidential Internal Revenue Service legal memo says tax returns must be given to Congress unless the president takes the rare step of asserting executive privilege,” the Washington Post reports.

“The memo contradicts the Trump administration’s justification for denying lawmakers’ request for President Trump’s tax returns, exposing fissures in the executive branch. Trump has refused to turn over his tax returns but has not invoked executive privilege. Treasury Secretary Steven Mnuchin has instead denied the returns by arguing there is no legislative purpose for demanding them.”

DOJ BACKS DOWN OVER CONTEMPT VOTE: “The House Intelligence Committee will not enforce a subpoena against Attorney General William Barr as planned Wednesday, after the Justice Department agreed at the 11th hour to produce the redacted material and underlying information from the special counsel’s report that the panel sought, albeit more slowly than it wanted,” the Washington Post reports.

However, Chairman Adam Schiff (D-CA) also warned that the subpoena “will remain in effect and will be enforced should the Department fail to comply with the full document request.”

1.57B for 1.7 MILES OF FENCE! Outrageous! “U.S. Customs and Border Protection has put up just 1.7 miles of fencing with the $1.57 billion that Congress appropriated last year for President Donald Trump’s wall along the Mexican border, a federal judge was told,” Bloomberg reports.

“A lawyer for the U.S. House of Representatives provided the information Tuesday to the judge in Oakland, California, who is weighing requests from 20 state attorneys general and the the Sierra Club to block Trump from using funds not authorized by Congress to build the wall.”

MNUCHIN KILLS HARRIET TUBMAN $20 BILL. Treasury Secretary Steven Mnuchin said the redesign of the $20 bill featuring Harriet Tubman will no longer be unveiled in 2020, CNBC reports. “The unveiling had been timed to coincide with the 100th anniversary of the 19th amendment which granted women the right to vote. Mnuchin said that the design process has been delayed, and no new imagery will be unveiled until 2028.”

COHEN MADE 950 TEXTS TO A COUSIN OF A RUSSIAN OBLIGARCH. “Michael Cohen exchanged more than 230 phone calls and 950 text messages over eight months with the chief executive of a U.S. money-management firm with ties to a Russian oligarch,” Bloomberg reports.

“The communications between Cohen and Andrew Intrater, the chief executive officer of Columbus Nova LCC, began on the day of Donald Trump’s election, according to a U.S. search-and-seizure warrant filed in Washington on Aug. 7, 2017, and unsealed on Wednesday.”