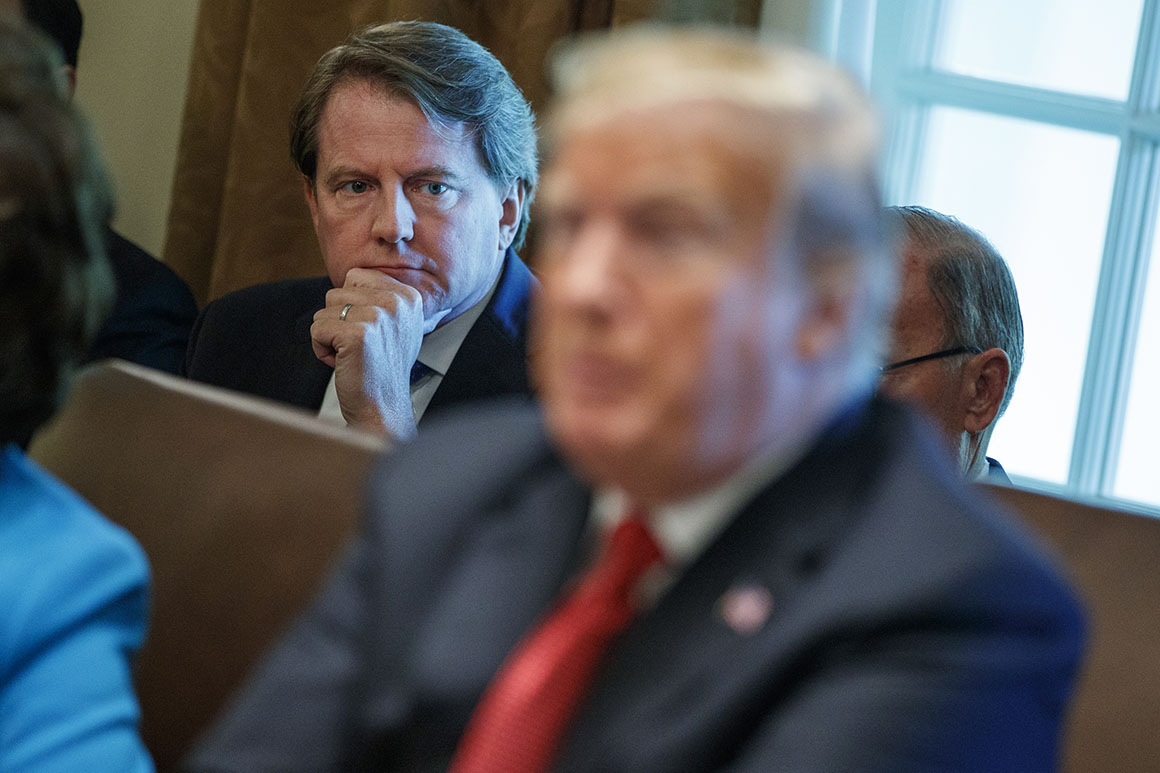 “President Trump is preparing to instruct his former White House counsel, Donald McGahn, to defy a congressional subpoena and skip a hearing scheduled for Tuesday, denying Democrats testimony from one of the most important eyewitnesses to Mr. Trump’s attempts to obstruct the Russia investigation,” the New York Times reports.

“If Mr. McGahn does not appear before the committee on Tuesday, he risks a contempt of Congress citation. At the same time, if he defies the White House, Mr. McGahn could not only damage his own career in Republican politics but also put his law firm, Jones Day, at risk of having the president urge his allies to withhold their business. The firm’s Washington practice is closely affiliated with the party.”

Michael Cohen “told a House panel during closed-door hearings earlier this year that he had been instructed by Trump lawyer Jay Sekulow to falsely claim in a 2017 statement to Congress that negotiations to build a Trump Tower in Moscow ended in January 2016,” the Washington Post reports.

“House Democrats are now scrutinizing whether Sekulow or other Trump attorneys played a role in shaping Cohen’s 2017 testimony to Congress. Cohen has said he made the false statement to help hide the fact that Trump had potentially hundreds of millions of dollars at stake in a possible Russian project while he was running for president.”

A federal judge in Washington D.C. refused to block a House subpoena to President Trump’s accounting firm for his financial records on Monday, Axios reports. Wall Street Journal: “The House Oversight Committee is seeking eight years of financial statements and other records related to Mr. Trump, his real-estate company, his foundation and other entities belonging to the president.”

“Audits of the highest-income households dropped sharply, to their lowest levels since the IRS began reporting that data in 2008. In fiscal 2018, the IRS audited 6.66% of returns of filers with more than $10 million in adjusted gross income, down from 14.52% in 2017. Among households with income between $1 million and $5 million, the audit rate dropped from 3.52% to 2.21%.”

“Republicans are moving fast to squelch Justin Amash’s rebellion against Donald Trump before his conclusion that the President ‘engaged in impeachable conduct‘ — the first by a GOP lawmaker — can gather momentum,” CNN reports. “Amash’s act of conscience on Saturday sparked immediate speculation over whether a tiny leak in the Republican dam could grow into a torrent of support running away from the President. After all, it was a rising tide of Republican disgust that eventually became the unstoppable force that led to the resignation of President Richard Nixon in 1974.”

“The early signs are that Amash’s protest will not materially shift political dynamics in Washington that mean any attempt to impeach Trump remains a long-shot scenario. But it introduced an unpredictable dimension into the building political storm over potential House testimony by Robert Mueller as Democrats accuse Attorney General William Barr of slow rolling a decision on a date for the special counsel to appear.”

Amash (R-MI) ramped up his critical remarks of President Trump, detailing in a series of tweets why he thinks Trump should be impeached for obstruction of justice. Tweeted Amash: “People who say there were no underlying crimes and therefore the president could not have intended to illegally obstruct the investigation—and therefore cannot be impeached—are resting their argument on several falsehoods.”

“President Trump warned Iran early on Monday not to threaten the United States again or it’ll face its ‘official end,’ shortly after a rocket landed near the U.S. Embassy in Baghdad overnight,” the AP reports.

“Trump’s tweet comes after he seemingly sought to soften his tone on Iran following days of heightened tension sparked by a sudden deployment of bombers and an aircraft carrier to the Persian Gulf over still-unspecified threats.

President Trump “denied reports that hundreds of migrants would be flown from the Mexican border to Florida and other areas in the U.S. interior to lessen the workload at crowded Border Patrol facilities,” USA Today reports.

“Acting Homeland Security Secretary Kevin McAleenan, also on Sunday, acknowledged that federal officials did initially alert local leaders of the possibility that migrants would be flown to two South Florida counties.” “But Trump appeared to blame the media for ‘false reporting.’”

“We’re changing laws as rapidly as we can get them through the courts.” — President Trump, in an interview on Fox News, revealing a misunderstanding of how laws are supposed to be made.

“The U.S. Supreme Court declined an opportunity to give businesses broader rights to contribute money to political candidates and causes,” Bloomberg reports. “The justices, without comment Monday, refused to question a Massachusetts law that bars for-profit corporations from making campaign donations.”

Also, “the U.S. Supreme Court on Monday deferred acting on state efforts to put more restrictions on abortion, issuing a list of orders without mentioning two pending Indiana appeals,” Bloomberg reports. “In one, the state is seeking to bar abortions motivated by the risk of a genetic disorder and require clinics to bury or cremate fetal remains. In the other, Indiana aims to reinstate a requirement that an ultrasound be performed at least 18 hours before an abortion… The court has been deliberating for months over the Indiana fetal-disposal and genetic-disorder law. Today’s inaction marks the 14th time the court has deferred action, suggesting an unusual amount of internal wrangling.”

Politico: “If the president moves ahead with 25 percent tariffs on everything China exports to the United States, it could amount to a tax hike of more than $2,000 on the average American family, swamping the reduction they won from Trump’s signature legislative achievement — the 2017 tax law.”

On Tuesday, a 16-year-old boy was found dead at a checkpoint on the U.S.-Mexico border, the fifth underage immigrant to die in American custody. His cause of death is yet unknown. According to CNN, the unnamed teenager follows an unidentified 2-year old, 16-year-old Juan de León Guttiérez, 8-year-old Felipe Gomez Alonzo and 7-year-old Jakelin Caal Maquin.

“For weeks, Europe’s far-right populists have been dashing across the Continent, joining arms and presenting themselves as a united front that will batter the political establishment and score a big breakthrough in this week’s elections for the European Parliament,” the New York Timesreports.

“Their latest group hug came in Milan on Saturday evening, where Italy’s firebrand, Matteo Salvini, preened with France’s far right icon, Marine Le Pen, and nearly a dozen other populist leaders. They bashed the European Union, migrants and Islam and promised the dawn of a new, nationalist era.”

“But it was telling what they did not talk about: the scandal that erupted this weekend in Austria, which led to the collapse of the nation’s coalition government after the far-right vice chancellor was caught on a video promising favors to a woman claiming to be a Russian investor.”

Alabama state Sen. Jim McClendon (R) was asked on the Matt and Aunie Show why he voted against a medical marijuana bill. Said McClendon: “I guess what bothers me as much as anything is I know what we’re doing is, some time along the way we are going to open a door that will eventually lead to recreational marijuana.” He added: “If there is someone that needs it, let’s say there is someone doing the cancer treatment, they have nausea problems and they need something to control it, they can get it!”

“Senior House Republicans are breaking with Donald Trump over the president’s legal claims that Congress can’t investigate whether a commander-in-chief violated the law,” Politico reports.

“Institutionalist-minded Republicans are increasingly uncomfortable with the far-reaching arguments Trump and his lawyers are using to make their case, amid fears the claims of near-immunity from congressional scrutiny will set dangerous precedents. But these lawmakers also are not preparing to act in any way that constrains Trump.”

Playbook: “In the last two weeks, Jared Kushner has launched two initiatives: his big-time immigration plan, and an economic plan for the Middle East, aimed at empowering the Palestinians.”

“What’s the common thread here? In both cases, a debate about the merits was drowned out by an apparent lack of preparation — and coalition-building — by Jared’s crew in the White House.”

“On immigration, House Republicans and Democrats were caught flat-footed by the plan, and Jared’s team — deeply distrustful of everyone in the White House — didn’t have paper immediately to explain what they were trying to do.”

“As for Mideast peace, one of the immediate storylines that emerged was that the Palestinians said they were not consulted about the Palestinian economic empowerment summit that’s a month away in Bahrain. That led Middle East reporters and longtime Israel watchers to immediately doubt Jared’s plan.”

Politico: “The four top party leaders will meet on Tuesday morning to begin talks on a potential deal to raise the budget caps, as well as a possible boost to the debt ceiling, according to multiple sources, although any agreement will be hard to reach.”

“Acting White House Chief of Staff Mick Mulvaney, Acting Office of Management and Budget Director Russ Vought, and Treasury Secretary Steven Mnuchin will take the lead for the Trump administration in the negotiations.”

New York Times: “The EPA plans to adopt a new method for projecting the future health risks of air pollution, one that experts said has never been peer-reviewed and is not scientifically sound.”

“The immediate effect of the change would be to drastically lower an estimate last year by the Trump administration that projected as many as 1,400 additional premature deaths per year from a proposed new rule on emissions from coal plants. That, in turn, would make it easier to defend the new regulation.”