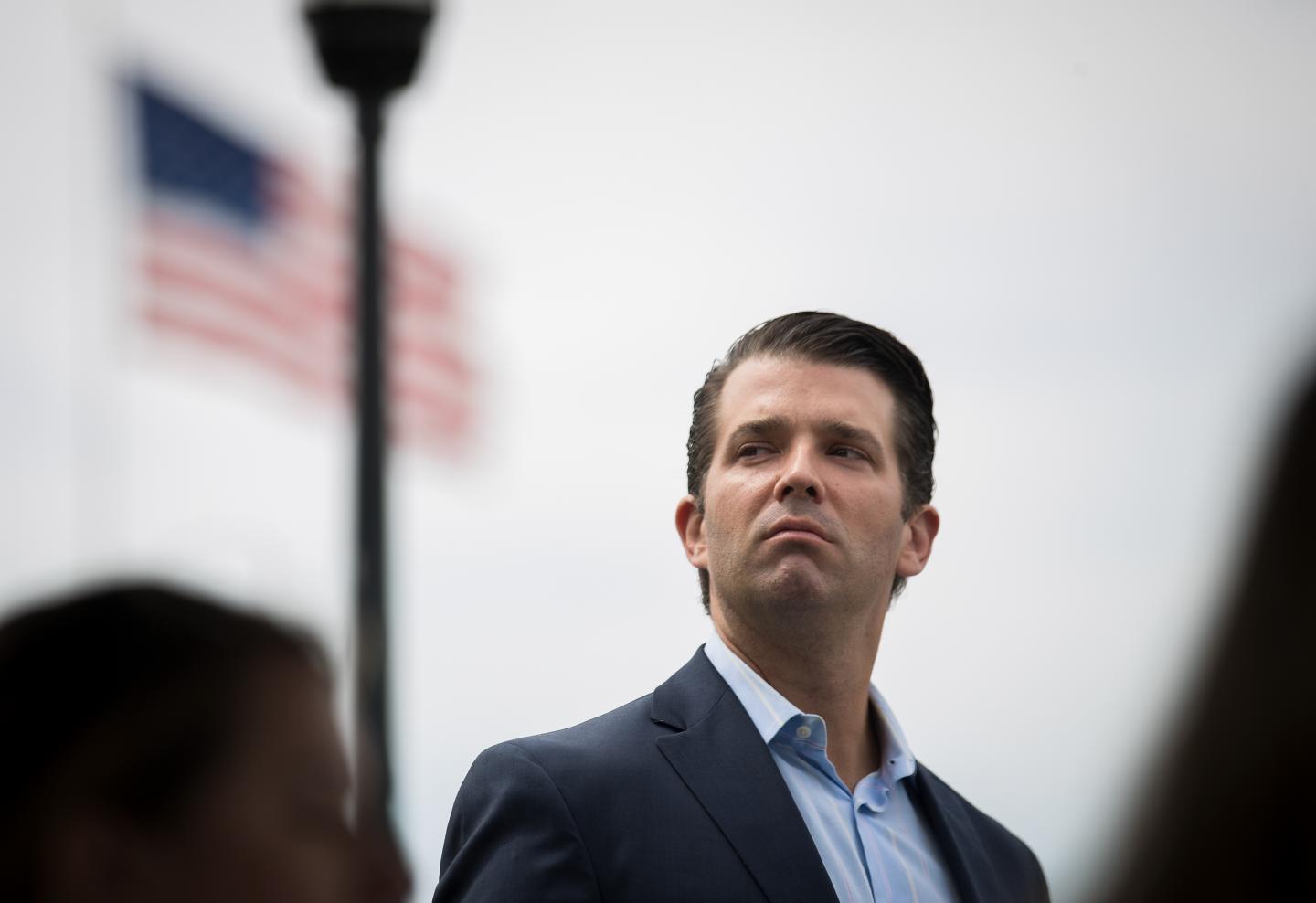 Donald Trump Jr. and the Senate Intelligence Committee have reached a deal for him to speak to the committee again, the New York Times, The Hill and CNN reported. The agreement heads off a major dispute over a subpoena the committee issued Trump Jr., after he reportedly twice bailed on plans to come in voluntary for additional question.

Said Trump: “Boy, you got some beauties there. Three hundred fifty million people and that’s the best we can do. I don’t think so.”

Jonathan Chait: “President Trump’s progress in corrupting the Department of Justice — and, to some extent, the entire federal government — into a weapon of his autocratic aspirations relies on the acquiescence of figures like Rod Rosenstein. It is the Rosensteins who translate the president’s lizard-brain impulses into practical directives and create a patina of normalcy around them. (Or, in some increasingly rare cases, refuse to do so.)”

“And so Rosenstein’s spate of valedictory remarks attempting to cleanse and justify his service to Trump give us real insight into the worldview of the compliant bureaucratic functionary.”

Mehta “indicated that he would have trouble ruling that Congress’ goal in accessing the president’s records was unconstitutional — as Trump’s lawyers have argued — and he underscored that he believes Congress has a significant ‘informing function’ that doesn’t necessarily require an explicit legislative purpose to justify an investigation involving the president.”

“A federal grand jury on Tuesday issued a 38 count indictment against the former insurance lobbyist and long-time representative of the Georgia Christian Coalition, alleging he committed fraud through a series of insurance-related schemes.”

“The proceeds of the alleged schemes earned him millions, some of which he even used for his campaign for statewide office.”

“The House Intelligence Committee is investigating whether lawyers tied to President Trump and his family helped obstruct the panel’s inquiry into Russian election interference by shaping false testimony,” the New York Times reports.

“The line of inquiry stems from claims made by the president’s former personal lawyer and fixer, Michael Cohen, who told Congress earlier this year that the lawyers in question helped edit false testimony that he provided to Congress in 2017 about a Trump Tower project in Moscow. Mr. Cohen said they also dangled a potential pardon to try to ensure his loyalty.”

Florida Gov. Ron DeSantis (R) “met with the FBI and the U.S. Department of Homeland Security last week to discuss the revelation in the Mueller report that ‘at least one’ Florida county had its election information accessed by Russian hackers in 2016,” the Tampa Bay Times reports.

“On Tuesday, DeSantis told reporters that he had been briefed on that breach — which actually happened in two counties in Florida — but that he couldn’t share which counties had been the target.”

But, he added: “Would I do that? Absolutely. But we have not planned for that. Hopefully we won’t have to plan for that. If we did that we would send a hell of a lot more troops than that.”

“A Ukrainian lawmaker accused his country’s top prosecutor of manufacturing a ‘conspiracy’ about U.S. Democratic presidential candidate Joe Biden, adding to a political intrigue playing out from Kiev to Washington,” Bloomberg reports.

“The lawmaker, Serhiy Leshchenko, said he had been given parts of a letter written by the prosecutor with the intent of currying favor with the Trump administration. The letter was sent by the prosecutor through unofficial channels to President Donald Trump’s personal lawyer Rudy Giuliani.”

“Senior administration officials tell Axios that a trade deal with China isn’t close and that the U.S. could be in for a long trade war.”

“A senior administration official said the differences between the two sides are so profound that, based on his read of the situation, he can’t see the fight getting resolved before the end of the year.”

One former aide said there’s little point trying to persuade Trump that China doesn’t actually pay the tariffs, because that’s what he believes: “It’s like theology.”

Tim O’Brien: “As China and the U.S. dig in for what may become a protracted and possibly very painful trade war, a lot of time is being wasted trying to divine whether President Trump has a strategy.”

Catherine Rampell: “Republicans, of course, are too cowardly to challenge Trump on much of anything. But Democrats, particularly those angling for the presidency, should be shouting from the rooftops. They should be sharing soybean-farmer sob stories and damning stats with any voter still considering following Trump off the protectionist cliff. Especially given academic research finding that ‘Trump Country’ has been hurt most by his trade conflicts.”

“Instead — with rare exceptions — Democrats have been muted or mealy-mouthed in their criticism. Perhaps this is because, when it comes to trade policy, most of them don’t have a leg to stand on.”