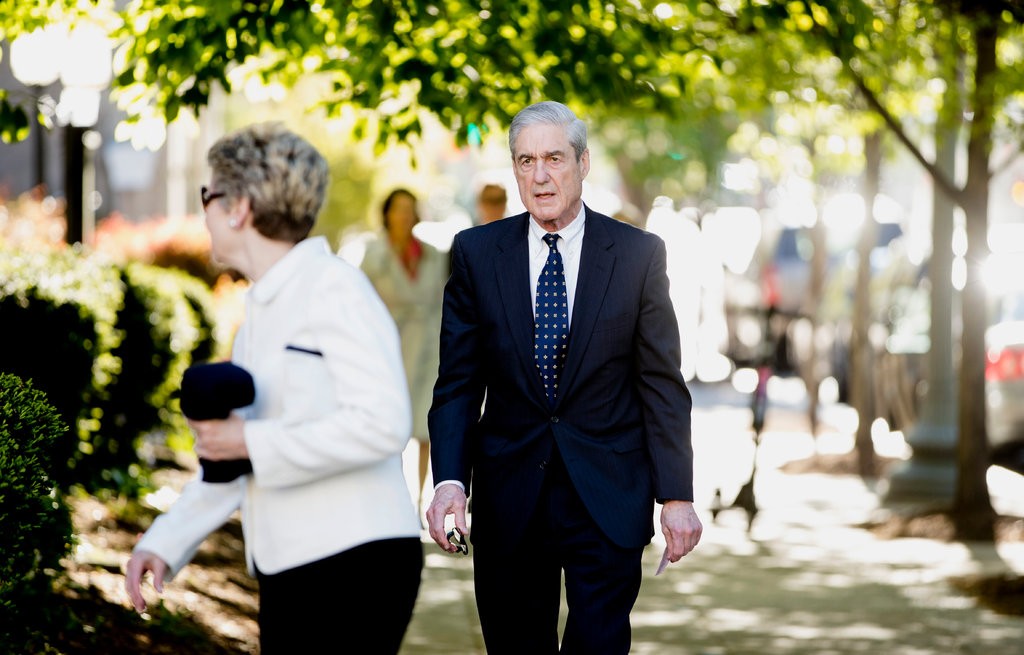 The House Judiciary Committee and a representative for special counsel Robert Mueller have agreed to a “tentative date” of May 15 for Mueller to testify about his investigation into Russian interference in the 2016 election.

Washington Post: “The committee has been seeking to hear from Mueller amid disagreements about whether Attorney General William P. Barr mischaracterized the special counsel’s report in his congressional testimony and statements.”

President Trump tweeted that special counsel Robert Mueller “should not testify on the findings of his probe into Russian election interference, suggesting it was an attempt by Democrats to renew scrutiny on the White House after the release of Mueller’s long-awaited report,” The Hill reports.

What are you afraid of, Donny? I thought Mueller totally exonerated you?

“Speaker Nancy Pelosi does not believe President Trump can be removed through impeachment — the only way to do it, she said this week, is to defeat him in 2020 by a margin so big he cannot challenge the legitimacy of a Democratic victory,” the New York Times reports. Said Pelosi: “We have to inoculate against that, we have to be prepared for that.”

“May’s public overture, in an op-ed for the Mail on Sunday, comes after a month of talks among top Conservative and Labour Party officials. The prime minister wants to get a Brexit deal through parliament by June 30, so that MEPs elected in the European Parliament election due to be held May 23 do not need to take their seats.”

The Hill: “GOP leaders know impeachment divides Democrats, and see a clear political advantage in promoting the debate. The Republicans’ campaign arm is steadily blasting emails linking moderate Democrats in swing districts to the impeachment effort. And a growing number of GOP lawmakers are all but daring Democratic leaders to launch the process while it remains unpopular with voters — a strategy not overlooked by top Democrats vowing to resist the bait.”

A new NBC News/Wall Street Journal poll finds 60% of Americans say President Trump has been dishonest in the Russia investigation, while only 37% believe the report by special counsel Robert Mueller clears the president of wrongdoing.

Still, the public remains divided on impeaching Trump, with nearly half of respondents opposing holding impeachment hearings, and with the other half supporting either immediate impeachment proceedings or future congressional investigations to study the issue further.

The poll also finds 46% of Americans approving of Trump’s job — up 3 points since March.

“The country’s most powerful liberal donor club is reshaping its spending for the 2020 election, playing down longtime relationships with groups in Washington and instead preparing to pour $100 million into key states to help defeat President Trump,” Politico reports.

“The group, the Democracy Alliance, wants to fund everything from programs combating social media disinformation to candidate training sessions leading up to the election and the next round of redistricting.”

Pew Research: “During the last presidential election, nearly all campaign events were held in just 12 states… Nearly two-thirds of events were held in Florida, Michigan, North Carolina, Ohio, Pennsylvania and Virginia. Only Virginia voted for Clinton.”

President Trump “initiated a lengthy call with his Russian counterpart on Friday, in which Vladimir Putin urged sanctions relief for North Korea and warned against interference in Venezuela,” Bloomberg reports. “The leaders’ call lasted for 1.5 hours.”

“Trump told reporters at the White House that Putin had assured him Moscow isn’t seeking to ‘get involved’ in the crisis in Venezuela, despite assertions by the U.S. president’s top national security advisers that the Kremlin is offering critical support to Nicolas Maduro’s regime… The conversation, which Trump went on to describe as ‘very positive,’ appeared to be another example of Trump taking Putin’s claims at face value despite contrary evidence from his own government.”

“In addition to the $175,000 price tag on the voter file, according to a copy of the agreement obtained by BuzzFeed News, candidates who purchase the voter file must also agree to appear at one or more DNC fundraising events every three months during the duration of their bid for the nomination. At each fundraising event appearance — dubbed ‘signature event(s)’ in the term sheet — candidates will also be asked to record a short video in support of the DNC.”

“Campaigns must also sign at least one DNC fundraising email every three months, with donations split evenly between the campaign and the DNC.”

So long as each campaign is treated the same, I have no problem with this.

New York Times: “Likability: It is nebulous, arbitrary and meaningless, yet inescapable — and female politicians seem to be particularly burdened with it even when they win and especially when they run for president.”

“The idea that we should like our politicians predates women’s suffrage, let alone women in politics. Pushed by Madison Avenue and preached by self-help gurus, likability is a standard that history shows us was created and sold by men. The bad news is that means it’s a tricky fit for women. The good news is that what was invented once can be reinvented.”

Washington Post: “Trump and his allies, seeking to amplify claims that the FBI spied on his 2016 campaign, are seizing on news reports and statements by Attorney General William Barr to launch a political rallying cry they view as an antidote to special counsel Robert Mueller’s findings.”

“Dismissed by critics as an outlandish conspiracy theory, so-called ‘spygate’ is fast becoming a central feature of the Trump campaign as it seeks to go on offense in the wake of a report that identified 10 instances of potential obstruction of justice by Trump. The campaign is publicly calling for criminal investigations into former FBI officials, making ‘spygate’ fundraising pitches and selling spy-themed merchandise. The goal, officials said, is to turn the Russia probe into a political winner that could help him secure another term.”

“California will send legislation to Gov. Gavin Newsom’s desk requiring presidential candidates to submit five years’ worth of tax returns in order to appear on the ballot, joining 18 other states in a jab at President Trump’s refusal to release his tax returns,” CNN reports.

Sen. Mike Enzi (R-WY) announced he would retire at the end of his term next year, the Casper Star Tribune reports. Said Enzi: “I have much to get done in the next year and a half. I want to focus on budget reform. I don’t want to be burdened by the distractions of another campaign. After this year, I’ll find other ways to serve.”

In a pair of tweets, President Trump said he will hike tariffs on $200 billion worth of imports to 25 percent from 10 percent, The Washington Post reports. “Trump had twice before postponed the scheduled increase to allow negotiators to seek a comprehensive deal. His threat increases pressure on a deal that Trump said has been going ‘too slowly.’”