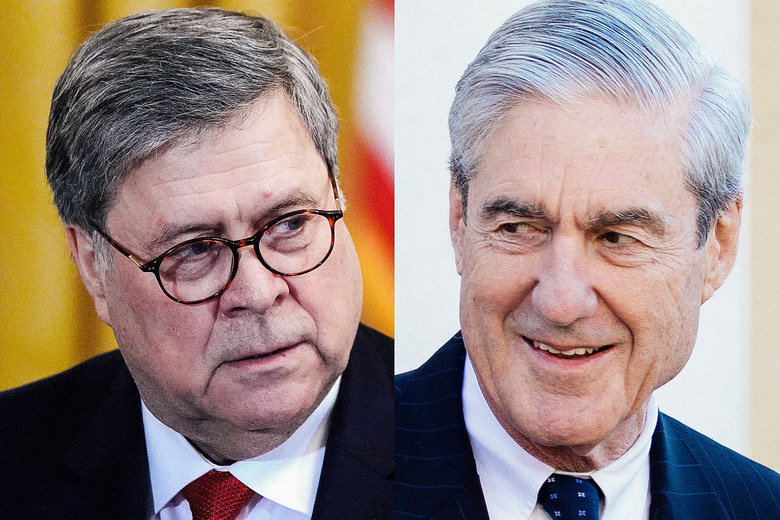 Special counsel Robert Mueller wrote a letter in late March complaining to Attorney General William Barr that a four-page memo to Congress describing the principal conclusions of the investigation into President Trump “did not fully capture the context, nature, and substance” of Mueller’s work, the Washington Post reports.

“Days after Barr’s announcement, Mueller wrote a previously unknown private letter to the Justice Department, which revealed a degree of dissatisfaction with the public discussion of Mueller’s work that shocked senior Justice Department officials.”

New York Times: “The letter adds to the growing evidence of a rift between them and is another sign of the anger among the special counsel’s investigators about Mr. Barr’s characterization of their findings, which allowed Mr. Trump to wrongly claim he had been vindicated.”

President Trump trashed his own White House infrastructure plan released last year, blaming former economic adviser Gary Cohn for drafting a proposal that was “so stupid,” The Hill reports. “Trump, meeting with Speaker Nancy Pelosi (D-CA) and Senate Minority Leader Charles Schumer (D-NY), made clear that he was never supportive of the proposal calling for public-private partnerships because ‘you get sued.’” Said Trump: “That was a Gary bill. That bill was so stupid.”

“At last month’s St. Patrick’s Day lunch in the Capitol, President Trump told Richard Neal, the powerful Democratic chairman of the House’s tax-writing Ways and Means Committee, that he wants to spend close to $2 trillion on infrastructure,” Axios reports. “A former senior White House official told me that on infrastructure, Trump’s instincts are much closer to Elizabeth Warren’s than they are to his tight-fisted acting chief of staff Mick Mulvaney.”

“Democratic congressional leaders said they held a constructive meeting with President Trump on Monday at which they agreed to seek a deal on a $2 trillion infrastructure bill,” The Hill reports.

Wall Street Journal: “In unusually positive comments about negotiations with the president, House Speaker Nancy Pelosi (D-CA) and Senate Minority Leader Chuck Schumer (D-NY) both praised the meeting as productive and said they had agreed to return in three weeks to hear Mr. Trump’s ideas about how to pay for an infrastructure bill.”

Said Schumer: “There was goodwill in this meeting and that was different than some of the other meetings that we’ve had.”

“Democrats in Congress can move ahead with their lawsuit against President Trump alleging that his private business violates the Constitution’s ban on gifts or payments from foreign governments, a federal judge ruled Tuesday,” the Washington Post reports.

“The decision in Washington from U.S. District Judge Emmet Sullivan adopted a broad definition of the anti-corruption ban and could set the stage for Democratic lawmakers to begin seeking information from the Trump Organization.”

Washington Post: “Allegations that workers were routinely shortchanged on their pay at President Trump’s suburban country club are now the subject of an inquiry by the New York attorney general, whose investigators have interviewed more than two dozen former employees.”

“The inquiry could raise awkward political questions for Trump, who has made stopping illegal immigration a centerpiece of his presidency and his reelection campaign but faces allegations that his business benefited from low-paid, undocumented workers.”

“Stephen Moore, President Trump’s pick to serve on the Federal Reserve Board, once dismissed the Violence Against Women Act as the ‘most objectionable pork’ in the 1994 crime bill, saying the money would better spent if Americans were forced to write checks to ‘radical feminist’ groups,” CNN reports.

“More recently, he’s wondered aloud whether women would concern themselves about gender parity once they start out-earning men and suggested that women shouldn’t curse in public.”

“It’s part of a 25-year track record of dismissing women and criticizing gender equality in print and in interviews with conservative outlets.”

“Education Secretary Betsy DeVos remains so disliked in certain circles that her very name is a punchline. She mostly lands in the news for the wrong reasons, such as being forced last month to defend budget cuts for the Special Olympics before angry lawmakers. President Trump has privately complained about her, insulting her intelligence on several occasions,” the Washington Post reports.

“Yet the president shows no signs of asking her to resign, reflecting in part his lack of interest in the issue of education and the department responsible for it. And DeVos has no interest in departing.”

Washington Post: “In two meetings in the White House in recent months, Trump said repeatedly that Russia’s efforts didn’t change a single vote, even though his advisers have never suggested that they did, and he continually insisted that the campaign was not ‘hacked.’”

President Trump is suing Deutsche Bank and Capital One in an effort to prevent them from providing financial records requested through congressional subpoenas, USA Today reports.

“The complaint is the latest in a series of disputes between the White House and Congress regarding Trump’s conduct. The president last week filed a federal lawsuit to block the Democratic-controlled House from obtaining financial records from his business’s longtime accountant.”

Former President Obama lent his voice to a new Joe Biden campaign video that touts his former vice president as being “resilient, loyal, and a patriot,” CBS News reports.

“The new ad features footage of the former president delivering a speech during Biden’s Presidential Medal of Freedom ceremony at the White House back in 2017. In it, he devotes his remarks to a glowing review of Biden’s storied political career.”

The video ends with Obama saying, “The best part is he’s nowhere close to finished.”

“The Trump administration is pushing to issue an order that would designate the Muslim Brotherhood a foreign terrorist organization, bringing the weight of American sanctions against a storied and influential Islamist political movement with millions of members across the Middle East,” the New York Times reports.

“President Trump ordered major changes to U.S. asylum policies in a White House memo released Monday night, including measures that would charge fees to those applying for humanitarian refuge in the United States,” the Washington Post reports.

“Trump’s directive also calls for tightening asylum rules by banning anyone who crosses the border illegally from obtaining a work permit, and giving courts a 180-day limit to adjudicate asylum claims that now routinely take years to process because of a ballooning case backlog.”

House Intelligence Committee Chairman Adam Schiff (D-CA) said that his panel would make a criminal referral to the Justice Department regarding potential false testimony by Erik Prince, the billionaire founder of the private military contractor Blackwater and an ally of President Trump, the Washington Post reports.

Said Schiff: “The evidence is so weighty that the Justice Department needs to consider this.”

“Legislation that would allow U.S. congressional committees to ask for President Trump’s state tax returns is a step closer to getting a vote in New York’s Democrat-controlled Senate,” the AP reports.

“The measure would authorize New York’s Tax Department to release state tax returns to a congressional committee if requested.”

“The Missouri legislature moved one step closer to putting on the ballot a measure that would gut an anti-gerrymandering initiative passed by voters last year,” TPM reports.

“The proposal, if it becomes law, would set the stage for the state to exclude non-citizens from its redistricting process, kicking off a major legal battle over who deserves political representation in the country.”