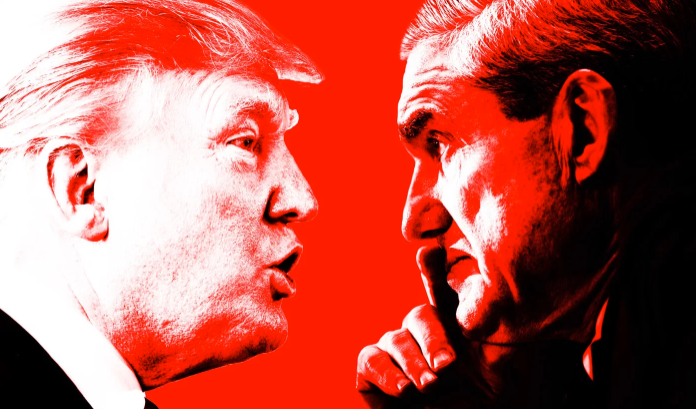 President Trump and the Trump Organization are “seeking a court order to prevent his accounting firm from complying with what his lawyers say is an illegitimate use of congressional subpoena power by congressional Democrats,” the Washington Post reports.

“Speaker Nancy Pelosi’s leadership team told lawmakers Monday that they had no plans to immediately open impeachment proceedings against President Trump and would focus instead on investigations,” the Washington Post reports.

“According to three officials on the call, leaders told rank-and-file lawmakers — who were scattered across the nation, back in their districts for a two-week congressional recess — that investigative committees would continue their inquiries and see where they lead.”

In that vein, the House Judiciary Committee has issued a subpoena for former White House counsel Don McGahn, Axios reports. “McGahn was a key cooperating witness in the Mueller investigation, shedding light on many of the episodes of potential obstruction by President Trump that Mueller highlighted in his report. The subpoena demands that McGahn testify at a hearing on May 21 and turn over dozens of documents related to Mueller’s investigation by May 7.”

“A crucial issue in the case is whether adding this question for the first time since 1950 will hurt the ability of the census to accurately count the American population. In particular, critics of the administration fear the question will dissuade some U.S. residents, especially immigrants, from answering the census.”

“Research suggests these fears are justified. Working separately, we have used surveys and experiments to show that the citizenship question would make people less likely to respond to the census and provide complete information if they do respond. This is particularly true for Latinos and immigrants.”

Former U.S. attorney Preet Bharara told CNN that President Trump could be prosecuted when he is out of office and that the Mueller report made it clear the Mueller team believes there is “future legal jeopardy.”

First Read: “The Mueller report makes a damning case about Trump’s dishonesty: One of the unmistakable takeaways after reading the Mueller report is how the president of the United States wasn’t honest with the American public when it came to Russia and the entire Russia probe.”

“Almost every step of the way – during the campaign, during the investigation itself – the president and his allies weren’t being honest with the American people.”

“And outside of the questions about obstruction of justice and conspiracy/coordination/collusion, isn’t this dishonesty one of the biggest storylines out this entire Russia episode?”

“The Supreme Court on Monday added what could be landmark issues to its docket for next term: whether federal anti-discrimination laws protect on the basis of sexual orientation and gender identity,” the Washington Post reports.

“The court accepted three cases for the term that begins October. They include a transgender funeral home director who won her case after being fired; a gay skydiving instructor who successfully challenged his dismissal; and a social worker who was unsuccessful in convincing a court that he was unlawfully terminated because of his sexual orientation.”

Max Boot: “Having declared the Republican Party to be morally bankruptlast month — after 90 percent of GOP lawmakers voted to approve President Trump’s unconstitutional state of emergency — I am not remotely surprised by the party’s dishonorable and dishonest reaction to special counsel Robert Mueller’s report.”

“But I am nevertheless dismayed and disgusted that a once-great party — to which I belonged for most of my life — could become a handmaiden to foreign attacks on the United States and blatant lawbreaking by the president.”

Garrett Graff: “One of the most surprising decisions at the close of the Mueller investigation was the lack of further indictments. But conspiracy theorist Jerome Corsi, at least, appears to still be very much in the sights of prosecutors. In fact, the very first mention of Corsi’s name appears in a redaction labeled ‘Harm to Ongoing Matter.’ (We know that because we only see the ‘second’ reference to Corsi’s name appear in a paragraph on page 54 of the first volume of the report.) Elsewhere, Corsi’s name is clearly hidden in other redactions, as context clues make clear he’s the ‘ongoing matter’ under question.”

Garrett Graff: “The role of Michael Flynn aide Peter Smith has long been unclear. Smith evidently tried to mount an effort in 2016 to find Hillary Clinton’s stolen emails through the dark web, and later apparently killed himself days after the Wall Street Journal reported on those efforts in 2017. Mueller makes clear that Smith’s actions were extensive, well-funded, and part of multiple initiatives by people connected to the Trump campaign to find Hillary’s emails—all of which were then overtaken by the Russian theft and email dumps of DNC and Clinton campaign emails.”

Garrett Graff: “As Mueller laid out in his 448-page report, Trump’s behavior during his campaign and first two years in office makes clear that Trump was not simply a ‘useful idiot,’ a clueless pawn manipulated to Russia’s ends. It’s worse than that.”

“Mueller paints a detailed, consistent, and compelling portrait, compiled and amassed through both comprehensive documentary evidence and sworn testimony, of a man so immoral that while campaigning to be commander-in-chief he ‘expected’ to benefit from an attack by America’s leading traditional adversary, even asking publicly for more help from Russia; a man who promised to ‘Make America Great Again’ but who was so unpatriotic that his campaign fielded numerous inquiries and offers of help from Russia without ever once contacting law enforcement or US intelligence; a man who swore to uphold the Constitution at his inauguration, but was so insecure that despite evidently not even doing anything wrong, his first instinct was to obstruct the justice process repeatedly; a man so narcissistic that he swore to defend the nation from all enemies foreign and domestic, yet his first instinct was not anger at the authoritarian who attacked our democratic process but instead to magnify that attack by lambasting and undermining the professional, career intelligence and law enforcement officials who protect our country; a man so greedy that he lied repeatedly and openly to the American people about how he hoped Vladimir Putin would deliver hundreds of millions of dollars to his personal family business; and a manager so clueless and disrespected that his own senior campaign staff were carrying not one, not two, but three separate, unrelated criminal conspiracies even as they have purported to work on his behalf.”

“The Mueller report outlines a portrait of a man completely unsuitable as the protector of the Constitution and arbiter of national security, a leader wholly unable to separate the good of our country from his own business interests, so lacking a moral compass that he would be unfit to lead a publicly traded company or possess a low-level government security clearance.”

In a closed-door meeting with Iranian-American community leaders last Monday, Secretary of State Mike Pompeo said the Trump administration is “not going to do a military exercise inside Iran” to expedite a regime change, Axios reports.

“Pompeo also sought to distance the Trump administration from a controversial Iranian resistance group that has welcomed John Bolton and Rudy Giuliani as speakers in a private capacity.”

Stephen Moore, who was nominated by President Trump to serve on the Federal Reserve Board, has written that women “should be banned from refereeing, announcing or beer vending at men’s college basketball games,” asking if there was any area in life “where men can take vacation from women,” CNN reports. In one column for the National Review, Moore complained about his wife voting for Democrats: “Women are sooo malleable! No wonder there’s a gender gap.” In another, he called it a “travesty” that “women now feel free to play with the men.”

President Trump announced that Herman Cain is withdrawing his name from consideration as a member of the Federal Reserve’s Board of Governors.

“The State Department is set to announce that all countries will have to completely end their imports of Iranian oil or be subject to U.S. sanctions,” the Washington Post reports.

“On Monday morning, Secretary of State Mike Pompeo will announce to the media that, as of May 2, the State Department will no longer grant sanctions waivers to any country that is currently importing Iranian crude or condensate.”