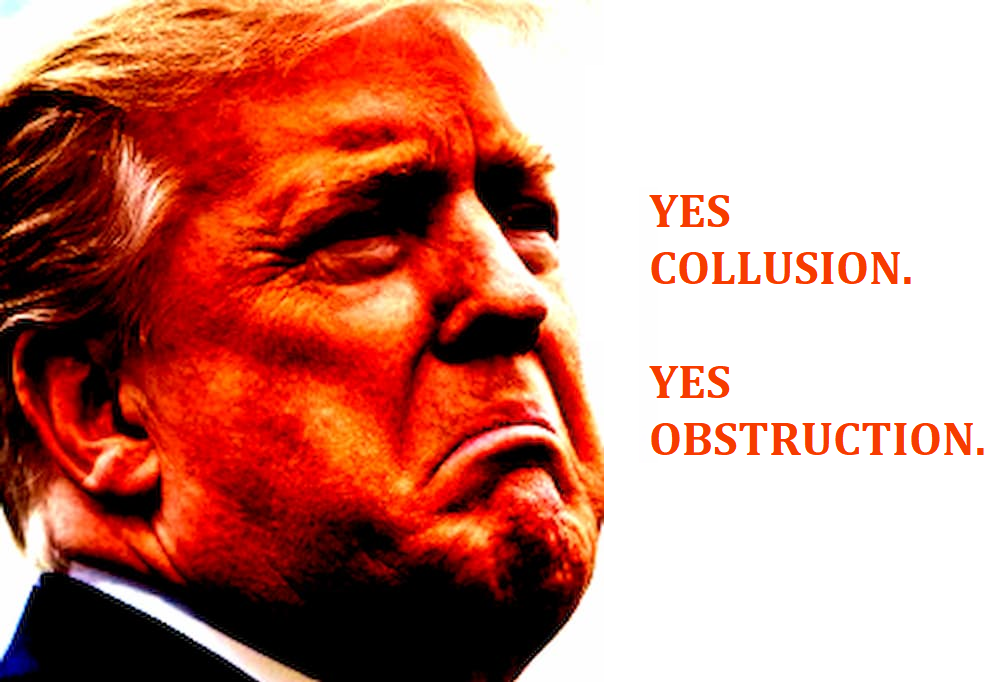 New York Times: “If the American public or members of Congress were learning these things for the first time, the political fallout would normally be devastating. The consequences of the report remain to be seen, but if people are not surprised or shocked by the revelations, then Mr. Trump may have benefited by the steady drip of news stories he has so loudly criticized.”

Dan Balz: “The principal focus of the special counsel’s investigation was on questions of criminality. But there is more than the issue of what rises to the level of criminal conspiracy or criminal obstruction when judging a president and his administration. These are questions that go to the heart of what is acceptable or normal or advisable in a democracy.”

“On that basis, the Mueller report provides a damning portrait of the president and those around him for actions taken during the 2016 campaign and while in office.”

The Mueller report clearly states that the special counsel’s team did not believe “collusion” — which President Trump has incessantly insisted he did not commit — to be a legal term. For that reason, prosecutors did not assess whether Trump’s campaign “colluded” with Russia, the Washington Post reports. But for Mueller and the notion of collusion, what he and his team instead examined was whether anyone associated with the Trump campaign “coordinated” with Russians, as defined by conspiracy law, which required “an agreement—tacit or express—between the Trump Campaign and the Russian government on election interference.” Mueller’s team noted that an agreement requires two parties taking actions “informed by or responsive to the other’s actions or interests.”

But there are 100+ pages of in the Mueller Report that prove that Trump and his campaign and his family had many many contacts with Russia and that they attempted to conspire with Russia, but those contacts and attempts never rose to the level of the criminal elements of conspiracy.

The Trump campaign may not have directly conspired with the Russian government, but they had the same political goals and interests as the Russians and clearly tried to profit politically from Russian interference.

The Trump campaign knew about Russian interference, sought Russian assistance, had contacts with Russian officials, and repeatedly lied about it. That may not be a criminal offense, but from a political perspective it’s pretty traitorous.

Mueller’s team clearly thinks that Trump obstructed justice and the only reason they didn’t say that is because of the DOJ prohibition on indicting a sitting president.

With respect to Obstruction, Mueller pretty explicitly says throughout Volume II of his report that Trump is guilty of at least 10 instances of criminal obstruction of justice, but he could not be indicted to to the DOJ policy of not indicting the President, and that the ball is now in Congress’ court.

“With respect to whether the President can be found to have obstructed justice by exercising his powers under Article II of the Constitution, we concluded that Congress has the authority to prohibit a President’s corrupt use of his authority in order to protect the integrity of the administration of justice.” — The Mueller Report, on why the special counsel did not make a determination on whether President Trump obstructed justice.

The Atlantic: “The redacted version of Special Counsel Robert Mueller’s report released on Thursday runs 448 pages. But its most important implication can be summarized in a single sentence: There is sufficient evidence that President Trump obstructed justice to merit impeachment hearings.”

“A basic principle lies at the heart of the American criminal-justice system: The accused is entitled to a fair defense and a chance to clear his name. Every American is entitled to this protection, from the humblest citizen all the way up to the chief executive. And that, Mueller explained in his report, is why criminal allegations against a sitting president should be considered by Congress and not the Justice Department. The Mueller report, in short, is an impeachment referral.”

The Mueller report clearly states that attempts by President Trump to obstruct the investigation failed because others refused to “carry out orders or accede to his requests.”

From the report: “Comey did not end the investigation of Flynn, which ultimately resulted in Flynn’s prosecution and conviction for lying to the FBI. McGahn did not tell the Acting Attorney General that the special counsel must be removed, but was instead prepared to resign over the President’s order. Lewandowski and Dearborn did not deliver the President ‘s message to Sessions that he should confine the Russia investigation to future election meddling only. And McGahn refused to recede from his recollections about events surrounding the President’s direction to have the special counsel removed, despite the President’s multiple demands that he do so.”

“Consistent with that pattern, the evidence we obtained would not support potential obstruction charges against the President’s aides and associates beyond those already filed.”

The Mueller report says that President Trump directed Gen. Michael Flynn to embark on an effort to find Hillary Clinton’s deleted emails in the summer of 2016, enlisting the help of a Senate staffer and a longtime GOP donor, the Wall Street Journal reports. Trump “asked individuals affiliated with his campaign to find the deleted Clinton emails,” according the special counsel report. Mr. Flynn “recalled that Trump made this request repeatedly, and Flynn subsequently contacted multiple people in an effort to obtain the emails.”

The Mueller report cites notes from a Justice Department aide stating when former Attorney General Jeff Sessions told President Trump that a special counsel had been appointed, Trump “slumped back in his chair and said, ‘Oh my God. This is terrible. This is the end of my presidency. I’m fucked.’”

“Special counsel Robert Mueller’s team referred 14 investigations to other US attorney’s offices, including the prosecution of Trump’s former attorney Michael Cohen and Greg Craig, the Skadden Arps attorney who was indicted for lying to DOJ about work he had done for the Ukraine Ministry of Justice,” CNN reports. “The other 12 investigations are redacted.”

The special counsel team wrote in the newly released report that President Trump stated more than 30 times he “does not ‘recall’ or ‘remember’ or have an ‘independent recollection’ “ of information investigators asked about, the Washington Post reports. But they wrote that they chose not to pursue a subpoena because of the “substantial delay” that such a step would cause. They also decided they have “sufficient evidence to understand relevant events and to make certain assessments without the President’s testimony.”

White House press secretary Sarah Sanders admitted to special counsel Robert Mueller that she made statements to the media that were not based in fact, CNN reports. Specifically, Sanders said her assertion in response to a question about FBI agents supporting Comey wasn’t “founded on anything.” She claimed that her comment was a “slip of the tongue” made “in the heat of the moment.” Or, a lie.

The Mueller report says that Senate Intelligence Chairman Richard Burr (R-NC) “appeared to brief the White House counsel’s office about the targets of the FBI’s Russia investigation in March 2017,” CNN reports. The report states that FBI Director James Comey briefed the Gang of Eight — the Intelligence Committee and congressional leaders — about the investigation on March 9, 2017. The week after, the White House counsel’s office was briefed by Burr on the “existence of 4-5 targets.”

“For nearly two years, President Trump’s lawyers and defenders have argued that it was impossible for him to illegally obstruct the Russia investigation, no matter his intentions, because he has full authority over federal law enforcement as head of the executive branch. But in his highly anticipated report, Robert Mueller rejected that sweeping view of executive power,” the New York Times reports.

“Still, Mr. Mueller concluded that it would be inappropriate for now for prosecutors to make a decision — one way or the other — because analyzing the evidence ‘could potentially result in a judgment that the president committed crimes.’ He reasoned that the Justice Department has for a half-century interpreted the Constitution as barring the indictment of a sitting president, so Mr. Trump could not get a trial and a chance to clear his name while he is running the country.”

“The special counsel’s rationale left the door open to the possibility that after Mr. Trump leaves office, prosecutors could re-examine the evidence Mr. Mueller gathered and charge the president. Attorney General William Barr tried to slam that door shut last month when he announced that in his view, the evidence did not support charging Mr. Trump regardless of any constitutional issues about charging sitting presidents.”

The Mueller report notes that Attorney General Jeff Sessions “offered his resignation letter after Mr. Trump lashed out at him following Mr. Mueller’s appointment, and the president ultimately rejected it. But the public attacks on Mr. Sessions did not stop,” the Wall Street Journalreports.

“The report says the they apparently became so taxing on the attorney general that he prepared another resignation letter and for the rest of the year carried it with him in his pocket every time he went to the White House.”

Asha Rangappa: “It’s clear that Attorney General Barr obscured and mischaracterized the bases upon which Mueller declined to reach a prosecutorial decision on whether President Trump committed the crime of obstruction.”

“He did so based on two unsettled legal questions: First, current DOJ policy not to charge sitting presidents, and second, Trumps’ lawyers’ asserted defense that a president cannot legally obstruct justice (which happens to exactly mirror Barr’s own legal theory, which he sent in an unsolicited memo to DOJ one year ago). Since either of these theories might preclude the president from rebutting the evidence in an adversarial process, Mueller believed a fairness principle constrained him from accusing the president in the form of recommended charges.”

“Notably, the report extensively challenges the legal basis of the DOJ policy as well as Trump’s (i.e., Barr’s) Article II defense. It also makes an affirmative case for Congress’ authority to investigate obstruction of justice by the president and observes that the president could be exposed to criminal liability once he leaves office, thereby justifying a full investigation and gathering of evidence. In doing so, Mueller makes clear that his findings were intended for independent evaluation by Congress, or by future prosecutors — not by Barr himself.”

Garrett Graff: “The report’s release also made clear just how much more investigation there may be still to unfold, even as Mueller himself prepares to wrap up work in the days ahead and return to private life. Mueller has evidently referred at least 14 ongoing investigations onto other prosecutors, including 12 that are redacted in the report to prevent harm to ongoing cases. The other two, which focus on Michael Cohen and former Obama White House counsel Greg Craig, have been publicly known for some time.”

“Beyond those, House Judiciary Committee chairman Jerry Nadler has already requested that Robert Mueller testify before Congress no later than May 23. Nadler has also said that he plans to issue a subpoena for the full, unredacted report, as well as any underlying materials. Which is to say: This is far from over. The long-awaited ‘Mueller time’ may have come Thursday, but the investigation’s impact will reverberate for some time to come.”

Michael Cohen pledged on Twitter that he will speak about possible redactions in special counsel Robert Mueller’s report. Said Cohen: “Soon I will be ready to address the American people again. Tell it all…and tell it myself!”