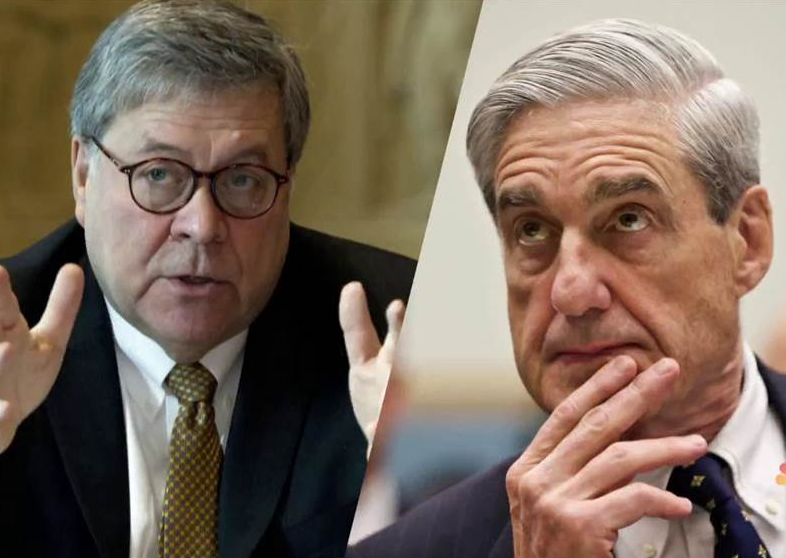 “The Justice Department expects to release on Thursday a redacted version of special counsel Robert Mueller’s report on President Trump, his associates and Russia’s interference in the 2016 election, setting the stage for further battles in Congress over the politically explosive inquiry,” the Washington Post reports.

Politico: “The 400-page Mueller report, expected to land this week, is the most anticipated political read since Ken Starr, Monica Lewinsky and the stained blue dress—and potentially even juicier. But how do you wring that juice out of a behemoth of a legal document, full of redactions, at the speed of social media?”

Playbook: “No one knows exactly what potential bombshells the report could entail for President Trump, but the general consensus is this could be a pretty bad week for the administration that has leaned in aggressively on the ‘no collusion’ part of Barr’s summary.”

Jonathan Swan: “Much of Washington has spent the weekend on pins and needles preparing for this week’s release of the Mueller report. But in one particular quarter, people seem quite relaxed.”

“Two of the president’s top advisers who will be handling the response to Mueller’s report were watching the Masters when I called them about it this weekend. By all accounts, the president himself is also taking a fairly blasé approach. The subject has barely come up, if at all, in recent senior staff meetings, according to two sources with direct knowledge. And in recent calls to aides and allies, Trump has barely mentioned it.”

Rudy Giuliani told the Wall Street Journal that Trump’s outside lawyers have prepared a counter-report that is currently 140 pages but they’re trying to whittle it down to 50 pages. Giuliani added that they expect to focus their defense mostly on the topic of obstruction of justice and will largely ignore collusion.

New York Times: “During the 2016 campaign, he would not rule out creating a registry of Muslims in the United States. He claimed to have seen “thousands” of Muslims cheering on rooftops in New Jersey after Sept. 11, a statement that was widely debunked. After deadly attacks in Paris and California, Mr. Trump called for a moratorium on Muslims traveling to the United States.”

“Now, with 19 months until the 2020 election, Mr. Trump is seeking to rally his base by sounding that theme once again. And this time, he has a specific target: Representative Ilhan Omar, Democrat of Minnesota and one of the first Muslim women elected to Congress.”

“Mr. Trump and his team are trying to make Ms. Omar, one of a group of progressive women Democratic House members who is relatively unknown in national politics, a household name, to be seen as the most prominent voice of the Democratic Party, regardless of her actual position. And they are gambling that there will be limited downside in doing so.”

Said Pelosi: “Following the President’s tweet, I spoke with the Sergeant-at-Arms to ensure that Capitol Police are conducting a security assessment to safeguard Congresswoman Omar, her family and her staff. They will continue to monitor and address the threats she faces. The President’s words weigh a ton, and his hateful and inflammatory rhetoric creates real danger.”

President Trump floated an idea for Boeing: “What do I know about branding, maybe nothing (but I did become President!), but if I were Boeing, I would FIX the Boeing 737 MAX, add some additional great features, & REBRAND the plane with a new name. No product has suffered like this one. But again, what the hell do I know?”

“President Trump’s attorneys are warning of potential legal action if an accounting firm turns over a decade of the president’s financial records to the House Oversight and Reform Committee,” Politico reports.

“Last month, the committee formally requested that Mazars turn over 10 years of Trump’s financial records, related specifically to the Trump Organization, the president’s revocable trust and other subsidiaries.”

Just Security: “On Friday the thirteenth October 1989, by happenstance the same day as the ‘Black Friday’ market crash, news leaked of a legal memo authored by William Barr. He was then serving as head of the Justice Department’s Office of Legal Counsel (OLC). It is highly uncommon for any OLC memo to make headlines. This one did because it was issued in ‘unusual secrecy’ and concluded that the FBI could forcibly abduct people in other countries without the consent of the foreign state. The headline also noted the implication of the legal opinion at that moment in time. It appeared to pave the way for abducting Panama’s leader, Gen. Manuel Noriega.”

“When Barr withheld the full OLC opinion in 1989 and said to trust his summary of the principal conclusions, Yale law school professor Harold Koh wrote that Barr’s position was ‘particularly egregious.’ Congress also had no appetite for Barr’s stance, and eventually issued a subpoena to successfully wrench the full OLC opinion out of the Department.”

“When the OLC opinion was finally made public long after Barr left office, it was clear that Barr’s summary had failed to fully disclose the opinion’s principal conclusions.”

“House Democrats are sharpening their focus on White House immigration adviser Stephen Miller, with key lawmakers saying he should be brought before congressional committees to testify about his role in recent policy controversies,” the Washington Post reports.

Alexi McCammond: “Ohio voters who have flipped between parties in past presidential elections and supported Donald Trump in 2016 now say their first choice in 2020 is… Barack Obama.”

“This is the biggest takeaway from an Engagious/Focus Pointe Global focus group I watched last week. The group included 12 swing voters, half of whom voted for Mitt Romney in 2012 and then flipped to Hillary Clinton in 2016, and half of whom went for Obama in 2012 and Trump in 2016.”

“Five of the six Obama/Trump voters would pick Obama if he could run again in 2020. Among the reasons: Obama is ‘more of a diplomatic person,’ as one participant put it; another said he’s ‘more intellectual.’”

Politico: “As Americans rush Monday to finish up their own taxes, their judgment on Trump’s beloved tax cut bill is pretty clear: Most really don’t like it.”

“Multiple polls show a majority of Americans don’t think they got a tax cut at all — even though independent analyses show they did. And only around a third of the country approves of the legislation itself, the Tax Cuts and Jobs Act, passed by Congress at the end of 2017.”

“President Trump and his top aides are weighing rules designed to clamp down on countries whose nationals overstay short-term visitor visas as part of a broader push for new ways to curb immigration,” the Wall Street Journal reports.

“The effort would target nationals of countries with high overstay rates of such visas, which include the African nations of Nigeria, Chad, Eritrea, Liberia and Sierra Leone, according to Department of Homeland Security data. The U.S. as part of a new rule would tell the countries’ governments that if rates don’t reverse, then future visas could be shorter or harder to get.

“Pete Buttigieg’s meteoric rise as a presidential candidate is putting a spotlight on his years as mayor of South Bend, Ind., including his demotion of an African American police chief,” The Hill reports.

“An Indiana judge will rule soon on whether to release five cassette tapes of secretly recorded conversations between South Bend police officers that led to the 2012 demotion of Police Chief Darryl Boykins, the city’s first ever black police chief.”

“The South Bend City Council subpoenaed Buttigieg to win release of the tapes, which were at the center of a police department shake-up and a series of lawsuits.”

“Republicans on Capitol Hill are raising alarms at the White House’s resistance to congressional demands, fearing President Donald Trump is bolstering the power of his office at the expense of Congress,” CNNreports.

“The White House has stonewalled House Democrats on nearly all aspects of their sprawling investigations into the President, refusing to provide documents as requested by committee chairmen, preventing former White House officials from complying with Democratic demands and fighting subpoenas pertaining to the US Census and the administration’s handling of the security clearance process.”

“President Trump raised more than $30 million for his re-election in the first three months of 2019 and now sits atop more than $40 million,” the New York Times reports.

“Mr. Trump’s campaign — which has set an ambitious $1 billion goal for the 2020 race — launched an aggressive fund-raising push earlier than his predecessors. The campaign has already installed a headquarters in Northern Virginia and is combining a push for both big donations and small contributions online.”