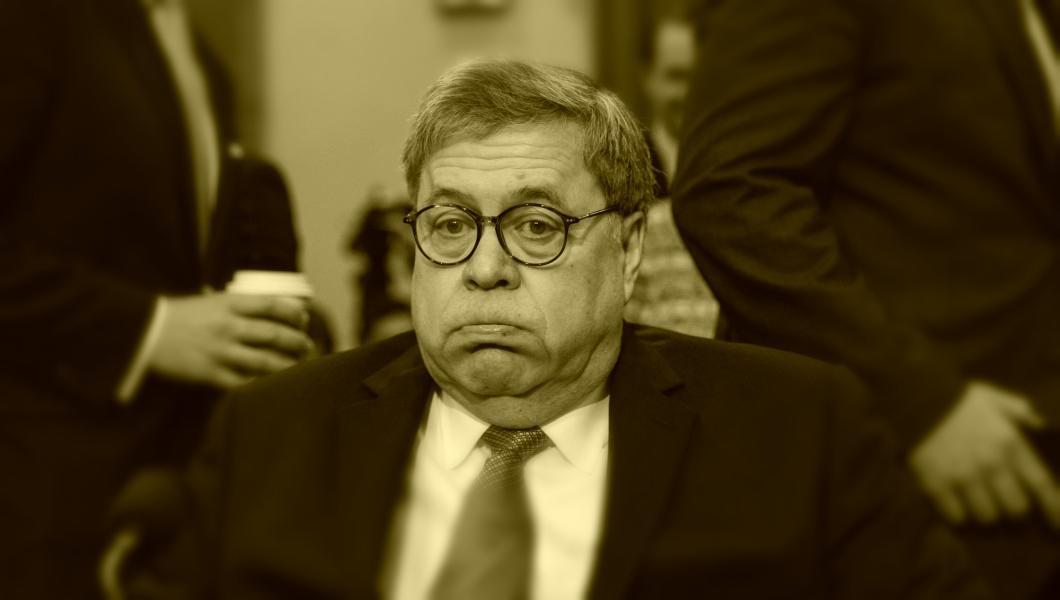 “Attorney General William Barr has assembled a team to review controversial counterintelligence decisions made by Justice Department and FBI officials, including actions taken during the probe of the Trump campaign in the summer of 2016,” Bloomberg reports. “This indicates that Barr is looking into allegations that Republican lawmakers have been pursuing for more than a year — that the investigation into President Donald Trump and possible collusion with Russia was tainted at the start by anti-Trump bias in the FBI and Justice Department.”

Barr told a Senate Appropriations subcommittee that he believes spying by law enforcement officials on the 2016 Trump campaign “did occur,” and that he plans on reviewing “both the genesis and conduct” of the Russia investigation, Axios reports. Said Barr: “I think spying did occur. Yes, I think spying did occur. But the question is whether it was predicated, adequately predicated. And I’m not suggesting that it wasn’t adequately predicated. But I need to explore that.”

However, when pressed if he has any evidence of wrongdoing, Barr said: “I have no specific evidence that I would cite right now. I do have questions about it.”

James Baker, the former top lawyer of the FBI, said senior bureau officials discussed the possibility in May 2017 that President Donald Trump had fired James Comey “at the behest of” the Russian government, Politicoreports.

Playbook: “If you are a Democrat, and you’re watching President Trump fumble around with immigration policy, there is only one thing to do that makes sense: nothing. The president and his allies are providing Democrats plenty of fodder as they enter day four of massive upheaval at the Department of Homeland Security with seemingly no plan to deal with asylum-seekers on the U.S.-Mexico border. While some might want Speaker Nancy Pelosi and Senate Minority Leader Chuck Schumer to take advantage of the chaos, in reality, sitting on their hands is the only sound political strategy at the moment. As for the 2020 candidates, what’s the upside of weighing in?”

“There’s a political truism that seems to fit quite well here: Never get in the way of your opponent when he’s making a mistake.”

“Benjamin Netanyahu appeared to be headed toward a historic fifth term as Israel’s prime minister on Wednesday, with close-to-complete unofficial election results giving his right-wing Likud and other nationalist and religious parties a solid majority in parliament,” the AP reports.

“The outcome affirmed Israel’s continued tilt to the right and further dimmed hopes of a negotiated solution to the Israeli-Palestinian conflict. Re-election will also give Netanyahu an important boost as he braces for the likelihood of criminal charges in a series of corruption scandals.”

“With 97.4% of the vote counted, Likud and its traditional political allies were in command of a 65-55 majority in parliament.”

Haaretz: “The new Netanyahu government will have two main goals: to get rid of the indictments looming in his future and to annex the settlements to Israel, in coordination with the Trump administration. These two goals could be summed up as ‘immunity in exchange for sovereignty.’”

Washington Post: “If Netanyahu succeeds in forming the next government, he is expected to annex parts of the West Bank as part of a possible deal with coalition partners to get the law changed in a way that would give him immunity from prosecution on corruption and bribery charges.”

Haaretz: “An Israeli public relations company headed by a settler leader boasted Wednesday that it was behind the Likud initiative to place 1,200 hidden cameras in Arab polling stations on Election Day. The firm added that it was to thank for the historically low turnout among Arab voters.”

From the company’s statement: “Thanks to us placing observers in every polling station we managed to lower the voter turnout to under 50 percent, the lowest in recent years!”

With the West Bank soon to be annexed, Israel will now become an apartheid state that will have to be sanctioned as such by the next Democratic Administration, coupled with the ending of all economic and military aid and arm sales. Indeed, even diplomatic relations may need to be severed, as they were with South Africa.

Washington Post: “The two political survivors from Trump’s 2016 campaign have emerged as all but untouchable because of their close relationship — and, in Kushner’s case, familial ties — with the president. But if Miller represents Trump’s id — reaffirming his hard-line immigration impulses — Kushner attempts to channel the president’s desire to be seen as a consummate dealmaker.”

“The differences put the two advisers on a potential collision course — adding to the swirl of confusion over how Trump intends to cope with a surge of migrants at the border, according to interviews with 21 White House aides, administration officials, lawmakers, Republican operatives and Trump confidants, many of whom requested anonymity to reveal private discussions.”

“So far, though, White House officials say the two have maintained a friendly working relationship, focused on divergent but complementary imperatives.”

When President Trump paid a visit to Mount Vernon in April 2018 with French President Emmanuel Macron, Politico reports Trump questioned why George Washington didn’t name the place after himself: “If he was smart, he would’ve put his name on it. You’ve got to put your name on stuff or no one remembers you.”

When his guide pointed out that Washington actually did pretty well considering the nation’s capital was named after him, Trump laughed and said, “good point.”

During Tuesday afternoon’s Senate Republican lunch, Majority Leader Mitch McConnell (R-KY) advised senators concerned about Trump’s selection of Herman Cain and Stephen Moore for seats on the Federal Reserve Board to share their views with the White House now, before Trump officially moves forward with the nominations, CNN reports.

“The Manhattan U.S. attorney’s office has gathered more evidence than previously known in its criminal investigation of hush payments to two women who alleged affairs with Donald Trump, including from members of the president’s inner circle,” the Wall Street Journal reports.

“They also spoke to Keith Schiller, Mr. Trump’s former security chief. Investigators learned of calls between Mr. Schiller and David Pecker, chief executive of the National Enquirer’s publisher, which has admitted it paid $150,000 to a former Playboy model on Mr. Trump’s behalf to keep her story under wraps.”

Politico: “The club, an informal gathering that provides solidarity and networking opportunities in a hostile Washington, is open to what it calls ‘the Team’ — Trump administration appointees as well as alumni of the campaign, transition and inaugural committee. Members wear a lapel pin fashioned after the butt end of a .45 caliber bullet casing and attend semi-regular gatherings that often feature remarks by better-known Trump-world figures such as Brad Parscale, Corey Lewandowski and Anthony Scaramucci.”

“Its operations, described here for the first time, offer insight into how the anonymous foot soldiers of Trump’s Washington have organized their social lives: discreetly, with an eye toward exclusivity and the aspirational lifestyle that has always marked the Trump brand.”

Associated Press: “Emboldened by the new conservative majority on the Supreme Court, anti-abortion lawmakers and activists in numerous states are pushing near-total bans on the procedure in a deliberate frontal attack on Roe v. Wade.”

“Mississippi and Kentucky have passed laws that would ban most abortions after a fetal heartbeat is detected — which means as early as six weeks, when many women don’t even know they’re pregnant. Georgia could join them if Republican Gov. Brian Kemp signs a measure that has been sent to him, and similar bills are pending in at least eight other states with anti-abortion GOP majorities in their legislatures.”

Sarah Kliff: “Top White House officials are making big promises about President Trump’s announcement that the GOP ‘will soon be known as the party of health care.’ But the detailed plan that Trump laid out in his budget a few weeks ago doesn’t deliver on them.”

“When the Congressional Budget Office looked at the proposed policy, it estimated the plan would cause millions to lose coverage.”

“The plan would also give states the option to let insurers to return to discriminating against patients with preexisting conditions and allow states to give insurers flexibility in choosing what gets covered (and not covered), like maternity care.”

“In a letter, Mnuchin said Treasury would consult with the Justice Department to review the request. The letter also noted several GOP criticisms of Democrats’ request, including accusations that the push for Trump’s tax returns was politically motivated.”

CNN: “As most of the President’s advisers sought to dissuade him from the idea, warning the economic consequences would be devastating, Miller encouraged the President to move forward with shutting down some ports of entry.”

“While Trump was ultimately convinced to back down, Miller’s stance solidified his position in Trump’s mind as the chief facilitator of the President’s hardline instincts and appears to have won him more power.”

“In the wake of that debate, Trump has moved to more formally empower Miller, telling aides in a recent Oval Office meeting that he was putting Miller in charge of all immigration and border issues, according to a person familiar with the meeting.”

The European Union has agreed to a Brexit extension until October 31 with a review of British cooperation to determine whether there should be an earlier exit on June 30, the date British Prime Minister Theresa May originally asked for.

Washington Post: “E.U. leaders are tired of emergency Brexit summits and skeptical of what she can accomplish in less than three months.”

The Guardian: “The June ‘break clause’ has been put in to appease France, as the president, Emmanuel Macron, wanted assurances that the UK would conduct European elections properly.”