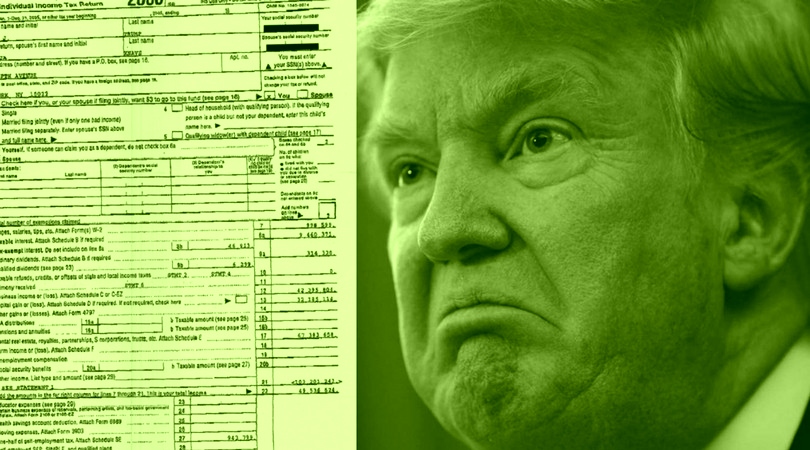 President Trump continues to hold his ground against Democratic efforts to obtain his tax returns, with one administration official telling CNN that the President and his team are willing to fight the House Democratic request all the way to the Supreme Court. Said one official: “This is a hill and people would be willing to die on it.”

Good. I look forward to the Trumpists dying on that hill. The law these tax returns were requested under is constitutional and clear. Indeed, Trump and his Administration do not have any standing or grounds to fight it.

President Trump said he is looking for someone “tougher” to lead the country’s top immigration enforcement agency, the Washington Postreports.

“The move blindsided lawmakers, Department of Homeland Security officials and others across the administration who said Friday they could not fathom why the president would pull his ICE nominee at a moment when U.S. government officials are saying the nation’s immigration enforcement system is at a ‘breaking point.’”

President Trump said he will skip this year’s White House Correspondents’ Association dinner and hold a rally instead, The Hill reports.

— Joe Biden, quoted by The Hill.

Andrew Sullivan: “Trump would be the oldest president in history at 74; Buttigieg would be the youngest at 39. Trump landed in politics via his money and celebrity after years in the limelight; Buttigieg is the mayor of a midsize midwestern town, unknown until a few weeks ago. Trump is a pathological, malevolent narcissist from New York, breaking all sorts of norms. Buttigieg is a modest, reasonable pragmatist, and a near parody of normality. Trump thrives on a retro heterosexual persona; Buttigieg appears to be a rather conservative, married homosexual. Trump is a coward and draft dodger; Buttigieg served his country. Trump does not read; Buttigieg does. Trump’s genius is demonic demagoguery. Buttigieg’s gig is careful reasoning. Trump is a pagan; Buttigieg is a Christian. Trump vandalizes government; Buttigieg nurtures it.”

“To put it simply, Mayor Pete seems almost designed to expose everything that makes the country tired of Trump.”

Said Scaramucci: “He does it because he thinks it’s fun and he also does it because he likes the fact that you guys are talking about it There’s a very large group of people inside of our population that when he does it and the media talks about it, they laugh.”

Sen. Elizabeth Warren (D-MA) “is set to call Friday for eliminating the filibuster, publicly endorsing for the first time a drastic change to Senate rules that would allow Democrats to pass sweeping, progressive bills with only a simple majority if they controlled the Senate in the future,” CNNreports.

This is my litmus test. No serious candidate who seeks to implement progressive change in 2021 cannot possibly say we need to keep the filibuster. They must support its elimination and an anti-democratic remnant of an irrelevant past.

Daily Beast: “Since at least mid-2017, Trump has been talking about the post-presidential memoir he will write; or, more likely, have ghostwritten on his behalf. He is planning on it being explosive and assumes (not without reason) that it will be a New York Times bestseller. And since the early days of his administration, he has conveyed his eagerness to get started on the project.”

“Another source, who is a friend of Trump’s, said the president has casually discussed how such a book could be used to dish dirt and settle scores with his foes in the media, the Democratic Party, non-loyal Republicans, law enforcement, and even individuals in his own administration. Trump, according to this person, noted that this memoir could help ‘correct’ the ‘fake news’ already published in popular books and newspapers, and give him the opportunity to spin a juicy yarn on his time at the heights of power.”

“The source recalled there was at least one time when he heard the president say, ‘that’ll go great in a book,’ referring to something that had just happened in a social setting. The implication left was that Trump was passively taking note of potential fodder.”

“Michael Cohen is offering Democrats new information in a bid to stay out of jail while he cooperates with Congress,” CNN reports. Cohen’s attorneys told lawmakers in a letter “that Cohen has discovered substantial files on a hard drive that might be helpful to investigators.”

“Cohen is asking for additional time — and congressional help — to persuade the Southern District of New York to allow him to postpone reporting to jail in order to review the files.”

Michael Cohen said he was “congratulated” by one of President Trump’s lawyers after giving false testimony to Congress about Trump’s Russia ties during the 2016 campaign, BuzzFeed News reports. The claim was made in a 12-page memo sent by Cohen’s lawyers to House Democrats in a bid to delay the start of Cohen’s prison term.

“It was just last week that President Trump and his allies euphorically celebrated what they called Trump’s exoneration after special counsel Robert Mueller’s Russia probe. The apparent absence of proof that Trump’s 2016 campaign conspired with the Kremlin produced talk of a fresh start for Trump’s presidency ahead of the 2020 election,” Politicoreports.

“But misfortune and mayhem almost immediately began piling up.Trump unleashed two new political crises — one on health care, one on the Mexican border — and then retreated on both of them. A brief lull in House Democratic oversight action ended abruptly when House investigators demanded his tax returns.”

“And news reports revealed that Mueller’s soon-to-be-released findings may be far more damaging than Attorney General William Barr has publicly indicated, suggesting that the Russia scandal is hardly in the president’s rear view window.”

Speaker Nancy Pelosi “questioned whether a health-care proposal embraced by several Democratic presidential candidates would be too expensive and fail to provide the same coverage as the Affordable Care Act. Instead, Pelosi  suggested Thursday that she would rather build on the 2010 law and is yet to be convinced the Medicare-for-all proposal pushed by many liberals would achieve its purported goals,” the Washington Post reports.

The Economist: “It made for an awkward first-date conversation. Pete Buttigieg, the mayor of South Bend in Indiana, recalls that he and Chasten Glezman talked about how he would be seeking higher political office. How would his boyfriend-to-be—now husband—feel about the public scrutiny? And how might voters respond to a same-sex couple on the campaign trail?”

“Mr Buttigieg had an inkling voters would mostly shrug. He had been nervous about coming out as the incumbent mayor in 2015, but he went on to win re-election that year with 80% of the vote. In South Bend even conservatives and Catholics cared more about his efforts to revive a once-struggling industrial city or his spell soldiering in Afghanistan. Almost the only time his sexual orientation now gets mentioned, he says, is when somebody wants to tell him they are at ease with it. Attitudes to once controversial issues can flip from bold to normal with baffling speed, he says.”