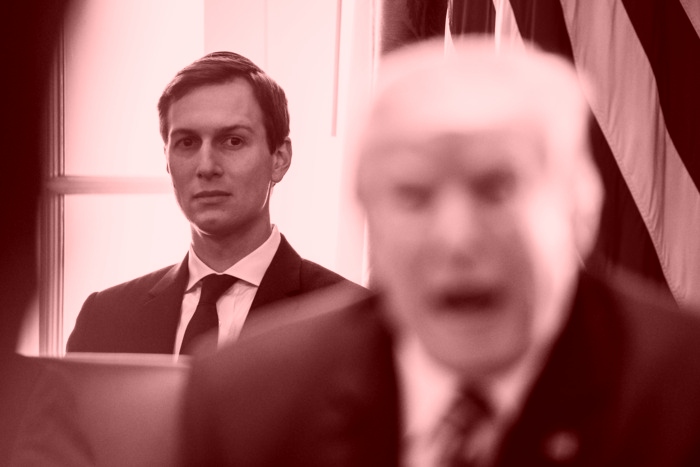 “A White House whistleblower told lawmakers that more than two-dozen denials for security clearances have been overturned during the Trump administration, calling Congress her ‘last hope’ for addressing what she considers improper conduct that has left the nation’s secrets exposed,” the Washington Post reports.

“Tricia Newbold, a longtime White House security adviser, told the House Oversight and Reform Committee that she and her colleagues issued ‘dozens’ of denials for security clearance applications that were later approved despite their concerns about blackmail, foreign influence, or other red flags.”

Said Newbold: “I feel that right now this is my last hope to really bring the integrity back into our office.”

Jonathan Chait: “Trump’s innovation of winning the election through adolescent-style bullying has carried over to his presidency. Presidents traditionally inculcate the virtues of decency, gentleness and generosity as part of their role as ceremonial head of state. One little-noticed feature of Trump’s presidency is how little time and attention he devotes to what used to be the banal presidential work of celebrating charitable good works and public service. Speeches and photo ops with volunteers, do-gooder business leaders, hospital visits and the like, once the barely-noticed daily bread of presidential messagings, has all but disappeared…”

“The message of any bully is that he is a winner — as are, to a pointedly lesser degree, his flunkies — and his targets are the losers. What is so remarkable about Trump is that he has no interest or need to conceal his cruelty. Trump is a highly familiar social type: the leader of a gang, taunting his targets while his flunkies guffaw. Before he came along, it was never possible to imagine such a person occupying the Presidency of the United States.”

“Mr. Biden also issued a sweeping statement acknowledging that he had shown ‘expressions of affection’ to people during his years on the campaign trail, but said, ‘not once — never — did I believe I acted inappropriately.’ It was the second damage-control statement to come from his team since Ms. Flores made her allegation on Friday, and it was released minutes before she appeared on CNN and argued that Mr. Biden’s behavior with her at a 2014 campaign event was ‘disqualifying’ for a presidential candidate.”

“Yet even as Mr. Biden defended himself, and his former staff members praised his conduct as a boss, some of the former vice president’s would-be rivals in the 2020 Democratic field and some allies said that Ms. Flores’s claim should be taken seriously.”

Jonathan Swan: “A major misconception on Capitol Hill right now is the notion that Mick Mulvaney is behind President Trump’s decision to back a lawsuit to demolish the Affordable Care Act.”

“After a week of talking to sources who’ve discussed the matter privately with Trump, it’s clear that this health care push is coming from the president himself. These people say Trump thinks it’s a great idea to try to brand the GOP as ‘the party of health care’ by backing the controversial litigation and pushing for legislative change.”

“Trump has privately said he thinks the lawsuit to strike down the Affordable Care Act will probably fail in the courts.”

“Trump used that exact line with a number of people, including in a private conversation with an adviser two days before announcing Brett Kavanaugh’s nomination.”

Washington Post: “It was only 200 days ago, on his 601st day in office, that President Trump exceeded 5,000 false or misleading claims.”

“Now, on his 801st day, the count stands at 9,451, according to The Fact Checker’s database that analyzes, categorizes and tracks every suspect statement the president utters. That’s a pace of 22 fishy claims a day over the past 200 days, a steep climb from the average of nearly 5.9 false or misleading claims a day in Trump’s first year in office.”

“The House Judiciary Committee plans to vote Wednesday to authorize subpoenas to obtain the full report of special counsel Robert Mueller, escalating a feud with the Justice Department over a lengthy document detailing findings about Russian interference in the 2016 presidential election,” the Washington Post reports.

“Rep. Jerrold Nadler (D-NY), the chairman of the House Judiciary Committee, on Monday announced plans for the panel’s vote, which would take place a day after a deadline the committee set for Attorney General William Barr to share the report.”

Sen. Brian Schatz (D-HI) “is set on Tuesday to unveil a constitutional amendment to abolish the Electoral College and allow for the election of presidents by popular vote,” the Daily Beast reports.

“The amendment is supported by other Democrats in the chamber, an aide said, including Sen. Kirsten Gillibrand (D-NY) and senior members of the Senate Judiciary Committee: Dick Durbin (D-IL) and Dianne Feinstein (D-CA).”

Rep. Ben Ray Luján (D-NM) “announced today he is running for Senate in New Mexico, halting his rise through House leadership for a shot at a seat in the upper chamber,” Politico reports.

“The Democratic field could become crowded: Secretary of State Maggie Toulouse Oliver and first-term Rep. Deb Haaland are both considering running. But Luján’s experience and the vast political and donor network established during his time as DCCC chairman gives him a significant edge in the Democratic primary.”

CNBC: “The discussion comes as Trump is threatening to close the southern border as soon as this week if Mexico does not completely halt illegal immigration to the U.S.”

“The Supreme Court ruled Monday that the Constitution does not guarantee a ‘painless death’ for condemned murderers, deciding that a Missouri inmate may be executed by a lethal injection despite a rare condition that could cause him to suffocate,” the Los Angeles Timesreports.

“By a 5-4 vote, the court rejected an appeal from Russell Bucklew, who maintained the state must seek out another method of execution, such as lethal gas, to carry out his execution.”

Think Progress: “Neil Gorsuch’s majority opinion tosses out a basic assumption which animated the Court’s understanding of what constitutes a ‘cruel and unusual’ punishment for more than half a century. In the process, he writes that the state of Missouri may effectively torture a man to death — so long as it does not gratuitously inflict pain for the sheer purpose of inflicting pain.”

Beto O’Rourke said he would require his Cabinet to hold monthly town hall meetings if he is elected president in 2020, CNN reports. The former Texas congressman said he would sign an executive order on his first day in office requiring the town halls “to listen to you and to be accountable to you so that we deliver for you.”

Said O’Rourke: “Not a handpicked audience. Not a theatrical production. But a real, live, town hall meeting — not just to answer questions, but to be held accountable.”

Bloomberg: “Saudi Arabia and Egypt are unlikely to throw their weight behind the proposal being drawn up by Jared Kushner, the president’s son-in-law and adviser, and White House Middle East peace negotiator Jason Greenblatt, according to interviews with key diplomats and analysts in Washington.”

“One diplomat described the initiative, which has yet to be made public, ‘hocus pocus’ and doubted whether Trump — who has raised questions about whether he supports a Palestinian state — cares about a negotiated settlement.”