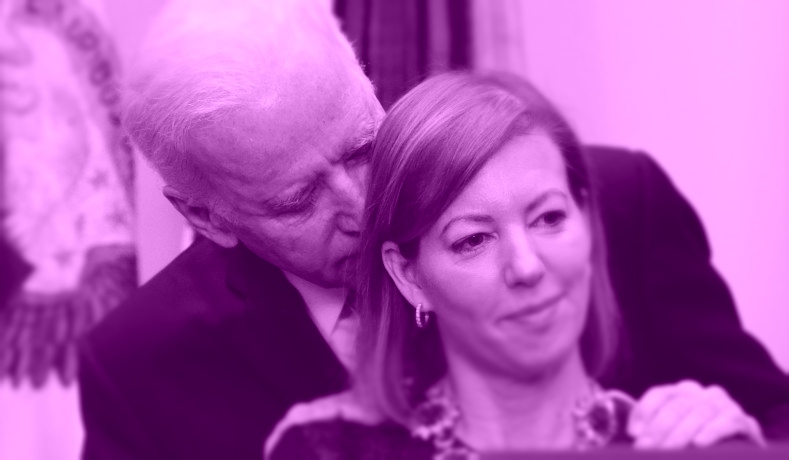 Back when the #MeToo movement started and we called on Al Franken to resign, I warned about Biden. This is what I said: “And be prepared for some Biden allegations.  He always was very touchy feely.” Eighteen months later…. Lucy Flores, the former Democratic nominee for Nevada lieutenant governor, writes in The Cut about an “inappropriate encounter” with former Vice President Joe Biden when he campaigned for her in 2014.

Said Flores: “He proceeded to plant a big slow kiss on the back of my head. My brain couldn’t process what was happening. I was embarrassed. I was shocked. I was confused.” She added: “I couldn’t move and I couldn’t say anything. I wanted nothing more than to get Biden away from me. My name was called and I was never happier to get on stage in front of an audience.”

President Trump “threatened to close the U.S. border with Mexico next week, potentially disrupting millions of legal border crossings and billions of dollars in trade if Mexico does not stop immigrants from reaching the United States,” Reuters reports.

Said Trump: “I’ll just close the border, and with a deficit like we have with Mexico and have had for many years, closing the border will be a profit-making operation.”

Vox: “But that is not at all how trade works.”

Washington Post: “Since Attorney General William Barr said last weekend that the special counsel’s investigation into Russian interference in the 2016 election found no conspiracy between the president’s campaign and Moscow, Trump has seemed most interested in how the findings are playing on TV.”

“He has reveled in the falling ratings of networks he claims unfairly covered the Russia investigation while celebrating his allies in conservative media who joined him in calling special counsel Robert Mueller’s probe a ‘hoax’ all along. Trump has checked ratings daily, according to his aides, and has bragged to senators and others that Fox News is doing better than competitors like MSNBC and CNN.”

“Republicans are setting their sights on top Obama-era officials as they plan their own probe into the 2016 election,” The Hill reports.

“Eager to move on from special counsel Robert Mueller’s investigation into Russian election interference and the Trump campaign, GOP senators are gearing up to investigate ‘the investigators.’ The idea is gaining traction within the Republican caucus, including from Majority Leader Mitch McConnell (R-KY).”V

“Beto O’Rourke will hold a major rally in El Paso, Texas, on Saturday, a city thrust to the center of America’s immigration debate by President Trump and the U.S government this week,” Reuters reports.

“O’Rourke, a former congressman from El Paso, will kick off three rallies in Texas in his bid to become the Democratic nominee a day after Republican Trump threatened to close the U.S border with Mexico as soon as next week.”

“Stacey Abrams is set to reveal soon whether she’ll run for president or senator or something else,” Politico reports. “But in recent months, the Democrat has mounted a nationwide, largely below-the-radar effort to expand her donor and political network that will make her an instant force whatever she decides.”

Stephen Moore, the economics commentator chosen by President Trump for a seat on the Federal Reserve board, was found in contempt of court after failing to pay his ex-wife more than $300,000 in alimony, child support and other debts, the Guardian reports.

“In a divorce filing in August 2010, Moore was accused of inflicting ’emotional and psychological abuse’ on his ex-wife during their 20-year marriage. Allison Moore said in the filing she had been forced to flee their home to protect herself. She was granted a divorce in May 2011.”

Harry Enten: “Buttigieg just scored his highest Democratic primary national poll number to date at 4% of Democrats and Democratic leaning registered voters, according to Quinnipiac University. That easily beats his old high of 1% in a live interview national poll. A jump of 3 points may not seem like a lot, but, because the margin of error shrinks significantly the closer you get to 0, the move from 1% to 4% is likely statistically significant.”

“Obviously, the Quinnipiac poll is just one poll, but it is just the latest sign that the Buttigieg brand is rising among Democrats.”

“Maria Butina has waived her right to try to stay in the United States after serving her sentence,” the Daily Beast reports.

“In the filing, released on Friday, Butina asked for a judicial order of removal, which would keep her and the government from having to go through the typical process Immigration and Customs Enforcement (ICE) uses to deport immigrants. In short, the filing expedites her deportation from the country. In the filing, Butina––a Russian national, who pleaded guilty to one conspiracy count––said she does not expect to face persecution or torture in Russia.”

“The end of the special counsel’s investigation sparked fresh speculation that President Trump might pardon some of those charged in the probe. It’s also spawned a don’t-go-there chorus from some of Trump’s closest advisers and GOP allies,” the AP reports.

“They’re warning that pardons could ignite a political firestorm that overshadows what Trump sees as a moment of triumph.”

New York Times: “The race for cash in the 2020 Democratic presidential primary is reaching a frenetic peak this weekend with a dozen fund-raisers on both coasts, as presidential hopefuls rush to vacuum up $2,800 checks — the maximum amount individuals can give for the primary by law — before the first quarterly fund-raising deadline of the campaign at midnight on Sunday. But the candidates don’t want to discuss any of this.”