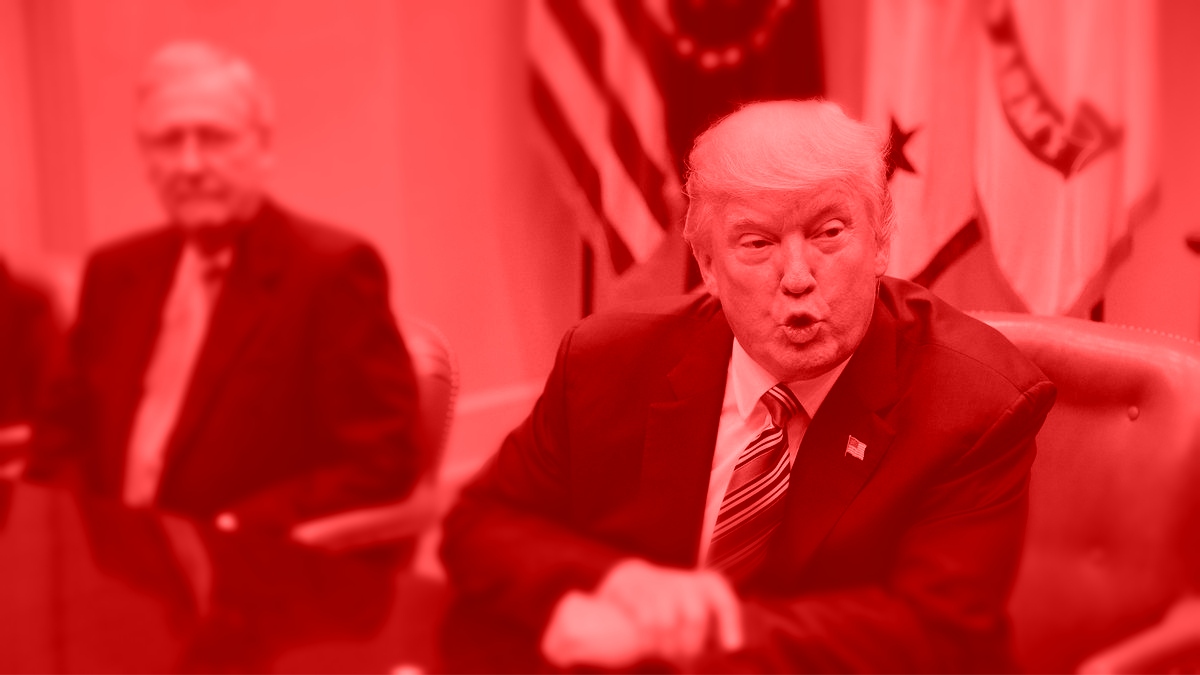 President Trump reiterated that the Republican party will now be the “party of great healthcare,” CBS News reports. Said Trump: “I mean it 100 percent, I understand healthcare now, especially very well. A lot of people don’t understand it, we are going to be, the Republicans, the party of great healthcare. The Democrats have, they’ve let you down, they came up with Obamacare, it’s terrible.”

However, Republican leaders have privately told Trump to back off his efforts to have the law overturned in the courts. “Reflecting widespread concerns within his party, House Minority Leader Kevin McCarthy (R-CA) has told President Trump he disagrees with the Trump administration’s attempt to get the entire Affordable Care Act thrown out in court,” Axios reports.

“McCarthy told Trump over the phone that the decision made no sense — especially after Democrats killed Republicans in the midterms in part over the issue of pre-existing conditions.”

“McCarthy is far from alone in this view. Republican lawmakers and officials are exasperated about the Justice Department’s position and about Trump’s substance-free declaration that Republicans will become ‘The Party of Healthcare.’”

Too late Kevin. Trump is the Republican Party. What he does, you all do. What he is, you all are. The reason for that is that you all refuse to put any daylight between you on any issue. You support him 99% of the time on all issues. So you don’t get to complain now.

“The Trump administration’s surprising move to invalidate Obamacare on Monday came despite the opposition of two key cabinet secretaries: Health and Human Services Secretary Alex Azar and Attorney General Bill Barr,” Politico reports. “Driving the dramatic action were the administration’s domestic policy chief, Joe Grogan, and the acting director of the Office of Management and Budget, Russ Vought… Both are close allies of White House acting chief of staff Mick Mulvaney, who helped to engineer the move.”

I saw something on Twitter today that the actual Mueller report was 700 pages long and that there were 2,000,000 pages of documentary evidence.

Stephen Moore, the conservative economics commentator chosen by President Trump for a seat on the Federal Reserve board, is being pursued by the federal government for $75,000 in taxes that it alleges he owes, The Guardian reports. Moore said he disputed the IRS claim and was “eager to reach an agreement” with authorities but had been frustrated by bureaucracy at the agency.

Politico: “President Trump’s choice of former campaign adviser Stephen Moore to serve on the Federal Reserve Board is stirring misgivings among some bankers, who worry that the conservative economist would erode the Fed’s political independence.”

“A half-dozen bank representatives interviewed on Tuesday privately said they aren’t planning to take a position on the nomination, but their reservations are likely to come up in conversations with Republican senators, which could complicate Moore’s path to confirmation amid strong opposition from Democrats.”

Britain’s House of Commons failed to get a majority on any of the eight alternatives to Prime Minister Theresa May’s Brexit deal, the BBC reports. Of course, there’s no majority for May’s deal either.

A U.S. District Court judge in Washington rejected the Trump administration’s efforts to require poor people on Medicaid to be compelled to seek work in exchange for health benefits, blocking a Kentucky program for a second time and saying rules in effect in Arkansas “cannot stand,” the Washington Post reports.

“The president’s executive orders are more modest, though Americans wouldn’t know it from the ceremonies the White House stages. Many orders seek action from Cabinet secretaries, something Trump could easily accomplish with a phone call.”

“You want to tell people that their concern and their desire for clean air and clean water is elitist? Tell that to the kids in the south Bronx which are suffering from the highest rates of childhood asthma in the country. Tell that to the families in Flint.”

— Rep. Alexandria Ocasio-Cortez (D-NY), delivering an impassioned defense of the Green New Deal after a GOP congressman attacked the resolution as an elitist plan created by “rich liberals from New York of California.”

A federal prosecutor said in court that the special counsel’s grand jury investigating Russian collusion into the 2016 presidential election is “continuing robustly” despite the end of Robert Mueller’s probe, Politico reports. “The fact the grand jury is continuing its work adds a new layer of uncertainty to the Mueller probe, which Attorney General William Barr announced on Friday was finished.”

Sen. Susan Collins (R-ME) said she’s “surprised” and “appalled” by the Trump administration’s decision to argue in court that the Affordable Care Act should be thrown out, Axios reports. Said Collins: “I’m appalled. I think the Justice Department has a duty to defend the duly enacted laws… I was surprised and disappointed. If the president disagrees with a law, then he should should ask Congress to repeal or change that law. He should not try to get rid of it through the courts.”

Wall Street Journal: “Of the seven Republican senators up for re-election in seats rated as Lean Republican or Likely Republican in 2020 by the nonpartisan Cook Political Report, only Sen. Susan Collins (R-ME) voted to terminate the national emergency. Sen. Cory Gardner (R-CO), who is running in a state Hillary Clinton won in 2016, voted to uphold the president’s emergency declaration.”

“The other 11 Republicans besides Ms. Collins who voted with the entire Democratic caucus and dared break with the president won’t face re-election fights this cycle, though some have still faced backlash.”

“President Trump complained in a private lunch Tuesday with Senate Republicans about the amount of disaster aid designated for Puerto Rico, as lawmakers prepare for a standoff over funds for the island still struggling to recover in the aftermath of Hurricane Maria,” the Washington Post reports.

“Aid for Puerto Rico has long been a fixation for Trump, who has asked advisers how to reduce money for the island and signaled that he won’t support any more aid beyond food stamp funds.”

Larry Sabato’s Crystal Ball: “As usual, the presidential outcome will depend heavily on factors beyond the full control of anyone, such as the state of the economy. Democrats only control who they nominate and what they emphasize in the campaign. The long campaign can give them the opportunity to size up the contenders and (they hope) choose the one with the best chance against Trump. Or they could pick another George McGovern, Walter Mondale, or Michael Dukakis — weak nominees, all. On policy, Democrats have a wide variety of subjects that could allow them to make a favorable contrast with Trump: climate change, health care, and economic fairness, just to mention three. The message and the messenger will be critical. The Democrats did not really run on the Mueller probe in the 2018 campaign, and for the most part, the 2020 candidates haven’t really been doing that either. Now the Democratic contenders will certainly not do so, though other investigations of Trump may bear fruit and become campaign fodder.”

“2020 should be a close, competitive, high-turnout election with both sides energized, given what we know today. But lots of factors can tilt the result one way or another. What’s not going to change is Donald Trump. People decided a long time ago what they thought of him, and it has hardened into concrete for the millions who love him as well as the millions who hate him. While we do not know in detail what the full Mueller report will say, the Barr summary, whatever its biases and omissions, suggests what we already thought was the likeliest scenario: The fate of the Trump presidency is on track to be decided at the ballot box, as opposed to a courtroom or impeachment proceeding. That may be a good thing or a bad thing, but like Coca-Cola, it’s the real thing.”

Rep. Ben Ray Luján (D-NM) is expected to run for Senate in 2020, abandoning a chance to move up the rung in House leadership, Politicoreports.

“It is a sharp change of course for the fast-climbing congressman, a close ally of Speaker Nancy Pelosi who led House Democrats’ campaign arm to victory in 2018 and then catapulted into the new Democratic majority’s No. 4 leadership position. But while Luján hasn’t made an official decision, he is leaning heavily toward jumping into the race to replace retiring Sen. Tom Udall, according to multiple Democratic lawmakers and aides familiar with Luján’s thinking.”

“A Wisconsin judge threw out parts of lame-duck laws Tuesday, dealing a second blow in less than a week to measures Republicans passed in December to curb the powers of two of Wisconsin’s top Democrats,” the Milwaukee Journal Sentinel reports.

“The ruling strengthens Democrats’ position, at least for now, because Republicans would need to get two orders from appeals courts to put the laws back in place.”

George Conway: “Mueller isn’t prone to cheap shots; he plays by the rules, every step of the way. If his report doesn’t exonerate the president, there must be something pretty damning in it about him, even if it might not suffice to prove a crime beyond a reasonable doubt.”

“And in saying that the report ‘catalogued the President’s actions, many of which took place in public view,’ Barr’s letter makes clear that the report also catalogues actions taken privately that shed light on possible obstruction, actions that the American people and Congress yet know nothing about.”

“At the same time, and equally remarkably, Mueller, according to Barr, said he ‘ultimately determined not to make a traditional prosecutorial judgment’ regarding obstruction. Reading that statement together with the no-exoneration statement, it’s hard to escape the conclusion that Mueller wrote his report to allow the American people and Congress to decide what to make of the facts. And that is what should — must — happen now.”

CBS News: “A federal judge has declared a North Carolina law banning women from having abortions after the 20th week of pregnancy except in an urgent medical emergency is unconstitutional. The decision Monday by U.S. District Judge William Osteen in Greensboro gave state legislators 60 days before his ruling takes effect to allow them to amend abortion restrictions or appeal his ruling to a higher court.”

“The U.S. Supreme Court has protected abortion as a constitutional right until a fetus has developed enough to live outside the mother’s womb. The judge noted that North Carolina’s own medical expert conceded that’s almost never possible until the 22nd week of gestation.”