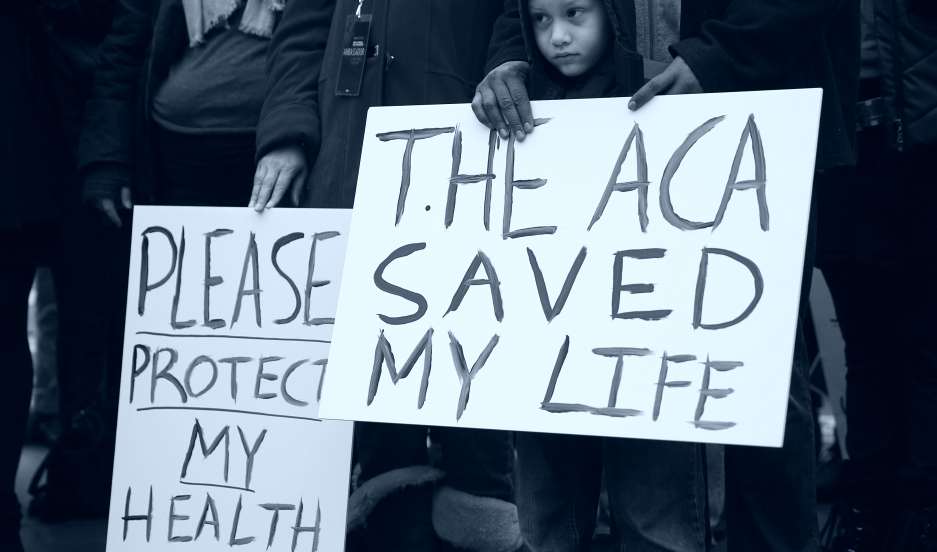 “The Trump administration on Monday said the entire Affordable Care Act should be struck down, in a dramatic reversal,” CNN reports. “In a filing with a federal appeals court, the Justice Department said it agreed with the ruling of a federal judge in Texas that invalidated the Obama-era health care law.”

“It’s a major shift for the Justice Department from when Jeff Sessions was attorney general. At the time, the administration argued that the community rating rule and the guaranteed issue requirement — protections for people with pre-existing conditions — could not be defended but the rest of the law could stand.”

“House Democratic leaders urged colleagues Tuesday to focus on health care and other issues of greater concern to voters following the completion of the special counsel’s report, even as some members argued they need to do more to hold President Trump accountable,” the Washington Post reports.

“Many Democrats appeared eager to pivot back to health care, an issue that cut their way during last year’s midterm elections, after a summary of special counsel Robert Mueller’s report suggested it was far less damaging to Trump than many had expected.”

“The top House Democrats argued that providing the report ‘in complete and unredacted form,’ along with the underlying evidence and materials, would be fully consistent with the Department of Justice’s practice and precedent with Congress.”

Natasha Bertrand: “Mueller’s full report has not been made available to the public yet, so it’s not clear whether it sets forth everything the special counsel’s office learned over the course of its nearly two-year investigation—including findings about conduct that was perhaps objectionable but not criminal—or whether it is more tailored and explains only Mueller’s prosecution and declination decisions. But national-security and intelligence experts tell me that Mueller’s decision not to charge Trump or his campaign team with a conspiracy is far from dispositive, and that the underlying evidence the special counsel amassed over two years could prove as useful as a conspiracy charge to understanding the full scope of Russia’s election interference in 2016.”

“A counterintelligence probe… would ask more than whether the evidence collected is sufficient to obtain a criminal conviction — it could provide necessary information to the public about why the president is making certain policy decisions.”

The FBI is prepared to brief congressional leaders on the counterintelligence findings of special counsel Robert Mueller’s investigation, NBC News reports. “The FBI opened a counterintelligence investigation into President Trump, and the letter sent to Congress on Sunday by Attorney General William Barr about the Mueller probe is silent on the question of whether investigators found that Trump or anyone around him might be compromised or influenced by Russia.”

“The officials said they expect the FBI to brief the so-called Gang of 8 — the leaders of the House and the Senate and the chairmen and ranking members of the intelligence committees — in closed session.”

“President Trump’s declaration of a national emergency at the U.S.-Mexico border survived a critical vote in the House on Tuesday, as Democrats failed to muster the necessary two-thirds majority to override his veto,” the Washington Post reports.

“The vote was 248-181, well short of the 288 that would have been required. The vote effectively ends — for now — legislative attempts to strike down Trump’s national emergency declaration. Now the fight over his attempt to circumvent Congress to get more money for his border wall will shift to the courts.”

Yahoo News: “The Republican Party’s efforts to build a small-dollar donation machine to keep up with the Democrats has hit a wall: a deep mistrust of President Trump and his campaign among Republican operatives.”

“Republican brass are crafting a new online fundraising tool to match the Democrats’ small-dollar fundraising juggernaut that helped carry them to victory in the 2018 midterm elections. But some GOP operatives who would be the ones to purchase the tool don’t want Trump and his family raiding their campaign lists for their own benefit.”

Former Trump campaign adviser George Papadopoulos, who served a 12-day prison sentence after being charged by special counsel Robert Mueller for lying to the FBI, told Reuters that he’s formally applied for a pardon from President Trump.

“President Trump last week intended to reverse sanctions imposed on two Chinese shipping companies accused of violating North Korea trade prohibitions — until officials in his administration persuaded him to back off and then devised a misleading explanation of his vague tweetannouncing the move,” Bloomberg reports.

“It was unclear if Brooks grasped that by leveling charges of the ‘big lie,’ he had inverted his own analogy, making Democrats the equivalent of interwar German and Austrian Jews. He set out to compare the other side to fascists, but he was the one employing a fascist smear — one that, ironically, came to define Nazi propaganda.”

“On the same day that the Pennsylvania House swore in its first Muslim women member Rep. Movita Johnson-Harrell (D), freshman Rep. Stephanie Borowicz (R), stepped to the House rostrum to offer a heartful prayer proclaiming her Christian beliefs and how the nation has forgotten Jesus and asking for forgiveness,” the Harrisburg Patriot-News reports.

Said Borowicz: “Jesus, you are our only hope. At the name of Jesus, every knee will bow and every tongue will confess Jesus, that you are Lord.”

“But it wasn’t until the ending of her prayer when House Speaker Mike Turzai (R) appeared to reach out to seemingly cut her off… The prayer drew ire from House Minority Whip Jordan Harris (D) who accused Borowicz of weaponizing her religion to ‘intimidate, demean and degrade’ the newly installed Muslim representative in front of her family, friends and guests who gathered to witness her take the oath of office.”

Said Pelosi: “We have to see the report. We cannot make a judgment on the basis of an interpretation by a man who was hired for his job because he believes the President is above the law and he wrote a 19-page memo to demonstrate that.”

John Harris: “We can’t all seem to agree that it’s a good thing the president didn’t conspire with Russia, nor can we all admit that the Kremlin may have helped elect Trump.”

“Forty-five years ago, after Watergate resulted in Richard Nixon’s resignation, even Republicans joined in the ritual sermonizing about how the episode proved the primacy of law. No doubt even in those days there was ample pretense beneath the piety—of course Democrats were gloating and Republicans were plotting payback. But the very fact that they bothered to pretend revealed a basic respect that American political culture was on the level.”

“These days, the one point on which warring sides all seem to agree is that American political culture in the Trump era is fundamentally not on the level. The Trump-Russia episode proves the primacy not of law or even of politics, both of which are designed to reconcile conflicting values and lead to resolution. It shows the primacy of psychology, in which current events represent a nonstop Rorschach test — what does it look like to you? — and virtually no factual assertion can be embraced at face value. In this prism, the main purpose of argument is to show fidelity to the home team, and not to settle a matter but to keep it going.”

Catherine Rampell: “President Trump has made a lot of ill-advised nominations. But perhaps no single choice could inflict more long-term damage than the one he announced Friday: Stephen Moore, Trump’s pick to join the Federal Reserve Board.”

“Moore’s many economic claims over the years have revealed him to be, shall we say, easily confused…”

“A newspaper banned him from its pages because of his struggles in getting basic statistics right. During the dozens of times I’ve debated him on TV, he has persistently misstated easily Google-able facts. These include whether the country is experiencing deflation, whether Canada’s tariffs are ‘twice as high as’ ours, and whether the Fed predicted that Trump would crash the stock market. (Nope, nope, and huh?)”

“Now, somehow, Moore has been nominated to the Fed.”

“In the first major policy rollout of her presidential campaign, Sen. Kamala Harris (D-CA) unveiled a plan on Tuesday to spend hundreds of billions of dollars to boost teacher salaries,” NBC News reports.

“Billed as ‘the largest investment in teachers in American history,’ the plan would devote $315 billion in federal funding over the next 10 years toward programs that would subsidize pay for public K-12 educators and reward state and local governments for raising them even higher. It would be paid for by as-yet unspecified changes to the estate tax, which currently applies only to inheritances over $11.4 million for individuals and $22.8 million for married couples.”

New York Times: “Over the last two years, [Kamala] Harris has systematically constructed a database of donors and email addresses that raised several million dollars for her fellow Democrats, demonstrating an uncommon potency for a first-term senator.”

“Now, as she makes her own run for president, her digital following serves as a kind of stealth weapon, putting her in perhaps the best position to challenge the small-dollar fund-raising operations of two top rivals, former Representative Beto O’Rourke of Texas and Senator Bernie Sanders of Vermont.”

“The U.S. Supreme Court on Tuesday appeared divided along ideological lines again on whether the contentious practice of manipulating electoral district boundaries to entrench one party in power may violate the constitutional rights of voters, with Justice Brett Kavanaugh emerging as the potential deciding vote,” Reuters reports.

“More than two hours of arguments in major cases from North Carolina and Maryland on the practice known as partisan gerrymandering focused on whether courts should be empowered to block electoral maps when they are drawn by state legislators expressly to give one political party a lopsided advantage.”

“Conservative justices, who have a 5-4 majority on the court, signaled skepticism toward judicial intervention while liberal justices seemed supportive. The ruling is due by the end of June.”