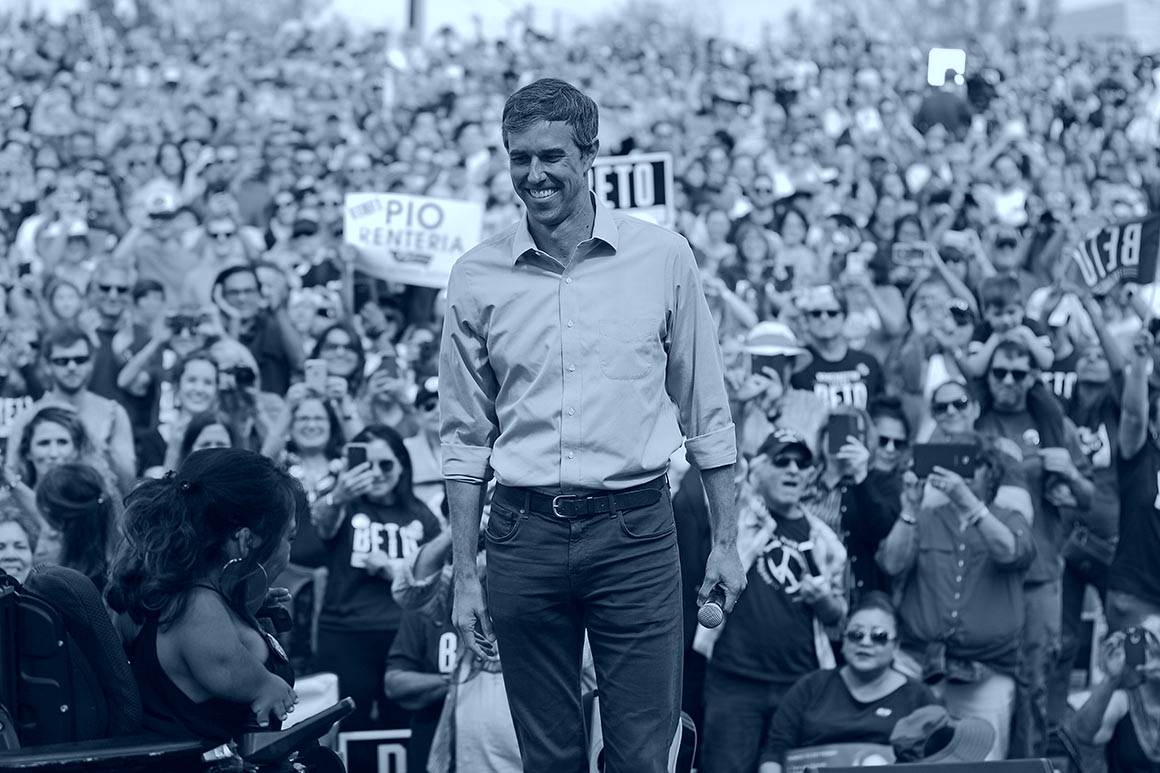 Beto O’Rourke announced he was entering the presidential race with a video. Said O’Rourke: “This is a defining moment of truth for this country and for every single one of us. The challenges that we face right now — the interconnected crises in our economy, our democracy and our climate — have never been greater. And they will either consume us, or they will afford us the greatest opportunity to unleash the genius of the United States of America.”

“In other words, this moment of peril produces perhaps the greatest moment of promise for this country and for everyone inside of it.

New York Times: “His decision jolts an early election season already stuffed with contenders, adding to the mix a relentless campaigner with a small-dollar fund-raising army, the performative instincts of a former punk rocker and a pro-immigrant vision to counteract President Trump’s.”

Jonathan Chait: “O’Rourke’s actual reason for running is perfectly clear: He is a highly charismatic and inspirational… He is saying he has natural gifts as a political communicator, and believes he should put them to use for the purpose of beating Donald Trump and otherwise making the world a better place.”

“This is a good reason to run for the presidency! Politics is a team sport, and enacting political change requires effort from a wide array of actors: policy advisers, legislators, bureaucrats, and activists. The president of the United States is only one of those actors, albeit the most important by far, and his or her most important role is serving as a messenger for the party. Being an effective, telegenic communicator is a crucial job qualification and a vital asset.”

“O’Rourke’s argument is that he’s sufficiently well-versed in policy to make good decisions — which, again, may or may not be true, but which he’ll have the chance to demonstrate — and that his skills as a communicator set him apart.”

“The Senate easily voted to overturn President Trump’s declaration of a national emergency at the southwestern border, delivering a bipartisan rebuke to what lawmakers in both parties deemed executive overreach by a president determined to build his border wall over Congress’s objections,” the New York Times reports.

“The 59-41 vote on the House-passed measures set up the first veto of Mr. Trump’s presidency. It was not overwhelming enough to override Mr. Trump’s promised veto, but Congress has now voted to block a presidential emergency declaration for the first time — and on one of the core promises that animated Mr. Trump’s political rise, the vow to build a wall between the United States and Mexico.”

Here is the vote count. Interestingly, the most vulnerable Republicans in 2020 all voted with Trump and thus sealed their fate.

Beto O’Rourke told the El Paso Times that his presidential campaign will be headquartered in El Paso and those who want to join his team will have to move to the border city. “But he also said he would no longer swear off hiring consultants, giving an example of a single mother in the Dallas area who was unable to join his Senate campaign because it would have required her to close her business.”

Said O’Rourke: “My preference is to find people who can move to El Paso and work on this campaign full time, but in order to get the breadth of experience and wisdom and diversity that we really need in a campaign that will look like everyone, I want to remain open to different employment situations. It doesn’t fit on a bumper sticker, but it will ensure that I get the greatest talent possible.”

“One of the most prominent members of special counsel Robert Mueller’s team investigating Russia’s attack on the 2016 presidential election will soon leave the office and the Justice Department,” NPR reports.

“Andrew Weissmann, the architect of the case against former Trump campaign chairman Paul Manafort, will study and teach at New York University and work on a variety of public service projects, including his longstanding interest in preventing wrongful convictions by shoring up forensic science standards used in courts… The departure is the strongest sign yet that Mueller and his team have all but concluded their work.”

Los Angeles Times: “Stone is due back in federal court on Thursday to face U.S. District Judge Amy Berman Jackson, who is overseeing his case and appears to be running out of patience with him.”

“He first angered the judge last month with an inflammatory Instagram post that included a crosshairs symbol next to her head. In response, Jackson tightened her gag order and barred Stone from saying almost anything in public about the case.”

“But Stone is in hot water again because he failed to tell Jackson about the imminent publication of a book called The Myth of Russian Collusion, an updated version of a tome that was first released shortly after the 2016 election.”

“The House passed a resolution—with overwhelming bipartisan support—calling for a public release of special counsel Robert Mueller’s anticipated report on his investigation into Russian interference in the 2016 presidential election,” the Wall Street Journal reports. The vote was 420 to 0.

Molly Ball: “Conventional wisdom in Washington tends to treat impeachment as a fringe crusade, on a par with campaigns by anti­fluoridation activists or UFO ­enthusiasts, and views Pelosi as right to resist this momentum. Many believe it would be a political disaster for Democrats, galvanizing Trump’s base and alienating moderates. Republicans have taken to goading their opponents to try it, while White House officials say they relish the prospect of the Democratic Party tearing itself apart over the issue.”

“But Pelosi is actually playing a deeper game. Her aides note that she’s never ruled impeachment out. All she’s done, they say, is set a ­standard: ­increased popular support and some degree of GOP backing. Behind the scenes, she and her team are working to see that standard is met.”

Said one senior Pelosi aide: “The easy thing to do would be to start down the path of impeachment. That’s a trap. Now that we have the gavel and can expose all of this wrongdoing, I think you will start to see a shift in public opinion and movement of Republicans.”

“The House of Commons voted in favor of delaying Brexit day beyond March 29, either to give time to implement a deal or to give time for an alternative course of action,” Politico reports.

“MPs voted by 412 to 202 (a majority of 210) in favor of a government motion that Theresa May was effectively forced into laying before the house after parliament voted Wednesday night to rule out a no-deal Brexit.”

President Trump appeared to threaten potential violence against his political opponents, telling Breitbart that “it would be very bad, very bad” if his supporters were provoked into getting “tough.”

“The Senate voted Wednesday to end U.S. support for the Saudi-led military campaign in Yemen, its latest rebuke of the Trump administration’s continued embrace of the Saudi monarchy despite growing frustration among lawmakers with its actions on the world stage,” the Washington Post reports.

“The 54-to-46 vote marks the second time in recent months that the Senate has rejected the United States’ continued participation in Saudi Arabia’s bombing campaign against Yemen’s Houthi rebels, waged in the name of holding back Iran’s expansion in the region. But the Saudi-led effort, which has at times targeted civilian facilities and prevented aid shipments from getting to Yemenis, has been faulted by human rights organizations for exacerbating what the United Nations has deemed the world’s worst humanitarian catastrophe.”

First Read: “What made O’Rourke a star in 2018, and what gives him promise in 2020, was his ability to raise money ($80 million for a Senate candidate) and to draw big crowds. So can he come close to the nearly $6 million Bernie Sanders raked in during his first 24 hours as a 2020 candidate? Can he exceed or double the $1.5 million Kamala Harris raised in her first day?”

“As for the crowds, O’Rourke will spend the next three days in Iowa, hitting Burlington and Muscatine (today), Mount Pleasant and Cedar Rapids (on Friday) and Waterloo and Dubuque (Saturday). He’s the first major 2020 candidate to immediately head to Iowa after announcing a bid.”

“No Democrat in the 2020 field is as boom-or-bust as Beto. He’s either going to take off, justifying the Oprah appearance and Annie Leibovitz photo spread. Or he’s going to fall flat, proving that his 2.5-point loss in Texas (compared with Hillary’s 9-point defeat there in 2016 or Obama’s 16-point loss) was lightning in a bottle.”

Ron Brownstein: “The sprawling Democratic field is already so large, and so diverse in race and gender, that strategists are expecting tough competition in the early stages for almost every group of voters imaginable. But there’s one potential exception to that pattern: older voters. Even in a rapidly diversifying party, it’s virtually certain that most Democratic primary voters next year will be older than 45. Yet most of the top-tier candidates look best suited to compete for younger voters, an imbalance that grew more lopsided with the announcement from O’Rourke, who connected powerfully with youthful audiences during his narrow loss in last fall’s Texas Senate race.”

“This divergence could provide an important tactical advantage for former Vice President Joe Biden, who is likely to rely more on older than younger voters if he enters the race. It also suggests that O’Rourke is on a collision course with Bernie Sanders over the allegiance of youthful voters, who fueled the Vermont senator’s 2016 campaign.”

“An appellate court in New York has rejected President Trump’s assertion that a sitting president cannot be sued in state court — a ruling stemming from a defamation lawsuit filed by a former The Apprentice contestant who accused the president of groping and kissing her in 2007,” ABC News reports. “Summer Zervos’ lawsuit is now allowed to proceed with the prospect of the president having to sit for a deposition.”

The Washington Post notes the court cited the U.S. Supreme Court’s ruling in Clinton v. Jones, which established that presidents can be sued while in office for unofficial acts.

Wall Street Journal: “Two of the Democrats’ best-funded outside groups — both of which are backed in part by New York billionaire George Soros — are planning at least a $130 million campaign to attack President Trump and build support for Democrats in Wisconsin, Michigan, Pennsylvania and Florida, where Mr. Trump narrowly prevailed over Democrat Hillary Clinton in 2016. A third group, an $80 million voter-engagement effort, is at work in these and three other battleground states.”