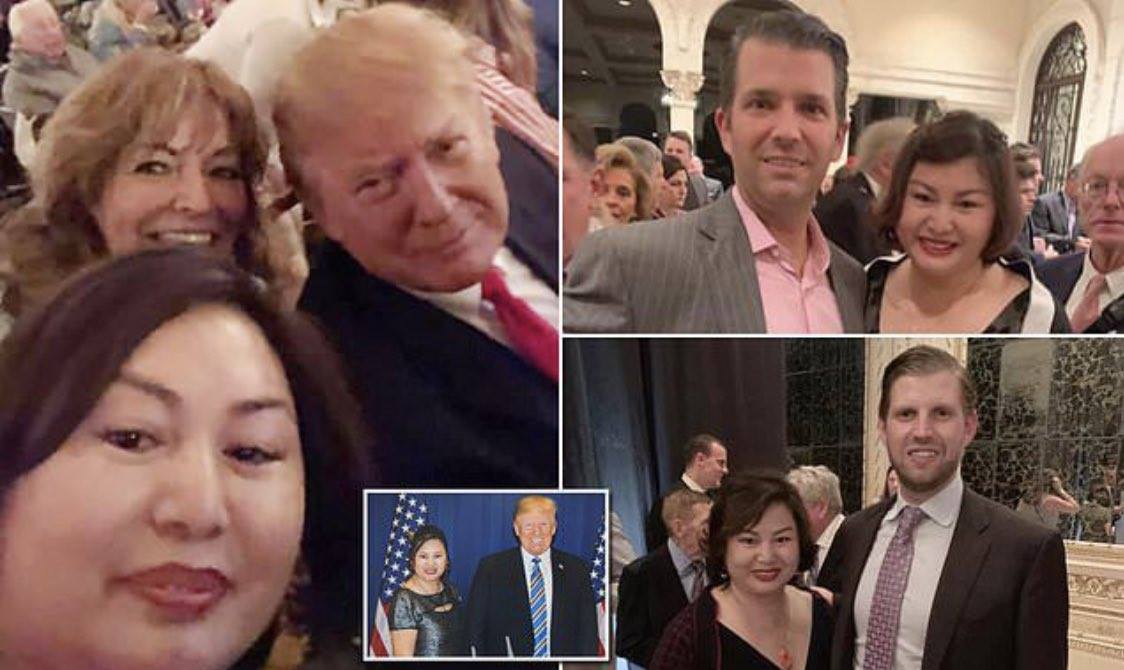 Cindy Yang, a Florida entrepreneur who founded a chain of spas and massages parlors that included the one where New England Patriots owner Robert Kraft was arrested recently for allegedly soliciting prostitution, also runs a consulting business that has offered to sell Chinese clients access to President Trump and his family at Mar-a-Lago, Mother Jones reports.

Yang, a donor to the Republican Party and Trump campaign, popped up this week in photos showing her at a Super Bowl viewing party at the Trump-owned Mar-a-Lago that included a selfie with the president.

A new Des Moines Register/CNN poll in Iowa finds Joe Biden is the first choice for president of likely Iowa Democratic caucus-goers with 27%, followed by Sen. Bernie Sanders at 25%, Sen. Elizabeth Warren At 9%, Sen. Kamala Harris at 7% and Beto O’Rourke at 5%.

Said pollster Ann Selzer: “If I’m Joe Biden sitting on the fence and I see this poll, this might make me want to jump in. I just can’t find much in this poll that would be a red flag for Joe Biden.”

Jonathan Swan: “Republican donors in attendance called it one of Trump’s weirdest lies ever. On Friday night, under a tent erected over the pool at his Mar-a-Lago club in Florida, President Trump claimed the media were spreading ‘fake news’ when they said he called the CEO of Apple ‘Tim Apple.’”

“Trump told the donors that he actually said ‘Tim Cook Apple’ really fast, and the ‘Cook’ part of the sentence was soft. But all you heard from the ‘fake news,’ he said, was ‘Tim Apple.’”

“Two donors who were there told me they couldn’t understand why the president would make such a claim given the whole thing is captured on video.”

Generation Z has a more positive view of the word “socialism” than previous generations, and — along with Millennials — are more likely to embrace socialistic policies and principles than past generations, according to a new Harris Poll.

“Gen Z and Millennials are projected to make up 37% of the electorate in 2020, and what they’re looking for in a presidential candidate is shifting.”

Of course, if we delved deeper into what the media and Generations deem as “socialism,” it would not be the state owning the means of production, which is what socialism actually is, but “social democratic” policies that have an activist and engaged government providing social welfare services and regulating business and corporate interests. I fear the use of the term socialism will be our undoing.

Sen. Elizabeth Warren (D-MA) rejected Republican-fueled rumors that she’s a socialist, saying instead that she’s a capitalist who believes in markets that operate on “a level playing field,” the HuffPost reports. Said Warren: “It is not capitalism to have one giant that comes in and dominates. What I have supported all the way through are the kinds of things that help level the playing field.”

Warren is a Social Democrat. She is describing herself and her policies correctly, unlike Sanders or AOC.

Politico: “Senate Democrats say they’re increasingly open to getting behind Bernie Sanders if he appears the strongest candidate a year from now. And there’s no whiff of an effort to try and deny him the nomination, according to interviews with more than 20 Democratic senators.”

“It’s not that the Democratic Caucus is rallying behind him; most of them would prefer a more mainstream nominee, even if they’re unwilling to say it at this point. But they’re giving Sanders props for what he’s accomplished, and say if he’s able to win the nomination, more power to him.”

“President Trump will ask the U.S. Congress for an additional $8.6 billion to help pay for the wall he promised to build on the southern border with Mexico to combat illegal immigration and drug trafficking,” Reutersreports.

“The demand is more than six times what Congress allocated for border projects in each of the past two fiscal years, and 6 percent more than Trump has corralled by invoking emergency powers this year.”

“The narrative seemed to fit Venezuela’s authoritarian rule: Security forces, on the order of President Nicolás Maduro, had torched a convoy of humanitarian aid as millions in his country were suffering from illness and hunger,” the New York Times reports.

“But there is a problem: The opposition itself, not Mr. Maduro’s men, appears to have set the cargo alight accidentally.”

“Unpublished footage obtained by The New York Times and previously released tapes — including footage released by the Colombian government, which has blamed Mr. Maduro for the fire — allowed for a reconstruction of the incident.”

CNBC: A mysterious payment to Paul Manafort, “for $125,000, was made in June 2017, halfway through Trump’s first year in office. But it wasn’t disclosed publicly until late last year, when prosecutors accused Manafort in court filings of repeatedly lying to them about where the money actually came from.”

“In the world of presidential campaign fundraising, where millions of dollars are often raised and spent in a matter of weeks, $125,000 can seem like a drop in the bucket.”

“But the route this money traveled, from its origin as a donation made to a pro-Trump political group, to its final destination in the bank account of Manafort’s attorney, offers a rare glimpse into the inner workings of relationships Manafort built over 40 years in Republican politics.”

Jonathan Swan: “The plan — which acting chief of staff Mick Mulvaney and policy staff are developing, and which is in its early stages — would have Trump sign a series of executive orders on issues including education, drug pricing, the opioid epidemic and veterans affairs. Aides say the moves would appeal to Democrats and Republicans.”

“White House officials have already drafted some of these executive orders, and the White House Counsel’s office has started vetting them. Officials familiar with the planning say they think most Americans will back them, as was the case with criminal justice reform.”

“White House officials have been tight-lipped about the content of the orders, so it’s way too early to say if they will be substantive or just political theater.”

Politico: “With a thick crowd waiting in front of Austin’s Paramount Theatre, O’Rourke slipped into the premiere of his own documentary through an alley in the back. He waited for the lights to dim before joining the audience. And 10 days after declaring that he and his wife, Amy, had decided ‘how we can best serve our country,’ he once again refused to discuss his 2020 plans.”

Said O’Rourke: “I want to make sure I do it the right way and I tell everyone at the same time, so I’ll be doing that. I’ve got to be on the timeline that works for my family and for the country.”

“What is unusual is not that O’Rourke hasn’t said yet if he is running — Joe Biden hasn’t, either. It’s that O’Rourke, unlike any other potential presidential candidate, confirmed more than a week ago that he made his decision. He just won’t say what it is.”

Washington Post: “Celebrity exacts a cost, one that the documentaryshowed was borne by O’Rourke’s three young children…. The result is a glimpse at a wrenching reality rarely seen in the sanitized, smiling images usually put forth by candidates.”

“In one scene … O’Rourke’s wife explained that the children started writing old-school letters to their father instead of video-chatting with him because ‘after they hung up on the phone … they were in tears and really upset.’ The O’Rourke children recounted watching two heavily armed gun-rights activists confront their father at a gun-control march. And on the night their father lost the election, the children discussed how it made them sad to watch others cry.”

Said Amash: “From the time the president was elected, I was urging them to remain independent and to be willing to push back against the President where they thought he was wrong. They’ve decided to stick with the president time and again, even where they disagree with him privately.”