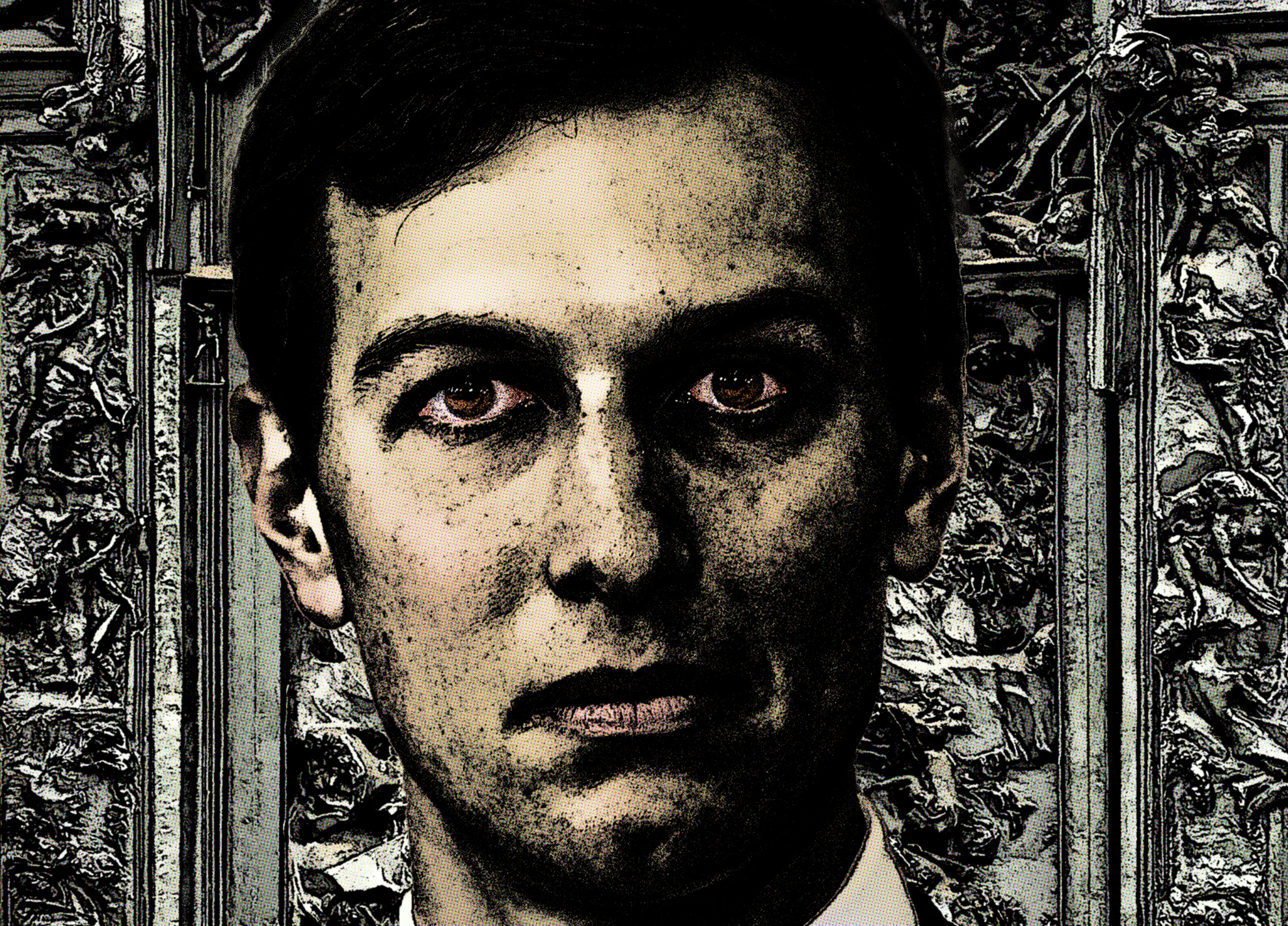 “President Trump ordered his chief of staff to grant his son-in-law and senior adviser, Jared Kushner, a top-secret security clearance last year, overruling concerns flagged by intelligence officials and the White House’s top lawyer,” the New York Times reports. “Mr. Trump’s decision in May so troubled senior administration officials that at least one, the White House chief of staff at the time, John Kelly, wrote a contemporaneous internal memo about how he had been ‘ordered’ to give Mr. Kushner the top-secret clearance.”

“The White House counsel at the time, Donald McGahn, also wrote an internal memo outlining the concerns that had been raised about Mr. Kushner — including by the C.I.A. — and how Mr. McGahn had recommended that he not be given a top-secret clearance.”

“The disclosure of the memos contradicts statements made by the president, who told the New York Times in January in an Oval Office interview that he had no role in his son-in-law receiving his clearance.”

Rep. Gerry Connolly (D-VA), who is on the oversight committee, says he wants John Kelly to come before the committee to discuss Trump’s order to issue Jared Kushner the highest level security clearance over the recommendations of security officials. He also wants the committee to get the memo Kelly wrote to memorialize what happened.

Washington Gov. Jay Inslee (D) “became the latest Democrat to launch a 2020 presidential bid, asserting in a video that he is the only candidate who will make combating climate change the nation’s top priority,” the Washington Post reports.

Said Inslee: “We’re the first generation to feel the sting of climate change, and we’re the last who can do something about it. We went to the moon, and created technologies that have changed the world. Our country’s next mission must be to rise up to the most urgent challenge of our time — defeating climate change.”

“President Trump said he walked away from his second summit with North Korean leader Kim Jong Un because Kim demanded the U.S. lift all of its sanctions, a claim that North Korea’s delegation called a rare news conference in the middle of the night to deny,” the AP reports.

“So who’s telling the truth? In this case, it seems that the North Koreans are. And it’s a demand they have been pushing for weeks in lower-level talks. Trump’s much-anticipated meeting with Kim, held in the Vietnamese capital Wednesday and Thursday, ended abruptly and without the two leaders signing any agreements.”

“The parents of Otto Warmbier, the American college student who died after being detained for 17 months in North Korea, on Friday directly blamed leader Kim Jong Un for their son’s death a day after President Trump said he believed Kim’s account that he was not responsible,” the Washington Post reports. Their statement is below:

“Senate Republicans are offering a choice to President Trump: Withdraw your national emergency declaration at the border or face a potential rebellion from the GOP. The message was delivered clearly on Thursday by Sen. Lamar Alexander (R-TN), part of an effort by senior Republicans to avoid a direct confrontation with Trump on the Senate floor,” Politicoreports.

“In a much-anticipated floor speech, the retiring senator declined to state whether he will become the deciding vote to block the president’s maneuver. But he signaled broad opposition to the emergency declaration and sought to convince Trump that he has other ways to collect $5.7 billion for the border wall — the precise amount of money he demanded during the government shutdown fight.”

“President Trump wants to raise $1 billion for his reelection. But his top advisers worry that the super PAC at the center of that effort is hurting, lacking a high-wattage leader who can cajole millionaire and billionaire donors to fork over huge sums,” Politico reports.

“Trump political aides, members of the president’s family, and top Republicans have been considering potential candidates to spearhead America First Action’s 2020 fundraising efforts. They want someone with deep ties to the president and the clubby world of major GOP donors.”

“But the nationwide search has so far come up empty.”

New York Times: “A small group of Republican strategists opposed to President Trump, branding themselves Defending Democracy Together, quietly conducted polling and focus groups last fall to gauge whether the president was vulnerable to a primary challenge in 2020. Assembling a presentation for sympathetic political donors, they listed points of weakness for Mr. Trump such as ‘tweeting/temperament’ and ‘criminality/corruption.’”

“The group concluded that Mr. Trump’s scandals were not yet badly damaging him with Republican-leaning voters: ‘Even relatively high information voters aren’t paying particularly close attention to day-to-day scandals,’ the presentation stated. But it added that there was ‘room to educate voters’ on the subject.”

“Michael Cohen, Mr. Trump’s former lawyer, may have begun that education on Wednesday.”

“I think not. Hillary and I have fundamental differences.” — Sen. Bernie Sanders, when asked on The View if he would ask Hillary Clinton for campaign advice. Sigh. I mean, while what Bernie said is true, Bernie realizes he has to win over Hillary voters to win this thing, right? What is the point of aggravating Hillary voters unnecessarily, or at least reminding them that Bernie has no respect for Hillary? It will remind those very same Hillary voters how much they disliked Bernie in 2016. Very bad politics by Bernie here. He could have easily said something like, “sure, she knows what it is like to run a national campaign, so of course I will listen to any advice she has.”

“The foreign-linked mystery company fighting to avoid handing over records demanded by special counsel Robert Mueller appears to have incurred a fine of $2.25 million as it presses its legal fight,” Politicoreports.

“The $50,000-a-day penalty a federal judge imposed on the foreign-government-owned firm continues to grow and might be boosted to accrue at a higher rate in the future, one court order made public indicates.”

RNC Chair Ronna McDaniel framed the differences between the two political parties as capitalism vs. socialism during an appearance at the Conservative Political Action Conference.

Said McDaniel: “It’s going to be a choice. Are we going to want capitalism? Look at all the great achievements of our country: flight, cars, the Internet. Sorry, Al Gore. The Internet. None of that came from government. It came from innovation. It came from the greatness of America.”

Philip Bump: “So here’s the thing. The Internet very much did come from government, quite literally.”

“The idea that we force someone to give up their liberty for the sake of the collective is not based on American values but rather, Communist.” — Arizona state Rep. Kelly Townsend (R), quoted by the Arizona Republic, arguing against mandatory vaccinations. She signed her Facebook post “live free or die.”

So vaccinations are now socialist. I look forward to deadly pandemics that take out the conservative population of the country. New proposal: failure to vaccinate your children means you lose your right to healthcare for life. No treatment for any condition for the rest of their life. Let them all die. For Freedom.

“All American troops would withdraw from Afghanistan over the next three to five years under a new Pentagon plan being offered in peace negotiations that could lead to a government in Kabul that shares power with the Taliban,” the New York Times reports.

“The rest of the international force in Afghanistan would leave at the same time, after having mixed success in stabilizing the country since 2001. The plan is being discussed with European allies and was devised, in part, to appeal to President Trump, who has long expressed skepticism of enduring American roles in wars overseas.”

President Trump called Rep. Matt Gaetz (R-FL) last night from Hanoi to talk about the Michael Cohen’s testimony before the House Oversight Committee and the threats, since rescinded, that Gaetz made about Cohen, The Atlantic reports.

Gaetz was heard telling Trump: “I was happy to do it for you. You just keep killing it.”

Former Maine Gov. Paul LePage (R) blasted a bill being considered by Maine’s legislature to join with other states to essentially bypass the Electoral College and ensure that the President is elected by the national popular vote, the Maine Beacon reports.

Said LePage: “Actually what would happen if they do what they say they’re gonna do is white people will not have anything to say. It’s only going to be the minorities that would elect. It would be California, Texas, Florida.”

LePage also labeled the proposal “an insane process” and warned that “we’re gonna be forgotten people.”