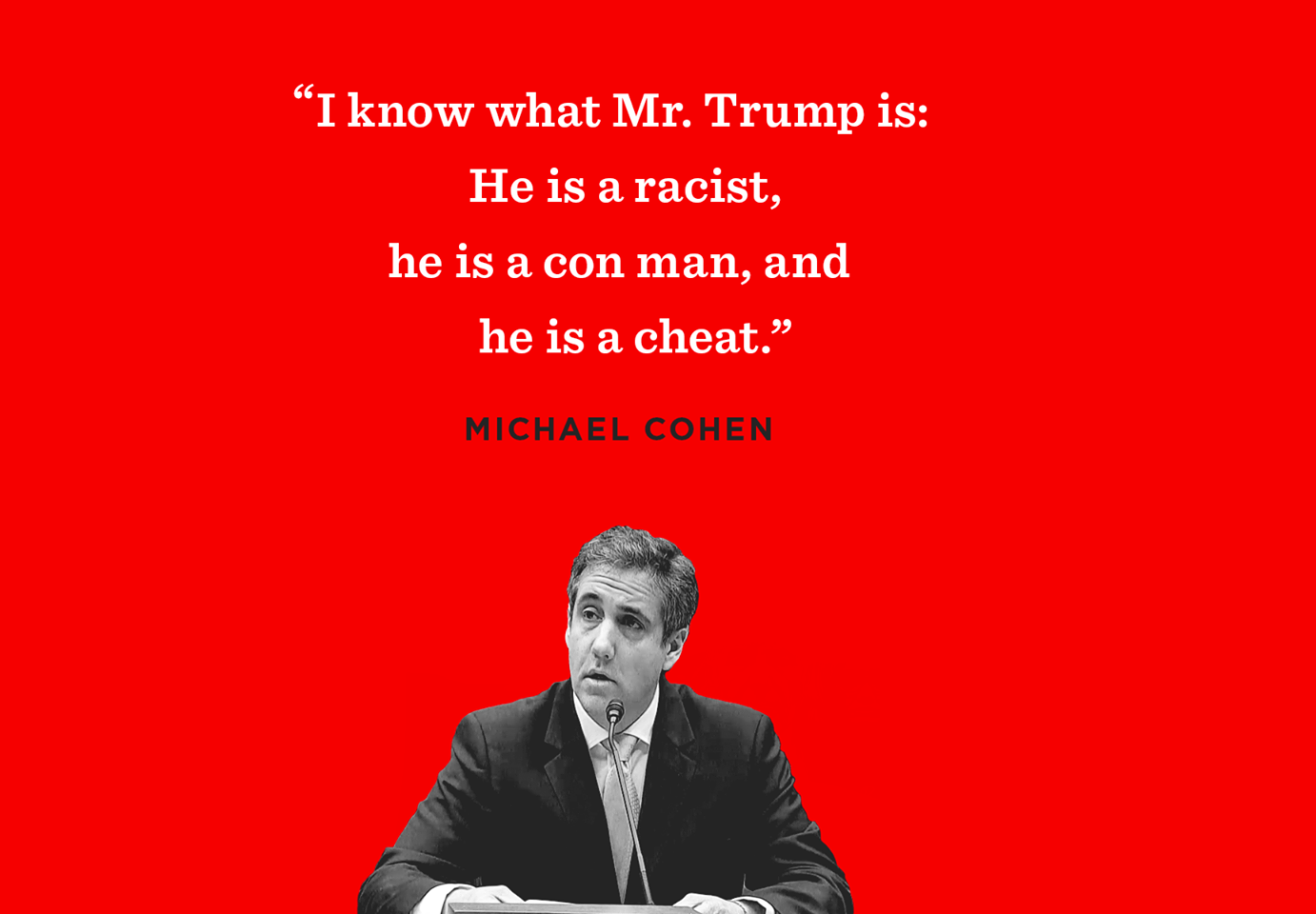 Adam Davidson: “Wednesday’s testimony is a huge moment in Trump’s Presidency. It is unlikely, though, to diminish the country’s political chasm. Cohen will be dismissed by the President and his allies as a liar trying to reduce his prison sentence. Trump’s supporters will continue to back him.”

“But it will be a kind of accounting, under oath and before the world, from Cohen that we haven’t had yet. It is only a beginning, a timid beginning, that both gives new information and is also a crucial performance, a visual image of Trump’s indecency that will be remembered for generations. It is unlikely to be the last.”

Michael Cohen told Congress that President Trump knew his longtime adviser Roger Stone was communicating with WikiLeaks about publishing stolen emails from the Democratic National Committee, the Washington Post reports. “Cohen calls Trump a ‘racist,’ a ‘conman’ and a ‘cheat’ and also levels accusations that the president personally signed a check to cover ‘hush money payments’ to keep quiet an affair with adult-film actress Stormy Daniels. Cohen says Trump never directly told him to lie to Congress about his business dealings in Moscow, but claims the president implicitly encouraged him to do so.”

New York Times: “The testimony underscores many of the unsavory themes and stories that have recurred in public reporting about Mr. Trump — he inflates his wealth, makes racist remarks, threatens his enemies and tries to bend the law to his favor — but puts them on the record, under oath, in the voice of a man who was one of Mr. Trump’s closest aides.”

Playbook: “Republicans are going to do their best to remind the public that his testimony reeks of opportunism as the man is on the brink of prison. But so few people have made it into Trump’s inner circle, and Cohen was in it for a decade. That’s why this is incredibly compelling. Now he’s going to prison with little else to lose, and a man with nothing to lose in a circumstance like this seems like he will have a lot to say.”

Playbook: “Republicans mostly focused on tarnishing Cohen, highlighting that he had lied in his life, and to others to benefit himself. They didn’t really focus on defending Trump in any material way. […] Cohen said Don Jr., Ivanka and Eric know everything about the Trump Organization. Is there any way Chairman Elijah Cummings (D-MD) won’t call them to testify soon?”

Jonathan Swan: “President Trump’s advisers say one of his more frequent gripes about the scandals and investigations — both by Mueller and the Hill — is that they weaken his standing with foreign leaders.”

“One of Trump’s former advisers said the president would tell stories of a foreign leader asking him about the special counsel’s investigation. The adviser interpreted that as Trump feeling humiliated by having to discuss it. Trump wants to claim a victory from his North Korean summit. And he also wants to, as he always does, produce good television.”

This was the big moment of the day that will likely live with us the longest. Michael Cohen testified that federal prosecutors are investigating unspecified criminal allegations regarding President Trump that haven’t been made public, the Washington Post reports. Rep. Raja Krishnamoorthi (D-IL) asked Cohen whether he was aware of “any wrongdoing or illegal act’”concerning the president that had not been acknowledged during Cohen’s testimony. Cohen said he was unable to answer because it’s a topic under investigation by the Southern District of New York.

Wall Street Journal: “We’re not sure what this means exactly, but it’s certainly an interesting revelation.”

“Beto O’Rourke has decided not to run for Senate next year against Republican incumbent John Cornyn and likely will announce a campaign for president soon,” confidants close to the former congressman told the Dallas Morning News. “Numerous people close to O’Rourke said they expect him to announce his presidential campaign within weeks. For his own part, O’Rourke on Wednesday wouldn’t reveal his future political plans except to say he has made up his mind.”

Said O’Rourke: “Amy and I have made a decision about how we can best serve our country. We are excited to share it with everyone soon.”

A new Quinnipiac poll in Texas may explain his decision: it finds Sen. John Cornyn’s (R-TX) approval rate at 43% to 26%, putting his net approval at +17.

“President Trump and Kim Jong-un, North Korea’s leader, abruptly ended their second summit meeting on Thursday when negotiations collapsed after the two sides failed to agree on even the first steps on nuclear disarmament, a peace declaration or reducing sanctions on the North,” the New York Times reports.

Said Trump: “It was about the sanctions. Basically they wanted the sanctions lifted in their entirety, but we couldn’t do that. Sometimes you have to walk.”

Politico: “A visibly deflated Trump began the press conference wrapping up his second summit with North Korean leader Kim Jong Un by talking about anything else. He riffed on the potentially nuclear crisis between India and Pakistan. The violent crackdown in Venezuela.”

Former New Jersey Gov. Chris Christie (R) told ABC News that one remark Michael Cohen made during his House Oversight Committee testimony should worry President Trump. Said Christie: “The words that he said today that would send a chill up my spine at the White House would be, ‘I am in constant contact with the southern district.’”

David Frum: “Michael Cohen’s testimony to the House Oversight Committee was uncontradicted. The former personal attorney of the president of the United States today accused him of a litany of crimes, improprieties, immoralities, and betrayals of national security. And not one Republican member of the committee breathed one word in defense of the leader of their party.”

“The attorney general for the District of Columbia has subpoenaed documents from President Trump’s inaugural committee, the third governmental body to delve into how the fund raised $107 million and spent it to celebrate Mr. Trump’s swearing in,” the New York Timesreports.

“The latest subpoena follows similar demands for documents by federal prosecutors in Manhattan and by New Jersey’s attorney general. The attorney general in Washington is a local official who enforces statutes governing the operation of nonprofit organizations like the inaugural committee.”

McCrae Dowless, the political operative who emerged as a central figure in the investigation into irregularities in North Carolina’s 9th congressional district, was arrested and charged with a series of charges related to his handling of absentee ballots in the 2016 general election and 2018 primary, WRAL reports.

“The interesting thing is that there hasn’t been one Republican yet who has tried to defend the president on the substance, and I think that’s something that should be concerning to the White House. Why are no Republicans standing up and defending the president on the substance?” — Former Gov. Chris Christie (R), in an interview on ABC News about the Michael Cohen hearings.

“Voters overwhelmingly think the forthcoming report prepared by Robert Mueller, the special counsel investigating foreign interference in the 2016 election and the Trump campaign, should be made public by the Justice Department, according to a new Politico/Morning Consult poll conducted amid rumors that Mueller may be preparing to wind up the probe.

“More than two-thirds of voters surveyed, 68 percent, say the report — which will go first to Attorney General Bill Barr and other department officials — should be made public. Only 10 percent say it shouldn’t be made public, and 22 percent are undecided.”

“The pointed reception at the GOP lunch raised further doubts among Senate Republicans that the administration will be able to hold down defections on a crucial vote to block the president in the coming weeks. ‘There was a lot of passion from some of our members. And I think there is some skepticism. People are just genuinely concerned that we’re doing the right thing,’ said one Republican senator, who requested anonymity to speak candidly.”

“Chicago will elect its first African-American female mayor after former federal prosecutor Lori Lightfoot and Cook County Board President Toni Preckwinkle won enough votes Tuesday amid a record field of 14 candidates to move on to an April runoff election,” the Chicago Tribunereports.

“It’s only the second time Chicago has had a runoff campaign for mayor.”

“How President Trump may have inflated and deflated his personal wealth is more than mere curiosity: It could be of keen interest to any authorities trying to figure out if he misrepresented himself to insurance companies and lenders,” Bloomberg reports.

“Former Trump fixer Michael Cohen attested to Trump’s shifting wealth valuations to lawmakers on Wednesday, bearing what he said were annual net-worth summaries prepared for Trump earlier this decade. Trump handed the summary with high valuations to lenders and journalists, Cohen testified. When it came to tax authorities, he lowballed.”

“If falsehoods went to financial institutions, that would provide fertile ground for prosecutors in New York.”