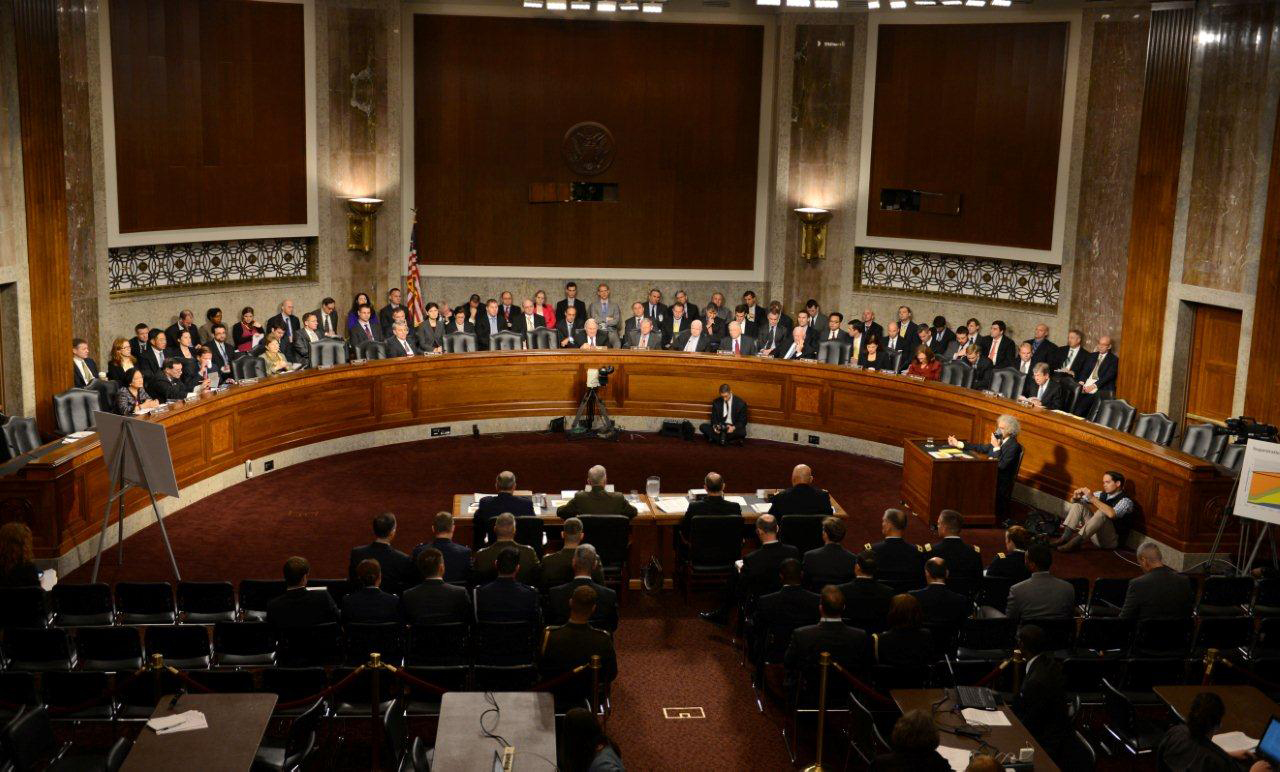 New York Times: “Among the most explosive and potentially damning aspects of Mr. Cohen’s testimony will be providing evidence of potential criminal conduct since Mr. Trump became president.”

Washington Post: “Cohen intends to paint Trump as a liar, a cheater and a racist during interviews with three congressional committees, two of which will take place behind closed doors. He is expected to share anecdotes about Trump’s behavior — Daniels alleged she had an affair with Trump years ago, a claim the president denies — as well as his financial dealings.”

Reuters reports Cohen will tell Congress that President Trump repeatedly asked him about a skyscraper project in Moscow long after securing the Republican nomination. “Cohen’s assertion that Trump was inquiring about the project as late as June 2016, if true, would show Trump remained personally interested in a business venture in Russia well into his candidacy. Cohen, scheduled to report to prison in May, has already said he briefed Trump on the project in June 2016… In addition, Cohen will offer new information on Trump’s financial statements that ‘have never been produced before’ relating to how Trump represented the values of his assets in financial transactions and other matters.”

The Washington Post reviews other questions Cohen may be asked.

Alex Ward: “A tentative deal between President Trump and North Korean leader Kim Jong Un to be finalized over the next two days at their summit in Vietnam has emerged — and while it may still change, the current agreement looks like a huge win for Kim. For the US? Not so much.”

“Under the current iteration of the agreement, described to me by three people familiar with the negotiations who spoke on condition of anonymity to discuss sensitive diplomatic issues, the US would agree to lift some sanctions on North Korea and improve ties between the two countries in exchange for a commitment from Kim Jong Un to close down a key nuclear facility.”

“In April, Israeli voters will head to the polls to elect a new government. Despite corruption charges, surveys have shown Benjamin Netanyahu’s Likud Party with a comfortable lead over the largely fragmented opposition,” the Washington Post reports.

“Yet in the past two weeks, Benny Gantz, a former Israel Defense Forces chief of staff with no political experience, has surged in the polls. After joining forces with Yesh Atid, Israel’s second-largest opposition party, Gantz has emerged as Netanyahu’s principal rival for leadership of the country.”

Politico says that Jared Kushner’s Middle East Peace Plan is dead on arrival: “Scant information is known about the contours of the long-percolating U.S. initiative. White House officials have kept mostly silent about the ‘deal of the century,’ as Trump once called it, perfunctorily dismissingmedia reports on its (alleged) components. Kushner’s original intention to confine his current discussions to only its economic aspects was bound to find little enthusiasm among his Arab interlocutors. That may explain why he raised the ante in an interview with Sky News Arabia on Monday, announcing that the program’s political dimension would focus on ‘resolving the border issue.’”

“In fact, there is slight chance of gaining any significant traction toward Israeli-Palestinian reconciliation at the present time. Israel is deep in the throes of an election campaign, where disinterested voters have relegated the Palestinian issue conspicuously to the back seat.”

A new Morning Consult survey of Democratic primary voters finds Joe Biden leading the Democratic field with 29%, followed by Bernie Sanders at 27%, Kamala Harris at 10%, Beto O’Rourke at 7% and Elizabeth Warren at 7%. More interesting is a follow-up about who Democrats would choose as a second option:

Ron Brownstein: “The convergence of Democrats around the universal background check bill partly derives from the overwhelming public backing for the measure, which usually exceeds 80% support in polls. (The bill would close what’s called ‘the gun show loophole’ by including such venues, which are now exempt, in the requirement for background checks on all guns sold through licensed dealers.) But the Democratic consensus also reflects a larger shift in the party whose implications extend far beyond issues relating to guns.”

“Compared with the 1990s or even the early 2000s, House Democrats today are far less dependent on districts with large numbers of culturally conservative blue-collar and rural voters. Instead, the party’s new majority is centered on urban and suburban districts that are either racially diverse, well educated, or both.”

A new Wason Center poll finds that having an Independent candidate in the 2020 presidential race dramatically improves President Trump’s chances of reelection. Key findings: “In a head-to-head match-up of the 2020 general election, Trump trails a generic Democratic Party nominee among likely voters by 11 points, 37% to 48%, with 9% of voters undecided.”

“With an Independent in the race, the election becomes a statistical tie between Trump and his Democratic Party rival, 34% to 32%, with 16% going to the Independent and 16% undecided.”

“An analysis of voters who selected the Independent option after initially selecting Trump or the generic Democrat reveals that for every voter Trump loses, the Democrat loses 5.”

President Trump “is on the verge of a bipartisan rejection of his emergency declaration at the border in what would be an embarrassing rebuke by a Congress opposed to his immigration agenda,” Politicoreports.

“Sen. Thom Tillis (R-NC) on Monday night said he would join Republican Sens. Lisa Murkowski of Alaska and Susan Collins of Maine, along with 47 Senate Democrats to block Trump’s attempts to secure billions for his border wall after lawmakers effectively stiffed him. Now just one more GOP senator’s support for a resolution to block Trump’s bid would send the measure to Trump’s desk and force a veto.”

“The House on Tuesday passed a resolution to overturn President Trump’s declaration of a national emergency on the southern border, as majority Democrats painted an apocalyptic portrait of a lawless chief executive out to gut the Constitution,” the Washington Post reports.

“The 245-182 tally was mostly along party lines, with 13 Republicans defecting to side with Democrats on a vote that effectively became a test of GOP loyalty to Trump. Despite their frequent complaints of executive overreach during the Obama administration, most Republicans fell in line with Trump’s decision to try to circumvent Congress to get billions of dollars for his border wall.”

“The House Judiciary Committee believes it has evidence that President Trump asked Matthew Whitaker, at the time the acting attorney general, whether Manhattan U.S. attorney Geoffrey Berman could regain control of his office’s investigation into Mr. Trump’s former lawyer and his real-estate business,” the Wall Street Journal reports.

“There is no sign Mr. Whitaker acted on any request from Mr. Trump, which the New York Times reported last week. But the House Judiciary Committee is investigating whether Mr. Whitaker may have perjured himself in his appearance before the panel earlier this month.”

Barry Ritholtz: “Before we determine who killed Amazon’s HQ2, let’s note who did not: It was not the progressives or the Anti-ICE lefties. No, the Socialists have not taken over America. The biggest opponent to Amazon HQ2 in NYC was not from the new Congressional class, all they did was make some noise, and little to do with what actually mattered. It was not, to the chagrin of Fox News, AOC or Elizabeth Warren, or anyone else in Congress. All of the incentives for this were State + City, not Federal. Congress literally had no say on this.”

“Spoiler alert: It was Jeff Bezos. He belatedly realized the political landscape had changed, and decided he was unwilling to engage further. He did not want to deal with it or be embarrassed. Full stop.”

Washington Post: “May told lawmakers that if Parliament next month rejects her Brexit deal again, the lawmakers will be given a vote on whether to ask the European Union to allow Britain to remain a part of the trading bloc for several more months. May said that if such an extension were triggered, it would likely be granted only once and that the time would be ‘short and limited.’ She suggested an extension until June would be possible, so as not to collide with upcoming elections for the European parliament.”

“This was a major concession by May, who has insisted that not only is her Brexit deal the best and only one on offer, but that it would be reckless to delay leaving the European Union beyond March 29. … Now May is offering compromise in a series of possible votes, each one based upon the results of the one before.”

“The U.S. military blocked Internet access to an infamous Russian entity seeking to sow discord among Americans during the 2018 midterms, several U.S. officials said, a warning that the group’s operations against the United States are not cost-free,” the Washington Post reports.

“The strike on the Internet Research Agency in St. Petersburg, a company underwritten by an oligarch close to President Vladi­mir Putin, was part of the first offensive cyber campaign against Russia designed to thwart attempts to interfere with a U.S. election.”

Sen. Kamala Harris (D-CA) told The Root that she supports the decriminalization of sex work nationwide. Said Harris: “I do not believe that anyone that hurts another human being or profits off of their exploitation should be…free of criminal prosecution. But when you’re talking about consenting adults? Yes, I think you have to really consider that we can’t criminalize consensual behavior as long as no one is being harmed.”

“In major shake-up to Bernie Sanders’ just-launched presidential bid, some of his top strategists have left the campaign,” NBC News reports.

“Tad Devine, Mark Longabaugh and Julian Mulvey, colleagues in a political consulting firm who all played leading roles in Sanders’ 2016 campaign for the White House, are parting ways with the senator, citing creative differences.”

“One day before Michael Cohen appears before the House Oversight Committee, Rep. Matt Gaetz (R-FL), a conservative firebrand from Florida and a White House ally, accused President Trump’s former lawyer of straying from his marriage and suggested that his wife would leave him once he goes to prison,” the Daily Beast reports.

Tweeted Gaetz: “Hey Michael Cohen – Do your wife & father-in-law know about your girlfriends? Maybe tonight would be a good time for that chat. I wonder if she’ll remain faithful when you’re in prison.  She’s about to learn a lot…”

Gaetz later insisted to Alex Ward that he was not witness tampering: “I’m witness testing. We still are allowed to test the veracity and character of witnesses, I think.”