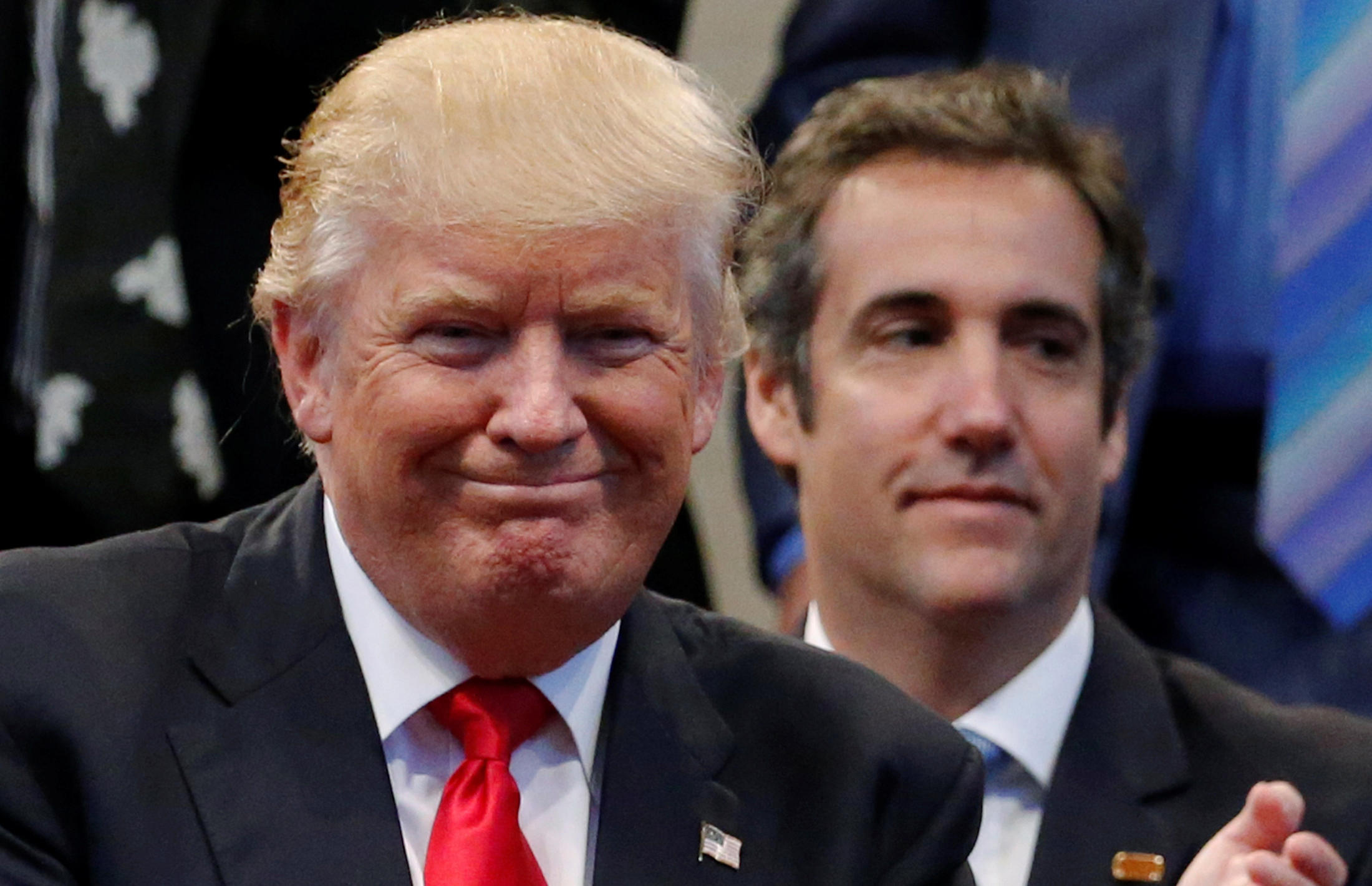 “Even by the combustible standards of Donald Trump, the spectacle set to unfold around his presidency in time zones 12 hours apart in the next few days could defy description,” CNN reports. “On one side of the planet, Michael Cohen, the President’s former personal lawyer, is expected to dish dirt in a congressional hearing on Trump’s turbulent personal and business affairs that are becoming an increasing legal and political threat.”

“On the other side in Vietnam, Trump will be pursuing a Nobel Peace Prize, convening a second summit and media extravaganza with North Korean tyrant Kim Jong Un that will take place despite a lack of genuine progress since their first encounter.”

Said Rosenstein: “The guidance I always gave my prosecutors and the agents that I worked with during my tenure on the front lines of law enforcement was: If we aren’t prepared to prove our case beyond a reasonable doubt in court, then we have no business making allegations against American citizens.”

Chairman Adam Schiff was not having it.

In 2016, then-FBI Director James Comey publicly discussed Hillary Clinton’s use of a private email server while simultaneously recommending against criminal charges for Clinton. Then the DOJ and the FBI produced thousands upon thousands of documents to the Republican Congress about that investigation. They will do the same here, by force if necessary.

Said Yellen: “Well, I doubt that he would even be able to say that the Fed’s goals are maximum employment and price stability, which is the goals that Congress have assigned to the Fed. He’s made comments about the Fed having an exchange-rate objective in order to support his trade plans, or possibly targeting the U.S. balance of trade. And, you know, I think comments like that shows a lack of understanding of the impact of the Fed on the economy, and appropriate policy goals.”

Sen. Elizabeth Warren (D-MA) “campaign says she is forgoing traditional private fundraising dinners and receptions during her 2020 presidential primary bid, instead offering ‘equal access’ to anyone who backs her,” the Wall Street Journal reports.

CNN: “Warren’s bid for the White House has been defined since its start by themes of fighting corruption and money in politics. The Massachusetts Democrat took that to the next level on Monday, blasting out an email to supporters vowing to forgo any ‘fancy receptions or big money fundraisers only with people who can write big checks,’ as well as phone calls to wealthy donors.”

“If you don’t want to get re-elected, you’re in the wrong business.” — Sen. Lindsey Graham (R-SC), quoted by the New York Times, explaining how he went from Trump skeptic to Trump sidekick.

“Britain’s opposition Labour Party said on Monday that it was prepared to support a second referendum on withdrawal from the European Union, a shift that could have significant ramifications for the fate of Brexit and for the country’s future,” the New York Times reports. “After the resignations of nine Labour Party members last week, and amid the prospect of more, the party’s leader, Jeremy Corbyn, dropped his longstanding resistance to a second vote on leaving the bloc.”

A new PRRI poll finds 21% of Americans say that they seldom or never interact with someone of a different race or ethnicity. But that number is much different depending on demographic groups:

First Read: “For all the talk about urban elites living in a bubble — and we get it — don’t forget about that other bubble of a not-insignificant share of Americans who rarely encounter someone different than themselves.”

“A staffer on Donald Trump’s 2016 presidential campaign says he kissed her without her consent at a small gathering of supporters before a Florida rally, an interaction that she alleges in a new lawsuit still causes her anguish,” the Washington Post reports.

“In interviews with The Washington Post, and in the lawsuit, Alva Johnson said Trump grabbed her hand and leaned in to kiss her on the lips as he exited an RV outside the rally in Tampa on Aug. 24, 2016. Johnson said she turned her head and the unwanted kiss landed on the side of her mouth, which she called ‘super-creepy and inappropriate.’” Said Johnson: “I immediately felt violated because I wasn’t expecting it or wanting it. I can still see his lips coming straight for my face.”

Ronan Farrow notes the lawsuit is the latest challenge to Trump’s insistence on having staffers sign non-disclosure agreements.

President Trump started his Monday by blasting director Spike Lee as “racist” against him in an early morning tweet following Sunday night’s Oscar ceremony, NBC News reports. Said Trump: “Be nice if Spike Lee could read his notes, or better yet not have to use notes at all, when doing his racist hit on your President, who has done more for African Americans (Criminal Justice Reform, Lowest Unemployment numbers in History, Tax Cuts,etc.) than almost any other Pres!”

“A bipartisan group of 58 former senior national security officials will issue a statement Monday saying that ‘there is no factual basis’ for President Trump’s proclamation of a national emergency to build a wall on the U.S.-Mexico border,” the Washington Post reports.

“The joint statement, whose signatories include former secretary of state Madeleine Albright and former defense secretary Chuck Hagel, will come a day before the House is expected to vote on a resolution to block Trump’s Feb. 15 declaration.”

Further, twenty three former Republicans members of Congress have penned a letter, urging legislators to “pass a joint resolution terminating the emergency declared by the President.”

“With North Korean leader Kim Jong Un on an armored train barreling through China toward Vietnam’s capital, and U.S. President Donald Trump about to board a jet for Hanoi, Vietnamese officials scrambled Monday to finish preparations for a rushed summit that will capture global attention,” the AP reports.

“Officials in Hanoi said they had about 10 days to prepare for the summit — much less than the nearly two months they said Singapore was given for the first Trump-Kim meeting last year— but still vowed to provide airtight security for the two leaders. … Nguyen Manh Hung, the leader of the information ministry, said the 3,000 journalists from 40 countries expected in Hanoi could rely on his agency as ‘you’d count on a family member.’”

Yahoo News: “A weekend swing through the Des Moines area — in preparation for next year’s Iowa caucuses, now a mere 11 months away — highlighted Harris’s strengths and weaknesses as a candidate.”

“Comfortable in crowds, she is capable of soaring rhetoric, even if that rhetoric is perhaps not quite of the same caliber as that which Obama displayed in 2008. But in more intimate settings, she sometimes avoided specifics, leaving some Iowans unsatisfied.”

“Late last month, more than 100 major Republican donors gathered at the Trump International Hotel for a presentation from the president’s campaign manager Brad Parscale and other top political hands on their plans to keep the White House in 2020 after a brutal midterm election,” Politico reports.

“But several of the GOP contributors left the two-day retreat in Washington dissatisfied, dogged by essentially the same concern: The president doesn’t really have a strategy to win reelection.”

“They are chiefly worried about how he intends to prevail again in the Rust Belt states that voted for Trump in 2016, but where Democrats performed strongly in last year’s midterms. But there are also concerns about whether the president’s fundraising apparatus is up to the task, and whether Trump will trample on any strategy or message the campaign does develop, as he frequently does.”

“Questioned in court last week about his recent Instagram post featuring a photo of the judge presiding over his case with what resembled a crosshairs symbol, Roger Stone said under oath that a ‘volunteer’ found the image. He insisted he couldn’t recall who exactly, though, and struggled to identify the five or six people he said were serving as his volunteers at the time,” BuzzFeed News reports.

“The names he offered after being pressed by the prosecutor underscored Stone’s ties to the Proud Boys, a far-right, men-only extremist group that describes its members as ‘Western chauvinist.’ The four men identified by Stone are all active on social media, and several continued to post about Stone’s case after U.S. District Judge Amy Berman Jackson imposed a strict gag order Thursday — an order that limits not only what Stone can say in public and online, but what his surrogates and volunteers can say on his behalf.”